On the historical origins of democracy and "democracy"


Where the state-forming ethnos lived in the traditional for most ancient ethnic groups bloodline community with an extremely rigid hierarchy of all members of the community in relation to its elder head, there the state institutions were built in exactly the same rigid vertical and hierarchy in relation to the head of state of all other public institutions authorities and officials. 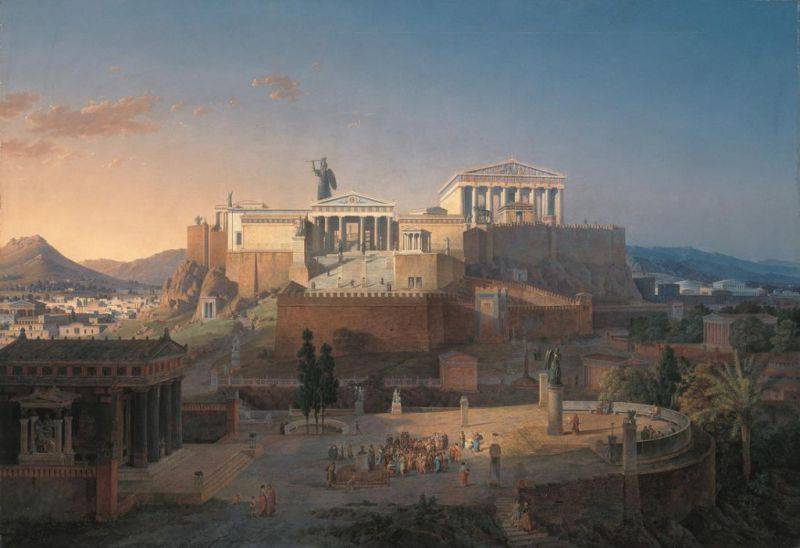 Athenian Acropolis. Reconstruction
Similar examples in stories humanity is more than enough. For example, according to this principle, power was built in ancient Egypt, in all the Eastern Despotisms of Between-rivers, the Mongol Empire, etc. Where the state-forming ethnos lived in the conditions of a territorial or neighboring community (“brand community”), where the need to harmonize the various interests of all equal members of the community inevitably arose, power was initially based on the principles of true democracy, that is, its periodic election, accountability and turnover naturally, without any noisy campaigning campaigns and election shows, but essentially.

In the early history of mankind, examples of the second kind of organization of power, that is, the coordination of the interests of the “Earth” (society) and “Power”, were not many, but they still existed. The most typical example of such an organization of power is the ancient Greek polis - small in size and in number city-state, which included the city itself and its rural district. However, it should be noted that the ancient Greeks did not immediately come to this form of organization of power, but through the crucible of “royal power” in the Mycenaean period (XVI – XI century BC) and the era of “dark ages” (XI – IX century .e.), when the same blood-related community prevailed. The formation and flourishing of the ancient Greek polis fell on the archaic (VIII – VI century BC) and classical (V – IV century BC) periods of the history of Ancient Hellas, when the hereditary relations of the ancient Greeks faded into the background. 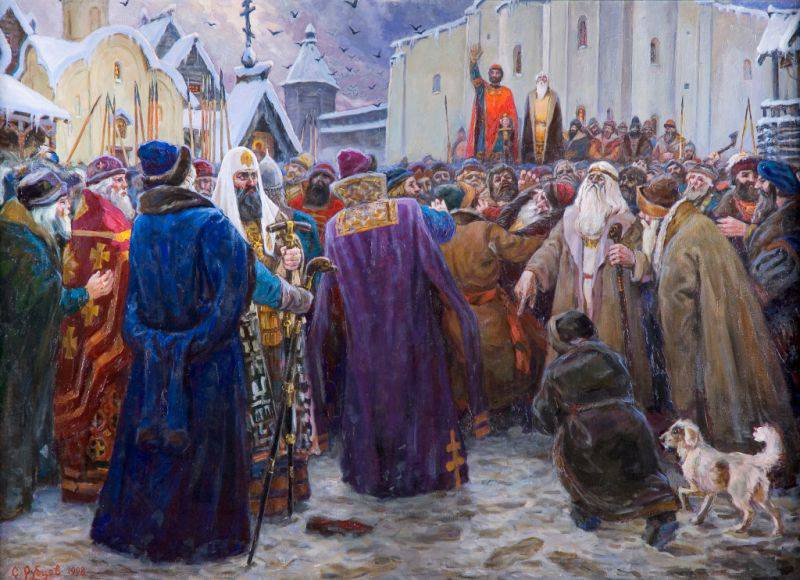 Novgorod veche. Hood Sergey Rubtsov
Contrary to the endless wailing of overseas and home-grown "liberals" and "democrats" about the ancient and centuries-old slavery of the Russian people, a similar type of power organization existed in Ancient Russia, especially in the pre-Mongolian period. Moreover, it is important to note the fact that the overwhelming majority of Soviet and modern Russian historians, being in the “captivity” of Friedrich Engels' well-known provisions about the German bloodline community and its further transformation into the neighboring community, or “brand-community”, absolutized this process and spread the position similar phasic community on all the most ancient peoples of Europe.

However, by the time of the collapse of the single Slavic ethnos, the Eastern Slavs had long since passed the stage of “wildness” and, unlike the neighboring Germans and steppe inhabitants, lived within the framework of a neighboring (territorial) community, which was based not on a large but on a small family. This fundamentally different view of the Slavic community is confirmed by a number of reliable historical facts, in particular: 1) the existence of at least two anthropological types within the East Slavic ethnos; 2) the small size of dwellings in all known and accurately established Slavic archaeological cultures; 3) by the long absence of generic Slavic genealogies, characteristic, for example, for the same Germans who lived for a rather long time in a consanguineous community; 4) Slavic polygamy in the pre-Christian era, etc.

It is well known that all the ancient Russian chronicles are full of rich information that the “Kyans”, “No-townspeople”, “Galicians”, “Rostovites” and other townspeople “pointed the way” to one or another prince who violated “a number of "(Contract) with the city community. For example, in 1136, the Novgorodians “pointed the way” to the coward prince Vsevolod Mstislavich, in 1146, a similar incident happened to the great Prince of Kiev, Igor Olgovich, and in 1188, the Galicians drove out their lecherous Prince Vladimir Yaroslavich. Moreover, we note that such a practice of expelling Russian princes by the decision of city councils was a widespread phenomenon not only in Novgorod or Pskov, which everyone probably knows about, even in all ancient Russian volosts, and then in the lands (principalities) of the Ancient Rus, where princely tables existed.

Moreover, this tradition of veche democracy has been preserved in the Russian lands during the post-Mongolian period, since it is well known that, for example, only Grand Duke Dmitry Donskoy (1359 – 1389) managed to crush the “Earth” in the person of Moscow’s actual owners, thousands of Moscow the boyars of the Velyaminovs, who from the time of his great-grandfather, the first Moscow-specific Prince Daniil Alexandrovich (1283 – 1303), held the elective office of the thousand and were the real counterweight to the Vlasti in the face of the Moscow princes in Moscow itself. 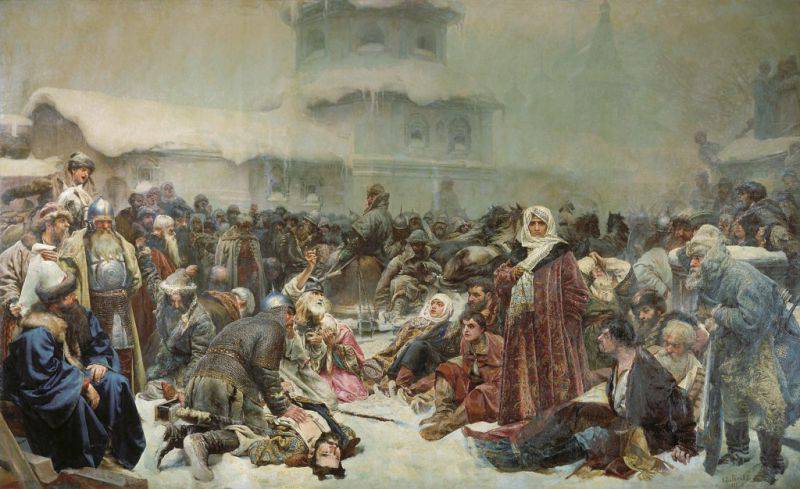 Marfa Posadnitsa. The destruction of the Novgorod veche. Hood Claudius Lebedev
With the development of the feudal mode of production and the emergence of the institution of feudal land tenure, the institution-estate, and then the absolute monarchy, with its extremely rigid class hierarchy and the absence of so-called social elevators for all other estates except feudal aristocracy and ancestral nobles, was established in almost all European countries. . In the heyday of absolute monarchies in Europe, when the path to state power was “ordered” to all representatives of the “mean” estates, the “best minds” of Europe, such as: Denis Diderot, Charles Montesquieu, Francois Voltaire, and other “titans of thought” of the Enlightenment, who were generously financed by the most unscrupulous representatives of these “meanest estates”, who were inexpressibly enriched at the “bank interest”, but who did not receive the coveted entrance ticket to power, painfully sought a way out of this vicious circle and finally found it! It is through the efforts of these “lights” of the then European thought that modern “Western democracy” was born with its ideas of “social contract”, “separation of powers”, “freedom of speech” and everything else that covers the true essence of this very “democracy”: “Who has the money , that and power! ".

At the same time, at the end of the 18th century, relying on these ideas of the Enlightenment, which had already mastered the masses of European intellectuals, the founding fathers of "experimental" public education called the North American United States (1776) and the world's first Constitution (1787), based on the idea of ​​a “social contract”. By the way, when the “uninitiated” American revolutionaries proposed putting the royal crown on the head of the first US President George Washington and calling him Washington I, their “dedicated” colleagues quickly explained to them that they should not do this.

Meanwhile their French associates, in particular, Camille Desmoulins, Emmanuel-Joseph Sieyes, Nicolas Condorcet Bernard Laseped Jean Bailly and Sylvain Dominique Gar continued their experimentation and soon "cooked" French Revolution (1789-1799), yavivshuyusya guiding light for “fiery revolutionaries” of all ranks and stripes, and their “brother” Joseph Guillotin became the inventor of the famous guillotine!
I am sure that every more or less educated person, of course, heard about the Union of the Russian People (NRC) and the notorious “Black Hundred”, which all small years of the Soviet government and Yeltsin hard times frightened even small children. Many historians and political scientists have long been haunted by the sacramental question of why the collapse of the NRC and other patriotic parties.

To some, our answer may seem paradoxical, but the Russian Black Hundreds was the first real attempt to build in the Russian Empire what is now called “civil society.” But it was precisely this that was absolutely not needed by either the imperial bureaucracy, neither the radical revolutionaries, nor the liberals-Westerners of all stripes. The Black Hundred should be stopped immediately, and it was stopped. 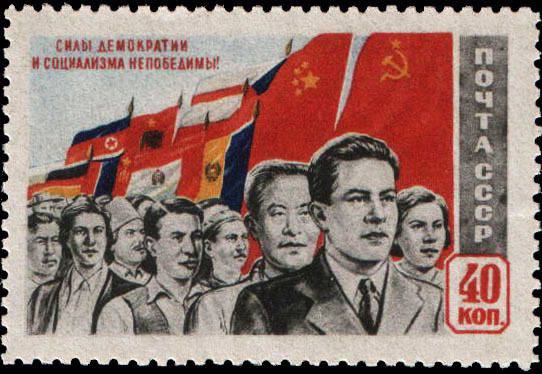 After all, it was not by chance that the most astute politician of that time, Vladimir Ulyanov (Lenin), wrote with a great deal of apprehension, but with amazing frankness: “In our Black Hundreds there is one extremely original and extremely important feature that has not received enough attention. This is the dark peasant democracy, the roughest, but also the deepest. ” The Black Hundreds had to be stopped because it was they: 1) who considered their main enemy to be not the Jews, but the corrupt Russian bureaucracy; 2) confessing “peasant democracy”, believed that the primary unit of local self-government was to make all-tribal parishes, not liberal zemstvos, where the dominance of high-ranking nobles and raznochintsy liberals was glaring; 3) the Black Hundreds believed that the ruling classes of the Russian Empire artificially created an impassable wall between the majority of the people and the monarch, therefore they dreamed of destroying this wall and creating an all-tribal state, without privileges for the oligarchic aristocracy and the bourgeoisie; 4) finally, the Black Hundreds sincerely defended precisely Russian national culture, and for the European-educated elite stratum of the Russian Empire, this was a question, to put it mildly, dubious.

In April 1918, the leader of the world proletariat and the head of the world's first working-class peasant state, Vladimir Ilyich Lenin, who had been tormented for over a year searching for the answer to the question “what should this state be like?”, Broke out with another theoretical masterpiece “Proletarian revolution and renegade Kautsky”. This Leninist volume is remarkable by the fact that it was here, extremely hard arguing with the leader of European revisionists Karl Kautsky, that he put all the points on “i” and absolutely correctly wrote: “If you don’t mock common sense and history, then it’s clear that you can’t say about "pure democracy", while there are different classes, but you can only talk about CLASS DEMOCRACY. "Pure democracy" is not only an ignorant phrase that reveals a lack of understanding of both the class struggle and the essence of the state, but also a thrice empty phrase ... "pure democracy" is a false phrase of every liberal ... and under capitalism it cannot but remain narrow, truncated, fake , the hypocritical form of the dictatorship of the big bourgeoisie ".

Within any state, and even more so huge as Russia, state power can and should be built solely on the principles of a different “democracy”, and the question of what kind of democracy this will be should be the subject of the most serious public debate. Otherwise, we will never find a real balance of interests between “Earth” and “Power”. This is a question of the future development of civilization, whose roots are in the historical past.

Ctrl Enter
Noticed oshЫbku Highlight text and press. Ctrl + Enter
We are
The value of ambush in the Mongolian strategy and tactics of warfare. Part of 2Help the steppes. Mongols are loyal allies of the USSR in the Great Patriotic War
Military Reviewin Yandex News
Military Reviewin Google News
27 comments
Information
Dear reader, to leave comments on the publication, you must to register.