November 10 2015
3
According to the certificate of the Order of the Order, the ancestor of the Rumyantsev family is a certain Vasily Rumyanets, a very agile and enterprising husband. He is known as an accomplice of the Grand Duke of Moscow Vasily Dmitrievich, the son of Dmitry Donskoy, when he conquered Nizhny Novgorod in the 1391 year. 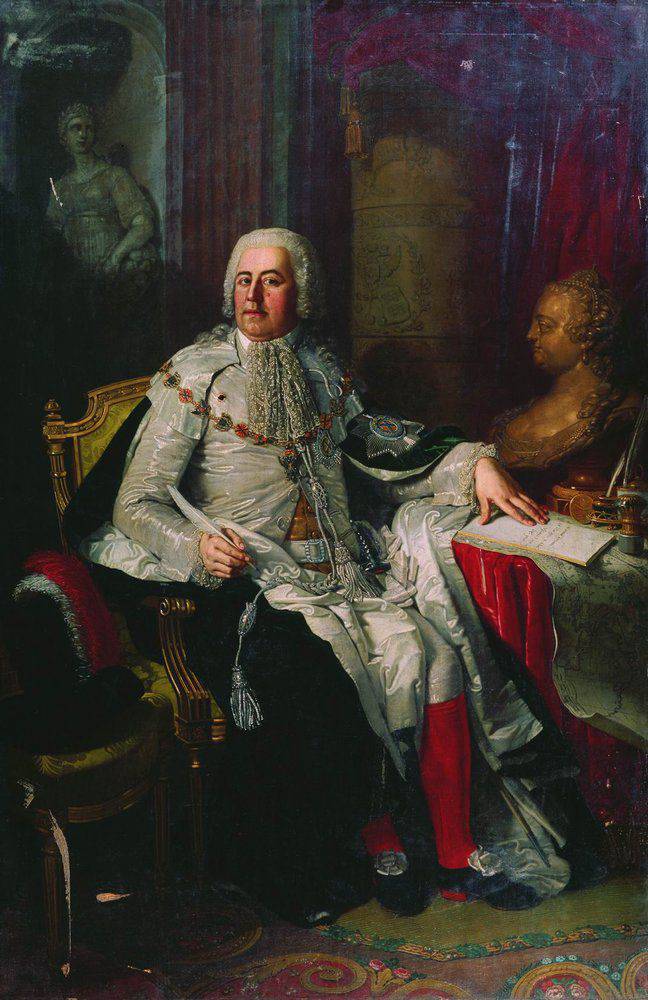 Alexander Ivanovich Rumyantsev
Prince of Moscow in the Horde asked for a label on the reign of Nizhny Novgorod. Vasily Rumyanets was a Nizhny Novgorod boyar and was in the service of Prince Boris. When the warhorses squealed and a choice had to be made, Basil the Blush delivered his prince in time, and his lot was in the hands of Grand Duke Basil. The era of fragmentation, the era of the freemen of small principalities, ended.

At a time when Alexander Ivanovich Rumyantsev's husband, Tsar Peter Alekseevich tried to turn the Russian aristocracy into a military caste, the main values ​​of which are faith in the state and loyalty to the sovereign. As a young man, Alexander Rumyantsev joined the amusing troops, then served in the Preobrazhensky regiment, which became a guard. He participated in many battles of the Northern War: first of all we would call the victorious battles of Lesnaya and Poltava. As a diplomat and commander, he continued to serve the Fatherland even after the death of the first emperor.

The young Russian Empire constantly fought with four neighboring powers: the Crimean Khanate, the Ottoman Empire, Poland and Sweden. All these opponents in the second floor. The 18th century was not at the peak of military power, although each had its own weighty trump cards, quite (for the time being!) Comparable to those of Russia. Russia gained strength gradually, and the same Swedes sometimes glanced down upon the Russian army. The Russians were hindered by a long absence of an active monarch, constant intrigues around the throne. And yet the empire was strengthened, oppressed neighbors. 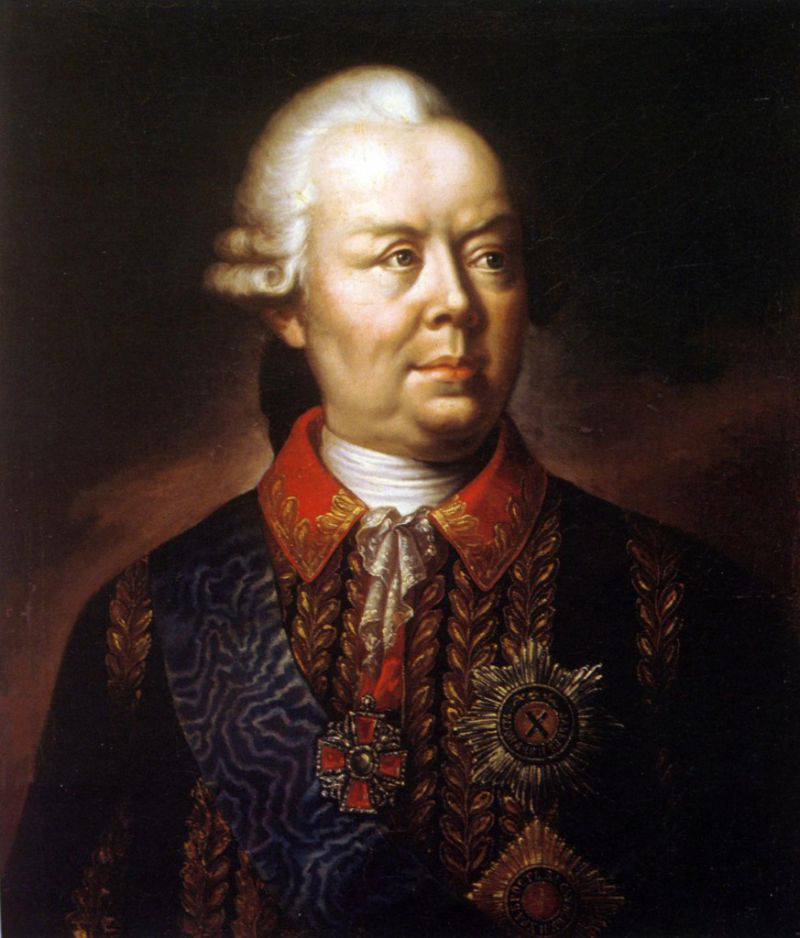 The more time passed from the day of Peter the Great’s death, the more doubts did the Swedes bring to the Swedes weapons the first Russian emperor. The Swedes considered the war with Russia to be inevitable and prepared in advance the regrettable conditions for a future peace treaty for Russia up to the transition of St. Petersburg under the rule of the Swedish crown. The Swedes knew that the Baltic fleet, which represented a formidable force in the times of Peter the Great, lost its combat capability. For many years in St. Petersburg there was no master, there was no strong hand: sheer female kingdom and crowned undergrasses who pursued a wasteful and non-government-oriented policy. In Europe, many believed that on such a political background, the Russian army was significantly weakened. In addition, the Swedish envoy in St. Petersburg, Eric Nolken, reported to Stockholm about the tangible losses suffered by the Russian army in the war with the Turks.

They underestimated the power of Russian weapons: even palace coups and court theft were not an obstacle for the army, which Peter the Great gave impetus to development.

Meanwhile, just the Swedish army after Charles XII lost its core. They prepared for war for a long time, but mostly in words. It was not possible to move quickly on the march. Faced with such sluggishness, the great Karl would no doubt fall into a rage. However, the Swedish treasury was exhausted just by the wars of the brilliant warrior king, and now they had to rely only on French subsidies. Paris, not interested in Russia's intervention in the wars for the Austrian inheritance, sought to kindle the flames of hostility between Stockholm and St. Petersburg. 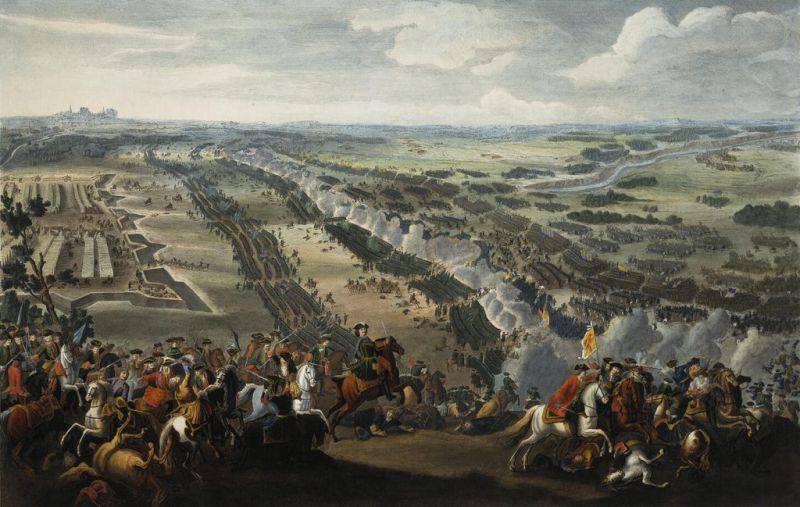 Only in July, 1741-th Sweden declares war on Russia, setting a strange reason: the murder of diplomatic courier Malcolm Sinclair, who was carrying documents about the Swedish-Turkish allied and military offensive treaty. Unhappy Sinclair died in Silesia, and his death was not without reason attributed to the Russian spies, acting on the orders of Minich. By the middle of the years, the five-thousandth corps of Lieutenant-General Buddenbrock concentrated at Friedrichsgam, the three-thousandth General-Major Wrangel - at Wilmanstrand. Petersburg is within reach. In Stockholm, they decided fervently that a Swedish soldier was worth ten Russians, and with a ten-thousand army they thought to stir up the Russian Empire. In addition, among the warriors of Buddenbrock, there were many Finns who did not meet the expectations of the Swedish crown. When it comes to serious battles, the Swedes will transfer no more than ten thousand soldiers to the disputed territory. Even in troubled times of palace coups and short reigns, Russia could effortlessly mobilize a seventy thousand strong army to fight the Swedes, divided into four units covering various areas: Petersburg, Vyborg, Kronstadt, the Baltic States. The most powerful was the Vyborg group. It was with her that Field Marshal Lassi began the attack on the Swedish positions.

The troops approached the outskirts of the fortress Vilmanstrand. Nowadays there is the city of Lappeenranta - one of the largest in Finland, with a population of more than seventy thousand people. At that time there were no large settlements around the fortress. By that time, the town had been a stumbling block in the military disputes between the two powers for a hundred years.

There was a baptism of Rumyantsev, artillery drowned out his youthful ardor. After the battle, he remained a spoiler and a joker, but he felt like a man of the military and began to surrender to the service with his whole soul.

Lassi suggested that Wrangel surrender, but the enraged Swedes would shoot down the Russian voter-drummer. Lassi had only to begin shelling of Wilmanstrand, and he decided on this. After the cannonade - a fierce assault that lasted exactly an hour. The Russians captured the fortress and fought that day fiercely. The Swedes lost more than 4 thousand people killed, wounded and captured - as many as two thirds of the corps. The wounded Wrangel with all his headquarters was taken prisoner.

Lomonosov will respond to the first victory in the new war with loud verses:

In the 1742 campaign of the year, Field Marshal Lassi showed determination to arbitrariness, and Rumyantsev certainly remembered this daring military success. Petersburg urged the field marshal to stop the advance on the banks of the River Kyummen to build fortifications there. But Lassi was convinced that it was impossible to lose the opportunity to put a spectacular exclamation mark in the campaign, after teaching the Swedes an aggressive offensive from the sea and from land.

The Swedes finally gave the initiative: there was not enough resistance forces. Russian units with a battle occupy the fortress of Nyslott and without a fight - Tavastgus.
The army of Lassi unexpectedly quickly bypassed Helsingfors (Helsinki). For the corps of General Busket, which was located in Helsingfors, the retreat routes were blocked. At the same time, a squadron under the command of Vice Admiral Zakhar Mishukov blocked the city from the sea. General Lewenhaupt so bold Russian actions simply stunned. He was not going to die. The Swedes briefly endured the blockade: on August 24, without a fight, they capitulated. In this case, the Finns were asked to disarm and go home, swearing allegiance to the Russian empress. Most Finns agreed to such conditions. Together with the wounded and sick, eighteen thousand people surrendered.

Stockholm saw in the actions of the General betrayal. They talked about bribing, as well as the unreliability of the Finns. After the Helsingfors operation, seventeen-year-old Peter Rumyantsev received the rank of captain: he was enviably quick to produce not only his own courage and promptness, but also his kinship with General-in-Chief Alexander Rumyantsev. After all, it was Rumyantsev-father who took over the leadership of the conquered Finland, settling down in the Helsingfors residence. True, the post of governor-general was soon established, and he became General von Kampenhausen.

Eighteen-year-old captain Peter Rumyantsev terrified the senior officers with their antics. As if Gavrila Derzhavin composed a dashing song about him:

Used to dance, playfulness, laughter
In hop each other hug;
Now instead of these comfort
Chest, treat caress.
It is time to get rid of us
But just live
And drink:
Hooray! Hooray! Hooray!

Scooters! And the soldiers loved him for his courage and ability to supply well the company entrusted to him. Rumyantsev's soldiers always had enough bread and meat. At that time, his position was mainly supported by the authority of his father, who energetically set to work in Finland.

At the talks, Peter Rumyantsev was present as the father’s outhouse. The old diplomat was waiting for a favorable set of circumstances to push his son, and such a minute came. On August 7, the parties signed a contract, and young Rumyantsev rushed headlong to St. Petersburg with good news. He turned out to be a controversial courier: he got to the capital without delay. And soon he was "most graciously bestowed" in the colonels - immediately from the captains. Three ranks at once jumped Rumyantsev: second major, prime minister and lieutenant colonel.

How can you not remember the song of a much later time - from the repertoire of Leonid Utyosov: "And great-grandchildren gloriously teach stories a lesson, and the young colonels take the hood! ”. It seems to be no young colonels and can not be, but Rumyantsev, contrary to logic, received this high rank at eighteen. Soon he would take command of the Voronezh Infantry Regiment, and this assignment would be a serious challenge. “The peace was decided in Abov by the representatives of Russia, the generals, Count Alexander Ivanovich Rumyantsev and Baron von Lyuberas, and from Sweden by the senator Baron Tsederreyets and the State Secretary, Baron Nolken. With this world, Russia acquired the fortress of Nyslot and Kimengsgerd region, ”Peter Panin will remember about those events.

Elizaveta Petrovna did not stint on awards for the Rumyantsevs. Diplomatic efforts elder crowned count title. Hereditary, that is brilliant, his son also became the earl of the Russian Empire. The motto was chosen to be extremely suitable: "Not only weapons."

After all, the Rumyantsevs participated in battles and negotiations in this war. Aboskiy world turned the fate of Peter Rumyantsev: now he was at the same time a colonel and a count. Rumyantsev became brilliant. Well, in addition to the title, Peter Rumyantsev, who has matured in 1774, will receive the name “Zadunaisky” in the year, after loud victories over the Turks on the banks of the Danube ...

Ctrl Enter
Noticed oshЫbku Highlight text and press. Ctrl + Enter
We are
Dmitry Ivanovich Donskoy (on the 665 anniversary of the birth)Basil the Dark - a bloody oath-breaker or martyr?
Military Reviewin Yandex News
Military Reviewin Google News
3 comments
Information
Dear reader, to leave comments on the publication, you must to register.