November 8 2015
93
The November issue of Za Rulem publishes Vadim Klochkov’s article Without a Tower, which is a report on the BTR-MDM armored personnel carrier Rakushka. Our blog provides the text of this material.


Armored hull, tower, gun. On such grounds, even a pacifist understands that he faces a formidable military vehicle. But this, crazy - whether a box, or a box - on a crawler, that she can? 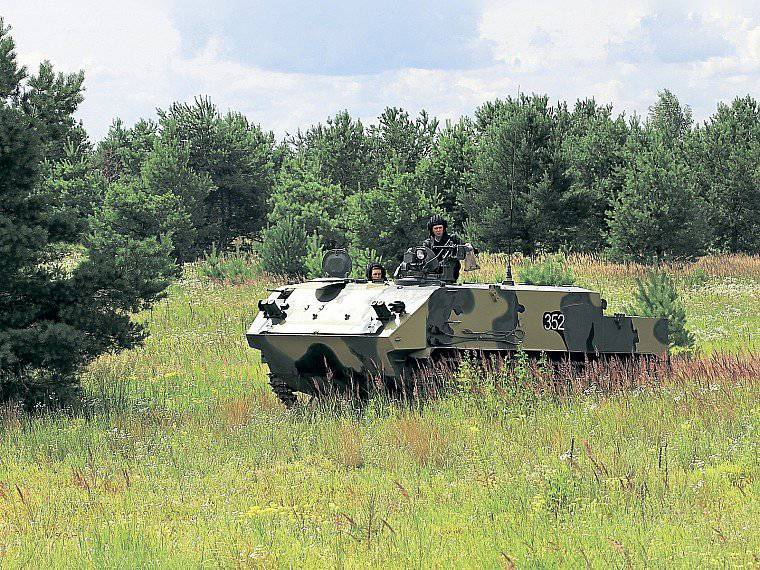 A combat vehicle named Shell made its debut at the May Victory Day parade, but got lost in the background tanks and missile systems. It's a shame! The latest development of our defense industry this year began to flow into the airborne troops.

In the military, there are not just famous people, but pillars. Modern airborne troops without exaggeration are built by the legendary “Batey” - Army General Vasily Filippovich Margelov. It was he who made the landing troops highly maneuverable, protected by armor and possessing sufficient fire effectiveness. With him, armored vehicles began to land with the crew inside. 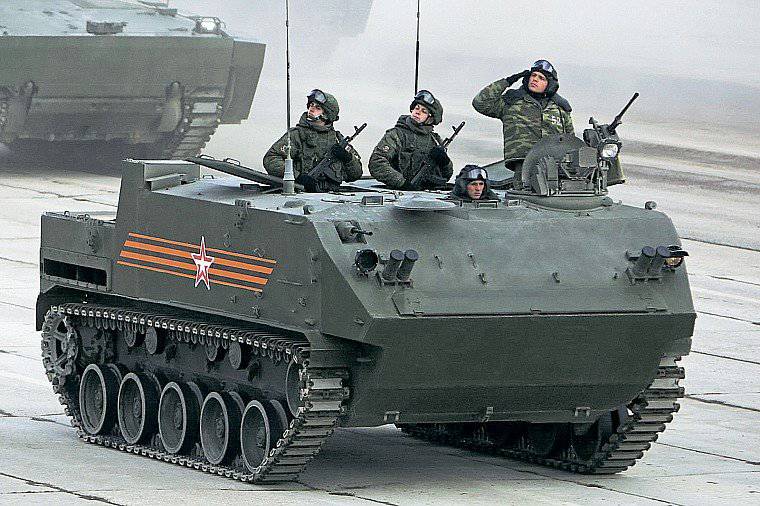 Margelovskaya ideology of the use of military vehicles still exists today. Three units of armored tracked vehicles, that is, a platoon, must be transported and paratrooped from one aircraft. Without going into details: this imposes a number of restrictions on the size and weight of the landing craft. The newly adopted BMD-4M, the classic combat vehicle with a turret and a cannon, corresponds to them. She takes on board three crew members and five paratroopers. On the platform unified with it, the Shell was also created. In the transport IL-76 also breaks three BTR-MDM. What has changed?
Minus tower with weapons, plus the number of seats. Two crewmembers and thirteen paratroopers can be accommodated in Rakushka! And that's not it. Transporter has a lot of talents. It can be not only an armored bus, but also a two-ton truck, medical, engineer or communication vehicle. Able to support the infantry with the fire of two machine guns, but frontal attacks are not his vocation. But it will take the fighters to the firing lines, bring up ammunition, evacuate the wounded. Combined actions of platform-based BMD-4M and BTR-MDM are perfectly suited for the implementation of the Margil concept of mobile connections.

The body of the conveyor is welded, the so-called log type. It consists of a department of control, a troop compartment and an engine compartment. Bulletproof armor. The engine is a multi-fuel atmospheric diesel UTD-29 with a capacity of 500 l. with. In the undercarriage, on each side, there are four supporting and five supporting rollers on pneumatic-hydraulic compressors. The working ground clearance is 450 mm, but it can be reduced to 130 mm or increased to 530 mm. What for? For example, a car can get into some transport planes, only thoroughly “sitting down”. 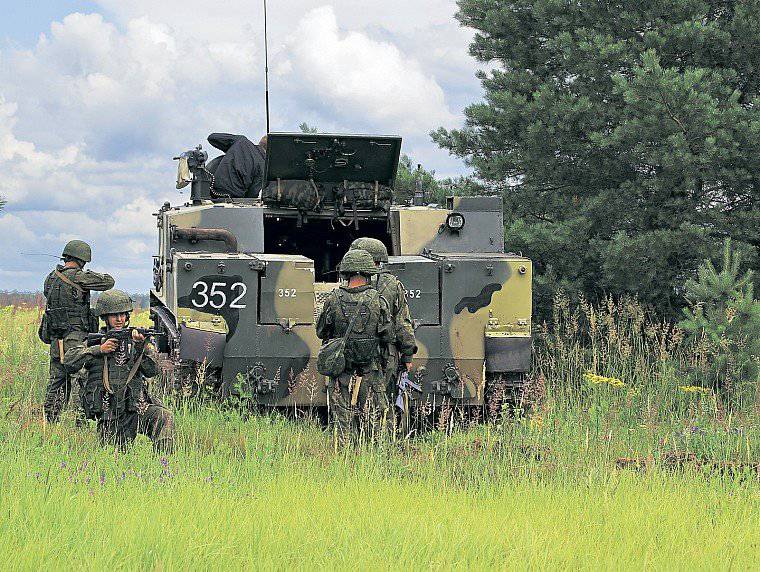 Inclined hatch in the aft of the cabin is open - I look into the bowels of the Seashell. How spacious is here! Usually, armored vehicles are large on the outside and small on the inside, while the new transporter is the opposite. I think the seats: yeah, thirteen in the troop compartment and four in front of the car. It turned out two more than stated in the passport data. Where are the extras? These are chairs for landing crew in the car. The commander and the driver land in them, and then transplanted to the regular seats. There are six hatches in the armored personnel carrier, but it’s easy to get from edge to edge from the middle compartment to the driver’s seat in the control compartment.

Least of all space from the commander. His chair is surrounded by instruments and optics, and the hatch is perhaps the narrowest. It is not surprising: next to it on the roof are the fastening elements of a remotely controlled circular shelling machine gun, aiming and instrument complexes and an illuminator. Another machine gun, course, installed in front of the right, in front of the seat of the paratrooper. It is also quite comfortable here.

The workplace of the driver is similar to that in the BMD-4M. Instead of the steering wheel - the steering wheel. Near the lever of a four-stage semi-automatic gearbox. Two pedals: gas and brake. The chair is easy to lift up to operate the machine, with his head in the open hatch.

In a combat situation (with the hatch closed), they are guided by three periscopic observation devices, and the central one, if necessary, is replaced by a night vision device. There are no analog devices in Rakushka. At the disposal of the driver a huge display of digital information and control system. All parameters - temperature, pressure, voltage, speed, speed, etc. - are displayed on a color LCD screen.

In the troop compartment on each side of the three double seats. They look rustic, but comfortable. It's nice that the knees of a tall man do not rest on the backs of the front seats. These seats can be folded to the sides. If you need to transport boxes of ammunition, barrels of fuel, spare parts and other goods, they are secured with belts. Along the sides - devices for fixing a stretcher with the wounded. Stretcher can be placed in three tiers.

In the shell there is an outdoor air cleaning system with a filtering unit. Importantly, the cabin does not leak the smoke of its own diesel. The engine compartment is well insulated from habitable compartments. 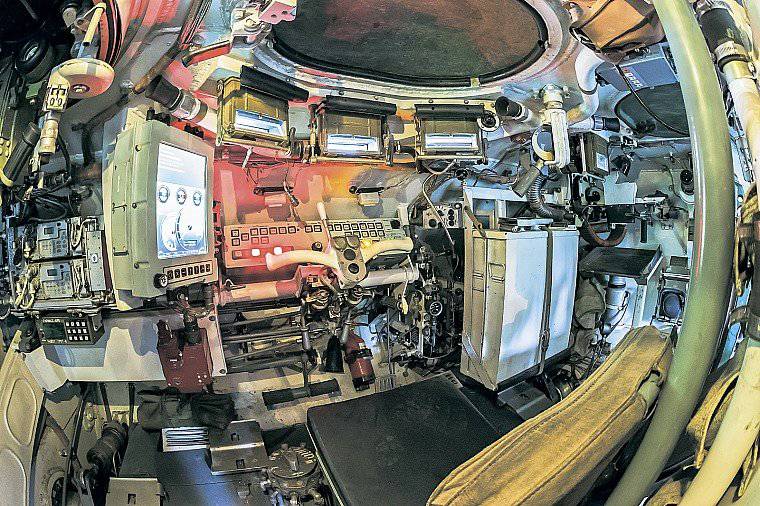 The BTR-MDM had a predecessor that was put into service in the 1974 year, an airborne carrier. Was considered a good machine and became the basis of countless modifications. It is curious that, unlike other Soviet armored vehicles, it was never exported. The novelty surpasses the old conveyor in all respects: it is better armored, the engine is twice as powerful. So the Shell has every chance of becoming an equally versatile and sought-after machine. The current commander of the Airborne Forces, Colonel-General Vladimir Shamanov, has announced plans to re-equip the paratroopers: by 2025, the troops should receive fifteen hundred new BMD-4М and two and a half thousand BTR-MDM. 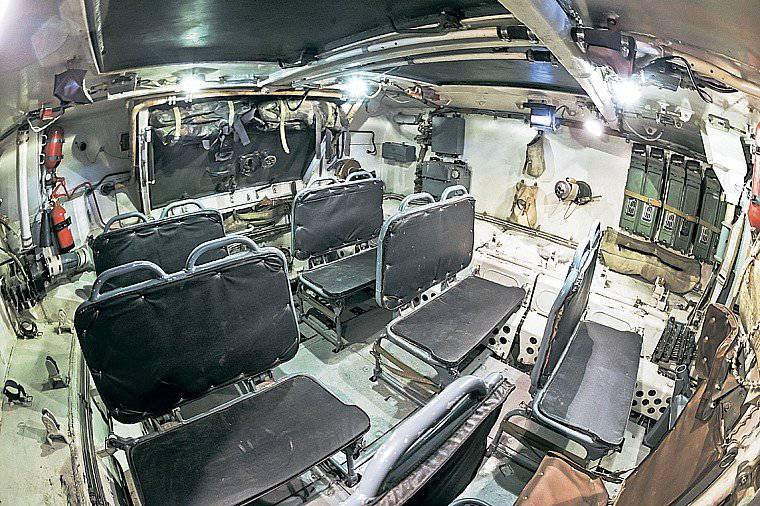