Russia and Iran: a new force in world politics

November 6 2015
70
Russia and Iran are using military force to achieve their goals in Syria, according to American analysts. Meanwhile, Rosoboronexport claims that Russia is supplying air defense and radio electronics to Iran. And the press service of the Almaz-Antey concern reports that the Iranian delegation got acquainted with the work of the new flight control center and highly appreciated the work of specialists. And the Russian-Iranian alliance is being strengthened ... by the Americans. 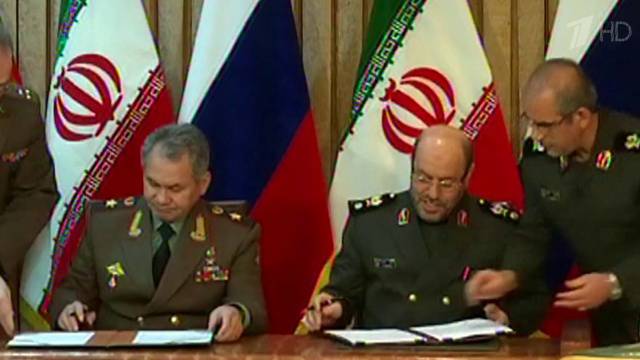 “The list of weapons banned to Iran does not affect a number of weapons - such as air defense weapons, some types of electronics. And it is precisely in these areas that the Russian Federation, through Rosoboronexport, makes contacts and delivers precisely these types of weapons to Iran, ”Isaykin said on the Russia-24 channel, the newspaper writes "Sight".

According to him, the negotiations of Russia and Iran on the line of military-technical cooperation continue.

Thursday this week RIA News" reported on the Iranian delegation’s visit to the Russian concern Almaz-Antey. This became known from the press service of the company.

“The guests were shown the work of the Moscow Center for Automated Air Traffic Control and its structural divisions. The Iranian delegation visited the new flight control center, where it got acquainted with the operation of the Sintez-AR4 air traffic management system of the Moscow Integrated Center of the Unified Air Traffic Management System of the Russian Federation, ”the press service noted.

In addition, the press service reported that “representatives of Tehran inspected the facilities of the Lianozovo Electromechanical Plant (part of the Almaz-Antey Air Defense Concern) and familiarized themselves with the company's products: route and airfield radar complexes, multi-position surveillance systems, as well as a number of other samples.

RIA "News»Reminds that Almaz-Antey is the main manufacturer and system integrator of equipment for the modernization of the Unified Air Traffic Management System of Russia. This concern also produces a wide range of air defense systems, including C-300 and C-400.

Analyst A. Antonovich (portal "Antifascist") lists the latest milestones of cooperation between Russia and Iran.

1. January 2015 of the year: the Russian Federation and Iran signed an intergovernmental agreement on military cooperation.

3. August. Iran withdrew a lawsuit in the Geneva court to Rosoboronexport about Russia's refusal to supply Iran with C-300 systems. These SAMs can "close the sky" over Iran by the beginning of 2017 of the year.

4. Iran and Russia now have a common enemy in the face of the "Islamic state", the struggle with which unites more firmly than the signed agreements.

The analyst believes that a military alliance has been formed between Iran and Russia. This is evidenced by a number of facts: in Baghdad, a focal point for the fight against ISIS was created (with the participation of Iraq and Syria); Iran allowed the passage of Russian cruise missiles through its territory (we are talking about those missiles that were launched in October by the Caspian flotilla RF on the positions of "IG"); Russia is lobbying Iran’s inclusion in the Syrian crisis negotiating group, etc.

We have already written above that the Russian military industrial complex cooperates with Iran. Probably, in the coming months and years, cooperation will be strengthened and expanded.

There is also the potential for economic cooperation. The October visit of the Minister of Energy of the Russian Federation Alexander Novak to Tehran, the columnist believes, can become a turning point in the economic relations of the two states. The minister noted that the parties agreed on projects for 40 billion dollars. The discussion concerned “communications, space, transport, energy development in the Islamic Republic of Iran, including the construction and modernization of thermal power plants, the construction of the power grid complex, railway infrastructure, supplies of Russian equipment, including our Superjet 100 aircraft, air and sea transport. ” Special attention at the talks was paid to the issues of the entry of Russian capital into the Iranian oil and gas sector and the implementation of projects for the construction of thermal power plants, as well as the Bushehr-2 and Bushehr-3 NPPs.

And where are the US looking?

In an editorial Washington Post from November 2, it is noted that the actions of the United States with respect to Syria in recent days not only failed to harmonize the strategy, but, on the contrary, showed a contradiction.

Secretary of State John Kerry in Vienna tried to reach agreement on a plan for a political transition in Syria, which would include the creation of a transitional government, the drafting of a constitution, and UN-controlled free elections. This broad idea received support, but Kerry’s proposal for the time frame during which Syrian President Bashar al-Assad would leave his post (from four to six months) was categorically rejected by Russia and Iran.

Mr. Kerry thinks that removing Assad from power will end the civil war and allow the Islamic State to be defeated. At the same time, he admits that the military measures announced Friday at the White House and involving the sending of a small number of special forces troops to northern Syria and an increase aviation forces in Turkey will not achieve this goal.

The publication welcomes any actions that will lead to increased US pressure on terrorists. However, the newspaper Obama considers additional steps insufficient. Even 100 million dollars intended for the next “non-lethal assistance of the Syrian opposition” will not save the situation. After all, the Syrian troops receiving American military support do not necessarily fight against the Assad regime and do not even necessarily share the political goals of reunifying the country, approved by the Vienna Conference, whose decision leaves the country's “state institutions” unchanged. For example, Syrian Kurds, who have a de facto truce with the regime, are trying to "carve out their own autonomous territory."

Well, and most importantly: Russia and Iran with the help of those military forces that they sent to Syria, achieve their political goals, including the preservation of the Assad regime "for an indefinite period."

The newspaper accuses Obama of weakness: the president "refuses to approve measures that would allow more pressure on Assad." Meanwhile, the American military forces are trying to accomplish tactical tasks, the solution of which will probably lead to an interesting result: it will help the Russian-Iranian alliance to achieve its political goals!