November 6 2015
30
In Europe, dissatisfaction and frustration with American politics and President Obama personally is growing. The factor of irritation of Europeans was the erroneous policy of Washington towards Russia. Obama was guilty of trying to bring Russia down to the level of a regional power, thereby humiliating it. Such an attempt was called one expert "unintelligent." 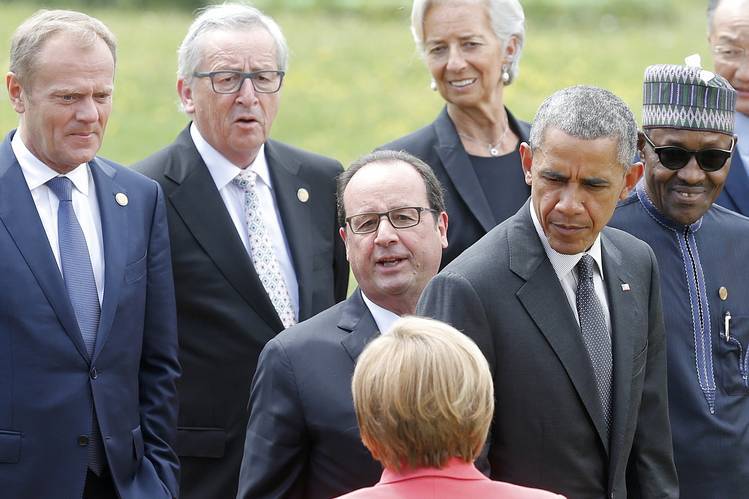 Mr. Vinokur indignant: Barack Obama promised to isolate Russia in geopolitics, to make her an “outcast”. However, everything turned out the opposite: the struggle of Russia against the "Islamic State" turned all Obama's statements and slogans into a miserable mischief.

And someone else talked about the overthrow of Putin! This is really funny. In Russia, the same Putin rules. He acts in Ukraine, he does business in Syria, and against this background the United States and the “democratic world” in general only demonstrate their inability to resist “injustice,” Mr. Winokur believes.

The weakening of “strategic trust” in the US president, as well as the big problems of Europe related to the influx of refugees from the Middle East, show in 2015 the “chronic impotence” of the European allies and of the whole West. We must speak about catatonia, the author believes.

But there is something new. News is that the Europeans are ready today to “put the blame on Barack Obama himself.” Politicians accuse him of flirting with Russia. Observers laugh at Obama's “infinite care.”

The pattern that still existed a couple weeks ago was broken by Ronald Pofalla, the former head of department of the Federal Chancellor Angela Merkel and the Federal Minister for Special Assignments.

Herr Pofalla is now co-chair of the Petersburg Dialogue Forum. This is a “semi-official German-Russian symposium”, which has resumed its activities, the author points out.

So, this Pofalla believes that B. H. Obama’s policy was “unwise” - where it was expressed in the “lowering” of Russia's role in the international arena. When Obama "lowered" the status of Russia to the level of a regional power due to the conflict in Ukraine, he acted "unwisely".

Such a statement needs interpretation, the American journalist believes. Mr. Pofalla publicly questioned the decision of the President of the United States and its possibilities. In addition, he considers plausible the opinion of the “humiliation” of Russia by Obama.

Things went further: this symposium welcomed Frau Merkel, thus making it clear that she wanted a “partnership” with Moscow and did not want “isolation” of Russia.

This is what happens? President of the United States in Europe do not put in anything? This is an open disrespect, the author believes.

The most harsh comments about Obama show that Europe does not know how to fight with Moscow. Yes, she can not fight, relying on the "protection of the American president." But he is also unlikely to “fight for all.” It was not for nothing that the German newspaper Frankfurter Allgemeine Zeitung laughed at Obama, hinting at his red lines left relating to Bashar al-Assad, saying that they blurred “to the lines of pink”. And in the Tagesspiegel, Obama was called an “indecisive and halfhearted” person who is no longer “afraid in the Middle East.”

In Paris, "Le Monde" published material in which one gentleman working in the field of human rights, spoke about the decisions of the US President in this way: they say, "your retreat", Mr. Obama, allowed Russia, Syria and Iran to forcibly intervene in the affairs of others countries.

Finally, the “slack in Mr. Obama’s power” is evident from the way the richest countries of the European Union are seeking rapprochement with Russia over energy supplies. If in 2009, then US Secretary of State Hillary Clinton called Europe’s energy deals with Moscow a “security challenge”, now companies from Austria, France, Germany and the Netherlands agreed with Gazprom to expand the potential of the Nord Stream, which put Ukraine and Poland in disadvantage. What kind of "isolation" is Russia! The European Commission already assumes an increase in the share of energy supplies of the already dominant Gazprom on the German market from 30% to 60%! And it was not for nothing that the Vice-Chancellor of Germany, Sigmar Gabriel, visited Moscow the other day.

Recently, the new chairman of the United States Joint Chiefs of Staff, General Joseph Dunford, declared that Russia is the largest strategic threat to America. So what? Should we hope now that Mr. Obama will immediately call Frau Merkel and complain about the increase in this “threat”?

In the year 2006, in the book The Audacity of Hope, Obama essentially expressed the interventionist version of US foreign policy. He wrote then that the United States should always play the role of a policeman in the world, take unilateral actions against immediate threats and even reject the priority of the UN Security Council over the corresponding decisions of the United States.

Today, according to John Vinokur, America’s closest allies can see that it was “just foam”.

Meanwhile, Barack Obama, this Nobel laureate, continues to play the role of “dove of peace,” we add.

Speaking at a fundraising event for the Democratic Party the other day, he said that international influence is measured not only by the number of missiles or occupied countries. “Power in the international arena is not measured only by how many countries we have occupied or how many rockets we used,” the American leader quotes. "Sight".

According to the President of the United States, "the strength of our diplomacy and the firmness of our commitment to protecting human rights," and the conviction that "we need to cooperate with other countries to solve major problems such as terrorism or climate change," is important.

In addition, Obama tried to be ironic, criticizing his Republican competitors.

“You have noticed that each of these candidates says:“ Obama is weak, Putin is splashing his eyes, and when I talk to Putin, will he correct? - Obama said at a Democratic Party event in New York on Tuesday night. “And then it turns out that they cannot cope with a handful of TV presenters on CNBC at the debates.”

“Actually, if you want to know, if you cannot cope with these guys, then I don’t think that the Chinese and Russians will be so worried about you,” the president said. RIA News".

No wonder that Forbes magazine on Wednesday this week call The most influential person in the world is not Obama, but Putin. The Russian president topped the rating for the third time.

Observed and commented on Oleg Chuvakin
- especially for topwar.ru
Ctrl Enter
Noticed oshЫbku Highlight text and press. Ctrl + Enter
We are
Results of the week. "He flew away, but promised to return!"Europe no longer believes in the “audacity of hope” (The Wall Street Journal, USA)
Military Reviewin Yandex News
Military Reviewin Google News
30 comments
Information
Dear reader, to leave comments on the publication, you must to register.