The US was afraid of the Chinese "blue men" 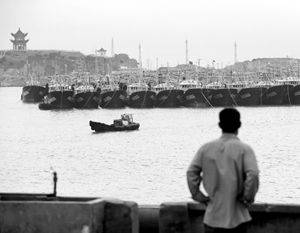 China used against the American destroyer "Lassen" detachments of the naval police, which have already been called "little blue men." Earlier, Beijing even managed to threaten Washington with a war for patrolling territories that the Chinese consider their own. So far, it has been decided to limit to distracting maneuvers, which, however, had an effect.


In Brezhnev times such an anecdote was popular: "The US shamelessly and brazenly interfere in the internal affairs of the USSR throughout the world." The USSR is long gone, but the United States still considers the whole world to be its inalienable interests: Syria, Afghanistan, Ukraine, the Baltic republics ... Thousands of kilometers from any of these countries to Washington, but the Americans actively influence the internal politics of each of them . Somewhere by military force, somewhere buying up the elite, somewhere combining methods.

“While Russian“ green men ”are widely known in the Crimea, insufficient attention is paid to the Chinese“ blue men ”

It is not a secret that the United States is much better at creating hot spots than trying to resolve conflicts. In fairness, we note that the USSR did it better too, for breaking is not to build. The Russian intervention in Syria, carried out in the fourth year of the civil war, is, of course, the opposite example - there can no longer be worse. However, the settlement of the Syrian conflict is still very far away.
The list of traditional hot spots in the near future may add another region - the South China Sea. And if the situation there still breaks out, it is largely due to the United States.

The Nanshi Islands, also known as the Spratlys, are an archipelago with a controversial status, claimed by China, Vietnam, Malaysia, the Philippines, Brunei, and also Taiwan. Of course, the main player is Beijing, whose position on the territories that it considers its own has always been very tough. After the end of the Second World War, China had border conflicts with India, Vietnam and the USSR - in all cases caused by disputing the status of territories that can hardly be called especially attractive. The same island Damansky, which for many years has spoiled the Soviet-Chinese relations, is a regularly flooded piece of land, the main value of which is floodplain meadows. Nevertheless, in Chinese it is called “Precious,” and the Chinese soldiers were ready to fight for it to the last drop of blood.

Spratly, at first glance, also do not bear their special value. There are no populations, ports or harbors. Until recently, their controversial status is not particularly worried about the applicant countries, they had questions and more important. As is often the case, everyone changed oil and gas. The total hydrocarbon reserves in the South China Sea, according to the China National Shelf Oil Corporation (CNOOC), are estimated at 125 billion barrels of oil and 14 trillion cubic meters. m of gas. The US Department of Energy, in turn, suggests that up to 5,4 billion barrels of oil and up to 55,1 trillion cubic meters of gas can be extracted in the waters of the disputed islands.

Of course, with such figures, Washington could not stand aside and give the countries - applicants to the islands the right to solve their dispute themselves. American ships and airplanes regularly appear in the area of ​​the islands, which causes protests from China. Beijing, however, is also not sitting idly; it is busy naming artificial islands in order to increase the size of the water area to which it can claim under international maritime law. This, of course, causes discontent of other countries.
According to Reuters, the US Navy intends to conduct its patrols twice a quarter through the territory that China already considers its own. All in order to "remind China and other states of the relevant US law international law."

To use military force “to remind of their rights” is very American, and, of course, denies other countries of this method of refreshing their memory.

However, according to a Defense News report, China seems to have figured out how to fight American military activity without engaging in direct conflict. We are talking about "blue men" - by analogy with the "green men", which in Russia is usually called "polite people".

When the American destroyer Lassen passed by the newly built Chinese island, he was accompanied by Chinese warships that behaved with restraint, the newspaper writes. But small vessels, looking merchant or fishing, behaved much more provocatively, crossed the course of the destroyer and maneuvered in close proximity to him.

Professor Andrew Ericson, professor at the US Naval College, remembered Crimea in this connection. “While Russian“ green men ”are widely known in the Crimea, insufficient attention is paid to Chinese“ blue men ”in the South China Sea, he noted. “This is very different from what the US is doing, and we don’t know how to resist it.”

Of course, people in unmarked uniforms are not Crimean know-how. But it is significant that any departure from the usual methods for the United States confuses the American military.

At the same time, it is not necessary that under the guise of fishermen the American destroyer was disturbed by special forces or disguised marines. The Chinese are for the most part patriots, so it may well be a matter of private initiative. But for some reason, Americans are urged to believe in private initiative only when it comes to euromaidan or other pro-Western public activity, and immediately begin to look for the Kremlin’s hand, or, in this case, Beijing’s hand, when someone opposes of them.

Military conflict in the South China Sea is not needed by any of the countries that claim to the islands and, first of all, Beijing does not need it. China’s supply of petroleum products goes through this area, and even after the construction of the Power of Siberia is completed, Russian deliveries will not be able to compensate for a break in shipping in this area.
Therefore, Beijing needs a peaceful solution to the issue. It is unlikely that Vietnam or the Philippines are also set to a military conflict.

The only force that can translate the cold war for the archipelago into a “hot phase” is the United States. But the “blue men” may well become an effective way to impede Washington’s military activity in the region.

Russia so far does not interfere in the conflict around the Spratly, and, probably, this is the most correct position at the moment, we do not need a quarrel with either Beijing or Vietnam, with which Moscow maintains very warm partnership. Only the goodwill of all the parties involved in the dispute can bring the countries claiming to the archipelago of the country to the negotiating table, and the external impact is unlikely to cause anything but harm.

But closely monitor how the situation develops, of course, necessary.