How the British "cleaned" Australia from the indigenous population 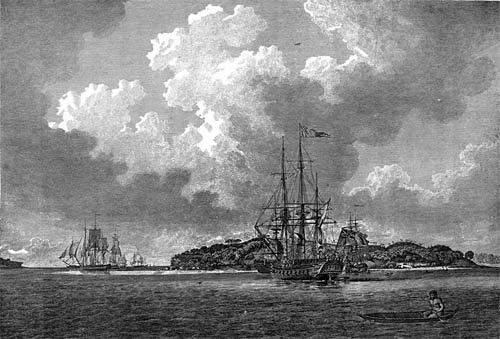 
In 1770, the British expedition of James Cook on the ship Endeavor explored and mapped the east coast of Australia. In January, 1788, Captain Arthur Philip, founded the Sydney Cove settlement, which later became the city of Sydney. This event was the beginning stories the colony of New South Wales, and Philip's disembarkation day (January 26) is celebrated as a national holiday - Australia Day. Although Australia itself was originally called New Holland.

First Fleet - name given the fleet Of the 11 sailing ships that sailed off the coast of Britain in order to establish the first European colony in New South Wales, he brought mainly convicts. This fleet marked the beginning of the transportation of prisoners from England to Australia, as well as the development and settlement of Australia. As the English historian Pierce Brandon noted: “Initially, some efforts were made to select convicts who possessed skills in various areas of English production for transportation. But this thought was abandoned because of the number of convicts. Behind bars on the Thames, there were so many wretched and deprived representatives of the human race that they threatened to turn rotting prison buildings into plague barracks - both figuratively and literally. Most of the convicts sent with the First Flotilla were young workers who committed minor crimes (usually theft). Some of them are from the category of "redneck" and even fewer "citizens" ... ".

It is worth noting that the British convicts were not inveterate killers, such in England immediately executed, without further ado. So, for stealing the perpetrators hung with 12 years. In England, for a long time even the vagrants, who were caught again, were executed. And after that, the Western press likes to remember the real and invented crimes of Ivan the Terrible, the Pale of Settlement in the Russian Empire and the Stalinist Gulag.

It is clear that such a contingent had to manage the appropriate person. The first governor of Australia, Arthur Philip, was considered a "benevolent and generous man." He proposed to transfer all those who were considered guilty of murder and sodomy to the cannibals of New Zealand: "And let them eat it."

Thus, the natives of Australia "lucky". Their neighbors were mostly British criminals, from whom in the Old World decided to get rid of. In addition, these were mainly young men without an appropriate number of women.

I must say that the British authorities sent prisoners not only to Australia. To unload the prisons and earn a fine coin (every person was worth the money), the British sent convicts and colonies of North America. Now the image of a black slave has taken root in the mass consciousness, however there were many white slaves - criminals, insurgents, those who were not lucky, for example, they fell into the hands of pirates. Planters paid well for the delivery of labor: from 10 to 25 per person, depending on qualifications and physical health. Thousands of white slaves were sent from England, Scotland and Ireland.

In 1801, French ships under the command of Admiral Nicolas Boden explored the southern and western parts of Australia. After that, the British decided to proclaim their formal possession of Tasmania and began to explore new settlements in Australia. The settlements grew on the eastern and southern coasts of the mainland. They then became the cities of Newcastle, Port Macquarie and Melbourne. English traveler John Oxley in 1822 explored the northeastern part of Australia, as a result of which a new settlement appeared in the Brisbane River area. The governor of New South Wales in 1826 created a Western-Port settlement on the southern coast of Australia and sent Major Lauchier to King George Strait in the southwestern part of the mainland, where he founded the settlement, which was later called Albany, and announced the extension of the British king’s authority to whole continent. The English settlement of Port Essington was founded at the extreme northern point of the continent.

Virtually the entire population of the new England settlement in Australia consisted of exiles. Their transfer from England every year went more and more actively. Since the foundation of the colony until the middle of the 19th century, 130-160 thousand convicts were transported to Australia. New lands actively mastered.

Where are the natives of Australia and Tasmania? By 1788, the indigenous population of Australia was, according to various estimates, from 300 thousands to 1 a million people united in more than 500 tribes. For a start, the British infected the Aboriginal people with smallpox, from which they had no immunity. At least half of the tribes that came into contact with aliens in the Sydney area died of smallpox. In Tasmania, the diseases brought by Europeans also had the most destructive effect on the indigenous population. Sexually transmitted diseases have led many women to infertility, and pulmonary diseases like pneumonia and tuberculosis, against which the Tasmanians had no immunity, killed many adult Tasmanians.

“Civilized” aliens immediately began to turn the local Aborigines into slaves, forcing them to work on their farms. Aboriginal women were bought or abducted, the practice of kidnapping children was formed with the aim of turning them into servants - actually slaves.

In addition, the British brought with them rabbits, sheep, foxes, other animals that violated the biocenosis of Australia. As a result, Australian Aborigines put on the brink of starvation. The natural world of Australia was very different from other biocenoses, since the mainland was isolated for a long time from other continents. Most species were herbivores. The main occupation of the Aborigines was hunting, and the main object of hunting - herbivores. Sheep and rabbits multiplied and began to destroy grass, many Australian species became extinct or were on the verge of extinction. In response, the aborigines began to try to hunt sheep. This served as a pretext for a mass "hunt" of whites for the natives.

And then with the aborigines of Australia happened the same as with the Indians of North America. Only the Indians, in their mass, were more developed and warlike, having put up more serious resistance to the newcomers. Australian Aborigines could not provide serious resistance. On the Australian and Tasmanian Aborigines, they organized raids, poisoned them, drove them into deserts, where they died of hunger and thirst. White settlers gave the aborigines poisoned food. White settlers hunted Aborigines like wild animals, not counting them as humans. The remnants of the local population were driven into reservations in the western and northern regions of the continent, the least suitable for life. In 1921, there were already only about 60, thousands of Aboriginal people.

In 1804, English settlers colonial troops launched a “black war” against the natives of Tasmania (Van Diemen Land). The natives were constantly hunted, hunted down like animals. By 1835, the local population was completely eliminated. The last surviving Tasmanians (about 200 people) were relocated to Flinders Island in Bass Strait. One of the last purebred tasmanias, Truganini, died in the year 1876.

"Nigger" in Australia are not considered as human beings. Migrants with a clear conscience poisoned the Aborigines. In Queensland (Northern Australia) at the end of the XIX century it was considered innocent fun to drive family "niggers" in water with crocodiles. During his stay in North Queensland in 1880-1884. Norwegian Karl Lumholz noted such statements of the local residents: “You can only shoot blacks - you cannot communicate with them in a different way”. One of the settlers noted that it was “cruel ... but ... a necessary principle." He himself shot all the men he met on his pastures, “because they are cattle killers, women — because they breed cattle killers, and children — because they are cattle killers. They do not want to work and therefore are not suitable for anything except how to get a bullet. "

Among the British farmers flourished trade in the natives. They were purposefully hunted. A government report for 1900 noted that "these women were passed from farmer to farmer," while "eventually they were not thrown away like garbage, leaving them to rot from sexually transmitted diseases."

One of the last documented Aboriginal massacres in the Northwest occurred in 1928. A missionary who wanted to understand the complaints of Aborigines became the witness of the crime. He followed a police detachment heading to an Aboriginal reservation at Forest River and saw the police seize a whole tribe. They captured the prisoners by building their heads in the back of the head, and then all but three women were killed. After that, the bodies were burned, and the women were taken to the camp. Before leaving the camp, they killed and burned these women. The evidence gathered by the missionary forced the authorities to launch an investigation. However, the police responsible for the massacre have never been brought to justice.

Thanks to such methods, the British destroyed in Australia, according to various estimates, up to 90-95% of all Aborigines.