Alliance of Moscow and Washington in Syria will not be

November 4 2015
28
Putin accepts Assad in the Kremlin. The United States and Russia have agreed to create direct channels of operational communication. The war in Syria will become increasingly fierce.


two news came almost at the same time: the United States and Russia agreed to create direct channels of operational communications to avoid accidents in the airspace over Syria. And Russian President Vladimir Putin is receiving Syrian leader Bashar Assad in Moscow. A start for the Russian-American coalition in the Syrian conflict? Thus, the solution in this war is approaching, and therefore, perhaps, the end of the migration crisis, which has become a serious test for Europe and especially Germany? No matter how! 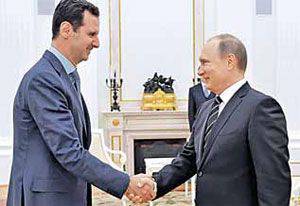 Because the solution to the migration crisis in Europe is not a priority either for Russia or for the United States. And for those, and for others, it is about maintaining their influence and upholding national interests in the Middle East. In domestic policy, the Kremlin wants to divert attention from the economic crisis in Russia with the help of a successfully staged military operation in Syria - in this sense, the fight against ISIS in Syria replaces the previously propagandized image of “fascists in Ukraine”.

In foreign policy, Russian influence in the Middle East is at stake, and there the Kremlin has relied on the preservation of power by the Syrian leader Asad. The fact that he, for the first time since the beginning of the civil war in Syria in 2011, went abroad and was adopted in Moscow by Putin, is a clear signal of such a policy of the Kremlin. Naive is the one who hoped that Putin would refuse to support Assad.

But the Russian Middle East policy does not end with Assad: Moscow actually joined the Shiite axis in the Middle East (Iran, Iraq, Assad Syria and Hezbollah in Lebanon) against Sunni forces in the region, which are located primarily in the countries of the Persian Gulf and IG controlled territories Iraq and Syria.

However, not only Russian, but also American policy in the Middle East was repeatedly incorrectly evaluated. According to the tradition of recent decades, it is often assumed that the United States will continue to show active military participation in the region.

However, this interpretation does not reflect the US Middle East strategy under the leadership of President Obama. His foreign policy has learned from the fiasco of US military intervention in Afghanistan, Iraq and Libya - with sharp criticism inside the country - the lesson is that the US Middle East policy needs to be reconsidered and that it should be focused on the most important national interests, that is, to ensure the security of the State of Israel before all to prevent Iran’s nuclear weapons, which was reached by the conclusion of a historic agreement last summer.

Unlike earlier times, Iraq, whose leadership listens more to Tehran than to Washington, and Saudi Arabia no longer play such an important role for the United States. Because thanks to the US shale oil and gas revolution, for the first time since the 70 oil crisis, it is fully able to provide itself with energy resources on its own. All of this is the basis for Obama’s restraint policy, and not his alleged indecision or weakness.

Therefore, you should not rely on the Russian-American alliance in Syria. Why does the United States do a favor to Russia? Rather, we can count on the fact that the US activity in Syria will continue to decline gradually.

More likely, the United States will gradually completely stop military operations in Syria in the future, while Russia is plunging into a Shiite and Sunni religious war with an open finale and should be on guard not to repeat the sad American experience in the region. And for Europe, this means that the migration crisis in the near future may be exacerbated by the escalation of the conflict in Syria, which is so feared.

Ctrl Enter
Noticed oshЫbku Highlight text and press. Ctrl + Enter
We are
Nikolay Silaev, Andrei Sushentsov: Georgia after the elections and prospects for Russian-Georgian relationsWho will be the next victim of destabilization in the Middle East?
Military Reviewin Yandex News
Military Reviewin Google News
28 comments
Information
Dear reader, to leave comments on the publication, you must to register.