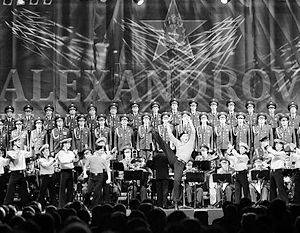 The authorities of the Baltic countries announced the Song and Dance Ensemble. Alexandrov "division of the Armed Forces of Russia", the appearance of which can result in a "provocation" and cause a "split of society." A completely peaceful group there has already been called the “ensemble of green men” - and despite the fact that the recent tour of artists in Europe by local authorities was not noticed at all.


The Foreign Minister of Latvia, Edgar Rinkevich, on Monday explained why he did not want to allow the Academic Song and Dance Ensemble of the Russian Army named after AV Aleksandrov, who is called in the local press "Green Men Ensemble", to tour.

“This ensemble is not just an ensemble. This is part of the Armed Forces of Russia. We officially informed the Embassy of the Russian Federation that the arrival of this part can take place only in accordance with the laws of the Republic of Latvia, - said Rinkevich to Latvian television (translation of the newspaper VIEW). - Before that, we had very contradictory information. Last week, my colleagues spoke with representatives of the Russian embassy, ​​informed about the procedure. We are waiting for a formal request in accordance with our laws, and then the competent authorities will decide whether to allow this part to arrive in Latvia or not. ”

The concert lacks an “official note”

According to Rinkevich, the negotiations began last week. “We have no official note. But I repeat, I do not think that the concert of this ensemble in the present circumstances would be correct. We informed the embassy that this ensemble cannot just arrive in Latvia. This does not mean blacklists. This is a different procedure. Here, the Ministry of Defense must have its say. We decide together about the arrival of a part of the armed forces of another country in Latvia, ”the Minister summed up.

In the Russian embassy in Riga, the VIEW newspaper has not yet been able to confirm the fact of negotiations on this issue. And the spokeswoman of the ensemble Alexandrova, Valentina Maximova, told the newspaper VIEW that “there was never such a thing” for the countries to require a special “official note” for the tour. Explaining that she herself was not authorized to resolve such issues, Maksimova nevertheless expressed the hope that the tour would not be disrupted.

The organizer of the movement in support of the Russian language in Latvia, human rights activist Vladimir Linderman, sees in the background of the actions of Riga politicians for two reasons. “First, it is psychosis and idiocy. They themselves screwed up to such an extent that they themselves believe in what they say to the public. This is the effect of propaganda. This is an irrational component, ”Linderman explained to the newspaper VIEW.

“And the rational reason is this: they are trying to force Russia into a situation in which it is not clear how to behave. The yard punks, when they try to provoke a person, send some sort of small shibzdik to him. Is it Hochma that the ensemble is a military unit? If Hochma, it is necessary to ignore. On the other hand, it is boorish hitting. The ensemble is state, it's not a private person, not a pop singer. “We need to respond,” said Linderman. - Everything goes to the fact that the concert will be banned. And Russia, in this case, I think, should give a tough, adequate response. ”
The oppositionist is sure that mostly Russian residents would like to come to the concert, but not only they. “Alexandrov's ensemble is quite interesting, not old-fashioned. Many would go. People of middle age, about forty years old, cannot vouch for young people. But still it will be necessary to take into account the price of the ticket, the level of organization of the concert, - explained Linderman. - In general, it is so accepted here: when artists come from Russia, people think that they should go. So that the youth, at least partially, would also come. ”

As for the ban on Soviet symbolism, which has been operating in Latvia for several years, it formally applies only to events of social and political significance, Linderman explained. “For example, this is a rally, a demonstration. A concert is a cultural event, so the ban is not valid. But if you wish, you can interpret differently and also “drive over” about this, ”the oppositionist warned.

In neighboring Lithuania, without any hesitation, the concert was canceled. True, this was not done by the government, but by the administration of the Visaginas Cultural Center. According to its director Danute Morkunene, at first she didn’t even know what kind of concert was planned in her building. “The event was classified. That is, one person bought one of the halls of the center, but did not say for what purposes, ”said Morkunene. But its main claim is the “ideological load” of the ensemble.

According to the newspaper VIEW, the head of the local art gallery “Aukštaitijskie Lakes”, an activist of the Lithuanian Republican Council of Russian Compatriots Galina Udovenko, became the “secret” customer. It actively cooperates not only with the Russian embassy, ​​but also with the Moscow “House of Compatriots”, Roszarubezhtsentr and other structures that Vilnius suspects of promoting the Kremlin’s “soft power”.

"I did not hide anything from anyone," Udovenko explained to the newspaper VIEW. - I got a call from the directorate of the ensemble, I also communicated with Sotikov. A closed event was planned, intended only for employees of a construction company - Russian compatriots who, having come together from all over the USSR, built the Ignalina nuclear power plant and the city of power engineers Snechkus (now Visaginas) here. ”

The decision of the director was greeted by the Minister of Culture, Sarunas Birutis. He stated that "there are clear signs that show that this concert would be one of the well-paid instruments of Moscow, the aim of which is to split the Lithuanian society."

According to the minister, “there is a desire to form a cultural and information background hostile to Lithuania with the involvement of Lithuanian regions, especially those with numerous diasporas of national minorities”. “Moscow is striving to take advantage of and is taking advantage of national minorities in order to widen the gap between the communities of the country,” says Birutis He called on all other Lithuanian officials in similar cases to follow the example of Morkunene. "I am pleased with the activity of the center and its public decision, this shows that we are a civil and unified society," he concluded.

The ensemble will tour the Baltic States through the Latvian company ART Music. Its head, Yevgeny Sotikov, explained to the VIEW newspaper that it was planned to hold closed concerts in Lithuania - exclusively for veterans of the Great Patriotic War. At first, the organizers hoped to organize a concert in the Lithuanian capital, but in vain. According to him, a number of concert venues in Vilnius, such as Pramogu bankas and Compensa, were refused, and then they had to stop at provincial Visaginas.

Even Makarevich recommended to send

The schedule of performances of the ensemble, approved by the Ministry of Defense in July, remains in force, according to Maximov. However, she confirmed that for two months the Estonian authorities have been pondering about whether to have an ensemble in the country. Back in early September, the Vice-Chancellor (Deputy Chief of Staff) of the Ministry of Internal Affairs of the Republic, Erkki Coort, noted that “Estonia is not a strong country to be intimidated with songs and dances,” but this is a special case. “The Estonian state will necessarily form its opinion on this issue,” Rossiyskaya Gazeta quoted him.

“Tallinn was the very first to start historyit was there that “questions arose”. There was a man who appealed to the Ministry of Internal Affairs with a call to conduct an investigation. And the Estonian Ministry of the Interior was the first to admit that the impact of the ensemble's creativity is great and can excite minds, ”noted Maksimova.

“We have fewer 10% of military personnel among the ensemble members. The rest are civilians, she told the RSN earlier. “Musicians, dancers who have received professional education, necessarily higher, in conservatories, academies.” A spokeswoman recalled that the ensemble has been performing a peaceful mission for 87 for years - the repertoire does contain songs from the war years, but for the most part it consists of Russian folk songs, dances, old romances.

It is noteworthy that in other countries - “young people” - the tour did not cause any reaction of the authorities at all. So, according to Maximova, the tours that took place in October in the Czech Republic, on the contrary, gathered full houses. They could not spoil and several Ukrainian activists who tried to arrange a provocation.

True, in Poland, the nationalists, through social networks, threatened to disrupt the ensemble's upcoming performances this month, drowning them out with “the roar of pans and whistles”. But the organizers replied that the tour will take place anyway. Even opposition-minded Russian musicians surveyed by NSN advised colleagues not to pay attention to threats from social networks. “Well, who opposed the concerts of the band? Polish President? Not. Some kind of incomprehensible people. Yes, they went to f * ny! ”- Andrei Makarevich, the leader of“ The Time Machine ”suggested laconically.

Ctrl Enter
Noticed oshЫbku Highlight text and press. Ctrl + Enter
We are
What you didn't want to know about EnglandHow Latvia pragmatically and constructively cooperates with Russia
Military Reviewin Yandex News
Military Reviewin Google News
86 comments
Information
Dear reader, to leave comments on the publication, you must to register.