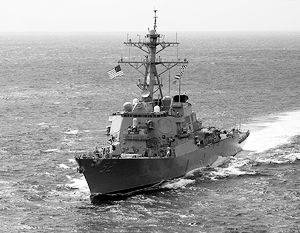 Chief of Staff of the US Navy, complaining of the high activity of Russian warships, explained that the possibility of sending more US warships closer to Russia - in Europe. Do Americans have the opportunity to return to a degree of presence in the Mediterranean, comparable to the Cold War?


The US, against the background of high activity of Russian warships and submarines in the Black and Mediterranean seas, as well as in the Pacific Ocean, was thinking about sending more ships to Europe and increasing the potential of the navy in Europe, said the head of the US Navy headquarters, John Richardson. He noted that "similar activity of ships and submarines (Russia - approx. LOOK) was not observed for at least 20 years", in connection with which the United States is forced to reconsider its position of global leadership in the world, quoted the Financial Times head of the US Navy.

Richardson stressed that “right now we are discussing the question”: should we increase our presence in Europe and the Pacific to “maintain the necessary balance of power and how to distribute our forces so that we can firmly be sure that we maintain this balance” .
According to the head of the US Navy headquarters, US officials, in particular, find the monitoring of the most important telecommunications cables on the seabed by Russian submarines "extremely alarming": "This could be a threat to any other global system, the information system associated with prosperity, associated with security, ”said Richardson.

Russia's activity in the Pacific really grew, in particular the head of the naval fleet Russia's Viktor Chirkov recently said that since 2013, the intensity of Russian underwater patrols has increased by 50%, FT recalled.

Russia, Richardson believes, is trying to increase the presence of its navy in the oceans in order to establish itself as a “serious player” on the world stage, and for a long-term perspective. For example, she recently demonstrated the quality of her Navy by launching cruise missiles from the ships of the Caspian flotilla against the targets of the Islamic State terrorist group in Syria, banned in Russia, the US Navy head said: “These are significant opportunities, a serious demonstration comment LOOK) ", - he said.

“The controversial motives of Russia and China are disturbing”

Richardson also added that the increased Russian activity falls on the period “when the US conducts an operation in the South China Sea to counter the assertive actions of China, which also expands its navy and builds five artificial islands. China threatens freedom of navigation in waters where one of the main trade routes runs - it accounts for 30% of world trade, ”the head of the US Navy said.

Thus, “Russian and Chinese activity, ambiguous motives of these two countries raise concerns for the state of the global system, which ensures equal access for all, free shipping and trade”. “It is particularly disturbing if this model is now under threat?” Richardson wondered.

However, he pointed out that there are also positive examples of naval cooperation with Russia and China, through which, in particular, none of the commercial vessel has been hijacked by pirates in the Gulf of Aden. China has played an important role in patrolling these waters off the east coast of Africa. However, according to the South China Sea between the two countries with the position of the United States is clearly diverge sure Richardson. He recalled that the United States hold the key and the Senkaku Islands (which China also contests, but Japan).

However, on October 19, the New York Times reported that the command of the US Army does not have enough equipment and financial means for the prompt delivery of heavy military equipment to Europe. Although earlier, in June, the same newspaper, citing American officials, noted that the Pentagon is considering deploying heavy weapons in Eastern Europe as an alleged response to "possible Russian aggression" in the region. It was reported that the United States could place at the bases of its European NATO allies Tanks, infantry fighting vehicles and other types of heavy weapons.

“Trying to show that they are still strong”

Chairman of the All-Russian Fleet Support Movement Mikhail Nenashev, in an interview with the newspaper LOOK noted that the intention of the US to increase its presence in the Black Sea and the Mediterranean linked to the global geopolitical processes.

“The United States feels that they are falling out of the global agenda. As before, everything that is being done in the world, mainly negative and destructive processes, is being done according to the US scenario. But the key word here is for now. They create different arc of tension and geopolitical conflicts. It seems to them that in this way they successfully manage the international “hassle”, said Nenashev.
The interviewee is confident that the US plans to strengthen its position in the European seas are associated with a set of geopolitical events. The intention to strengthen in the European seas is associated with an attempt to show that the US can still do something, nothing more. “We are resolutely repulsing the international terrorist international, we are strengthening our strategic relations with India and China. Naturally, the United States feels uncomfortable in such conditions. They drop out of the global agenda, and India, China and Russia intercept the leadership, ”noted Mikhail Nenashev.

In all likelihood, the source said, the United States will soon act more aggressively. “Many of Washington’s actions look, frankly, funny. Then they will deploy a company in Poland, then a platoon in Estonia. The US Navy is undoubtedly the basis of their “long hands,” but the 21st century is the age of the decline of US influence in the world, ”the expert concluded.

“It is possible to increase the number of permanent operational connections in these regions,” said Vladimir Murakhovsky, a military expert, chief editor of the Arsenal of the Fatherland magazine, in his commentary on the VIEW of the View.

“It is now known that four destroyers with the AEGIS antimissile system are on a permanent basis in Spain. There is also an almost permanent union of European NATO countries in the Mediterranean. True, they say that it is intended to regulate the flow of refugees across the sea to Italy. Nevertheless, this is a combat operational connection, ”the expert noted.
Compared with the period of the Cold War, the US military presence in the Mediterranean Sea has decreased significantly, explains Murakhovsky. “Let me remind you that in those years there was an 6 fleet deployed on a permanent basis, which included at least one aircraft carrier strike group. Then the strategy, including naval, in the United States has changed. They in their national military doctrine, which was adopted last year, say that the main efforts are shifted to the Asia-Pacific region. And it can be seen in the composition of the American grouping there - the 7 of the American fleet, including aircraft carriers, is constantly present there, ”the source notes.

Return to the former scale of their forces in the Mediterranean, Americans will not be able to purely for financial reasons. “Considering that the US military budget in real terms is shrinking for the next year, I do not think that they will go to such large additional expenses. If additional ships are deployed in the Mediterranean, this is of no strategic importance. Rather, the operational and tactical value ", - said Murakhovsky.