Who will be appointed guilty of the Egyptian tragedy and who will benefit from it? 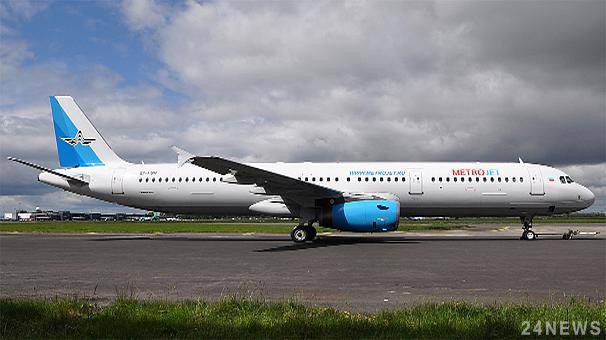 In fact, they don't wave their fists after the fight. This is folk wisdom in the rank of axioms. However, all such events have consequences that even we are not able to assess today.

Of course, the investigation will be, and there will be the perpetrators. The whole question is who. And what to do next.

At the moment, there are three main versions:

After talking with people who are much better than me who understand everything that flies, we came to such conclusions.

1. External influence. This item is quite satisfied with the company "Kogalymavia", but the Egyptian authorities are absolutely not satisfied. We have removed this item from the agenda. The launch of a rocket capable of “getting” an aircraft from 10 thousands of meters overlooking is difficult. Yes, and the initial inspection of the wreckage did not show the presence of any traces of external exposure or fire.

2. Internal impact. That is, a terrorist attack. On the one hand, it is difficult to dismiss such a probability, on the other hand, even when the plane is undergoing preflight training, refueling, etc., these actions are under the control of the crew. Must be at least. And again, the survey of debris showed no signs of a fire in the cabin. And you will agree (I agreed with such arguments) that an explosion without a fire is a very rare matter. And an explosion with no trace of an explosion is even more so.

This version, we are also postponed. The bomb in the baggage also has a certain probability, but this could happen where control of the flight is so-so. But not at the international airport of the country, which is not enough, depends heavily on the tourist business, and even is in such a company around him, where only the lazy do not fight. It’s generally easier to find a place where it’s quiet. And fingers on one hand are enough to count.

3. Technical failure. Here is a wider choice of versions. Yes, this item does not suit first of all the management of Kogalymavia airline. Because according to our legislation, at least a criminal case is coming under the relevant article. For guidance. And this manual will go to great lengths to prove that the plane was all good. But...

However, there are many nuances. And in order to properly assess the likelihood of something, we will come from afar. That is, from the creation. Not the world, of course, but the plane. Because it was the plane that caused the tragedy in the first place.

For a start, I asked myself a question, but whose is this “Airbus”? It turned out that the American. The owner is International Lease Finance Corporation (ILFC), an American leasing company specializing in leasing, leasing and selling aircraft. Headquartered in Los Angeles.

Some sources say that this is an American-Irish company, but from Ireland there is only a semi-offshore registration. And the rest is in the USA.

This is a very large company. The first in terms of assets in the United States and the second in terms of the number of aircraft offered in the States. The company, like its like, works according to the following scheme: the plane is bought, and then rented to various airlines. During the life of one aircraft it has time to pass 5-6 companies. What happened to the person involved in our case. The plane managed to visit Lebanon, the Saudis, and Malaysia. And in 2012, I got into Kogalymavia.

Usually, when renting complex mechanisms, the owner guarantees his initial good condition. Unfortunately, the practice and rules of aviation international leasing were written by transnational banks and financial companies in their own interests.

According to the recommendations of IATA (International Air Transport Association), the majority of contracts for operational leasing (i.e. lease) of aircraft are concluded in such a way that the leasing company has no obligations at all in terms of the condition of the aircraft and its hidden defects.

"This implies that the lessee is obliged to accept the aircraft in the condition in which it is located during the inspection before buying or leasing, even if the aircraft is damaged or defective, without modification and without any explicit or implied warranty." Quote from the documents of this association.

In general, it turns out that you rent a plane and must pay for this rent. And the rest is your problem. In principle, what else can you expect from American companies that play by their own rules?

Today the situation is such that if the lessors succeed in “pushing” a defective aircraft to someone, then they will not bear any responsibility for the consequences. Moreover, provide the lessee with accurate information about stories aircraft, in general, is also not required.

This does not remove the responsibility of operating the aircraft, but still the scheme itself is frankly mean to the passengers.

By the way, the company ILFC itself does not have a very clear reputation. Relatives of the victims of plane crashes, which she leased, tried to sue her repeatedly, but without success. One such lawsuit is that the ILFC already had one major disaster in Sharm el-Sheikh: On January 3, Flash Airlines airliner Boeing 2004-737Q3 from the Red Sea, which leased a plane from the ILFC, crashed into the Red Sea near the coast. Killed all 8 passengers. Investigators from different countries could not reach a joint conclusion about the causes of the disaster. Opinions were divided between pilot error and technical malfunction of the aircraft. A California state court refused to consider the claims of the relatives of the victims to the ILFC.

"We don’t give up ours?" Obviously, do not pass.

So, whatever the results of the examination, the air traders from Los Angeles will not be punished. And it saddens no less than the fact that such aircraft, "competitive" and "modern and economical" in our airlines, are more than enough.

Let's go back to the Airbus. The plane is not old. But pretty "well-worn." And had already noted in the state of emergency. The aircraft was built in the 1997 year, and he received a “tail kick” in the 4 year of operation by the Lebanese airline MEA. It is logical that no one will be able to write off a broken aircraft after all 4 years of operation, but then the question arises whether it was repaired well, and whether subsequent operators knew that they were flying on an aircraft that has the risk of simply falling apart. the air.

Maybe they knew. That's why they tried to quickly get rid of him. Finally, he got to ours. And now, we have what we have. 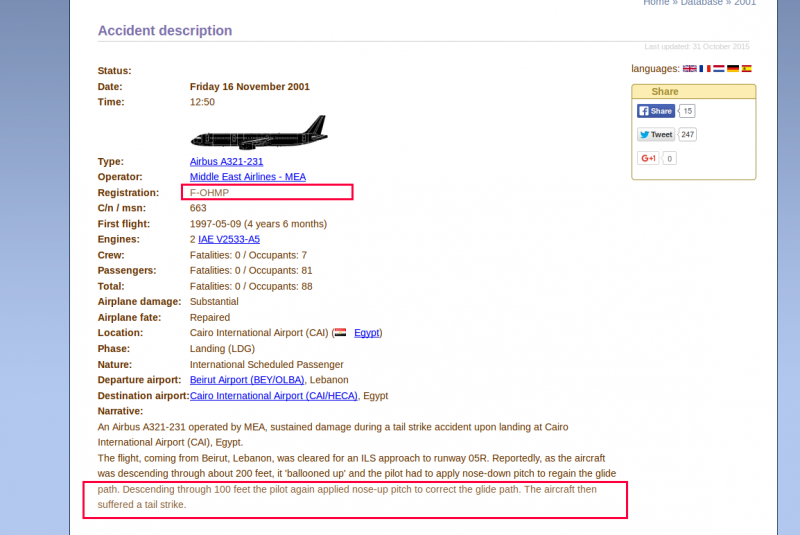 The plane received a "tailstrake" - this is a blow from the tail section of the aircraft to the runway. Apparently, the aircraft underwent repairs after this incident. Repair in such cases is considered a difficult and expensive operation.

There are at least two confirmed cases in which improper repair of such damage led to the subsequent destruction of the aircraft in the air:

In the aforementioned catastrophes, the investigators came to a definitive conclusion that the incorrectly repaired “tail-strip” was the cause of the disaster.

It can be considered proven that aircraft that survived a tail strike and did not receive adequate maintenance, can be destroyed in the air, which, in turn, can lead to accidents with human victims. Could Kogalymavia's plane suffer the same fate? Tailstrike in 2001, plus possible inadequate repairs and / or maintenance could have caused the plane to fall apart in the air.

Everything stated is quite vital.

Moreover, the experience of already occurring catastrophes shows that years may pass from the moment of improper repair of the aircraft to the subsequent accident, and the problem may go unnoticed with numerous routine checks that simply do not involve the search for such structural problems. And to say that it could well be in the United States, and we, somehow, the language does not turn.

The photographs of the wreckage of the "Airbus A321" show a more or less intact "tail", which seems to be separated from the aircraft. How this is vital and fair, of course, will show a consequence. 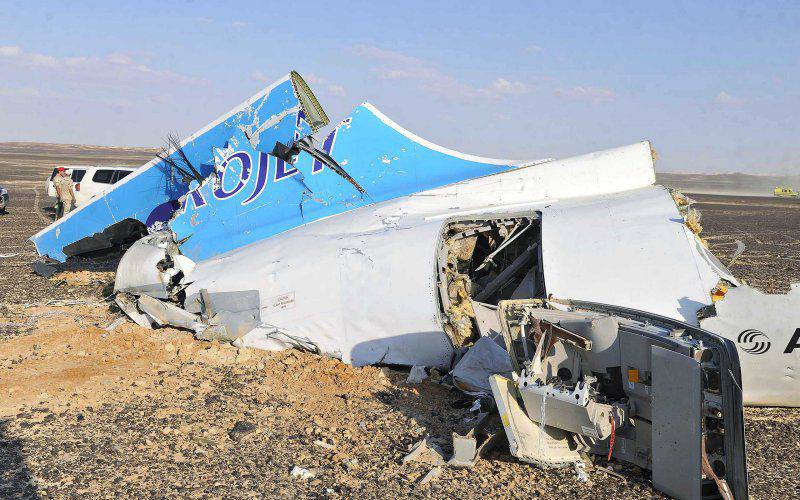 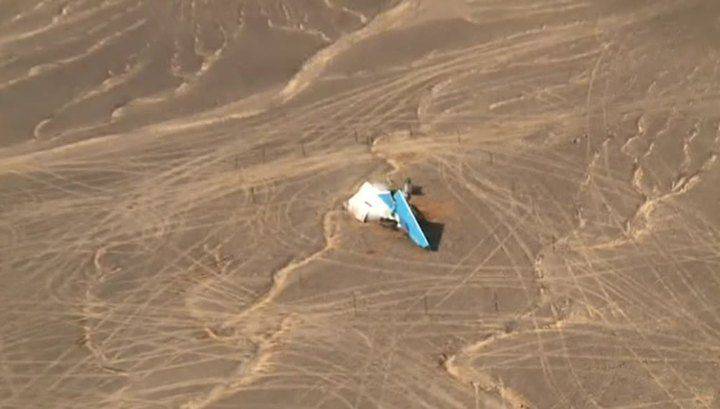 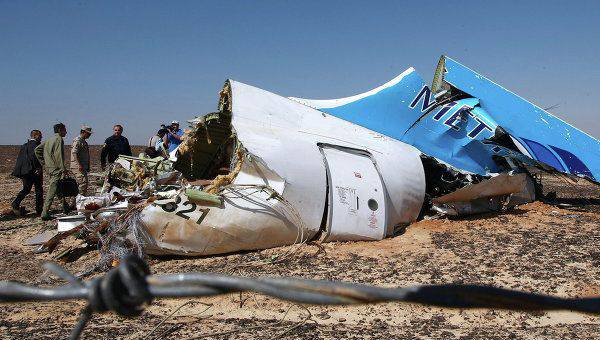 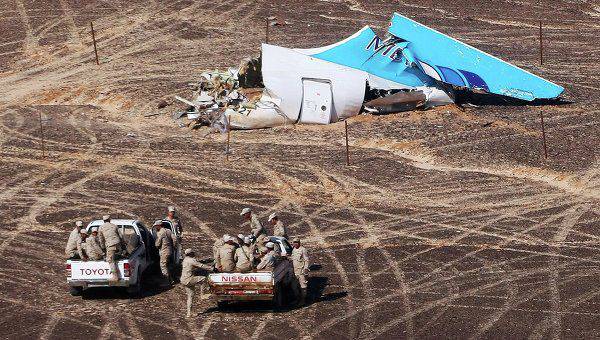 And one more thing that attracted the attention of the flight crew. Lack of stabilizer and rudders on the separated tail section. There is such a term for pilots, called "stabilizer shears". This is when the stabilizer fulfills the off-design mode. And then it is quite possible such an evolution of the aircraft, which may well lead to its destruction.

Plus joystick control system. The joystick is not a steering wheel, which you can at least try to hold. In a situation of emergency, the joystick has to be grabbed. In any case, the pilots had something to do in the last minutes of life. The evolution of the aircraft confirms this.

1. It is necessary to urgently consider and legally adopt a ban on the purchase and rental of "broken" aircraft by Russian companies. The risk to the lives of passengers is not worth the discount with which such aircraft are offered on the market.

2. The most active way to do the real import substitution in the aviation sector. And not on paper, but in practice. Without buying new or "slightly used" Boeings and Airbuses, and Tu, Su, Elah.

Buying new Russian aircraft, not arguing about the imaginary inability to compete and economy. "Efficiency", rolled back into the pockets of procurement officials, is a tragedy. And the lives of Russians.

We, Russians, are worthy of flying aviahlam gone into oblivion. And left forever.

Ctrl Enter
Noticed oshЫbku Highlight text and press. Ctrl + Enter
We are
Armored vehicles of Yugoslavia. Part of 3. Yugoslav People's Army (1945-1980's)Situational analysis of the death of the MH17 flight (Malaysian Boeing 777), made on the basis of engineering analysis from 15.08.2014
Military Reviewin Yandex News
Military Reviewin Google News
174 comments
Information
Dear reader, to leave comments on the publication, you must to register.