The project of the automatic anti-tank gun Škoda SV4

November 12 2015
14
The most obvious way to increase firepower weapons - provision of automatic fire. This technology has received the widest distribution in small arms, and is also used in some classes of artillery. However, automatic guns did not find use in field anti-tank artillery. Despite all the efforts of the gunsmith designers, such weapons either did not possess sufficient characteristics or did not have acceptable prospects. An example of the latter can be considered a tool Škoda SV4, created in the early forties.


By the time work began on the SV4 project, Czechoslovakia was occupied by Nazi Germany, and its enterprises were working for the Germans. The SV4 project, like many others, was developed in the interests of the Wehrmacht, with the aim of increasing the potential of its anti-tank artillery. It was planned to increase the firepower of the units through the use of special automation. Due to the possibility of firing bursts it was supposed to significantly improve the fighting qualities of a promising weapon. However, to solve this problem, it was necessary to develop a special system for the automatic supply of ammunition.

The Škoda SV4 automatic anti-tank gun project is known by two names. The authors of the project used the factory designation "SV4". At the same time, the German armed forces gave the project a new name that corresponded to their nomenclature of weapons and equipment - 5 cm RAC 2.06 / 835. The army name reflects the main parameters of the used ammunition: caliber, as well as the weight and initial velocity of the projectile. Also, in some sources, the factory designation A13 is mentioned, but in this case, apparently, there is some confusion, since this name was carried by another 50-mm cannon from the Skoda company. 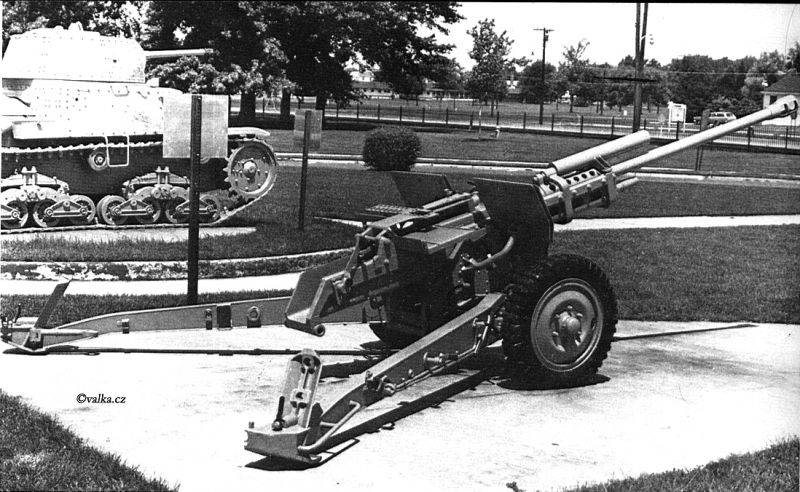 The SV4 cannon at the Aberdeen Proving Ground

It was planned to build a promising tool according to a proven classical scheme, which affected its appearance. The gun should be installed on a carriage with a wheel drive and sliding bed. Arriving at the firing position, the calculation of the gun had to breed the bed and fix them with openers. For the safety of the calculation during the battle, the gun had to be completed with an armored strap 4,5 mm thick. In terms of the main points of operation, the SV4 cannon should not be different from other guns of that time.

The artillery part of the RaK 2.06 / 835 cannon was also developed using existing developments, however, its design should have provided for automatic warfare systems designed to solve the main task of the project. The gun with recoil devices located above and below the barrel was mounted on a cradle connected to guidance mechanisms. The latter provided horizontal guidance within the sector with a width of 65 ° and vertical from -12 ° to + 20 °. These features of the gun carriage made it possible to effectively use the gun against all that existed at that time. tanks.

The SV4 cannon received a barrel of 50 caliber mm long 60 caliber (3010 mm). To reduce recoil, it was equipped with a muzzle brake, in addition, the gun received recoil devices. Due to all these measures, the length of the recoil when fired does not exceed 550 mm. The cradle of the gun had a characteristic shape, close to rectangular. Due to this, the breech of the gun was located in a kind of tray formed by the bottom and sides of the cradle. Among other things, this "tray" was used to reset the spent cartridges. The used cartridges had to fall out of the chamber and roll down the tray to the ground.

For firing bursts of gun received the original ammunition supply system. On the upper part of the sides of the cradle, above the breech of the cannon, a horizontal tray was fixed, perpendicular to the axis of the barrel. The breech of the gun, the cradle and the tray were connected by several mechanisms designed to transfer recoil energy when fired on an automatic recharge device. 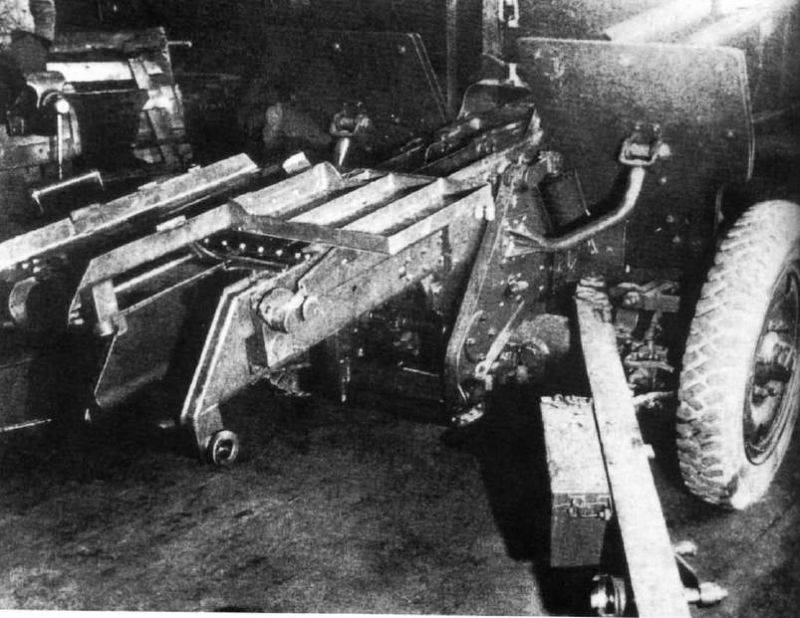 The breech of the gun. Top visible tray for cassette shells.

In the horizontal tray, mounted above the breech of the gun, a special cassette should be placed on 5 (according to other data, on 8) unitary shells of caliber 50 mm. During the shooting, the mechanisms of the gun were to independently move the tray from right to left, after each shot leading the next section of the projectile to the breech of the gun.

According to reports, the automatic cancer cannon 2.06 / 835 was supposed to work at the expense of the recoil energy of the barrel. When moving backward, the automatic opened the bolt and threw out the sleeve. Under the action of the nakatnik, the gun returned to its extreme forward position. In this case, the next projectile was supposed to fall on the line of dropping and go to the chamber. This was followed by a bolt lock and the next shot.

The Škoda SV4 anti-tank gun was supposed to weigh 1300 kg. In the stowed position, the weight increased slightly and was 1350 kg. The gun could be towed using existing equipment or horses. Due to the tire size 6.50-20 with a gauge 1520 mm it was planned to provide an acceptable throughput.

Despite the existence of other 50-mm cannons, the Skoda designers decided to use a new type of proprietary ammunition. For a promising weapon, a unitary shot was offered with a 50 caliber mm projectile weighing 2,06 kg. The propellant charge provided the muzzle energy at the level of 7355 J and the initial velocity of the projectile of the order of 835 m / s. There is information that the PaK 1 / 2.06 cannon could penetrate an armor plate 835 mm thick from a distance of 50 km. For comparison, the serial PaK 38 in the same conditions punched 48 mm armor. 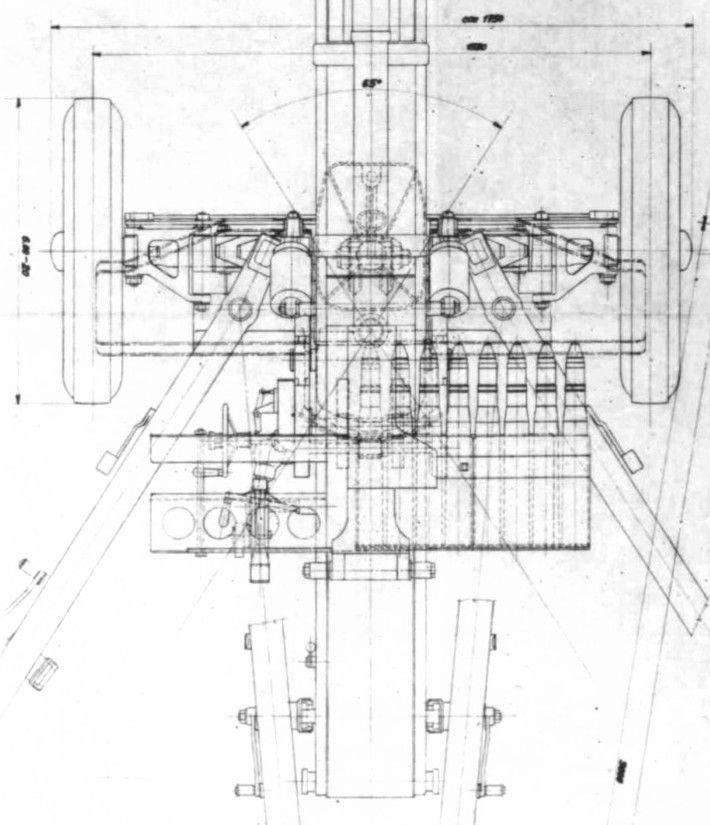 Used automation, working on the energy of impact, could provide the highest rate of fire. The SV4 technical rate of fire reached 80-100 rounds per minute. Thus, using the capabilities of a cannon, a trained crew could shoot several stores per minute, conducting quite effective attacks from the enemy’s technology. However, in case of intensive shooting with frequent replacement of cassettes, the calculation of the gun should have taken into account possible overheating of the barrel.

It is not difficult to guess that, due to the high power of the propellant charge, it was not necessary to count on the retention of pickups during firing by the queue. Nevertheless, even the existing variation in firing made it possible to count on obtaining sufficiently high combat qualities. So, despite the scatter, at least one could hit the target from one store with the capacity of 5 shells. As a result, it turned out that shooting single shots and a queue (with the same performance) had almost no differences in terms of ammunition consumption.

The automatic anti-tank gun SV4 or PaK 2.06 / 835 offered by Škoda had notable advantages over the existing PaK 38. With comparable armor penetration, she could fire in bursts, which should have had an impact on her fighting qualities. Nevertheless, the industry of occupied Czechoslovakia did not receive an order for the production of promising guns. The SV4 project appeared in 1941, and its real prospects were soon identified.

At the time of the German attack on the Soviet Union, the armored units of the Red Army had several types of tanks with different characteristics, including some new models. 50-mm German anti-tank guns could confidently fight only with outdated armored vehicles, while the defeat of T-34 tanks, not to mention heavy vehicles, was guaranteed only from a distance of no more than a few hundred meters. 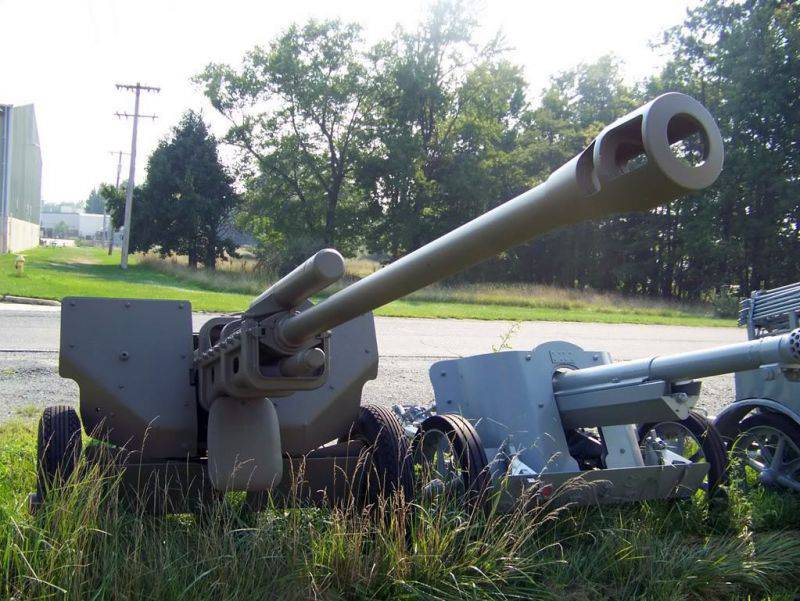 The SV4 cannon in the museum. Presumably the company Skoda Museum

Such a ratio of the characteristics of armor and guns clearly indicated that anti-tank guns of the 50 mm caliber were surviving their age and would become useless in the foreseeable future. Prospective Soviet tanks, according to German specialists, should have even more powerful armor, which could make useless both the existing PaK 38 and the promising PaK 2.06 / 835 over the next few years.

The PaK 38 anti-tank gun was discontinued in the 1943 year, due to its inadequate performance. The SV4 gun or PaK 2.06 / 835, in turn, did not reach mass production. The command of the Wehrmacht did not order a weapon with interesting characteristics, but ambiguous prospects. The exact number of guns of this type fired remains unknown, but it can be assumed that only a few prototypes used in the preliminary tests were made.

It is known that after the war, at least one copy of the Škoda SV4 cannon went to American specialists. The gun was checked at the Aberdeen Proving Ground, and then sent to the local museum. At the exhibition site, the gun was at least until the mid-seventies. The further fate of the gun is not known. According to some information, in the future it (or another sample) was given to the developer, after which it again became a museum exhibit.

Skoda specialists, who worked on the SV4 project, managed to solve the task and develop an anti-tank weapon with an automatic supply of ammunition. Nevertheless, the authors of the project made a mistake with the choice of the caliber, because of which, by the time of its appearance, the weapon had lost any clear perspectives. As a result, Nazi Germany was left without a new weapon with sufficiently high characteristics, which, probably, to some extent brought its defeat closer.