November 4 2015
41
The recent intensification of hostilities in the Donbass can surprise only those who do not fully understand the logic of what is happening or have not particularly followed the events for some reason. Those who at least know about the evolution of regimes similar to modern Kiev, just nod - they have long known everything. The science история unequivocally tells us about dozens of similar dictatorships: they all had an extremely limited shelf life and about the same final. And they always resorted to means of delaying the final similar. The Ukrainian regime in this regard remains almost a textbook specimen, recognizable and predictable to the indecency. 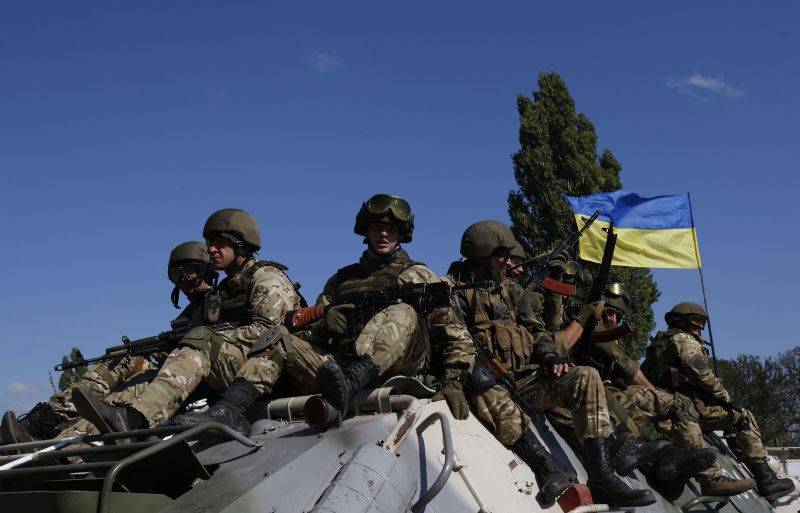 Some time ago, with the onset of a relative lull in the Donbass, in the rest of Ukraine, a political bounty hunting season opened. Opposition of all stripes massively attacked the incumbent president, and Poroshenko, in turn, clumsily tried to clear the clearing around himself. Stories with Korban, UKROP, and other disloyal subjects are just the tip of the great fight that has unfolded in the vast Square. And if we add to this the chaos in Odessa, where the redistribution of the most profitable property is taking place, and the Kolomoisky group of ashes, the situation looks quite depressing. No, we are not talking about losing the control of the country, but this happy moment is just around the corner. If the war with Donbass still somehow supported the fragile unity of the elites, then the “truce” threatens to finish it off completely, because without reports from the fronts the deplorable state of the country is increasingly striking. For example, as predicted earlier, Ukrainian oligarchs exported far more grain abroad than even the most incorrigible pessimists could have imagined. This means that soon the country is waiting, no - not hunger, but a tangible rise in price of food in addition to the increased utility bills.

With military victories also wondered. Although Minsk-2 as a result must transfer the Donbass into the hands of Kiev, the dates are all shifted and shifted, and now the commander of the Azov Biletsky blames Poroshenko for the surrender of Donbass to Putin.

Generally, Peter Alekseevich not envy. He can not fully fight. On the one hand, Europeans are twisting his hands, who are vitally interested in the resumption of normal trade relations with the Russian Federation after the lifting of sanctions. On the other hand, the industry pumped up, which was unable to provide the release of new military equipment in the required quantities. The army, which has been sitting idle in trenches for months, gradually loses its offensive outburst and decomposes. The punitive battalions, which were supposed to prop up the military in the form of detachments, themselves became the source of endless problems.

But it is impossible not to fight, because as a peacetime leader, the incumbent president was completely incapacitated. If the “world” lasts long enough, then this fact will become obvious to everyone and Poroshenko will face an extremely unenviable fate.

The real way out for the Ukrainian leader is the resumption of low-intensity hostilities in the Donbas, which we are seeing these days. And this will continue until Moscow realizes simple truth - the Ukrainian regime is a constant threat, as long as it exists at all.

If we talk about Americans, then Poroshenko is needed as a stabilizing element of all this explosive mass, which gives it a kind of controllability. As soon as he cannot serve as such an element, he will be immediately written off. Washington does not care who will lead Ukraine — oligarchs, Nazis, or field commanders following the example of African Somalia. The main thing is that it creates problems for Russia. In this sense, "casino is always a winner."

In a sense, the military aggravation in the Donbass that began these days is also the reaction of the Americans to Putin’s actions in Syria, so here Poroshenko and his curators from across the ocean have a complete coincidence of interests. The discrepancy may be different - the United States may not organize a sluggish campaign, and then the president will be required to launch a large-scale offensive of July 2014 or higher. The reasoning of some observers and bloggers that after the demobilization of forces for the offensive Nezalezhnaya no longer looks strange. Even if we take it as an axiom that Kiev will not be able to capture the remnants of Novorossia at once (which, by the way, is not at all obvious), then it has everything necessary for victory in a limited but critical area. Military experts have long been calling the most likely direction a blow from Volnovakha towards the Russian border, upon reaching which Ukraine will immediately announce a ceasefire and next peace initiatives, and the DPR and LPR will be cut off from the sea with the prospect of a complete defeat of the coastal group. Let us pay attention to the fact that the APU and the National Guard are now more than equipped for such an adventure. Moreover, judging by recent exercises, the land part of the invasion will be propped up aviation, which almost fell out of the war from the spring-summer of last year. It is also important how Moscow will respond to the treachery of its neighbors - a decisive and merciless blow to the advancing columns or the next Minsk agreement.

Well, in the end a few words about the Crimea, to which Kiev’s attention will inevitably switch after a hypothetical victory in the Donbas. The gloomy genius of Ukrainian nationalism continues to generate the most wondrous plans for the peninsula. They could be ignored if excerpts from the meetings of such parties were not later found in the state programs of Ukraine. One of the fresh incarnations of the thought is that the Russian-speaking citizens themselves should return the Crimea to Ukraine through an uprising. Say, dissatisfied with rising prices and bureaucracy, the inhabitants of the peninsula themselves will revolt, hoping to return everything, as was the case in Ukraine with the restoration of Kiev power. Note that the authors' hope is for the very citizens who are later planned to be assimilated / evicted / exterminated according to other “cunning plans”.

This perverted logic has a rather weak rationale - the inhabitants of the peninsula compare the current realities with Ukraine under Yanukovych. But Ukraine today is a little like Ukraine Yanukovych, who will never return. I want to believe that Crimeans understand this.

Ctrl Enter
Noticed oshЫbku Highlight text and press. Ctrl + Enter
We are
Iran Air Show 2016 air show opened in IranMemory is immortal. Memorial to the fallen soldiers of the Red Army opened in Amvrosiyivka and the remains of soldiers reburied
Military Reviewin Yandex News
Military Reviewin Google News
41 comment
Information
Dear reader, to leave comments on the publication, you must to register.