He does not need permission

November 4 2015
39
The other day, Turkish President Recep Tayyip Erdogan announced the readiness of the authorities to do everything to prevent the creation of autonomy by Syrian Kurds near the state border. To begin Turkey’s actions, “no one needs permission, we will do what is necessary,” Erdogan said. The head of Turkey did not rule out a military operation. 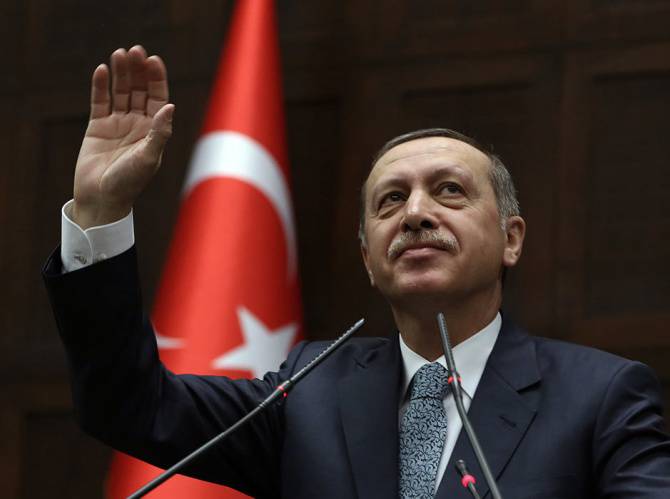 29 October Interfaxreferring to Reuters, he conveyed the statement of Turkish President Recep Tayyip Erdogan. He reported on the readiness of the authorities of the country to do everything necessary to prevent the creation of autonomy by Syrian Kurds, supported by the US, near the state border.

“Turkey does not need anyone’s permission, we will do what is necessary,” the agency quotes Erdogan.

According to the head of Turkey, he does not exclude the possibility of a military operation.

The agency recalls that Erdogan’s statement was made after the announcement of autonomy by the Kurds in the city of Tell-Abyarde near the Turkish border. Ankara believes that the intentions of the Kurds threaten the national security of Turkey.

The “aggravation” of the Kurdish issue in Turkey is caused by the events that followed the parliamentary elections of 1 in November. In the Kurdish areas of the country, protests began immediately to manifest preliminary results in the media.

“Erdogan wants to establish a presidential republic in Turkey. From the last election, his intentions have not changed. Now we have the last opportunity to do something until the dictatorship is established in Turkey, ”the channel quotes. "RT" Oppositionist, journalist for the newspaper Cumhuriyet, Jade Karan.

The pro-Kurdish Democratic Party of Nations, founded in 2012 and opposed to nationalism, can initiate change. Recently, notes "RT", she enjoys more and more support, and not only from the Kurds.

The leader of the "Democratic Party of Nations" is a young and charismatic Selahattin Demirtas. After the elections, tensions related to the Kurdish issue moved to the active phase, and Erdogan notes BFM.ru, began to accuse Demirtaş of links with the banned "Kurdistan Workers Party" (the latter, after the air strikes of Turkey on the positions of the Kurds in Iraq, announced the break of the truce).

Channel site "RT" November 3 reported an explosion in a supermarket in a city in southeastern Turkey, which is mostly inhabited by Kurds. Two dozen people were reportedly hospitalized.

The “Democratic Party of Nations” still passes to parliament, and therefore will be able to resist Erdogan, who is seeking to expand presidential powers.

On election day, reminds of "RT", there were reports of violations: some volunteers who followed the elections could not get access to many polling stations. Over a thousand people were arrested for trying to vote several times. As a rule, they tried to “cast votes” for the “Justice and Development Party”, that is, the Erdogan party.

What could mean Erdogan's statement on preventing autonomy by Syrian Kurds near the state border? And will the president who pretends to be the “sultan” decide to go far?

Director of the Center for the Study of the Middle East and Central Asia, Semen Bagdasarov believes that Erdogan’s threats can be implemented.

“PKK” can not only start direct clashes with the Turkish army, but also act more subtly, said the expert "Free Press". - In the cities of Turkey, inhabited mainly by Kurds - in Diyarbakir, etc. - mass unrest can begin, which in the end will lead to the paralysis of Ankara’s power. And this is a civil war. ”

But what about the USA? “The United States supports the Syrian Kurds, so to speak, from hopelessness,” the expert noted. - Washington needs to demonstrate success in Syria and, first of all, take Er-Raqqa - I’ve spoken about this more than once. Americans need power on earth to work closely with their aviation. By the way, the United States considers the “Kurdistan Workers Party” a terrorist organization, but it’s still dropping the Kurdish militia in Syria weapon in tons: the Syrian and Turkish Kurds for all the years have adapted so much to all the intricacies that they already know how to get weapons. ”

The expert recalled that the military wing of the "PKK" are armed formations, which until recently were called the "Army for the Liberation of the Peoples of Kurdistan". The total number of people - up to 10 thousand people. The number of people's self-defense units (YPG), until recently, reached approximately 50 thousand people. After the Syrian Kurds have announced mobilization, we can most likely talk about the number of thousands of fighters in 70. Plus Sinjar Yezidi formations - even before 5 thousands. The potential is “more than sufficient,” the analyst notes. In addition, the Kurds are good warriors, and therefore the United States put on them.

But what about the Turkish army?

Before the coming to power of Mr. Erdogan, this army was powerful. Its number was almost a million people. However, today it is halved. “But the most terrible act of Erdogan in relation to his armed forces is the initiation of a number of criminal cases (frankly contrived) over officers and generals, both active and in reserve,” the expert says. “That is, a significant part of the army was repressed.” In the military, Erdogan is treated badly.

So, the Kurdish issue has become acute in Turkey. Erdogan, who wants to reshape the country's constitution under the “super-presidential” and become a “sultan”, is not only pro-Kurdish political forces standing in the way, but also the Kurds in the person of the PKK, who have canceled the previous truce. The Syrian crisis year after year unites the Kurds into a united front, the Kurds grow stronger in battles and gain military experience. An “optimized” Turkish army, cool to Erdogan, will not be easy to resist such fighters.

Will the “Sultan” decide on large-scale military actions? And what will the Kurds in Turkey do in this case? It is impossible to predict. Other analysts already foreshadow a civil war ...

Observed and commented on Oleg Chuvakin
- especially for topwar.ru
Ctrl Enter
Noticed oshЫbku Highlight text and press. Ctrl + Enter
We are
Results of the week "I do not need a Turkish coast"Turkey against the Kurds. Is there a new phase of conflict ahead?
Military Reviewin Yandex News
Military Reviewin Google News
39 comments
Information
Dear reader, to leave comments on the publication, you must to register.