Do not remove them from sanctions?

November 5 2015
27
The recent visit of Vice Chancellor and Minister of Economy of Germany Sigmar Gabriel to Moscow for the European and American press was a complete surprise. Even the German editions found out about Gabriel’s plans only on the day of departure. The American brain trust Stratfor has speculated that Berlin is rethinking relations with Moscow. It is even about the possible lifting of sanctions: after all, the Germans are very concerned about the trade turnover between Germany and Russia. 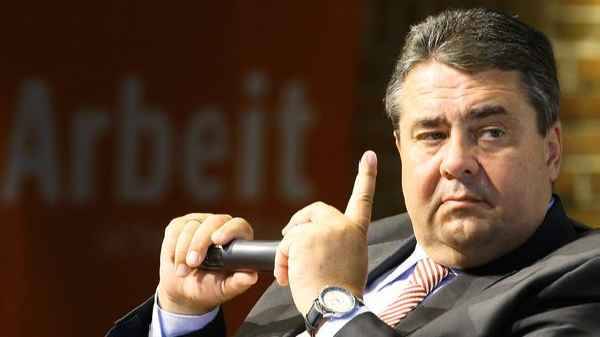 “German journalists officially notified 28-29 of October on the visit of Sigmar Gabriel to Moscow on October 1 only on the day of his departure. The German government darkened to the last ", - writes Deutsche Welle.

And the details: “October 27 in 19 hours and 17 minutes Central European Time about the upcoming meeting the next day, Vladimir Putin with the Vice-Chancellor of Germany, reported the Interfax news agency with reference to the press secretary of the Russian president.

In 29 minutes — now with reference to Interfax — the German agency dpa told about this. And the press service of the Ministry of Economics of the Federal Republic of Germany notified the journalists accredited to the German government and parliament only at the beginning of the tenth morning on Wednesday, when the vice-chancellor’s plane was preparing to take off. ”

As you can see, the German press was simply amazed by this attitude, if not shocked. No joke - german news German journalists will learn ... from the Russians!

Had October 28 German Wave to construct a “report” on the meeting of Gabriel with Putin, referring to the same “Interfax”.

The Vice-Chancellor of Germany, Minister of Economy and Energy Sigmar Gabriel, noted in the material, met with Russian President Vladimir Putin. They discussed conflicts in Ukraine and Syria, as well as the gas issue, including the transit of gas through Ukraine.

“We have embarked on a good negotiating path on this issue. In order to limit political interference in these issues, it is necessary to ensure, resolve, resolve the issue of Ukraine’s role as a transit country even after 2014 of the year, ”the agency quotes Gabriel as saying with reference to Interfax.

Sigmar Gabriel stressed that maintaining Ukraine’s status as a transit country is a condition for the implementation of the Nord Stream-2 project.

The President of the Russian Federation noted the drop in commodity turnover between the Russian Federation and Germany, and also spoke about the interaction of the two states in the international arena: “As for our cooperation in the international arena, it continues quite intensively, although on rather narrow topics, but, nevertheless, work is coming And in this connection, of course, I cannot help mentioning the most sensitive topics - these are also Ukrainian problems, these are problems of the Middle East. ”

No details of the negotiations. And if not, assumptions and forecasts appeared in the analytical circles. One such forecast was published on the website of the American Brain Trust. "Stratfor".

According to experts, the visit of the vice-chancellor to Moscow testifies to the reconsideration of relations with Russia by Germany.

Analysts at the Stratfor research center are confident that, once the official purpose of the visit was to discuss bilateral trade, it was a question of sanctions. Experts suggest that the parties could touch on questions about ways to mitigate prohibitive measures against the Russian Federation, and even talk about the lifting of sanctions.

The material “Stratfor” indicates that in only half of 2015, the supply of German products to Russia decreased by 31,5% compared to the corresponding period of 2014.

The issue of Germany’s energy cooperation with Russia was also probably important. It is known that Sigmar Gabriel had previously discussed with the owners of Gazprom an infrastructure project to expand the Nord Stream.

Stratfor analysts note that today Germany is considering Russia as a key player in the resolution of the crisis in Syria. The fact is that the conflict in Syria is directly related to the growth of migrants to Europe, including to Germany.

American experts think that Berlin’s attitude towards the B. Assad government was softer than that of the United States and a number of Western European states.

As for the reasons for easing the sanctions, among those analysts call the relatively stable situation in Ukraine over the past months.

In addition, Stratfor believes that not only Germany, but also Italy and France would support improved relations with the Russians.

On the other hand, Washington and many states of Central and Eastern Europe are not ready to move away from the former "hard" positions with respect to Moscow.

Julia Smirnova in a large newspaper «Die Welt» notes that a personal meeting between the Minister of Economy of a foreign country and Vladimir Putin is most likely an exception to the rule. According to the correspondent, Sigmar Gabriel seems to Putin "both important and useful." After all, two of them spoke in the Moscow region residence in Novo-Ogaryov about all the most important topics: the economy, and about Syria, and about Ukraine, and about anti-Russian sanctions.

The curious journalist seems to be the following fact: even before meeting with Putin for several months, Z. Gabriel “demonstrated readiness for compromises with Russia,” and his desire for such compromises was far superior to what Russian Chancellor Angela Merkel could offer. True, Gabriel got it for his wording: the head of the Social Democratic Party, after he proposed loosening the sanctions against Russia, was criticized, and since then he began to speak “more carefully”.

There is one more curious thing: in his statements, Herr Gabriel always tried to make it clear: his opinion “does not coincide with the position of the EU and the administration Chancellor Merkel”.

And now, at a meeting with Putin, Gabriel said that his personal opinion is this: you need to "look for new ways to restore cooperation between Germany and Russia." Then, speaking no longer with Putin, but with German journalists, Herr Gabriel spoke in favor of a “gradual abolition” of anti-Russian sanctions (also “opinion”).

Finally, Gabriel commented on the situation in Ukraine, while not expressing criticism of the Russian Federation. Then he spoke about Syria, also not intending to criticize the Russians.

The Minister called the situation in Ukraine “a symptom, not the cause of the problems”. Syrian President Assad, according to Gabriel, is not the only problem in Syria. Leaving him "will not lead to the resolution of the conflict."

As for the official position of Berlin, we add from ourselves, we know: they do not intend to cancel the sanctions there. The head of the Federal Chancellor's Office, Peter Altmayer, said this the other day.

Commenting on the next interview of the Vice-Chancellor of the Federal Republic of Germany Sigmar Gabriel, who proposed to lift the sanctions because of the important role of Moscow in resolving the Syrian crisis, Altmayer сказалthat the German government does not intend to lift the economic sanctions against Russia. The role of Vladimir Putin is indeed important, but “this does not mean that we will change our position on the Ukrainian issue,” Altmayer said. He added: "We will not give in to blackmail."

Gabriel’s “Personal Opinions” on the role of Russia and the lifting of sanctions are logical and understandable.

Chancellor Merkel’s trust rating in Germany continues to fall, and against this backdrop to political competition, Herr Sigmar Gabriel, the chairman of the SPD, and at the same time the vice-chancellor, сообщил on the nomination of his candidacy for the post of Federal Chancellor. And expressed confidence in his election victory.

Presumably, if the parliamentary elections of 2017 of the year make adjustments to the alignment of the political forces of the Federal Republic of Germany, prohibitive measures against Russia can indeed be lifted. But not before.

Observed and commented on Oleg Chuvakin
- especially for topwar.ru
Ctrl Enter
Noticed oshЫbku Highlight text and press. Ctrl + Enter
We are
The cadre maneuvers of the German Social Democrats lead to the preservation of the current political course of BerlinResults of the week. “No, the military is not a profession. This is a sexual orientation ... "
Military Reviewin Yandex News
Military Reviewin Google News
27 comments
Information
Dear reader, to leave comments on the publication, you must to register.