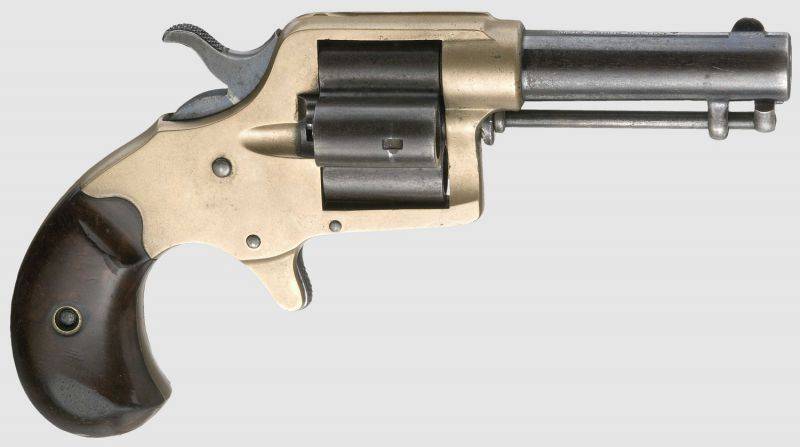 Starting the release of revolvers for cartridges with a metal sleeve, the Colt company almost immediately began to manufacture small revolvers designed for self-defense. Perhaps one of the first such revolvers was the Colt Cloverleaf House Model. It was a kind of alternative to the popular derringers.

Weapon It was made between 1871 and 1876, and a little less than 10 000 revolvers were produced. The Colt Cloverleaf House Model uses ammunition with a short 0.41 metal sleeve for ring-ignition caliber. 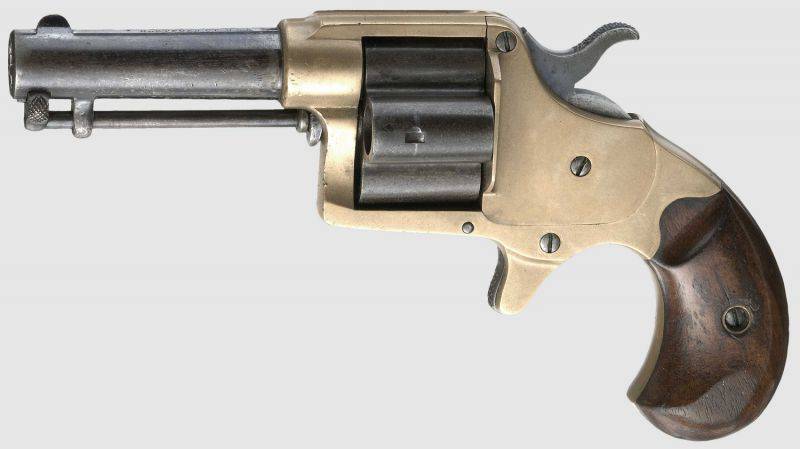 In the Cloverleaf House Model revolver a closed frame design was applied. It was the first revolver of the Colt company, made for a unitary cartridge with a closed frame. Thanks to this design, the weapon turned out durable and reliable. The frame of the revolver, as a rule, was made of bronze or steel with nickel-plated finish. On the left side of the frame there is a cover for access to the details of the firing mechanism. The cover is fastened with screws.

The handle of the revolver is folded forward and resembles the head of a bird or the beak of a parrot. The cheeks are made of walnut lacquered or rosewood. The cheeks are mounted in a frame with a screw. Single-action revolver trigger mechanism with external trigger position. The trigger of the nipple type, in the stowed position is closed by a protrusion of the lower part of the frame. 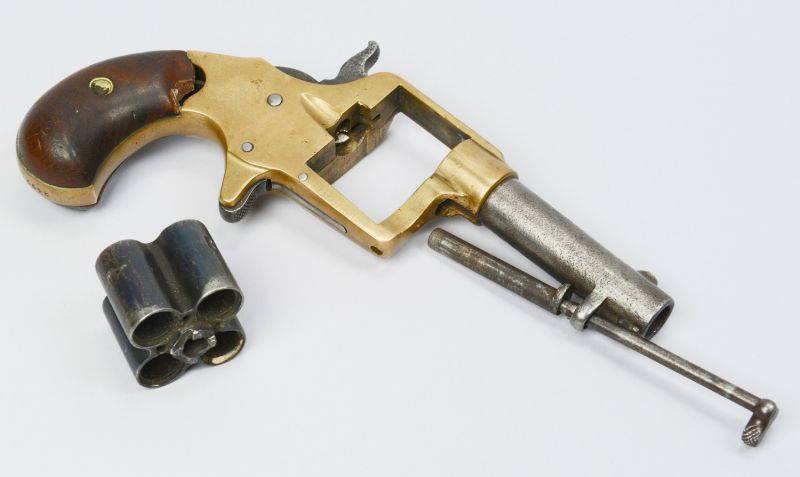 Colt Cloverleaf House revolver drum Model is mounted on an extractable axis. In the cavity of the axis is placed a ramrod, which serves to alternately extract the spent cartridges from the drum chamber. 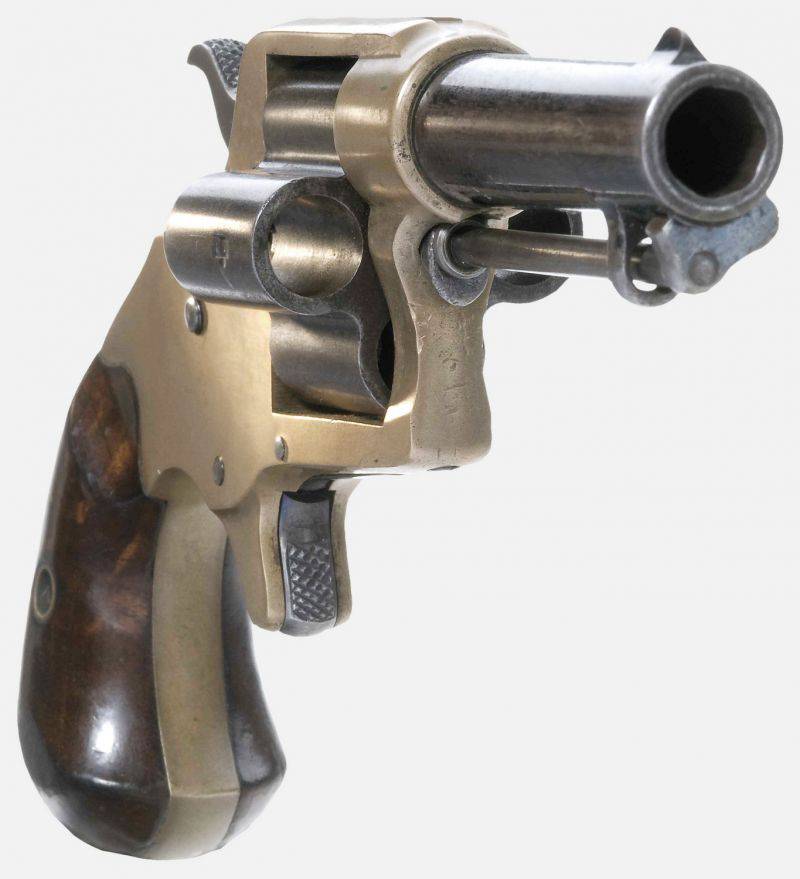 The Colt Cloverleaf House Model revolver owes its name to the peculiar shape of the drum. When viewed from the front or back side, the four drum chambers resemble a clover leaf (Cloverleaf). 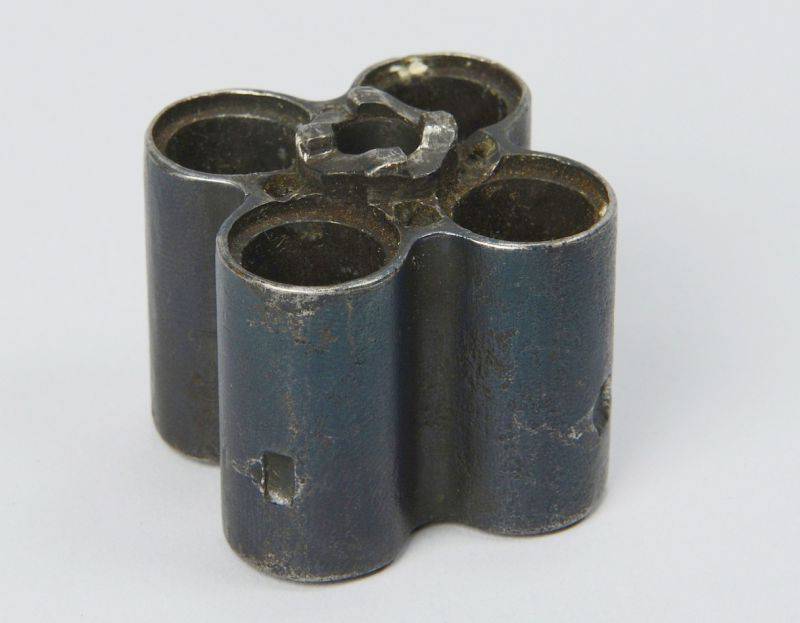 Four-shot revolvers are extremely rare, it is even possible that the Colt Cloverleaf House Model is the only such weapon. The chambers on the back side have grooves for placing the edges of the sleeves. On the back of the drum is installed ratchet rotation mechanism. On the outer side surfaces of the chamber are made grooves for the protrusion of the drum lock.

Serial numbers are usually printed on the lower part of the barrel at the chamber and the shank of the weapon grip. 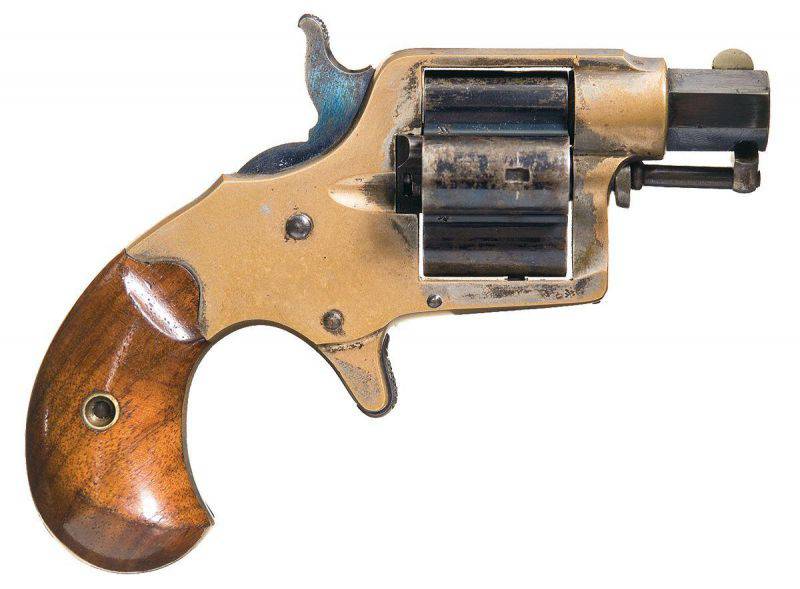 Speaking about the varieties of the Colt Cloverleaf House Model revolver, we can distinguish several basic external features by which this weapon is classified: the length and shape of the barrel, the material from which the frame is made, the shape of the trigger and the capacity of the drum. 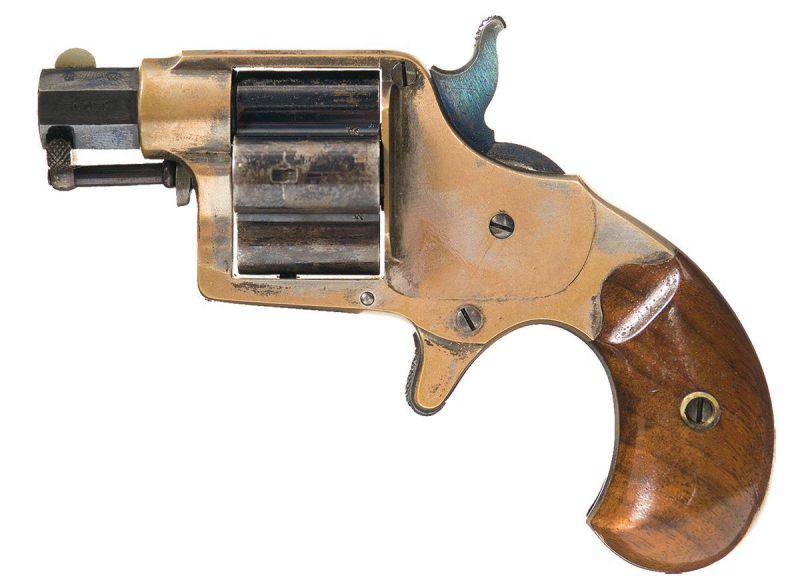 The first variety can be attributed to revolvers with a barrel length 38 mm. The frame of the revolver is made of bronze, the barrel, the drum, the firing mechanism, the ramrod with the axis of the drum are steel, covered with burnishing. The knitting needle high, in the uncovered state, closes the aiming line. 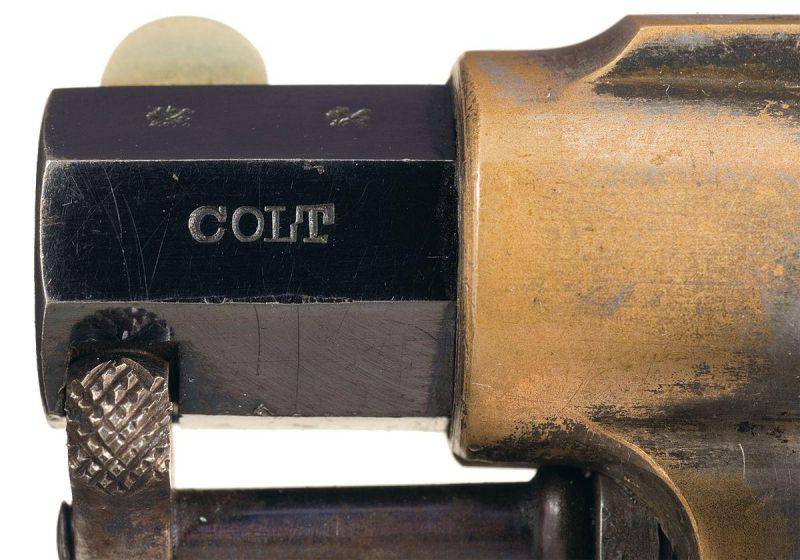 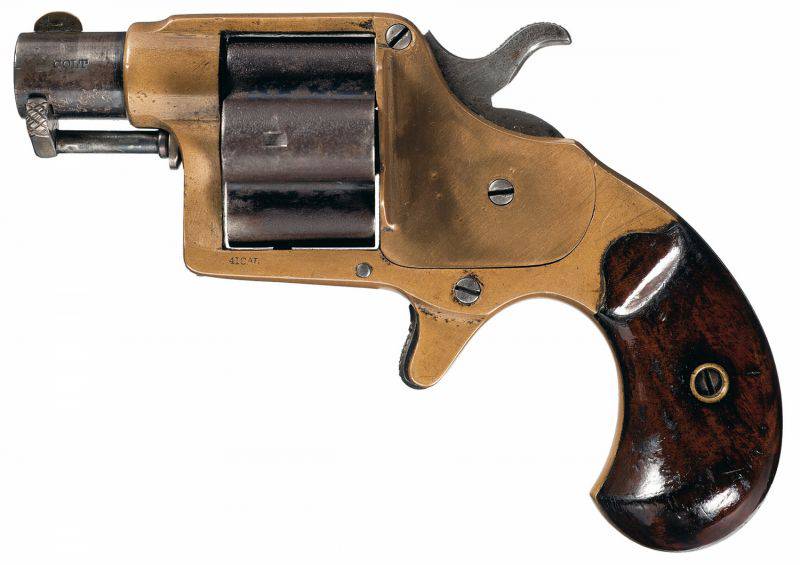 The second type can be attributed to revolvers with a barrel length 38 mm with a bronze frame. On the left side of the frame, under the drum, there is a marking indicating the caliber of the 41 CAL used ammunition. 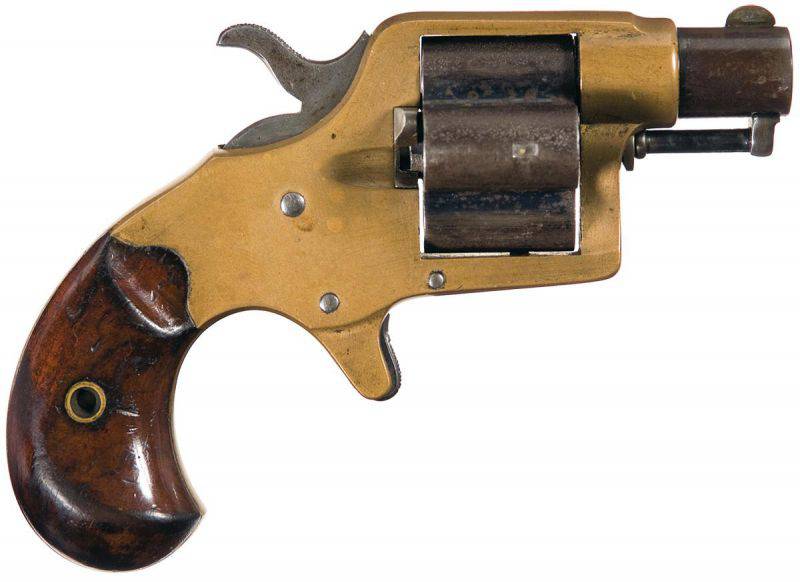 In later models of revolvers, the trigger needle has a more curved shape, which greatly facilitates the removal of weapons from clothing pockets. 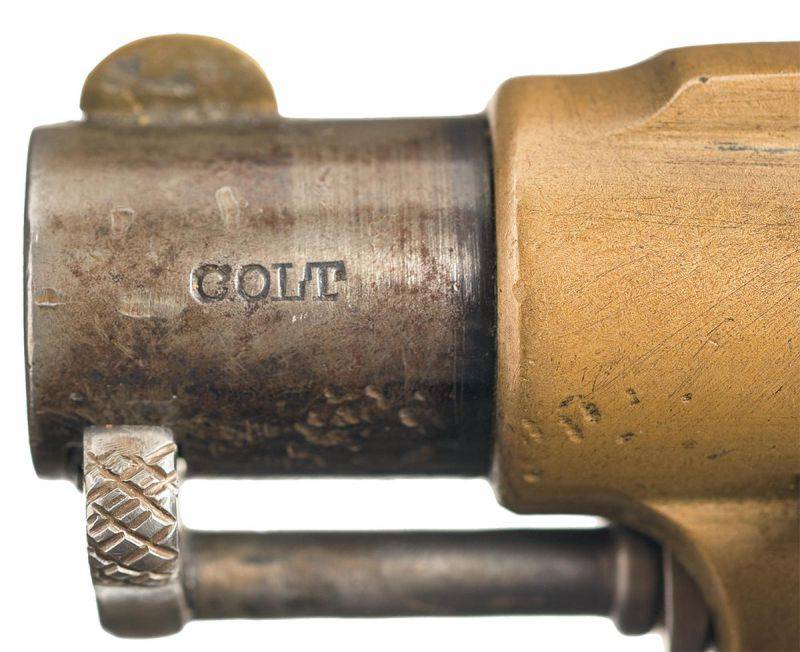 The barrel has a circular cross section labeled "COLT" on the left side. 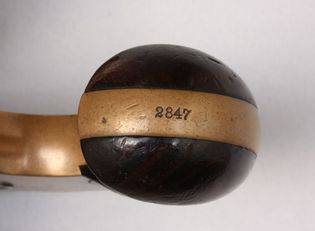 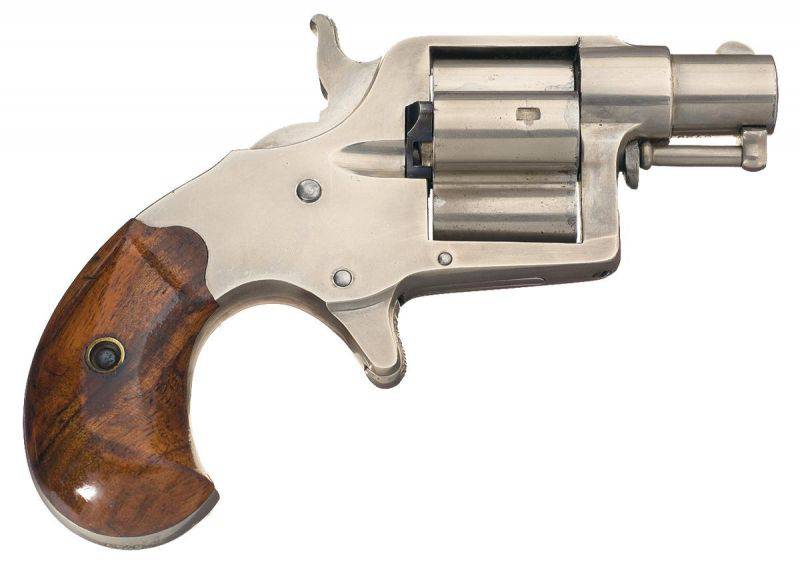 Revolvers with a short barrel of circular cross section are also found with a nickel-plated frame. 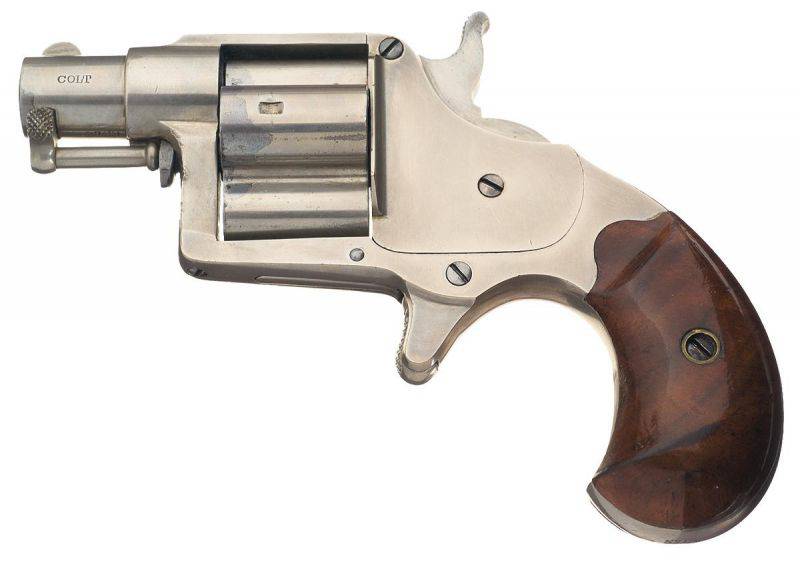 This revolver has an early-style trigger needle protruding above the aiming line in the stowed position. 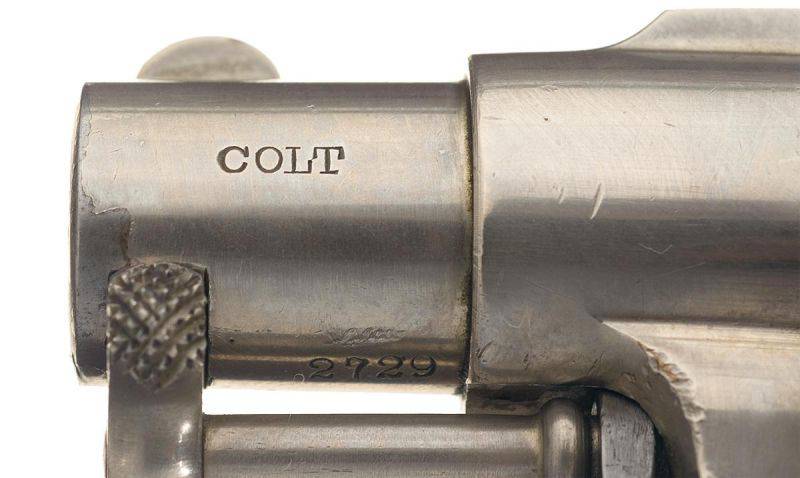 Marking is similar to the previous revolver. The serial number of this weapon is 2729. 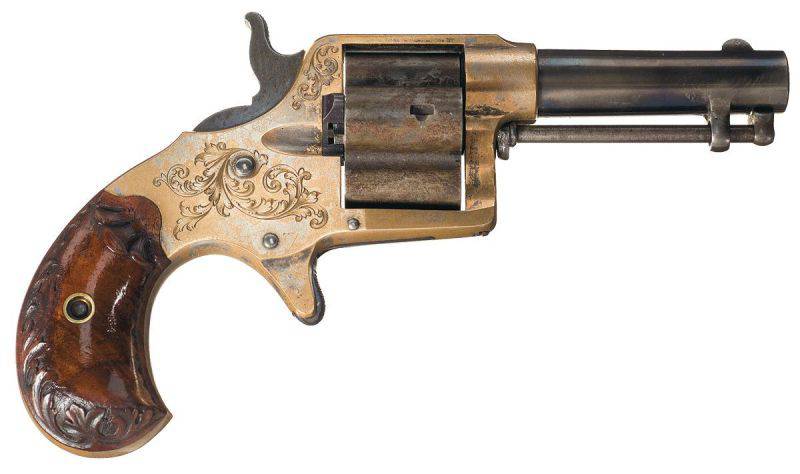 The next type is revolvers with a barrel length 76 mm. Barrel round section. Under the barrel is fixed guide sleeve for the ramrod extractor. 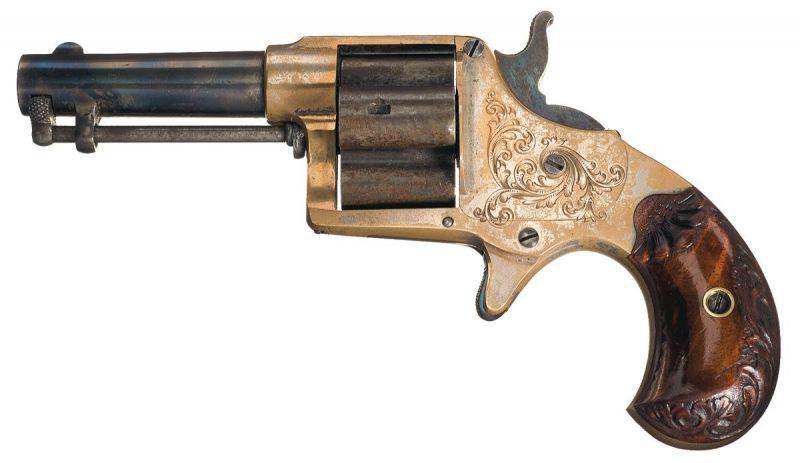 The frame of a revolver is bronze, covered with an engraving of a vegetative ornament. The rest of the metal parts are coated with bluing. The total length of the weapon with a three-inch barrel is 265 mm, weight 450 grams. 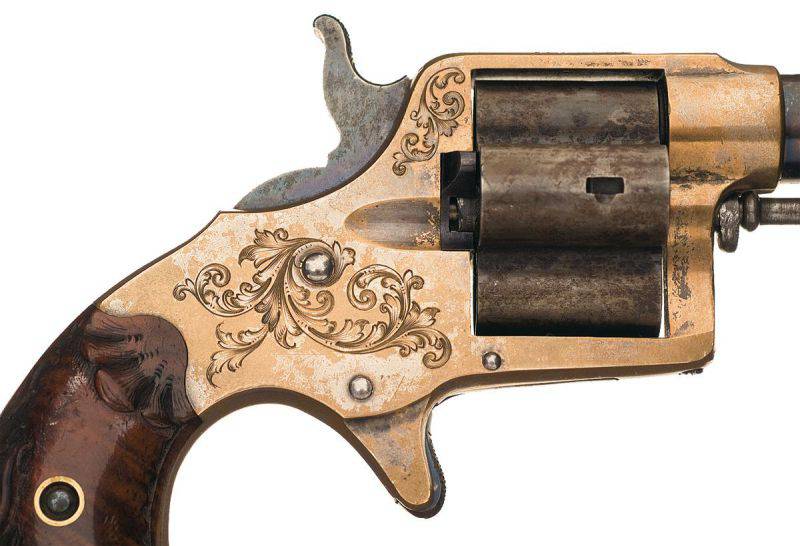 On the right side of the Colt Cloverleaf House Model revolver, a slot is made for equipping the drum drum cartridges with cartridges. This groove covers a special lever, a prototype of the frame door. Equipping with cartridges is also possible when the drum is completely removed from the weapon. 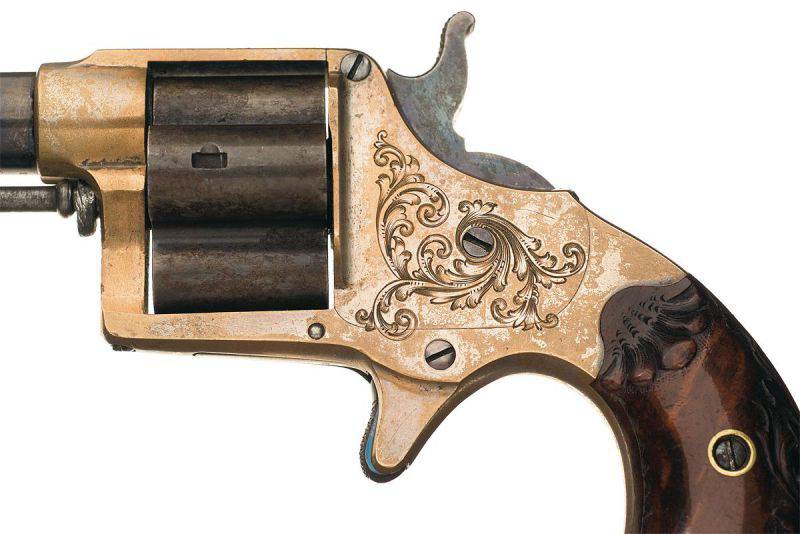 Spoke trigger early style, acting over the line of aiming. 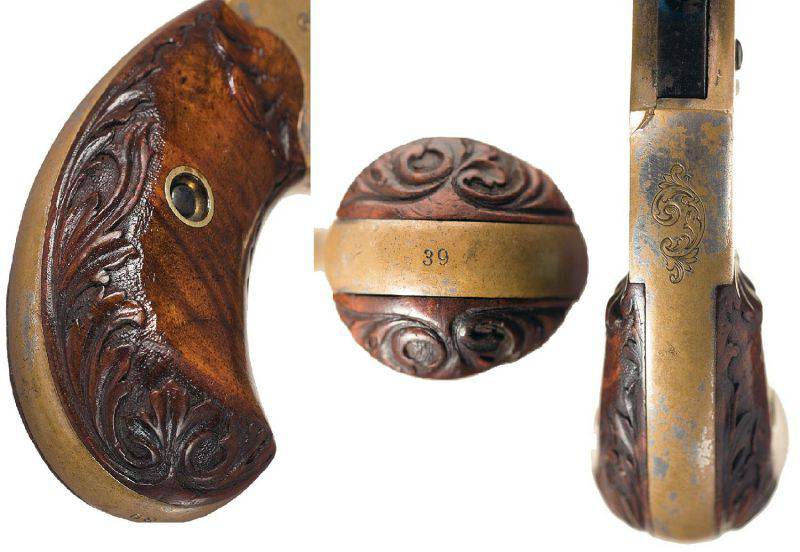 The cheeks of the handle of this revolver with the serial number No.39 are carved, probably made to order. 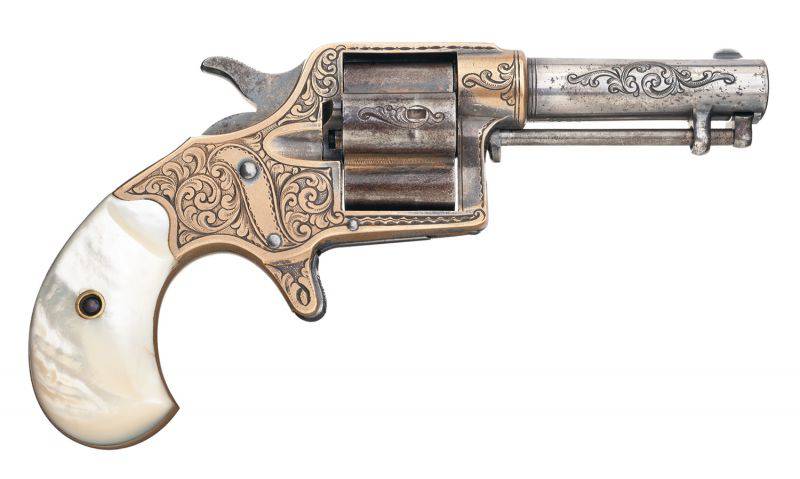 The revolvers of a later release had a red-pointed trigger. She became more curved in the direction of the back side of the handle. The framework of revolvers could be bronze or nickel-plated. 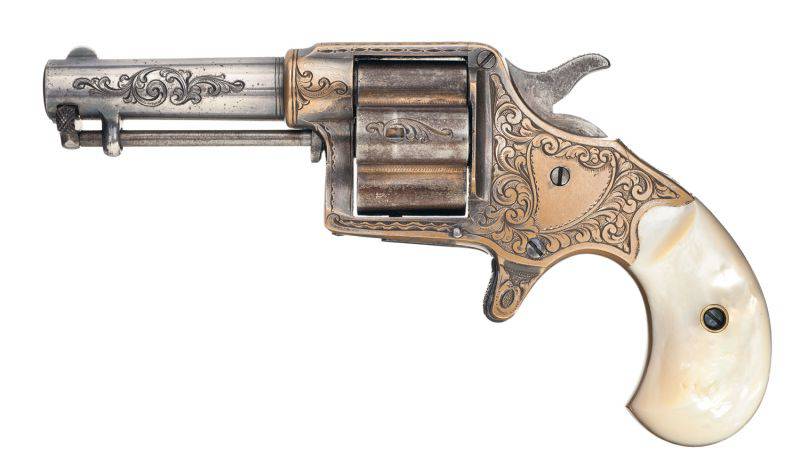 This weapon is made in an unusual design. The frame is bronze, but decorated with a rich engraving. The barrel and the drum were also engraved and covered with silvering and gilding. 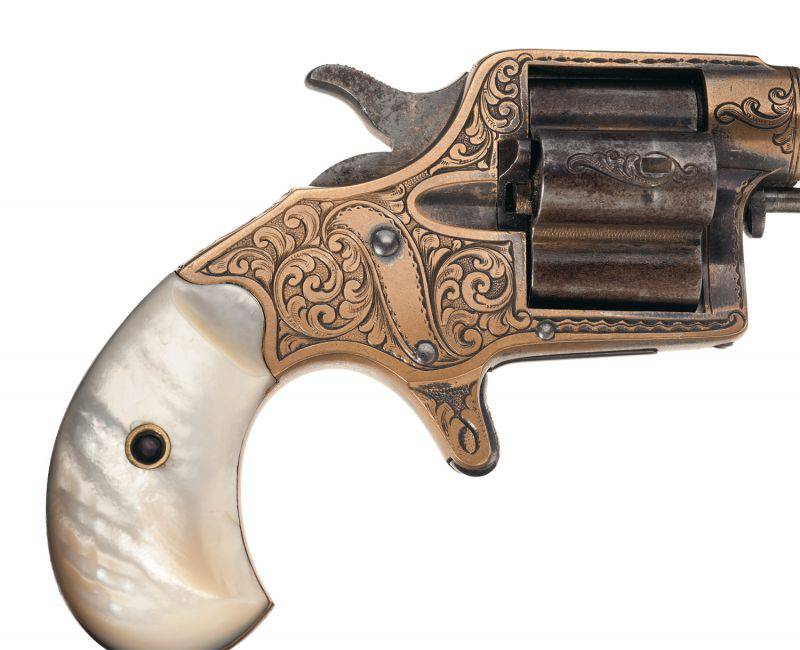 The cheeks of the handle, in contrast to the weapons of ordinary execution, are made of mother of pearl. 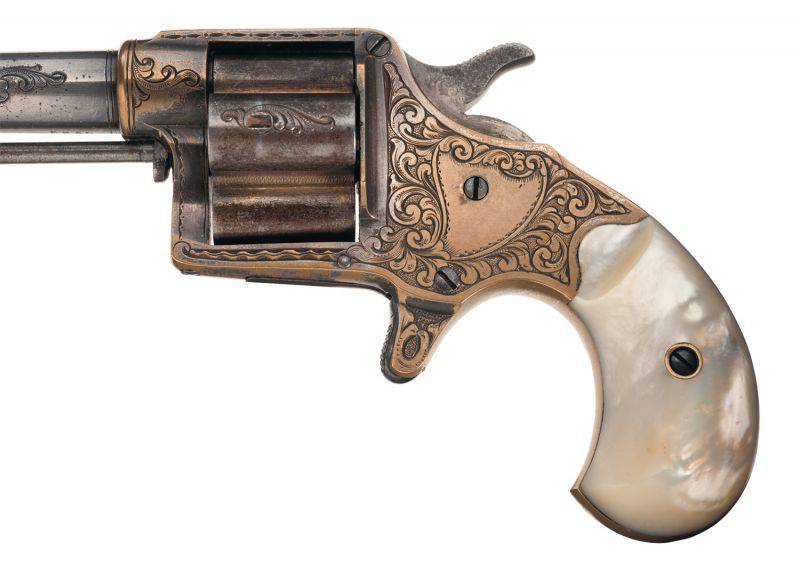 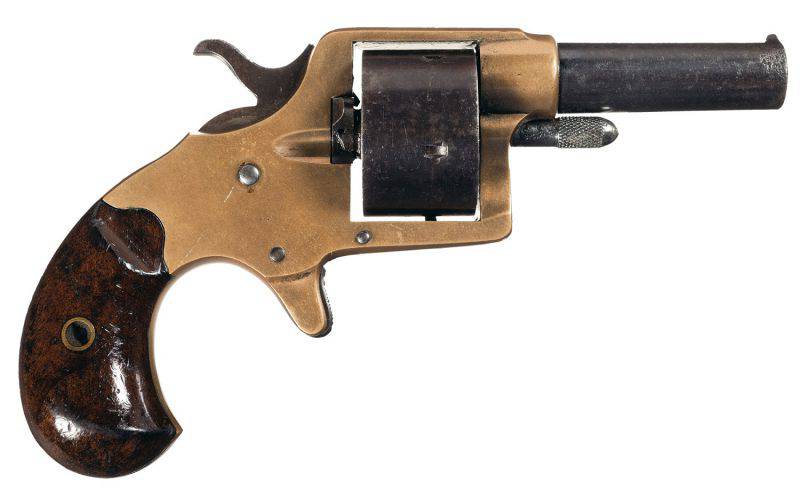 After the 6100 serial number, the Colt Company launched the five-shot revolvers Colt Cloverleaf House Model. The drum has acquired the traditional shape in the form of a smooth cylinder. The barrel of the revolver has a round cross-section and a length of 67 mm. The frame is still bronze or nickel plated. 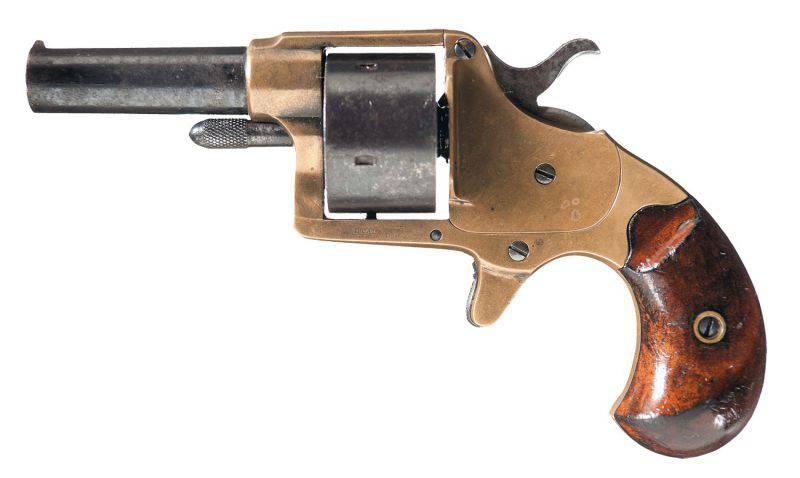 The weapon has changed the shape of the front sight and the design of the axis of the drum. At the new revolver the ramrod-extractor disappeared. Now, to extract the spent cartridges it was necessary to use either auxiliary tools or remove the drum. 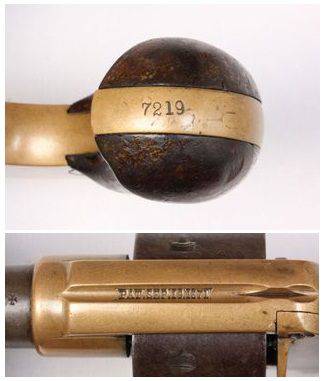 At the top of the barrel marked in the form of text in two lines "Colt's House Pistol / Hartford Ct. USA. ” Images of Maltese crosses are printed before and after the text. 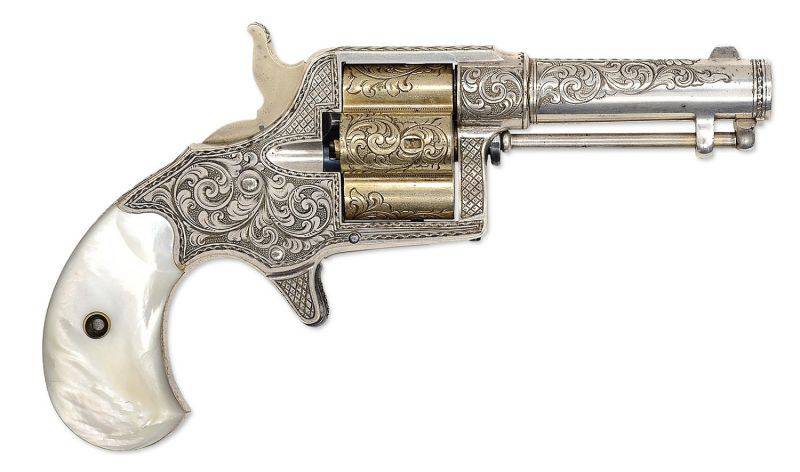 Revolvers Colt Cloverleaf House Model produced in piece performance by special order. The cheeks of the arms of such weapons were made of mother of pearl or ivory. The metal parts were covered with rich engraving and precious metals. 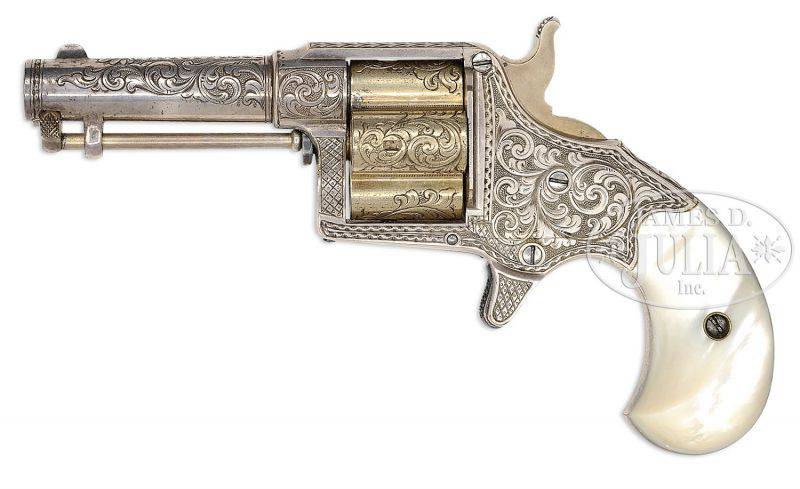 The revolver presented in the photo has a silvered frame and a barrel. The trigger and drum arms are covered with gold trim.

In the upper part of the revolving barrel, the usual marking is marked, surrounded by the Maltese crosses “Colt's House Pistol / Hartford Ct. USA. ” 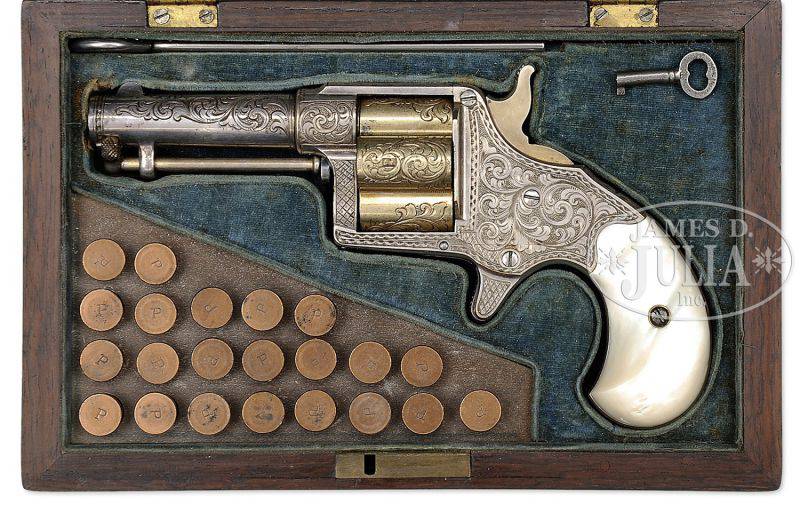 This revolver Colt Cloverleaf House Model, along with an original box made of rosewood and a set of ammunition, was put up at one of the gun auctions. Its owner requested for a lot from 25 000 to 40 000 dollars. Of course, the cost of revolvers in the ordinary version is much less, but as a rule it is not lower than 2000 dollars.