The fate of Syria is being decided

November 3 2015
25
In Vienna, negotiations were held to resolve the situation in Syria. The meeting participants reached agreements on a number of issues. Nevertheless, the negotiators in the coming days will continue to work. The main agreements relate to the preservation of a united Syria and its state institutions, support for Syrian refugees and the destruction of the “IS”. The parties also agreed that the fate of Syria should be decided by the Syrians. However, the election is not bypassed. 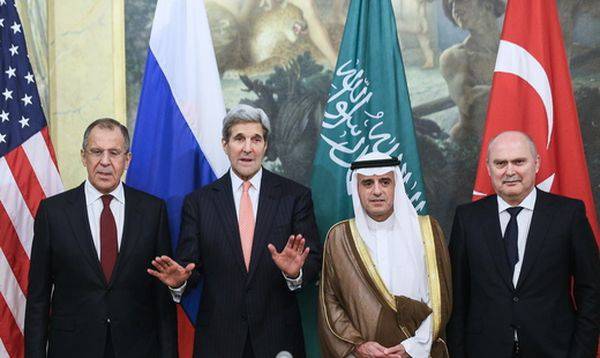 A meeting of foreign ministers of the countries participating in multilateral negotiations on Syria was held in Vienna, in which 19 delegations from Russia, the USA, Saudi Arabia, Turkey, Iran, the United Arab Emirates, Qatar, Jordan, Germany, France, Egypt, Italy, Great Britain, Iraq and Lebanon participated . According to InterfaxThe special envoy of the UN Secretary-General for Syria, Staffan de Mistura, and the head of the EU foreign affairs service Federica Mogherini also joined the negotiations.

As noted by RIA News"The participants in the Vienna talks reached agreement on a number of points, which were then listed in the communique.

The agency lists the most important points of the agreement: Syria remains a single, independent and secular state; its state institutions will operate intact; the rights of all Syrians should be protected regardless of their ethnic and religious affiliation; diplomatic activities to end the conflict will be strengthened; with the participation of the UN, the possibilities of achieving a pan-Syrian armistice will be studied in parallel with the resumption of the political process.

A special point of the communique was devoted to the humanitarian situation: the negotiators agreed that it was necessary to increase support for internally displaced persons in Syria, Syrian refugees and their host countries.

In addition, representatives of the Syrian government and the opposition have to agree under a UN auspices on a trustworthy government, including representatives of all religious groups. Then a new constitution should be adopted and free elections held under the supervision of the UN. All Syrians should participate in them, including those living abroad.

The fate of Syria will decide the Syrian people. However, the question of the future of President Assad remained open. Some participants of the meeting demanded his departure. But others said that the decision on the fate of Assad should be taken by the Syrians themselves.

The assessment of the negotiations by the main political players is already known.

US Secretary of State John Kerry welcomed the chances of a settlement.

“I know that it is very difficult, and today we were able to see this during the negotiations. But I believe that the chances of a diplomatic settlement are now much higher than they were before, ”the RIA Secretary of State quoted as sayingNews».

According to Kerry, "IS" and other terrorist groups "can not be allowed to unite and rule Syria."

"We want to stop this situation and not allow terrorists to seize power in this country ... We have a common enemy, and we need to make sure that this enemy cannot seize power either in Syria or in any other state", - The Russian Foreign Minister agreed with his colleague.

Following the talks in Vienna, Russian Foreign Minister Sergei Lavrov told reporters that at a meeting to resolve the Syrian crisis, an agreement was reached on creating a new constitution for Syria and on holding elections under UN control. The meeting participants agreed that Syria should remain a single country. It is proposed to involve representatives of the SAR and the opposition in negotiations on the settlement. “This political process should lead to an agreement of the parties to jointly create an inclusive structure that will allow us to work together to resolve issues of the country's life, prepare a new constitution and hold general elections,” Lavrova quotes. "Lenta.ru".

Comrade Lavrov said that the fate of President Bashar Assad remained a subject of disagreement between Moscow and Washington. However, Russia's position has not changed: "... the Syrians themselves must decide this issue in the context of the political process."

The negotiators also discussed the fight against the "IG" and other groups, which the UN Security Council considers terrorist.

The next meeting of negotiators, according to Lavrov, will be held "no later than two weeks."

Maria Zakharova, official representative of the Russian Foreign Ministry, appeared in the press.

In her opinion, the outcome of the multilateral meeting on Syria held in Vienna is a victory not for Russia, but for common sense. Zakharova said this in an interview with V. Solovyovu on the TV channel "Russia 1". “I read a lot of different assessments, there is“ the victory of Russia ”... I think this is a victory of common sense. We initially, four years ago, proceeded from the fact that the Syrian settlement process should be inclusive, that is, all interested parties should be included in the process, ”Zakharova quotes TASS.

She also clarified that Russia submitted a list of almost forty groups and organizations of the Syrian opposition that are not extremist or terrorist. The list was given to foreign partners: “Now the ball is on their side. They should look, someone might add, disagree with someone. But our list includes almost all the forces that are healthy from the point of view that they do not use either extremist or terrorist methods to defend their political interests. ”

The negotiators should arrive at the new multilateral meeting in Vienna when developments are made on the issues agreed upon at the last meeting. Therefore, the date of the new round of negotiations has not yet been determined, said Zakharova.

Finally, Zakharova rejected the suggestion that settlement negotiations failed because the parties did not reach agreement on B. Assad’s fate: “I would say that the ideas of those who planned to reduce everything to Assad’s fate failed. His fate will be decided by the Syrians. "

Thus, after the decisive actions of Russia against the Islamist militants, the “warriors of Allah” fled from Syria by the thousands - and international diplomacy immediately began to stir. Washington had to admit that Russia plays a large role in international politics and to make some compromises. Recall, recently, the White House abandoned the obsessive idea of ​​"leaving Assad." And even though this issue has not been removed from the agenda, now it will not be John Kerry who will decide it, but the Syrian people.

Observed and commented on Oleg Chuvakin
- especially for topwar.ru
Ctrl Enter
Noticed oshЫbku Highlight text and press. Ctrl + Enter
We are
Refugees from Syria. Will Russia accept immigrants from the Middle East?Turkey: fighters for democracy came together
Military Reviewin Yandex News
Military Reviewin Google News
25 comments
Information
Dear reader, to leave comments on the publication, you must to register.