Great sand wall as a pretext for war 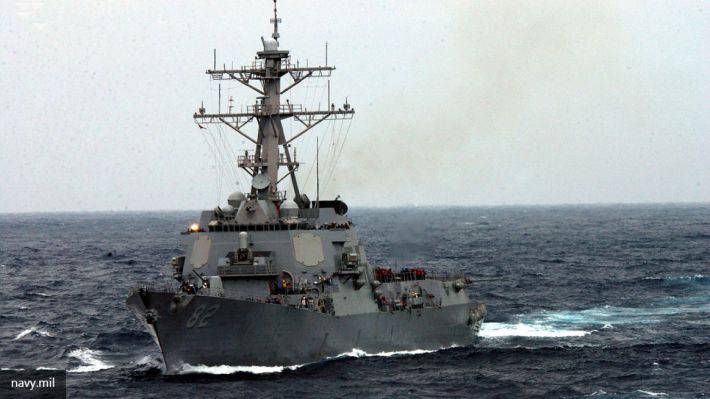 “War” was the word spoken by the Commander of the Navy of the People’s Liberation Army of China (PLA) Wu Shengli in conversation with his American counterpart, who recently headed the headquarters of the US Navy, Admiral John Richardson.

According to the Chinese military, Washington’s “provocative” actions in the South China Sea (YCM) put the world on the brink of a large-scale conflict: “A minor incident could provoke a war.” This frightening statement was made a bit later when the Deputy Minister of Foreign Affairs of the PRC, Zhang Yesui, summoned the United States Ambassador Max Bocus to hand him a note of protest in connection with the actions of the American destroyer in the SCM.

It was the passage of the US destroyer USS Lassen in the 12-mile zone from one of the islands controlled by China that caused such a storm of emotions. The fact that the US Navy ship approached an artificial island - a piece of land created by the PRC within the boundaries of the Spratly Archipelago - adds spice to the incident.

However, the ownership of the Spratly Islands raises many questions. Scattered throughout the South China Sea, these small pieces of land are controlled by various countries, and their territorial affiliation is disputed by at least five powers: China, Vietnam, the Philippines, Malaysia and Brunei. The largest natural island of the archipelago - Itu Aba - is controlled by the Republic of China, that is, the island of Taiwan, which does not recognize the rule of mainland China.

China, constructing artificial islands in the UKM water area, is seeking to expand its water area under control - after all, the 12-mile zone (approximately 22 km.) Is considered the territorial waters of the country, that is, the area over which the coastal state of the UNN 1982 g .).

“China is actively building islands, taking sand onto coral reefs. At the moment, the Chinese have already created about 4 square meters. km of land, - said at the beginning of 2015 the commander of the Pacific fleet US Admiral Harry Harris. This construction of the “great wall of sand” cannot be described otherwise than as provocative in relation to other states of the region, ”he said.
However, according to the UN Convention on the Law of the Sea, signed and ratified by China, “artificial islands ... do not have island status. They do not have their own territorial sea, and their presence does not affect the definition of the boundaries of the territorial sea, the exclusive economic zone or the continental shelf. ”

The only thing that can do the state to which this artificial island belongs is to establish a security zone that cannot extend more than 500 m from land borders (article 60). Moreover, it is possible to build such alluvial structures only in the exclusive economic zone (EEZ) - an area of ​​the sea that extends from the coastline of the state to a maximum of 200 nautical miles (about 370 km), which is enshrined in the article 56 of the Convention. True, the 80 article extends this right to the continental shelf.

But in the disputed areas of the water area of ​​the SKME, the EEZ and the territorial shelf are not internationally fixed. All countries involved in the conflict believe that only they have rights to one or another part of the water area. China also created its alluvial structures on the shallows, reefs and bottom elevations, which, according to Manila, are part of the continental shelf of the Philippines. In addition, some man-made structures are located in close proximity to natural islands controlled by Vietnam. According to the UN Convention on the Law of the Sea, the parties should not take actions that would violate the status quo in the disputed areas. Thus, in fact, on all points of the Convention, signed and ratified by it, Beijing violates the norms of international law.

This is successfully used by the Americans, who in an effort to win over the countries of Southeast Asia, tied up in conflict with China, flirt with Vietnam and the Philippines, Beijing’s main opponents in the SCM. Back in 2010, the then Secretary of State of the United States, and now one of the candidates for the presidency of the country, Hillary Clinton declared Washington’s national interests in relation to the South China Sea and its readiness to mediate between the parties to the conflict. Nevertheless, the US is not so eager to become a mediator, as many countries want to drag into the orbit of its influence, which oppose the illegal actions of Beijing in the waters of the important sea. And China’s aggressive actions only help Washington.

Vietnam, two decades ago only restored diplomatic relations with the United States, is increasing diplomatic and military contacts with Washington, expanding economic cooperation. The Philippines - a longtime US ally in Southeast Asia - is modernizing its armed forces with the help of its American partners. And if today “war” sounds only in words, then in the near future it may also materialize, drawing into conflict for the world powers and regional players scattered in the South China Sea.

Ctrl Enter
Noticed oshЫbku Highlight text and press. Ctrl + Enter
We are
Parallel to the westRussia is unlikely to avoid China’s expansion in one form or another.
Military Reviewin Yandex News
Military Reviewin Google News
10 comments
Information
Dear reader, to leave comments on the publication, you must to register.