Project "ZZ". The case of Angela Merkel lives and wins

November 2 2015
57
The upholding of genuine “European values” by Angela Merkel has already reached the “existential” level, some Western observers say. The German Frau Chancellor is not a lady from the past. Her political age does not end. On the contrary, it leads Germany and the European Union to a brighter future. Angela is waiting for the arrival in his country no longer eight hundred thousand refugees, but a whole million. Analysts say Merkel’s antagonist in Europe is Hungarian Prime Minister V. Orban. 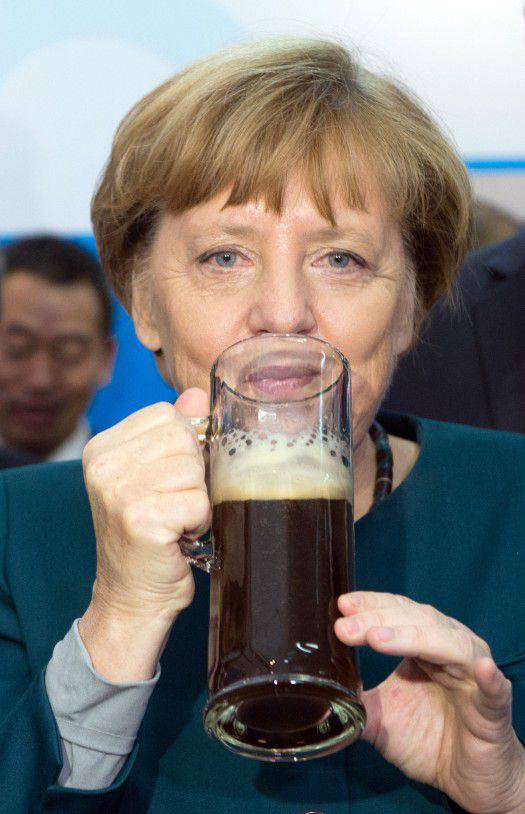 Angela, the image of the bright future of the European Union

Thomas Gutschker in the influential German newspaper «Frankfurter Allgemeine Zeitung» told that "Kanzlerin rechnet mit einer Million Flüchtlingen". This means that Chancellor Merkel is awaiting the arrival in Germany no longer of 800 of thousands of refugees, as was assumed quite recently, but of a million.

Currently, Chancellor Angela Merkel, the journalist notes, expects a total of one million refugees to arrive in Germany this year. The previous forecast of the federal government, according to which 800.000 refugees were expected, is outdated.

According to sources from the Frankfurter Allgemeine Sonntagszeitung, Merkel announced a new number for Germany at a special meeting: a million. The tone of Angela Merkel was quite sharp - probably because representatives of the federal police explained to her that they could hardly cope with the situation on the border with Austria.

Of course, no one expects Germany to accept every refugee. And yet, as the publication further indicates, Angela said: "Now we have to agree on measures to ensure open borders."

After a lengthy discussion, the assembled government officials finally agreed on a seventeen-section plan (17-Punkte-Plan), which envisaged increasing the capacity to accept refugees in the EU countries, along with increased strict controls at external borders.

Angela Merkel's statement about a million refugee politicians was hardly surprised. Back in mid-September, the chairman of the SPD, Sigmar Gabriel, suggested that a million people would find "asylum" this year in Germany.

The SDPG, we add, is against the creation of transit zones for the reception of refugees. November 1 in Germany, due to the issue of refugees, a political conflict has entered a new level, involving three parties of the ruling coalition.

About this, referring to several news agencies, told the magazine Spiegel Online in the "Policy" section.

The meeting of the chairmen of the CDU, CSU and SPD, who discussed on November 1 the “general line of state policy” on the issue of asylum to refugees, did not lead to any concrete results. Negotiations will be resumed on Thursday, said government spokesman Steffen Seibert.

The question of creating transit zones (Transitzonen) for refugees remained open. The SPD rejects the creation of such zones on the grounds that building them on borders is impractical. Let the refugees enter the reception centers established initially.

The chairman of the SPD, Sigmar Gabriel, who participated in the November 1 discussion, refused to make public statements.

Experts from federal and state authorities scheduled further discussions on this issue at the next meeting on Thursday. It is known that in governmental circles there are significant, even fundamental differences in views on the situation. There is even a talk about whether it is not necessary to make changes to the country's constitution.

Disputes of politicians in Germany have not subsided for several weeks. The crisis is growing: thousands of refugees arrive in Germany every day. Only last Saturday, the federal police registered 9.313 people (of which 7.287 - in Bavaria).

Despite the controversy of German politicians, some observers in the United States predict a bright future for the EU from Frau Merkel.

The analyst recalls the same “several weeks” during which allegations are being made in the press about the imminent end of the era of Angela Merkel, which is associated with differences among Frau Chancellor’s party colleagues. In Germany, there is a "panic" because of the influx of a huge number of refugees. Nevertheless, the chancellor does not even think about retirement or anything worse - like the removal of power from disgruntled gentlemen. The journalist believes that the "power" option does not threaten her. Another thing is that it is not easy for her: after all, she is at the leading edge of an “existential battle” between a bright future (his image is Angel herself) and an unbright one (personified by the gloomy Hungarian Prime Minister Viktor Orban).

Many German politicians do not understand Angela. For example, Bavaria’s Prime Minister Horst Seehofer, leader of the Christian Social Union, states that Angela Merkel must deal with refugee flows. How exactly to settle? It's very simple: he believes that the Frau Chancellor should have demanded that Austria cut off the flow of migrants. Herr Seehofer's tone is easy to explain: refugees go to Bavaria. There they first of all settle, waiting for the “move” to other lands. A sociological survey of early October showed that two thirds of Bavarians want to reduce the flow of migrants.

And yet Bershidsky believes that Angela Merkel should not panic.

Despite the fact that the popularity of the CDU has fallen, and probably due to the migration crisis, the differences among the ruling politicians of Germany are not so great. The leader of the SPD, Sigmar Gabriel, for example, shares the position of Angela Merkel regarding migrants.

Panic in the CDU / CSU does not mean that a certain threat looms over the power of the coalition. Bershidsky believes that members of the coalition in fact would themselves prefer to pursue a more stringent policy towards migrants.

Today, Merkel can only restrain in the negotiations with his political allies on the need to "rally the ranks": the political forces of the FRG should rally around her, Frau Chancellor. Otherwise it is impossible, because Angela is fighting outside the country, which determines the country's position in the EU.

The number one antagonist Angels journalist sees Victor Orban - a supporter of the closure of borders for migrants. Recently, the Hungarian prime minister again spoke out against quotas for the distribution of refugees. According to him, the adoption of millions of illegal immigrants without a vote is deprived of “democratic grounds”.

In addition to Orban, Alexis Tsipras from Greece also accuses Angela of violating the principles of democracy.

The most ardent opponents of the immigration policy of the European Union are the states of Eastern Europe. The new Polish government openly opposes migrants. The authorities of those countries that are located on the way of refugees to the north, are considering the introduction of additional measures to stop the influx of migrants. Slovenian Prime Minister Miro Cerar said that if the pan-European plan to curb the flow of refugees does not turn on soon, Slovenia will take its measures to protect the borders.

Bershidsky knows where the outlet is for Angela Merkel.

Germany should give European states a common plan for resolving the problem of migrants. The signing by all parties of such a plan will save the EU from the victory of the right-wing forces on the continent and retain the leadership of Germany in Europe. Centrism in the EU is also not affected. The main thing is that Angela should not deviate from her course: the observer does not believe that concessions to those who demand to limit the flow of refugees are appropriate. The consequences will be bad.

And the conclusion: Angela Merkel is the political force that is destined to determine the future vector of the European Union.

We can agree with the latter, add from myself. If the Frau Chancellor gives in to opponents, some of whom think more about the internal political struggle in the Federal Republic of Germany, rather than about the significance of Berlin for Europe, the question with refugees will be received by the vector that is asked by politicians like Orban. If Angela Merkel continues to insist on her, the migration policy of Germany will allow to keep to some extent the European Union with open borders, to which the Europeans managed to get used in the XXI century. Things are easy - to develop a plan for the refugees and convince him to sign those intractable types that build fences on the borders, in fact breaking up the “united” Europe. And something tells us that today's antagonists Angela Merkel tomorrow will go backwards. Germany, having defended the “European values”, will confirm not only economic, but also political leadership in the European Union.