November 3 2015
38
When you first see an Airbus A300-600ST, the most neutral thing that comes to mind is how strange it is! This aircraft definitely cannot boast an attractive or elegant appearance. Looking at him, you do not even believe that this car can still fly. Airbus A300-600ST (ST stands for Super Transporter) is also known by another name Airbus Beluga. The name Beluga comes from the shape of the body of the aircraft, which by its appearance resembles a whale-beluga whale (English beluga, not to be confused with the beluga). The A300-600ST Beluga is a wide-body jet transport aircraft for the transport of bulky goods. It is a twin-engine nizkoplan with swept wing and single tail fin. Currently, all 5 of such aircraft are released, all of them are operated mainly by Airbus.


The aircraft was first introduced to the general public in 1995, as part of the Le Bourget Air Show. On a hot June 1995 day of the year, tens of thousands of visitors to the legendary air show, with their heads up to the sky, watched the demonstration flights. On the announcement of the cabin announcer that a Beluga transport aircraft was preparing for takeoff, few people noticed that the emotions from previous flights had not cooled. But when this unusual plane flew into the sky, the crowd could not hold back the emotions and exclamations of amazement, which were mixed with universal delight. The Humpback Monster, which on the ground looked so clumsy, easily and gracefully took off, elegantly shook its wings and landed confidently. Landing the plane was met by a storm of applause. Airbus A300-600ST has become a real star at the 1995 air show of the year. 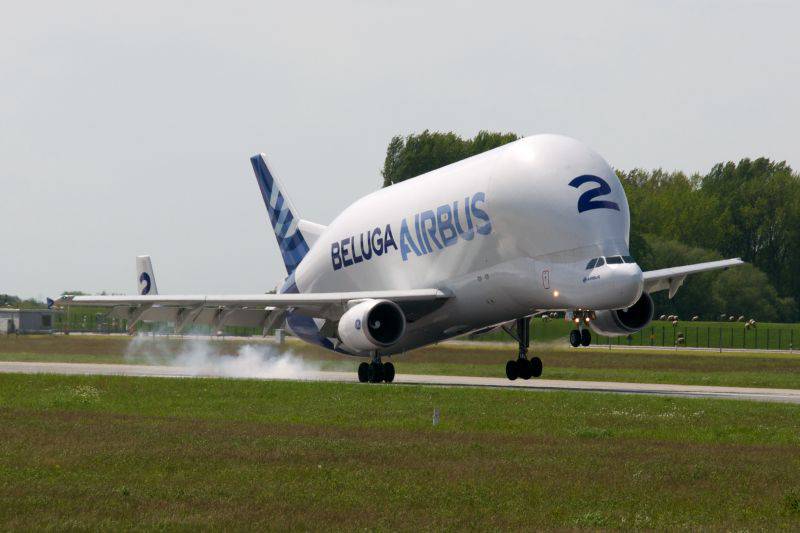 With this project, Airbus hoped to create a new airliner that was supposed to meet the needs of the growing production of the corporation. The aircraft was planned to be used for transportation by air of large-sized parts of fuselages collected by the company of airliners. The car, which received the official nickname Beluga, has replaced the outdated by the time Boeing Super Guppy aircraft. The aircraft manufacturer used these planes to transport parts of the aircraft between the company's enterprises, which were located in different parts of Europe. It is worth noting that in 1990-ies, the intensity of the work of the plants of the Airbus company was so high that the first Airbus A300-600ST made 60 departures a week, traveling between the 11 plants of the company. In the month of the aircraft could make up to 250 departures.

The main purpose of the new transport aircraft was the transportation of oversized cargo. This unusual transporter was created by Airbus specialists on the basis of a typical wide-body glider, which was used for the production of A300 passenger aircraft. Airbus today is one of the largest aircraft manufacturers in the world, occupying a significant part of the market for the production of civilian aircraft. Company enterprises are located in many European countries. The main production facilities of the company are concentrated in Germany, France, Spain and the UK. At the same time, the final assembly of the aircraft is carried out at the company's plants in Hamburg (Germany) and Toulouse (France). Parts of airliners, which are produced in four countries, are transported to the head factories by air for final assembly. The A300-600ST Beluga aircraft was created for their rapid transportation. 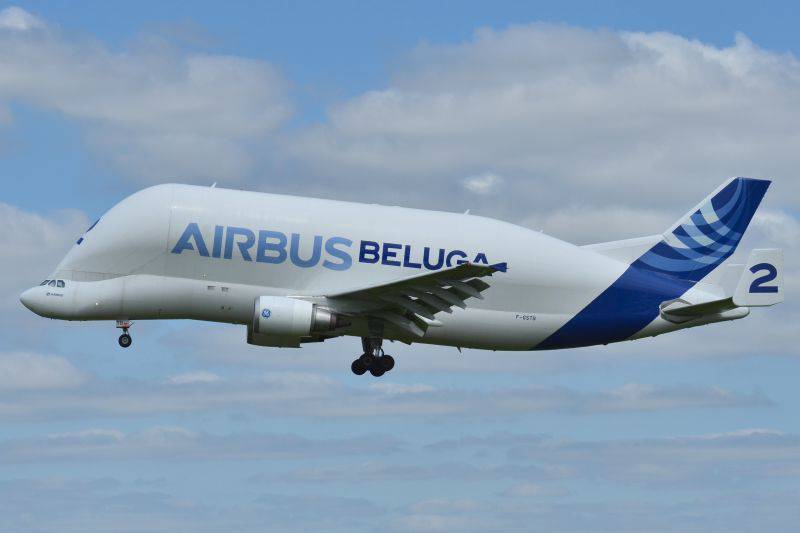 From the very beginning of the project for the production of aircraft under the Airbus brand (as early as 1970-s), four Boeing Stratocruisers aircraft were used to deliver aircraft components, but with the development and expansion of aircraft production, the capabilities of these machines turned out to be insufficient. Therefore, in 1991, the leadership of the Airbus Air Concern decided to create a company that would create a new cargo aircraft designed to transport oversized cargo by air. As a basis, it was decided to use the wide-body twin-engine Airbus A300, which was substantially redesigned for the transportation of air components. The diameter of the cargo section of the fuselage was brought to the 7,1 meter. The front of the aircraft was also changed. For example, the nose section received a completely new design, a special system was installed, which allowed the cockpit to be tilted at the time of loading the aircraft, the tail section of the liner was also strengthened to ensure stability during the flight.

The volume of the cargo compartment of the unusual aircraft was increased to 1400 cubic meters, and the maximum length of cargo transported in the aircraft can be up to 40 meters. The increased diameter of the cargo compartment and payload in 47 tons expanded the capabilities of the aircraft in comparison with those used before the Super Guppy. In addition, the flight speed has almost doubled. On the new aircraft, it was decided to abandon the fuselage "on the clasps." The cockpit and the entire nose was lowered down a bit, so that it does not interfere with the processes of loading and unloading cargo. The semi-automatic loading system installed on the aircraft allows to carry out all the necessary operations even with the largest and most massive cargo in just 45 minutes. 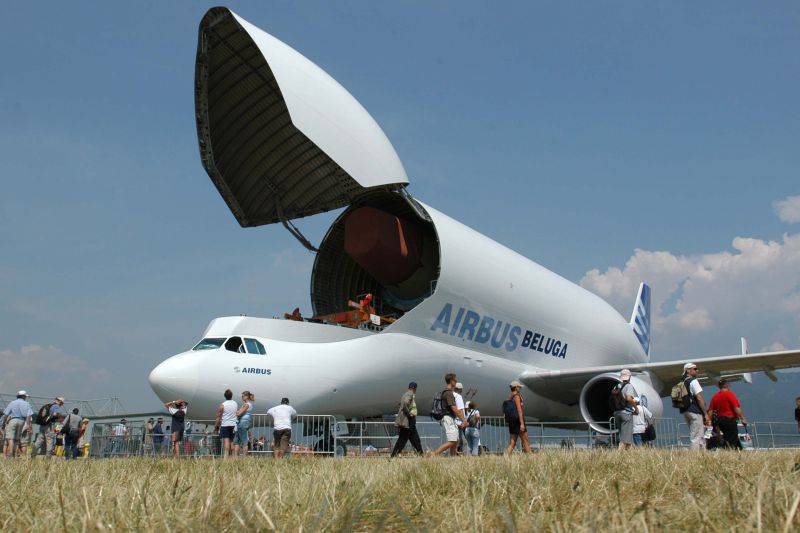 In addition to the main cargo compartment, which is mainly used to transport parts of assembled aircraft, the Airbus A300-600ST has a compartment that can be used to transport standard aviation containers. At the same time, outwardly, Beluga differs very much from its progenitor, although 80% consists of parts and components of the A300 passenger airbus. Most of all, the aircraft fuselage was modified, which led to the appearance of the whale name for the aircraft. At the same time, the tail unit of the aircraft became higher, and additional washers appeared on the stabilizer, which were designed to improve the directional stability of the machine.

The plane is lifted into the sky by two GE CF6-80C2A8 turbojet engines from General Electric. They are significantly weaker than the P&W PW4000 engines used in the original Airbus A300 passenger aircraft. However, the power of the existing two engines is quite enough to lift a rather large aircraft into the air. Especially considering that in the vast majority of cases it transports oversized, but not very heavy loads. 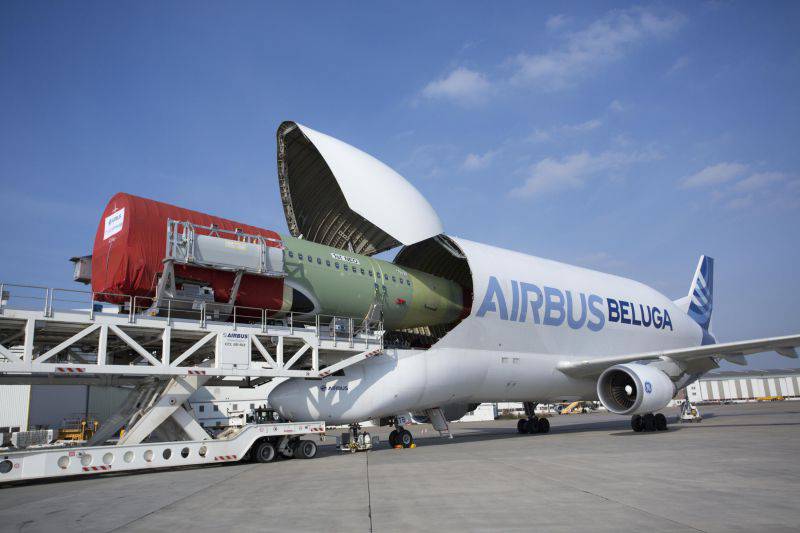 The cockpit of a transport aircraft is completely identical to that on the A300-600 aircraft. The bow section was equipped with everything that may be required for comfortable work of the crew during the flight and during the stay on the ground. In particular, there are two chairs for accompanying cargo, sleeping cabin, toilet and even a small kitchen. When the aircraft is fully loaded, which is 47 tons, the machine can travel 1700 kilometers by air at a speed of 750 km / h (Mach 0,7). At half load (26 tons), the maximum range increases to 4600 kilometers.

The Airbus A300-600ST Beluga aircraft were built in very limited editions. A total of 5 such aircraft were assembled. However, all 5 machines are used almost exclusively for the needs of Airbus. But for the implementation of special transport operations, customers can rent this transport aircraft from the subsidiary of the concern - Airbus Transport Internationa. The services of this "daughter" Airbus has repeatedly used the German military. Currently, the European aircraft manufacturer carries out a set of research aimed at creating a new transport model of this type of aircraft. This time based on the new Airbus A340 airliner. The new aircraft, like its predecessor Beluga, will be used to transport components of liners under construction. 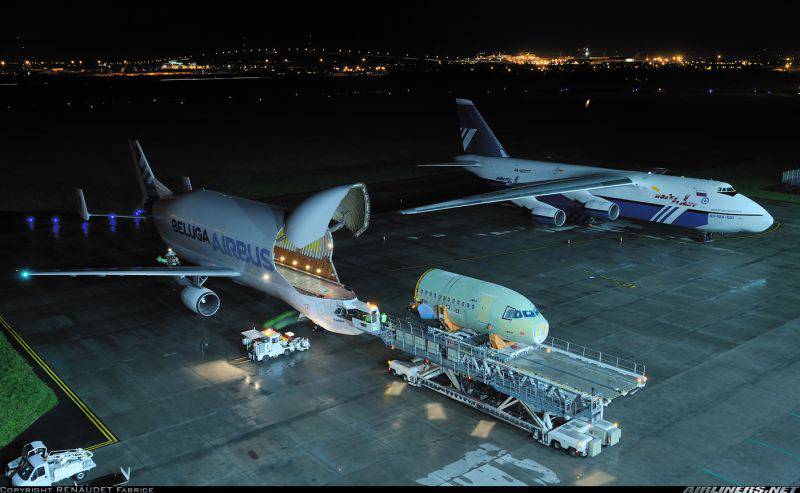