"" Polite people "and VKS pilots in the Syrian sky, we are obliged, including Serdyukov"

November 2 2015
349
I decided to write an article that would provoke the anger of both the “kremlebotov” and the “fifth column”. I want to play the role of a “devil's advocate” for a person who is hated by both those and those - Anatoly Serdyukov. 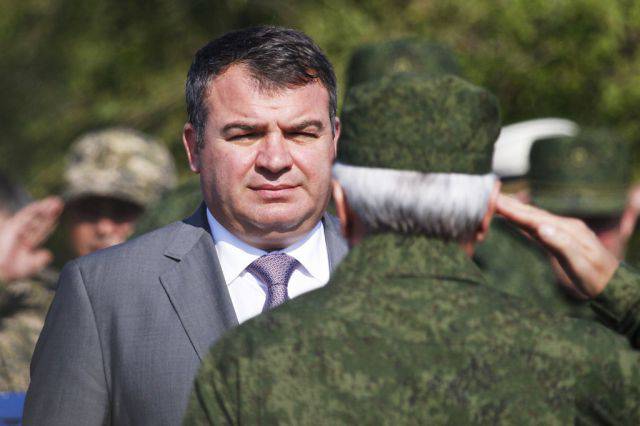 So, yesterday Serdyukov was again widely heard, as he was appointed to Rostec, which caused outrage among absolutely all political forces.

I am not (not) an exception. If you look through my FB in the years when he was a minister, then you will immediately see that I have repeatedly published over critical articles about him.

But let's analyze his actions without unnecessary emotions. So Serdyukov became Minister of Defense in 2007. A year later, our army 08.08.08 barely managed to win the war against Georgia. If it were not for the heroism of the peacekeepers and militias in Tskhinval, if not for the operational and coordinated actions of the Pskov paratrooper and the Chechen battalion "Vostok", then the Georgians could have reached the Roki tunnel and won their operation "Clean Field".

In that war, an obese 58 Army commander was wounded, as he rushed to Tskhinval on the Volga almost without cover and was ambushed, in which several of our guys posthumously became “Heroes of Russia”, covering up the journalists who were to cover the victorious entry of the general to the capital of South Ossetia.

In the war, Russia also lost including the Tu-22MR, as the commander-in-chief of the Air Force, who, according to sources, commanded the war on an ordinary cell phone, sent the plane intended for bombardment from high altitudes to reconnaissance at low altitudes.

This was our army in 2008 when Serdyukov arrived. He left in November 2012-th, and in February 2014-th, that is, after just 15 months, the world appeared "Polite People" and the Russian army, which NATO recognizes more than all the European armies combined.

Either we now believe that “Serdyukov ruined the army”, and Shoigu, in a little over a year, brought it to an unprecedented level of training and combat capability, or we realize that such processes are not done so quickly, and, therefore, “Polite people” and fashionable pilots VKS in the Syrian sky, we are obliged, including Serdyukovskim reforms.

Already after Serdyukov’s resignation, he read an article (unfortunately, I cannot find it now) that he did the impossible with the Defense Ministry - he cleaned the department from the generals, who were used to the fact that the soldiers were free labor for the construction of summer cottages. He spent huge federal money on actual bribes to transfer the sons of the generals, who did not know anything about the art of war, to other non-military posts, in order to leave real professionals in the Ministry of Defense.

He demanded that the military-industrial complex justify its prices, and produce new types of weapons, while the generals, accustomed to kickbacks and the “hand washes” scheme, did not want to change with the era.

In this regard, the generals and the military-industrial complex, whose usual muddy charter Serdyukov destroyed, hated him, and constantly shared this with the press.

There were a lot of mistakes in his reforms - for example, the abandonment of the Cadets at the Victory Parades, and of course the poet Vasilieva.

But in general, Serdyukov received those still Augean stables, clearing them up, and having pretty much smeared shit, he became a whipping boy, giving way to the real hero and public favorite Shoigu.

But everyone who understands the slowness and slowness of such a colossus as the Russian Army cannot but understand that without Serdyuk reforms there would be no “Polite People”, the Crimea, Syria, etc.

Putin understands this, and, apparently, for those services to Russia (about which textbooks will never be written stories) and allows the former minister to now get a normal position in the state corporation.

But if you think and analyze. And if you just do at least a pro-Kremlin, even a pro-liberal populism, then, naturally, you have to shout, be indignant and indignant.