Country 404. Save the blockers from the wrath of the Crimeans!

November 4 2015
37
Well, the blockade of the Crimea continues? To complete, with speeches, with a scream about hunger, about the death of children. Crimeans "at the last line." Jamilev and Chubarov have not been addressed to anyone. Where not only expressed. And these damned farmers are all taking and bringing their beet to the Crimea. Almost under water dragged. Zradnik on zradnik sits and zradnik chases. 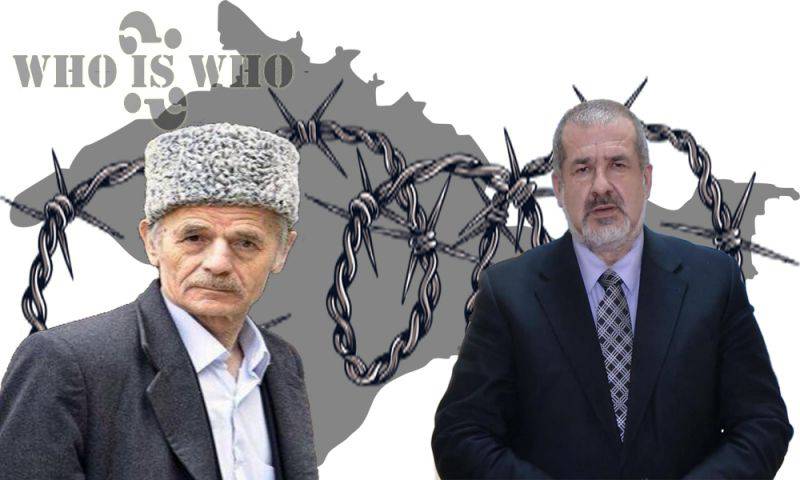 Talked a lot. And about the fact that, according to Ukrainian laws, the Crimea still remains a free economic zone for this country. And the state, apart from words, does absolutely nothing for this blockade itself. And the Turkish money leaders of non-Crimean Crimean Tatars work out in full. Turks with pleasure occupy empty seats in the Crimean markets and in stores.

I'm not talking about the fact that everyone, except for the Ukrainians themselves and the Tatars, has de facto already recognized the ownership of Crimea in Russia. And the inhabitants of the peninsula can fill the face for their imaginary Ukrainians.

The main blockade! And maybe dig the isthmus? No, with the isthmus will not work. There was a wall built, built, and finally ... the money ran out. We'll have to endure the hardship and deprivation at checkpoints.

Why am I doing this? Yes, I just read here on Facebook a record of one Crimean non-Crimean Tatar from the mass media. Deputy Director General of the Crimean Tatar TV channel ATR Aider Mujdabayev. Straight tears pierced. Not a record, but a groan of an oppressed and hungry people. Yes, and abandoned by their government to be devoured by the terrible prosecutor of the Crimea.

Scary not outwardly. There is no arguing against the whole world. Even the Japanese recognize her beauty. Terrible because the prosecutor. And acts as a prosecutor. Therefore, let me take liberty to quote this fighter for the rights of the Crimean Tatars.

“The Crimean Tatars and other citizens of Ukraine come from the Crimea, who are now on blockade, the Crimean Russian prosecutor’s office is facing criminal cases. however, what does this blockade have to do with the jurisdiction of Russia, but they will think out there, they will do business, it’s just ... And what will the Ukrainian state do to protect its citizens who have parents, wives, children living in Crimea? any 1001 note? This is if even on Looking for That is -. do not do anything. "

That is a paradox. If you follow the logic of this gentleman, the blockers violate the Constitution of the same Ukraine. Interfere with the exercise of freedom of movement within the country. But, at the same time, it seems to block Russia. And on the third hand, Russia has nothing to do with the Crimea. And from the fourth side, who should write the 1001 note and why ... Already the head spun on the number of sides. Such a polyhedron is, in fact, a roller coaster, not a text

"That is, what is happening now. In fact, the state of Ukraine coolly watches how dozens, and possibly hundreds of people, are destroying their fate. I don't want to know.
Actually, a normal person, with honor and conscience, needs to know one thing: it is cynical and mean. This is some kind of covert fuss. An abomination. This is unworthy of the Maidan. That's all I wanted to say".

Well, finally, everything. He is a cheerful man, this Ayder. As we say, with a sore head and a healthy one. Who started this blockade? And these same "who" did not know that they were violating Ukrainian laws? Or hoped that in the Crimea to them will be some kind of special relationship?

It is clear that the Kiev Crimean Tatars lost not only physical, but also spiritual connection with their people. It is clear that all these Jamilev and Chubarovs are just a tool in the political game of one of the neighboring states. It is clear that the goal of this state has been achieved for today. Markets in Crimea shifted from Ukrainian products to other suppliers.

But it is not clear why completely legitimate criminal cases against the participants in the blockade, which the prosecutor of the Crimea, Natalya Poklonskaya, had brought, so infuriated the television official. Why illegal actions should protect even if doubtful, but the state. And most importantly, according to the same gentleman, as a result of the blockade, the Crimea is about to become Ukrainian. So why worry? Immediately everything will be turned upside down or vice versa. Dzhamilev, Chubarov and this very Muzhdabayev will become national heroes, such as attackers. And the prosecutor Polonskaya will go to prison.

Or does someone grab little by little? I really do not know ...

Ctrl Enter
Noticed oshЫbku Highlight text and press. Ctrl + Enter
We are
Russia, Turkey and the "Crimean Question"Strangulation: the context, conduct and consequences of the American naval blockade of China
Military Reviewin Yandex News
Military Reviewin Google News
37 comments
Information
Dear reader, to leave comments on the publication, you must to register.