November 3 2015
58
I can imagine how tired these numerous quirks of Ukrainian politics are. And not only Kiev, but also from the opposite side. Understanding the situation from time to time came across completely absurd actions of Ukrainians. Remember how the attitude to these actions changed? In the beginning - just the inability to manage. New people, new state of the state, new relationships. Then, after a series of incomprehensible resignations and the "squeezing" of a number of charismatic militia commanders to Russia, opinions began to appear that not everything is in order in the new states. And after the actions of "Ukrainian RDG" with the murder of unwanted, the opinion turned into confidence. A series of scandals associated with "squeezing" and "planting", spitting on the laws, only aggravated the attitude to what is happening. 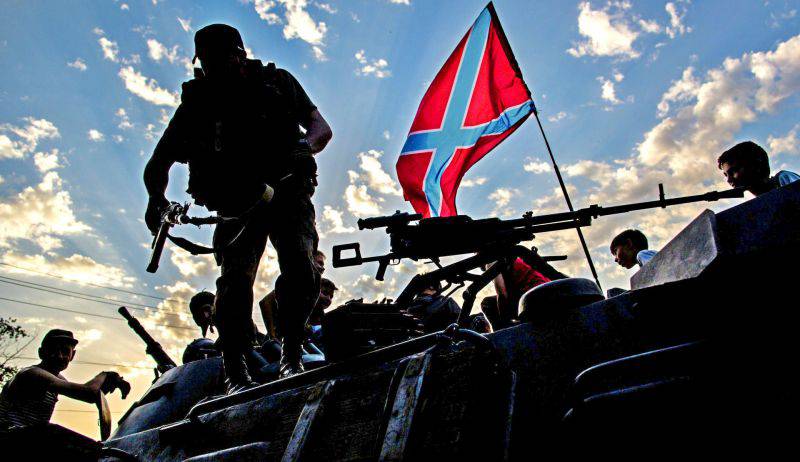 If you add scandals with humanitarian aid, the sudden arrests of Russian militias, the closure of the border, it turns out that the guys began to build something not clear. But, God is their judge. It is not our business to teach adults how to live. If people agree to live like this, then so be it. And the thin world is always better than a good fight. Especially after a long and incomprehensible war. One day without dying from bullets or mines costs much more than all our conversations.

But we continue this topic, even with all the fact that it is no longer as interesting as a year ago. Despite some disappointment, the lack of triumphant reports in combat reports and the like. Yes, now, of course, Syria is in the first place. But from this problems LDNR become less tangible or disappeared altogether? Yes, Syria, it is not far. And ISIS there is ready to ruff our nerves. And what is Ukraine next? And there are no those who are glad of any trouble in Russia?

I look at the materials of correspondents from the Donbass. What war? Holidays, peaceful life, children at school. The complete victory of the people over the Kiev junta. Even on our absolutely pro-separatist resource, judging by the number of views and comments, such sweetness causes more irritation than interest.

Meanwhile, the struggle is not for life, but for death. There is a fight for power. For control of financial and other flows. Coal is supplied to Ukraine. Companies, even with difficulty, but work. This means that there is an economic interest in power. I think that what we saw in early September is just the beginning. The next step is much more "heavy" figures. But we will talk about this in separate articles. Too many controversial materials.

I am very good at science. And in particular, to geography. And I understand that much of what science says is axioms. You want to, whatever happens, and Ukraine, or the fact that it will eventually be created there, will remain a frontier territory for us. And the problems will remain. Just because of geography.

Axiom? In my opinion, quite to myself.

So, the last statement of the head of the DPR Alexander Zakharchenko. In an interview with RIA "News“Zakharchenko expressed in the vein that everything, Kiev and Washington, as the main headquarters of the war, were“ blown away. ”There will be no more military operations, no more shelling. Peace!

"In the West, there is a consensus on the Minsk agreements: not only Europe, but also the United States insist on their implementation." Naivety? No, a peculiar understanding of recent US actions. Or the knowledge of what we do not know. We do not know yet.

What is the basis for such a bold statement of the DPR? I liked the motivation. Obama rejected the Congress-approved law on the allocation of military aid to Ukraine for 300 million dollars. So I want to write - peremoga. How can you make war without this money?

Only here the respected leader of the DPR forgot that in Ukraine, and in his republic including, weapons and ammunition are enough to wage such a war, as it was, for several decades. Just dozens. American cars of course more modern Soviet, but look around. GAZ-69 old goats are worn along the contact line just as good as the Humvee.

And about 300 $ million, what are these pennies for a country with a budget of $ 612 billion? And who forbids to render assistance through any funds, programs for the construction of new aircraft, etc.? No argument at all. Obama understands that his term is running out. He will not be the next president. So he tries to somehow “work out” the once received Nobel Peace Prize. Enter history peacemaker. Although this is more than doubtful, because "Mr. Namrothvoril" Mr. President of the United States so much ...

The reaction of the DPR to the frequent visits of military delegations to Kiev is not entirely clear. Have Americans changed? They began to take care of others at the expense of themselves? Yes fullness. How many crocodiles do not bring up, he will always remain a crocodile. For the United States has always been and remains in the priority of their own benefit. Own!

What to expect? It is doubtful that the Americans changed the strategic task of their foreign policy. Especially in light of the recent failures in Syria. The goal was and remains Russia. No matter how many times we tear off the vests on our own breasts, we have to admit that if they wish, the Americans can turn Ukraine into Somalia within a month or two. And no one, including the EU countries and even the UN, can prevent this. Too controlled policy of most countries. And the dollar, as a world currency, a huge lever of pressure.

Plus, a huge number of outspoken Nazis and fascists, who no longer see themselves with any other role than the "fighters against Russia."

Once we wrote that Americans would wage a war "until the last Ukrainians". Then it went out of the press. We once again took the position of an ostrich. Like the one that once we inspired by the Great Patriotic. Not the German people to blame, but the fascists. The people are good. In Ukraine, too, now the people are not to blame. Junta. Well yes. Poroshenko personally shot from mortars and in the volunteer battalions cloned.

There will be no peace in Ukraine. And to believe that everything goes to him - outright nonsense. If not to say betrayal. Americans need to keep troops on the border with Ukraine. To the cost of equipment boundaries increased. To tension persisted. The conflict will "smolder" further.

I can not say that we in Russia do not understand this. We understand. And we have the appropriate actions. For example, the re-registration of Ukrainian citizens in Russia. Figures from unverified sources, therefore we apologize if there is an inaccuracy somewhere. In Russia, now about 2,5 million citizens of Ukraine. Of these, only 1 million from Donetsk. And the rest? And all of them until today enjoyed preferential visa, more precisely, visa-free regime. Lived in Russia, as in their own country.

At the same time, only about 300 thousands of people received work permit. But the cost of maintaining them for Russia has exceeded 30 billion rubles. To afford such spending, we can not. Last month benefits, and then all on a common basis. In addition to the residents of Donbass, of course. A sufficiently effective measure for the education of love or hatred of Russia.

I managed to talk with representatives of the Ukrainian people in the Voronezh region. We have them, you know, not just a lot. I have a couple of those who came running from Kharkov in my house. The reaction is panic and fear. The fear that everything is good (by Ukrainian standards) life is over. And the panic that most likely will have to go to their historic homeland. Because there is no evidence that they escaped from the bloody regime (and it wasn’t there, but then there wasn’t any inspection), and you’ll either have to live differently in Russia or live as you will in Ukraine.

And none of the prospects of the rainbow is not.

But back to the prospects. What's next? There are no grounds for considering that Kiev’s refusal of a military solution to the conflict is real. The peaceful entry of LDNR into Ukraine on any conditions threatens the death of Ukraine itself. And, more importantly, the real death of its current leaders. Any union will spawn a partisan movement. I emphasize any!

Will the Americans come in any form to Ukraine? Will an American military base be created? I think no. Too dangerous. Military assistance will be in the form of instructors and advisers. But in perspective, the entry of European peacekeepers is quite possible. Europe will not be able to refuse the older brother. By virtue of its military weakness and economic dependence. And in this case, we will be forced to introduce peacekeepers to the east of Ukraine. So, the goal of the Americans will be partially achieved.

The Minsk agreements reached the main point. At the very least, but the war was stopped. But further actions need to be coordinated again. It is necessary to solve issues of state-building in the territory of the former Ukraine. And, no matter how sad it is to admit it, we could not maintain the unity of this state. Ukrainians will become the next Yugoslavia. More precisely, the fact that from her left. The second largest European state, which could become the leader of Europe, has been destroyed. Divide and rule...

Ctrl Enter
Noticed oshЫbku Highlight text and press. Ctrl + Enter
We are
Results of the week. “I am tired of these faces. There are many people, but no people. ”Results of the week. "God forbid to see Russian revolt, senseless and merciless!"
Military Reviewin Yandex News
Military Reviewin Google News
58 comments
Information
Dear reader, to leave comments on the publication, you must sign in.