November 1 2015
168
31 October 2015, a terrible plane crash occurred. Among the passengers were children. The only people on this planet who are truly unable to lie. They are bypassed by politics; mercantile interests and complexes of unrealized ambitions are alien to them. Children age, in my opinion, is sometimes needed by adults more than by the children themselves. It is necessary to remind of something pure, so that at least once a regular man in the street shook off prejudices and for a moment got out of the material swamp.


It is the attitude towards children (and elderly people) that speaks of the moral level, spiritual health, and even capacity, both of the whole society and its separate group. Even in places not so remote, "child-killers" are a class of untouchable outcasts. For the last mention of the humane nature of man at his best age is sacred. This is the foundation, the foundation of society. And it is worth this society itself to forget about it, as its suicidal component absorbs the whole. The rapid degradation invites into the already burning house all the minor sins - greed, envy, vanity and other guests.

No, I will not conduct a psychological or social analysis. This is not required. After all, there is practically no difference between the svinichim delight of the Maidan screamers at the burning House of Trade Unions in Odessa and the poor orgasm of the network trolls over the wreckage of an airliner on the Sinai Peninsula. Just the dead children's bodies became for them a tiny hindrance, an uncomfortable piece, which was successfully overcome. This is not the Rubicon and the bottom that was not broken again - this is the end of the road, the finish.

And therefore it is worth presenting only a small part of our finalists. So to say, a small digest in which the finalists present themselves. Let's start with our "nebratev", so to speak burnt "Europeans". 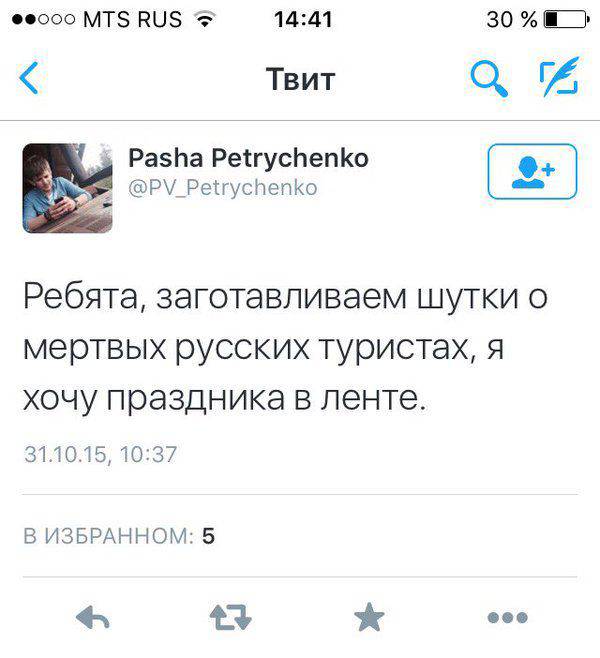 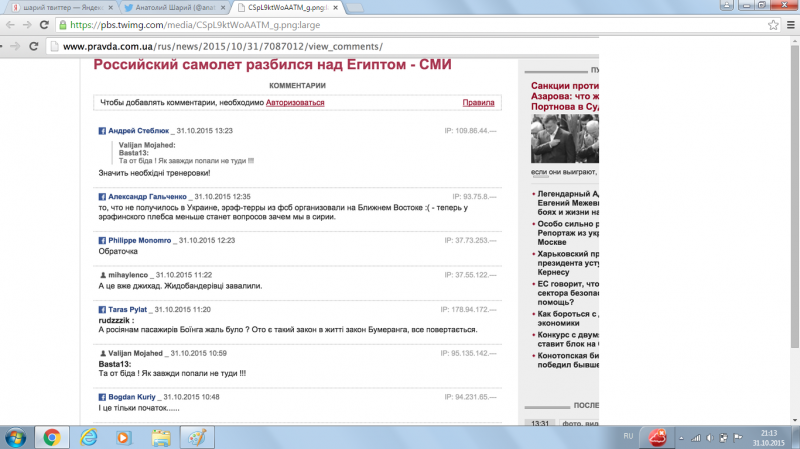 Professional cadres of the opposition media also once again proved their “professionalism”. 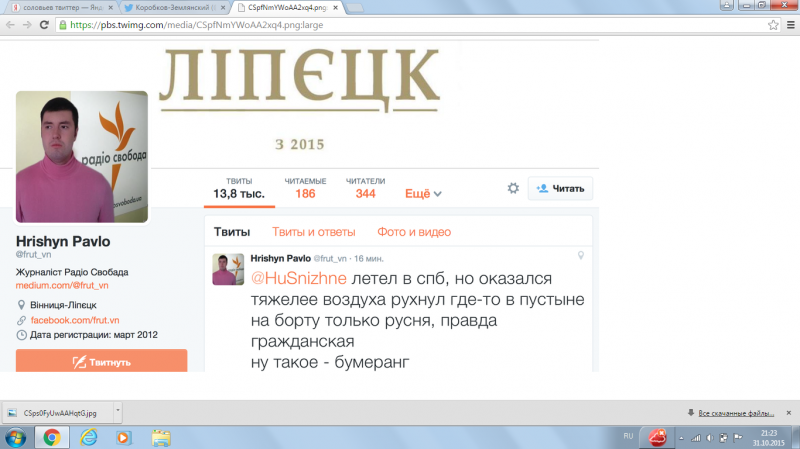 Well, that to us on "abroad" to go. Let's return to our sheep, as they say. And then the next “star” of the opposition Elshad Babayev clumsily proclaimed. Despite the fact that Elshad did not learn to write without a mat, and was treacherously pulled by the ears from the Ministry of Internal Affairs of the second financial spring, he flashed "timely" humor. True, he forgot to mention that his reference to Mikhail Zadornov concerns the latter’s brutal satire on media inclination to sensationalism by any means, written many years ago. But these subtleties do not fit in the mind of Elshad. 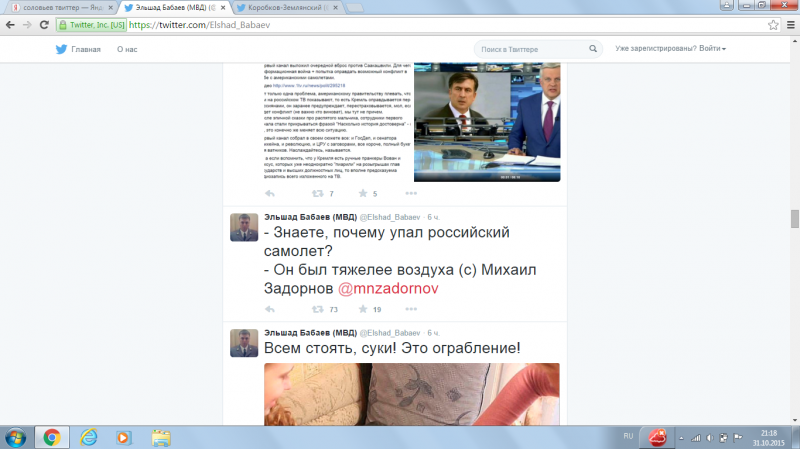 Mr. Gudkov did not stand aside either. Trying to pump up his rotten political career, Gennady Vladimirovich began to burn with a verb. Well, until the body is cold. 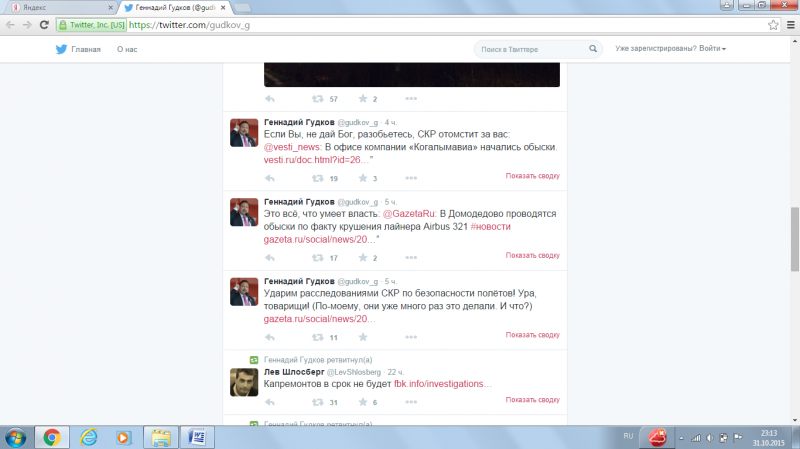 The queen of all drunk parties of the capital Ksenia Sobchak didn’t change herself either. She, to admit, surprised me a lot with her mental abilities, which I thought was somewhere between a guinea pig and a sterilized rabbit. This time, Ksenia Anatolyevna very far-sightedly retweeted the condolences of Svyatoslav Vakarchuk (the leader of the Okean Elzy group), who had recently worked as a guslar on the Maidan, but remained able to manifest simple human feelings. Sobchak, thus, added himself to the condolences, and at the same time showed "the true face of the Maidan." But the trouble is, the young lady underestimated both her readers and the “face of Maidan” itself. In general, it was clumsy. 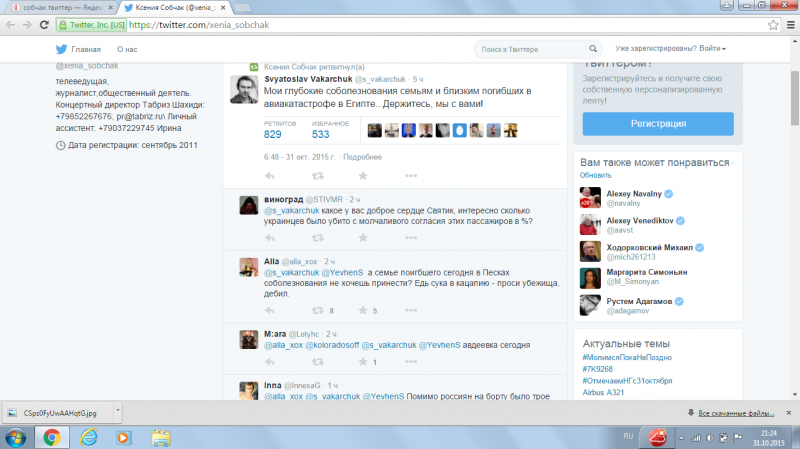 What was that? Political urges? Or moral degradation? Does it matter? In my opinion, no. Only, what to do to society is a question. And infantile answers in the style of "plant" will not help. More precisely, they are impractical, and inhumane. For me to become a mirror reflection of these individuals is death, spiritual emptiness, a vacuum. Perhaps the only way to fight is a social boycott. Full rejection, as the living rejects the dead. No communication, no shopping, no business contacts, no outstretched hands. Who knows? After all, I do not believe in hopelessness.