October 31 2015
72
It has been exactly one month since the start of the air operation in Syria. The head of the Main Operations Directorate of the General Staff of the RF Armed Forces, Andrei Kartapolov, spoke about its results on Friday. His speech at the briefing quoted by the press office Ministry of Defense of the Russian Federation. 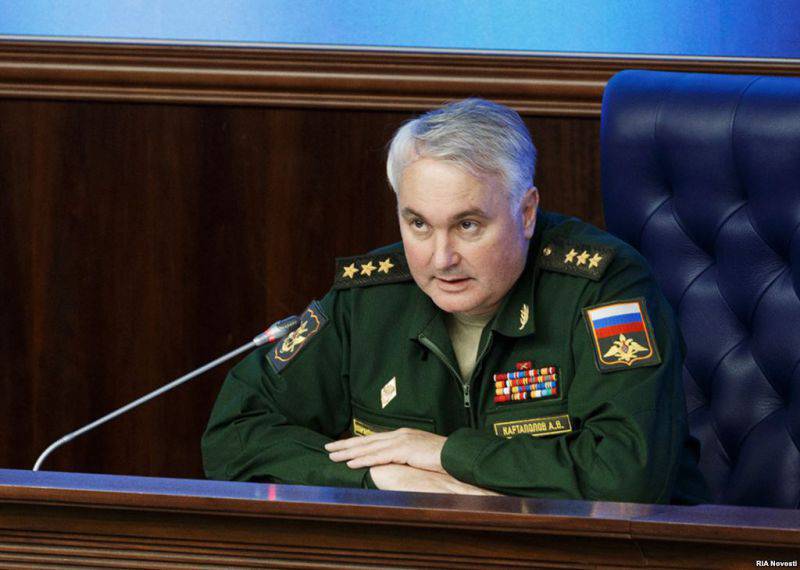 “A month has passed since the beginning of the actions of the Russian air group in the Syrian Arab Republic. Today, some results of the combat work of the Russian Aerospace Forces are summed up

In just a month, Russian aircraft carried out a 1391 combat mission, destroying the 1623 object of the terrorists. These include:

As a result of the strikes of the Russian aviation, the situation in Syria has undergone significant changes. Terrorists suffered significant losses. The control and supply system of bandit groups that has been created over the past few years has been violated. The main control points and communication centers were disabled. Destroyed most major militant supply bases weapons, fuel, ammunition. The infrastructure that was used to train new terrorists has been destroyed. ISIS and "Djibgat en-Nusra" lost the initiative and were forced on the whole front to go over to defensive tactics. At the same time, the stability of the gang control is broken. This was facilitated by the destruction of the most odious bandgame 28.

Only in the province of IDLIB, in the EL-GAB boundary, over the past two days, four such “leaders” were destroyed.

Terrorists are trying to replenish their gangs with new militants. The most widespread nature of this process is in the province ALEPO, where the militants are trying to transfer their reserves from the territory of Iraq and other neighboring states. However, the level of training of these reserves and their moral and psychological state is extremely low. Therefore, gangsters trapped in a number of districts encircled or under fire by Syrian government forces are trying to escape by declaring their affiliation to the so-called “moderate opposition”, and their leaders, because of their cowardice and unwillingness to fight, stop paying them.

In order to receive political support and financial assistance from abroad, the leadership of a number of gangs that were part of the Jibgat al-Nusra terrorist group decided to abandon their symbols and go under the banner of Harakat Ahrar ash-Sham, which the West refers to "moderate opposition".

In addition, in the HAMA province under the conditions of the Syrian army offensive, field commanders of the Jibgat al-Nusra gangs decided to unite with ISIS.

In most areas of warfare, some previously well-trained gangs, turned, in fact, into an uncontrollable army.

To stop the flow of deserters, the gang leaders resort to unprecedented cruelty measures.

It is known that militants execute prisoners and hostages. But the last case is a public execution in the Damascus suburb of HANSHI 17 militants from the Al-Ghurab gang who tried to leave the combat zone and enter the territory of Jordan. For intimidation, the local population was driven to their execution. The whole action was filmed on video for subsequent distribution to other groups operating in the Damascus area and other regions.

The air strikes of the Russian aviation allowed the Syrian armed formations to go on the offensive in the provinces of ALLEPO, LATAKIA, IDLIB, HOMS, DAMASK and to clear large areas of bandits.

In three weeks of active hostilities, the Syrian army liberated more than 50 large population centers, about 350 square kilometers. Local residents have already begun to return to a number of settlements.

Thus, in the area of ​​ALEPO, the Syrian army liberated 19 settlements. Government forces repulsed all the militant counterattacks and continue the attack on QUIREZ in order to fully release it.

In the province of LATAKIA, militants are driven out of 9 settlements. On flat terrain assault troops are fierce battles for the capture of the city SALMIA.

In the central part of the country, as a result of active actions, the Syrian army liberated 12 cities in the province of HAMA. The armed forces are developing an offensive to the north.

In the province of HOMS, as a result of an offensive by government troops and national militia units, it was possible to take control of the city of SNEYCEL and completely block large gangs in a number of localities, such as DAR EL KABIRA, CEM ALI, TEYR MAAL. Now being prepared for their destruction.

In the DAMASKA area, heavy fighting continues in the Eastern Guta quarter.

There is considerable success in the DUMA and NULA area.

In the direction of JAUBAR, government forces continue to conduct offensive operations in order to encircle the militant groups concentrated in the area.

Despite significant losses, gangs in a number of areas continue to hold positions, which over several years have been turned into real fortified defense areas with an extensive network of underground tunnels and various structures.

Given that the fighting is conducted mainly around settlements, the Syrian troops minimized the use of aircraft and artillery, thus trying to preserve the infrastructure of their cities for the return of residents and to prevent civilian casualties.

However, talking about a complete victory over the terrorists in Syria is premature. Despite significant losses and massive desertion, in a number of areas the militants continue to resist government forces. In this case, all attempts to counterattack them by the Syrian armed forces are stopped by causing great losses to gangs.

After a month, it is extremely difficult to understand the essence of the claims and actions of the so-called “moderate opposition” in Syria.

In the face of the threat of the seizure of the country by international terrorist forces, all patriotic forces must unite and come out in a united front against the common enemy. But, unfortunately, this has not happened yet.

The Russian military department has repeatedly declared its readiness to cooperate with all Syrian formations fighting against the ISIL and Dzhibgat al-Nusra terrorists. This also applies to the Syrian Free Army.

The Russian Defense Ministry is ready to interact with the patriotic opposition in any format, including within the framework of the Joint Information Center in Baghdad. It is guaranteed that all information received from the Syrian Free Army and other moderate formations about the ISIL and Dzhibgat al-Nusra objects will be studied, and the objects themselves will become priority for defeats by Russian aircraft.

In order to prevent possible incidents with coalition planes in the airspace over Syria, cooperation with the American side has been established in strict accordance with the signed memorandum. Twice a day, and in case of urgent need and more often, according to the scheme established by this document, direct contact is made on issues of discussing security issues.

Despite the fact that the General Headquarters informs the public as quickly and fully as possible about the actions of Russian aviation in the Syrian Arab Republic, new fakes appear in the Western media almost daily with accusations of indiscriminate strikes - to the extent that the number of hospitals and mosques destroyed by Russian air strikes , houses and cultural monuments exceed the number of strikes inflicted by Russian aviation on terrorists as a whole.

At the same time, any reliable evidence or facts confirming these so-called "stuffing" is traditionally absent. As a "proof" presented next photo collages or video frames of some ruins without reference to the place and time of this event.

Today, the Russian Ministry of Defense shows the real picture, using data from objective monitoring. The following is an aerial photograph of the mosque mentioned, taken on October 29 2015 g. The photo clearly shows that the mosque has no damage. 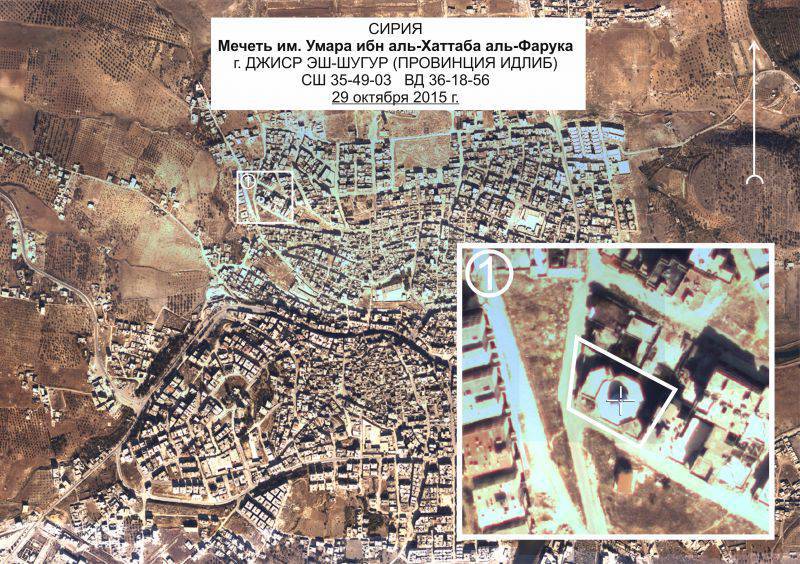 Therefore, all the so-called revelations, published by a number of quite reputable Western publications, are nothing more than an ordinary fake, with no factual basis.

Once again we appeal to our Western partners who are trying to blame the Russian Defense Ministry for indiscriminate strikes. The Russian military department knows how many spacecraft and reconnaissance aircraft at each time point monitors the actions of the Russian Air Force in Syria. Therefore, if the military departments of the NATO countries and other countries wish to bring any charges, they have every opportunity to present concrete facts and documents, as the Ministry of Defense of the Russian Federation does. ”