How much does the Syrian operation cost Russia?

November 1 2015
65
Andrei Illarionov, a former assistant to the president of the Russian Federation, now a senior fellow at the Center for Global Freedom and Prosperity of the Cato Institute (USA), in a very interesting interview with Radio Liberty, estimated Russian spending on the Syrian military operation at 377 billions of dollars. 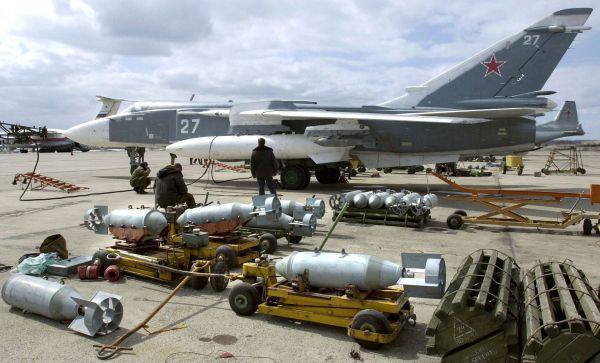 The interview itself can hardly be called pro- or anti-Russian - Illarionov remembers well that many of the current strategies that the Russian Federation is implementing were developed with his participation. He tries to be as objective as possible, to the best of the restrictions that work in the American institute imposes on him ... Do not be mistaken about the freedom of speech in such institutions, there is no way out of political correctness!

Regarding expenses, one can say this: the point of view of an expert, whose authority we have no doubt, is somewhat generalized. He takes into account in the costs of the Syrian operation the whole complex of training and re-equipment of the Armed Forces of the Russian Federation for four years:

“At least in terms of 4 of the year, starting in January of 2012, when the campaign for the massive rearmament of the Russian armed forces and preparations for this war began, the costs can be estimated at about 377 billions of dollars. This is a figure for the 4 of the year, given that the trends that have been observed before will continue until the end of the 2015 of the year.

Of course, when the remaining two and a half months pass, we will have new data, we will correct this figure in one direction or another. But this gives us an idea of ​​the scale of spending, the scale of the price that our country, our state, our society pays for waging this great war. ”

Of course, correct. After all, talk of how the Russian army has been rearming for four years for the Syrian operation cannot cause anything but sarcasm to an attentive reader. "Well yes! Back in 1971, the insidious Russian army built the Tartus naval base, thus starting preparations for the Syrian operation! ”, I would like to exclaim in response, offering all the expenses for the entire period to dump the esteemed expert in the same pile.

After all, otherwise the US military voiced by the US military for American military operations in the Middle East will not be exceeded by Russians. They can’t even compare with NATO’s European expenses in this direction. And after all, it is for this purpose that such fantastic assumptions of the “Russian expert” serve, in order to calm the taxpayer and force him to fork out for a new toy for the military, which corporations will be happy to make.

It becomes clear that in these same motives it is worth looking for talk about the “big war”. We allow ourselves to disagree: this operation is carried out quite locally and by a limited set of military instruments - by assault and front-line bomber forces aviation and helicopters to support the operations of the Syrian army immediately before the offensive.

In general, it is not necessary to rely on the fact that the given figure reflects somehow the reality. Well, let's calculate it ourselves, and in order not to accidentally reveal a military secret, we use for this the valuation of the cost of Russian aircraft sorties, which British military experts give us.

So get ready for a minute of military math.

Analysts at the British analytical center IHS Jane's believe that the cost of one combat day in Syria is 2,4 million dollars, taking into account all the costs of logistics operations and the provision of a military base. The same analysts say about the number in 4 million dollars, but here we allow ourselves to doubt: too large tolerances for “analytical opinion” - almost twice. Most likely, it is necessary to somehow overstate the costs in order to demonstrate less efficiency in comparison with the ridiculous results of the actions of the coalition of the West on the same fronts for the same 4 of the year.

The operation has been going on for almost a month, so it has already cost 72 a million "greens". Plus preparation, shrinking, dressing, an assumption from “British scientists” - we get an official expert assessment - the costs are in the interval between 80 and 120 millions of dollars.

It is difficult to verify their data, since the Russian Defense Ministry will not disclose the cost of the aircraft departure and other details, at least for reasons of secrecy, because from these figures the intelligence officers can make unnecessary conclusions to Russia. The British proceed from the average cost of operating a combat aircraft at about 12 thousand dollars per hour, a helicopter - about 3 thousand. Taking into account the known (from the Ministry of Defense of the Russian Federation) the number of vehicles and sorties, it is possible to calculate daily costs as approximately 700 thousand dollars for flights and a little more for ammunition. The contents of the contingent, the ships and the collection of intelligence information plus logistics - about another 900 thousand dollars a day.

Cruise missiles are not taken into account in the study, but everything is much more complicated, one launch can cost a million dollars and several tens of thousands.

The Ministry of Defense of the Russian Federation and the Ministry of Finance believe that the budget will not incur additional expenses in connection with this operation, since it is comparable to large-scale exercises in a remote theater of operations. So says Finance Minister Siluanov. Concerning the expenses for the next year, there is no information yet. According to the Russian Defense Ministry, about 50 aircraft are involved in the operation.

It is noteworthy that a consistent opponent of the current government, former Finance Minister Kudrin, agrees with these calculations. He also says that the costs are quite comparable with the holding of large-scale exercises, since the bombing ammunition is mainly being carried out.

Only a missile strike from the Caspian Sea is highlighted - this launch of cruise missiles has a certain shade of the Voentorg advertising campaign, as it perfectly demonstrates the capabilities of Russian weapons. The “Caliber” missiles are sold for export with a limited range of kilometers to 300 called the “Club”. Comparing the operation with the teachings, Kudrin talks about scenarios, for example, for the Far East theater, where everything is quite comparable in scale.

It is also noteworthy that the oppositionist considers this operation justified from the point of view of the danger posed by the IG and the reputational component. True, Kudrin introduces a small amendment (the provision obliges!), Saying: "I think that Russia should take part in the antiterrorist campaign of the coalition in the Middle East, the threat is too strong." Although his American inspirers clearly do not seek to see Russia in their company!

From a strategic and geopolitical point of view, the Syrian videoconferencing operation of the Russian Federation is justified - there is a redistribution of spheres of influence in the world, and it is simply necessary to move our overseas partners where they have already managed to make inconsistencies and turn the population of Arab countries against themselves. The moment is good, and the benefits of such a decision may in the long run cover the costs. The main thing is not to incur losses, because the plane costs tens of millions of dollars, and there’s nothing to say about the life of a pilot!

Ctrl Enter
Noticed oshЫbku Highlight text and press. Ctrl + Enter
We are
What you didn't want to know about EnglandRevealed the secret of provocation in the American Boston
Military Reviewin Yandex News
Military Reviewin Google News
65 comments
Information
Dear reader, to leave comments on the publication, you must sign in.