On the creation of the Russian school movement

November 2 2015
18
October 29 in Russia, a new organization of children and youth, called the Russian schoolchildren movement. The corresponding decree was signed by Russian President Vladimir Putin. It is emphasized that the new organization will be a public-state. 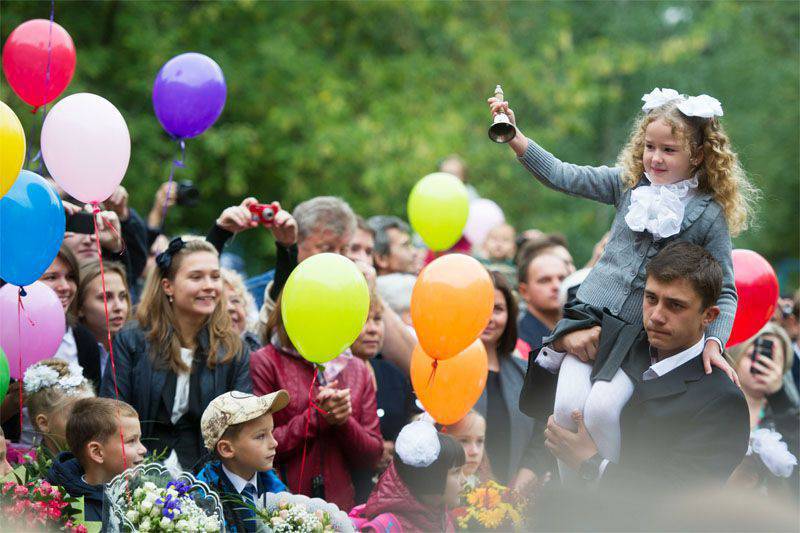 Decree No. 536 of October 29 2015 of the Year “On the creation of the All-Russian Public-State Organization Russian Movement of Schoolchildren”.

From the text of the presidential decree:

In order to improve the state policy in the field of education of the younger generation, to promote the formation of personality on the basis of the system of values ​​inherent in Russian society, I decide:

1. Consider it expedient to create, with the participation of public associations and citizens (...), the “Russian schoolchildren movement”.

The full text of presidential decree No. 536 of October 29 2015 can be found at President’s website.

As soon as Russian President Vladimir Putin signed the decree, the journalists asked the head of the Kremlin press service, Dmitry Peskov, what the conditions for the admission of children to RDSH would be, and who at the first stage would be the creators of, if one may say so, the general line of the Russian school movement. Dmitry Peskov found it difficult to answer these questions, saying only that there is a lot of work ahead for all these tasks to be completed in the near future.

And this is a comment of the creation of the Russian Schoolchildren Movement from the Minister of Education and Science of the Russian Federation, Dmitry Livanov (quoted Interfax):
The Russian Schoolchildren Movement will have an obvious positive aspect, playing a crucial role in one of the main tasks of the education system - the education and socialization of students. This is a necessary initiative, and the ministry is ready to provide all the necessary preparatory and methodological assistance in organizing such a movement in all regions of Russia.

It was noted that the “Russian School Movement” is a non-partisan organization and it is “not quite right” to associate it exclusively with the Soviet pioneering.

By and large, it is not so important whether the RDSH will be a Russian variation of the Soviet pioneer movement or not, the main thing is different. The main thing is that it is, in fact, the first children's and youth organization since the collapse of the USSR, capable of covering hundreds of thousands (if not millions) of schoolchildren, starting work in Russia. And if the work will be carried out, as stated in the presidential decree, on the basis of the value system inherent in Russian society, the positive results are unlikely to take long to wait. The main thing that is called, without the "five-year plan for two weeks" and other excesses, which in our country, the commanding person can strangle even the most good idea.

So, de jure, the Russian schoolchildren movement has been created in our country. And if, as stated in the presidential decree, it is created “with the participation of public associations and citizens”, then you can allow yourself from a civic position to reflect on what the youth organization should be protected from at least at the stage of its formation.

In addition to the above-mentioned bureaucratic hyper-initiatives, which can be directed not so much to the development of the RDSH as to self-PR, the organization will have to protect and, as they say, from another front. What are we talking about? Speaking about the fact that the very attempt to create a workable and large-scale children's and youth organization in Russia is a frank click on the nose of those structures that in recent years have only been busy so that the younger generation suddenly does not acquire a strong rod that allows everyone at the time of these, grow into a full-fledged person and citizen. This is all about the countless “human rights” and pseudo-educational structures that have grown up like mushrooms after the rain, such as the hypothetical “Parental Committee Against Teacher's Abuses”, “Sexual Education from the Diaper”, “Teenager! Know the rights, cut the responsibilities "or" The Association of psychologically injured eleventh-graders in the Russian stories».

For some time now, the educational environment itself in Russia is built in such a way that, as you see, individuality is paramount. God forbid, one of the teachers in the school will declare some kind of a spirit of collectivism, mutual aid or a comradely shoulder - this is a clear violation of the ultra-liberal principle "Think of yourself and only of yourself." A whole generation managed to grow up, with which, with young nails, it was not without the help of the so-called Soros literature that they instilled the notion “You are the crown of creation, the surrounding is shit”. Forgive generously for such a harsh expression, but in reality this is the veiled slogan of neoliberalism, which was pushed through in every way and continues to be pushed in places among young people in our country.

A whole generation has also managed to grow up, for many of whose representatives the most important task is to get two diplomas of higher education (one certainly is a lawyer, the other is, of course, an economist), and the main idea is that “everyone around me should,” for the fact that "I make people happy with my look and presence." School “must”, parents “must”, the state “must”, and “I” ... and that “I” - “I don’t owe anything to anyone - found a sucker” to work hard at the factory or work on engineering drawings ...

Who were the first to howl from such an initiative? Yes, all the same liberal "partners." Certain groups in social networks and elements of the liberal press are overwhelmed with cries for “returning the scoop”, “walking in the line”, “Juche ideas” and similar things. It is understandable. Those who, as they say, have never been seen in creation, can not afford to have from them under their nose they increase the material that is fertile for the sowing of liberal ideology - children.

In general, if the Russian schoolchildren movement is a project that is not being created for a tick, and from which the “liberal human rights activists” will drive away with forks, then there is a chance for the development of a youth organization. Will hope…

Ctrl Enter
Noticed oshЫbku Highlight text and press. Ctrl + Enter
We are
Is there a solution to the problem of patriotic education of young people? Private initiativesMilitary doctrine of the Russian Federation
Military Reviewin Yandex News
Military Reviewin Google News
18 comments
Information
Dear reader, to leave comments on the publication, you must to register.