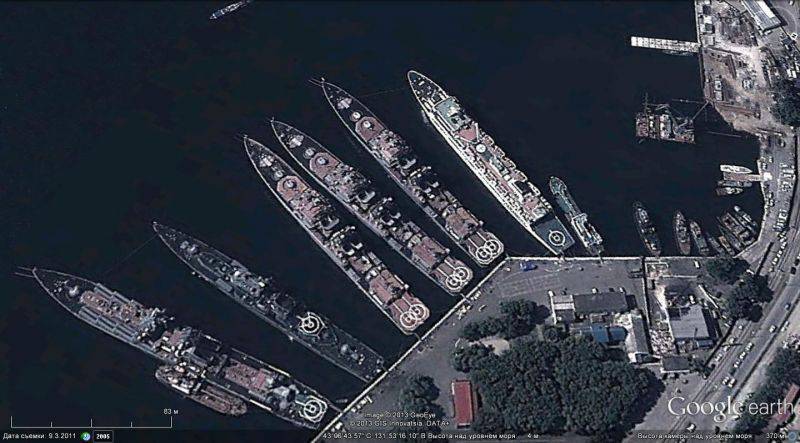 Google Earth with a frequency of several times a year updates satellite images of a significant part of the territory of Russia. In recent years, the country's leadership has been paying serious attention to improving the defense capability of the Russian armed forces, many positive changes in this area can be seen in the Google Earth images.

The guarantor of the independence and territorial integrity of the Russian Federation is the strategic nuclear deterrent force (SNF).

In the Russian armed forces there is a classic version of the “nuclear triad” - the ground (RVSN), sea (SSBN) and air (YES) components.

As of the beginning of 2015, the Russian strategic nuclear forces had about 500 strategic carriers, which deployed about 1900 nuclear warheads. 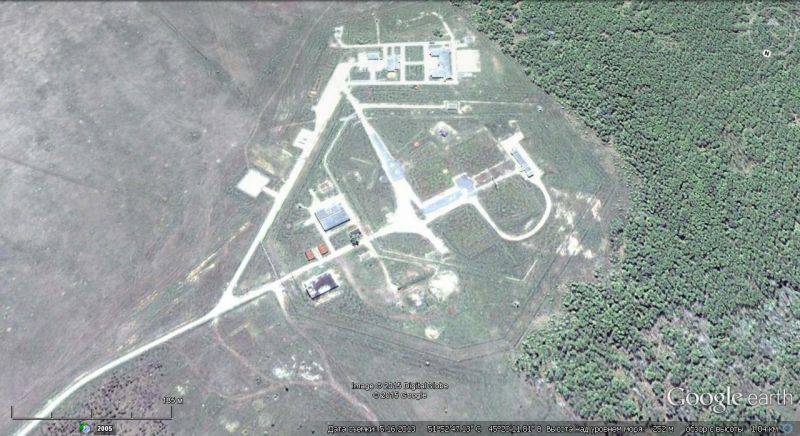 Currently, some rocket divisions of the Strategic Missile Forces, which were armed with mobile ground systems in the past, are moving to a new mobile missile system, the PC-24 Yars, which, unlike the monoblock Topol, carries three head units of individual 150 targeting -300 kt in TNT equivalent.

In addition to the warheads themselves, on the PC-24 "Yars" are installed countermeasures that guarantee the overcoming of any existing missile defense system at the moment. 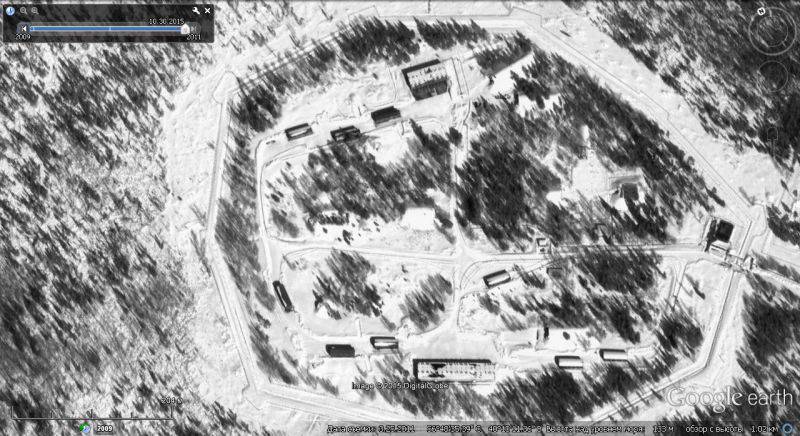 In a permanent location, the launchers are located in “Krona” type shelters, which are equipped with a retractable roof and allow you to launch rockets at any time.

The Russian Navy has 8 strategic strategic missile submarines (SSBN) with ballistic missiles on board.

Ballistic missiles that are in service with Russian submarine missile-carriers are capable of carrying about 500 nuclear warheads.

SSBN compounds are available in the North (SF) and Pacific (Pacific Fleet) navy.

On the Pacific Fleet in the Krasheninnikov Bay, 2 X-RDCS Ave. 667BDR with X-NUMX P-16P missiles are on board.

It is planned that 2 submarine missile ave Ave 955 will be part of the Pacific Fleet until the end of 2015 year.

Aviation The component of the Russian strategic nuclear forces includes 11 Tu-160 bombers and 55 Tu-95MS bombers, which are deployed at two air bases in the European part and in the east of the country. 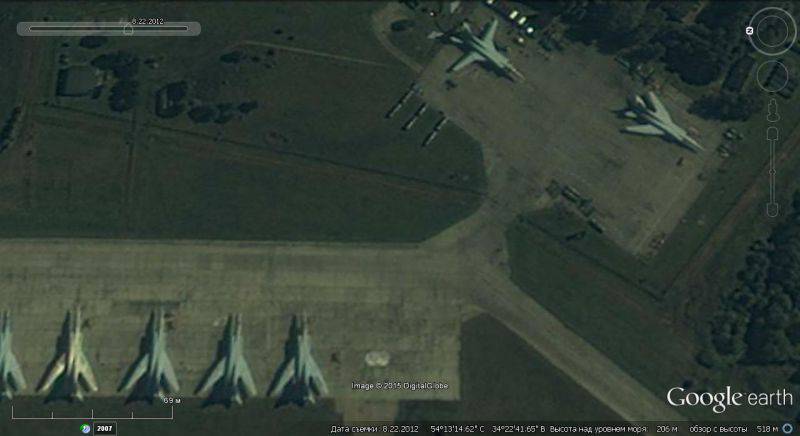 Satellite image Google Earth: Tu-22М3 at the airfield "Shaykovka" in the Kaluga region

Several years ago, the Tu-22М3 missile carriers, which were in service with naval aviation, were transferred to long-range aviation. All airplanes of this type, capable of rising into the air, were distilled from Far Eastern airfields to the European part of the country. 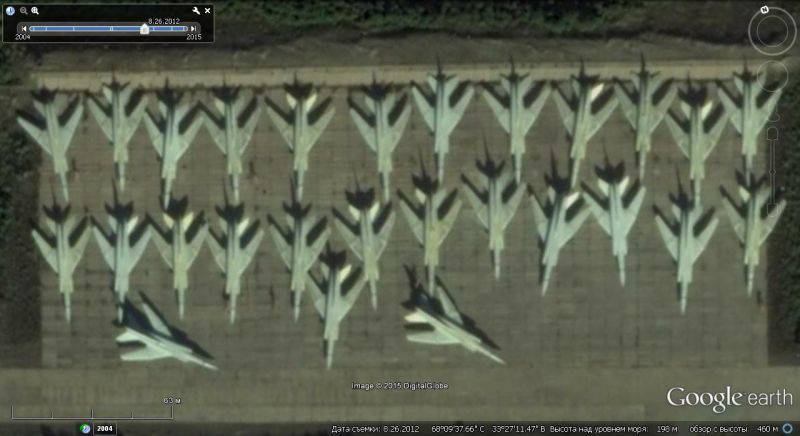 Satellite image of Google Earth: Tu-22М3, which are “in storage” at the Olenya airfield in the Murmansk region

Currently, about 100 Tu-22М3 is “in storage”, it is expected that 30 machines will be overhauled and upgraded.

The most important means of monitoring space and warning of a missile attack are stationary over-the-horizon radar, which are used as part of the missile attack warning system.

Recently, stationary radars of the old types of such designation are being replaced by new Voronezh radar - meter and decimeter ranges.

Not so long ago, the Voronezh-DM radar was commissioned in the Kaliningrad region, near the Dunaevka airfield. This radar was built to replace the old station of a similar purpose "Volga" in Belarus. 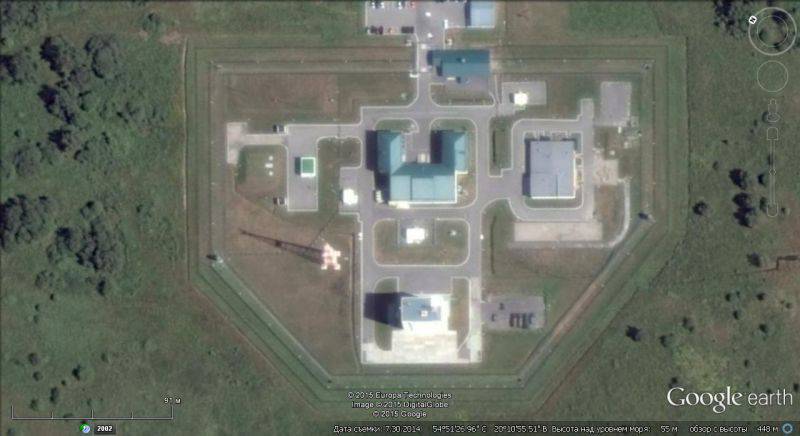 The radar station in the Kaliningrad region serves to control air and space objects flying from the western direction.

The Voronezh-M radar, built near the village of Lekhtusi in the Leningrad Region, is planned to be upgraded to a modification of the Voronezh-VP. 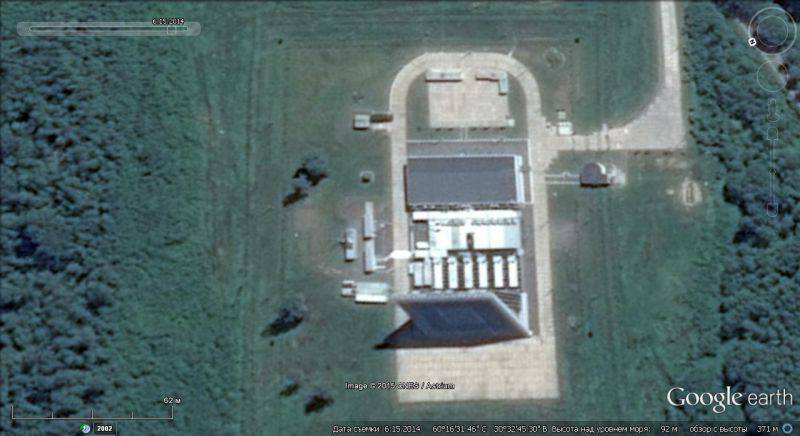 This will allow not only to control the rocket-dangerous north-west direction, but also to observe high-altitude aerial targets on the east coast of the United States.

This year, the Russian Aerospace Forces, in accordance with the state defense order, should receive more than 150 new aircraft and helicopters.

The process of developing and adopting new types of aircraft equipment is actively underway. Usually, new types of combat aircraft are tested at the M. Gromov Flight Research Institute (LII) at the Ramenskoye airfield near Moscow and at the 929 State Flight Test Center of the Ministry of Defense. Chkalov (GLITS) in Akhtubinsk.

Satellite image of Google Earth: aircraft parking at the GLITs airfield in Akhtubinsk

New types of combat aircraft entering the VKS armament are initially received for mastering the 4-th Order of Lenin. The Red Banner Center for Military Testing and Training of Military Personnel named after V.P. Chkalov in Lipetsk. Here in Lipetsk is the storage base of aviation equipment.

One of the aviation regiments, mastering the latest technology, is the 23 th IAP, stationed at the Dzyomgi airfield in Komsomolsk-on-Amur.

The 23-IAP is armed with single-seater Su-27CM and Su-35С and double fighter jets - Su-30М2. All these machines are built KnAAZ, with which the 23-th IAP shares the runway.

In 2011, work began on upgrading the A-50 DPLO aircraft to the A-50 level. At the moment, refinement passed three cars. In the course of the modernization, the electronic complex of the machine was updated, the flight range was increased, and the habitability conditions were improved. The Russian Air Force has 18 A-50 and A-50U aircraft in service.

Satellite image of Google Earth: ARLO A-50 and A-50U aircraft at the airfield in Ivanovo

In addition to the aviation component, the airborne forces of the Russian Federation also include anti-missile and air defense forces. Currently, the air defense forces are proceeding with a planned process of replacing the C-300PS anti-aircraft missile systems (ZRS), which were built in the 80s of the modern C-400 systems. 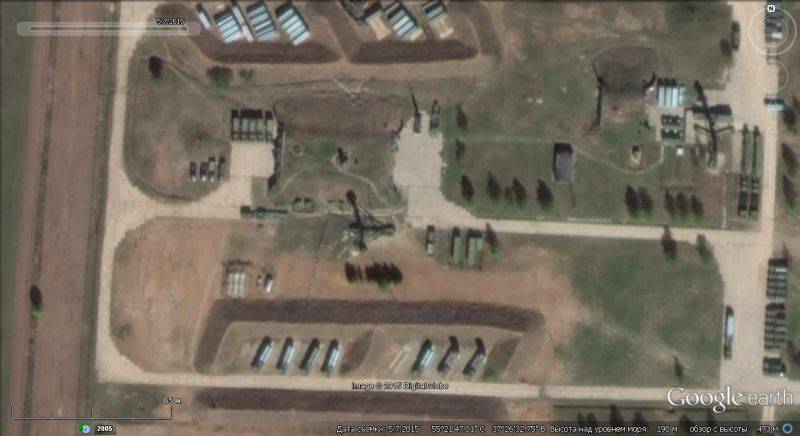 Satellite image of Google Earth: position of ZRS C-400, near the settlement of Kurilovo, Moscow region

Most of the C-300PM systems that were delivered to the air defense units in 90-s have been upgraded to the C-300PM2 level, which will make it possible to operate them for 20 years.

Satellite image of Google Earth: the position of the C-300PM ZRS at the airfield "Guards" in the Crimea

Soon after the reunification of the Crimea with Russia, an anti-aircraft missile division was deployed from another region of the country to reinforce the air defense of the Russian military group in the area.

After a long period of decline, positive changes in the navy began to occur.

After the transition of the main naval base of the Black Sea Fleet (BSF) under the jurisdiction of Russia in March 2014, it began to strengthen the combat strength of the fleet. 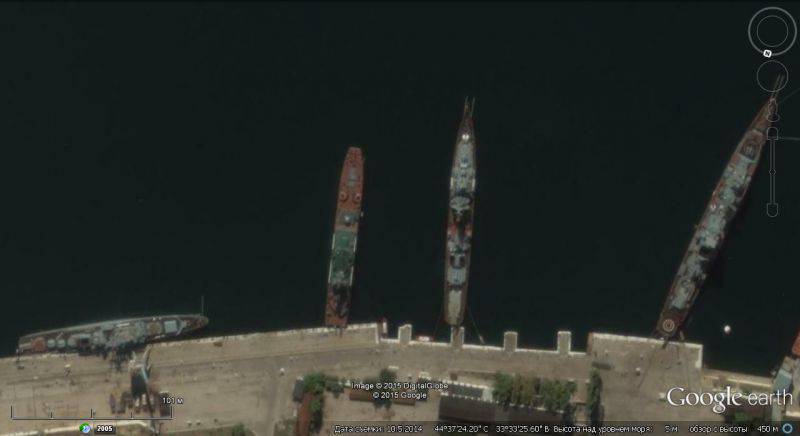 First of all, there was an increase in the BSF aviation. Multifunctional fighters Su-30CM were deployed to the military airfields of the Crimea. 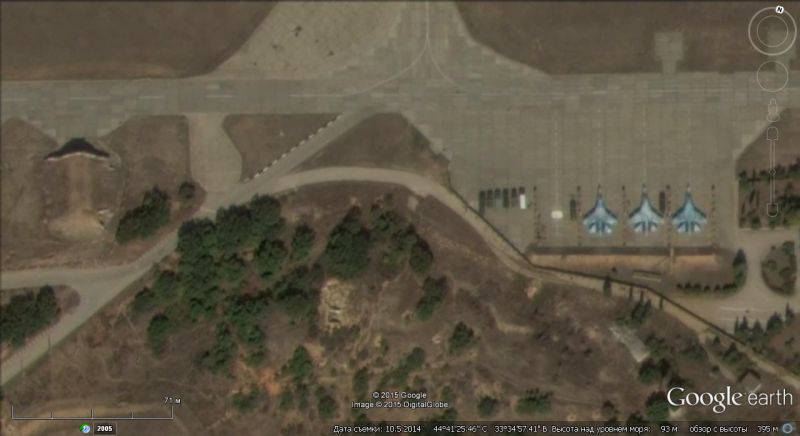 In 2015, there were reports of the relocation of several diesel submarines of the 636 avenue to the Black Sea fleet.

The only aircraft carrier in the Russian Navy's 1143.5 Ave. Admiral Kuznetsov based in the Northern Fleet (MF) from May to August 2015 was undergoing repairs in the dock of the 82 shipyard in Roslyakovo. 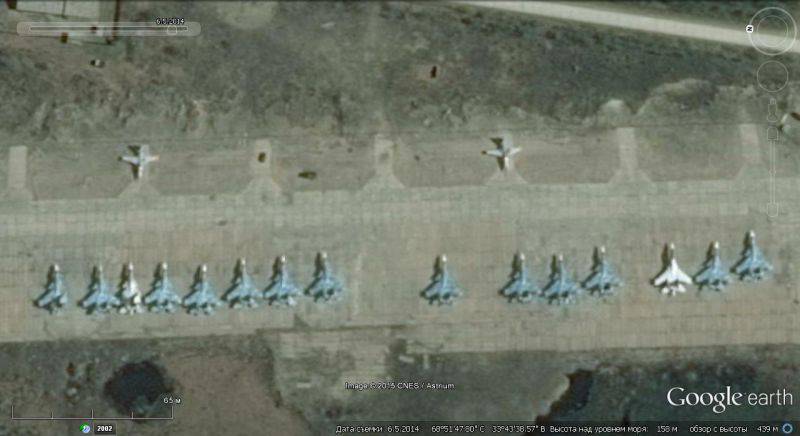 The 1144 Ave. Admiral Nakhimov nuclear missile cruiser is currently under repair at the Zvezdochka ship repair facility in Severodvinsk.

Satellite image of Google Earth: warships of the Northern Fleet parked in Severomorsk

Despite the losses suffered in the past years, the Northern Fleet is still the most numerous and combat-ready part of the Russian Navy.

Based on:
http://russianforces.org/rus/current/
Satellite images courtesy of Google Earth.