Air Kings of the Great Battle 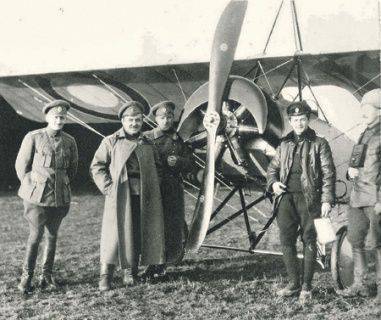 After the flight of the Wrangel army from Crimea, more than 100 Russian pilots settled in the Kingdom of Serbs, Croats and Slovenes (KSHS), which was called Yugoslavia until October 3, 1929. In 1921, the Society of Russian Air Force Officers was founded there. fleet in the Kingdom of CXC. About 30 pilots entered the Royal Air Force. Among them, at the Novi Sad airbase, Colonel Ivan Aleksandrovich Loiko served as a civilian instructor. He was only 31 years old, but behind his shoulders - more than 500 sorties.

Loyko graduated from Kachin Flight School and was released as a lieutenant. From 1 May 1915 of the year to 1 of September 1916 of the year on the Moran aircraft, Lieutenant Loiko conducted 156 aerial reconnaissance with a total duration of over 189 hours. Flew Ivan Aleksandrovich and the bombing. So, September 24 1915, he managed to achieve a direct hit 10-pound bomb in the Austrian field gun.

20 September 1916 of the year on the Romanian front of Loyko on the fighter Nyupor X for the first time shot down an enemy aircraft. And after six days he repeated his success. December 27 1916, Ivan Alexandrovich achieved a third victory, knocking down the Austrian Brandenburg C-1. Both pilots were captured by Russian soldiers. In 1917, Loiko shot down three more (counted) enemy planes, although he himself believed that he shot down 10 planes altogether.

How did the Breguet-14 bomber hit the KCS? At the end of November 1920, a French steamer arrived in Constantinople, on board of which were Bregen-20 14 bombers, which should have been delivered to Sevastopol in Wrangel's army. But, alas, the baron was already in Constantinople on the yacht "Lucull" and he was not up to the bombers. As a result, the aircraft resold in KSHS.

BACK TO THE USSR

In Novi Sad, Loyko clashed with white officers and, together with another civilian instructor Pavel Fedorovich Kachan, decided to fly over to the USSR. Curiously, both pilots were born in 1892 year and both in peasant families. Only Loiko in Belarus, and Kachan in the Taurida province. Pilots on the map paved the 650-kilometer route from the airfield in Novi Sad to the Soviet city of Kamenetz-Podolsk. 6 August 1923 at 9 in the morning, when everyone went to breakfast at the airport, Loiko and Kachan pulled Bregu 14 out of the hangar and lifted it into the air.

“The weather was cloudless, only a significantly strong head-wind from the left was blowing.

The Serbian-Romanian border, one hundred kilometers from the place of departure, passed at an altitude of 2700 meters.

Comparing the distance traveled with the time elapsed from the moment of departure, we decided that the path would certainly be traversed. The motor worked perfectly. But a solid cloudy sea opened ahead, hiding on the horizon ahead of us. We pass a little to the left near the mountain "Temishvara" (in 130 kilometers from the place of departure) and go above the clouds, since the height of the cloud layer is much lower than the Carpathian ridge, which we must cross.

Taking the height of 4000 meters, we saw that there were no gaps or openings anywhere in the clouds, through which, even though occasionally seeing the ground, we could navigate.

The cloud layer was thick and solid. Far ahead was the brightly lit huge shaft of clouds lying on the high peaks of the Carpathian Range. We did not have a compass, but we did use the clock and the sun to determine our path. Motor always works well. We are flying forward, and now ... already above the shaft of clouds lying on the Carpathians. Ahead is the same boundless and continuous cloudy sea. It was decided to fly until there was enough gas ... We go ahead ... But now the engine stops, takes it again, and it repeats itself several times, finally stops and does not take it anymore. Gasoline is over.

We started just in case, hollow planning, pull ahead. The screw soon stopped, and we quickly went down and entered the cloud layer. Cutting through it, we were at an altitude of 500 meters.

The terrain is unfamiliar, deaf and uneven: there are many sheaves on narrow fields, and in some places high thick corn grows. Only at the village itself unplowed pasture is spread. They decided to go down here and rather successfully sat down with a small rental. Immediately, a man of 30 residents came running to us. We hear, speak in Russian. At first, we were delighted, believing that we had sat down on Russian territory, but by asking the name of the village and finding it on the map, we made sure that the 50 kilometers did not reach the border and sat in Bessarabia ...

In the ravine, on the very bank of the Dniester, there was a monastery in which, according to the stories of the shepherd boy he met in the ravine, one could get bread. We go in the courtyard of the monastery and immediately meet the priest and ask for bread. ”

Well, the pop quickly "sounded", and the pilots were in a Romanian prison. The Romanians returned the Breguet 14 to the KACS and were going to do the same with both pilots who were facing the death penalty there.

According to one of the versions, Loyko wrote a letter to the Romanian Colonel Fotesko, whom he knew as a pilot during the hostilities on the Romanian front in 1917. Loyko and Kachan asked to leave them in Romania and expressed their readiness to serve in her army.

Fotesko didn’t answer them, but a Romanian intelligence officer arrived in prison. He took from both pilots a subscription on non-disclosure of secrets and readiness to work in the USSR for Great Romania. After that, Loiko and Kachana were secretly smuggled across the Dniester. There, the pilots reported to the Tiraspol branch of the OGPU. They did not intend to spy on Romania’s advantage and decided to silently recruit them.

Loyko and Kachan were told quite funny to the organs and the Soviet press history: “We have been sitting for two months already, 6 of October, we were unexpectedly informed that we were sent to Bender to be sent through the Dniester. This still could not make us happy, because we learned that Romanians kill those who want to go to Russia on the Dniester. 7 was sent to Bender in the evening; spent the night in the stinking chamber of the guardhouse. October 8 was sent to the border company, and from there October 9 in the village. Kaukany on the cordon, where the place of crossing was chosen. There turned out to be another 9 man of Russian refugees to be ferried. We decided that if we were taken to the place of crossing separately, and not in this group, then we must run ...

However, about two o'clock in the night under a strong convoy, headed by a Romanian officer, led us all to the shore. There, the officer divided us into two groups for the crossing, and our company of four people entered Russian suspicious behavior, it was obvious that the Romanian agent was, and we were afraid that he was sent with us to kill us on the Russian side, so that In this case, the Romanians could attribute the crime to the Russian sentinel. A wire was tied to the boat so that it could be brought back, as the Romanians were afraid to give their boatman. Twice we were pulled back, as the wire strongly braked and it was impossible to advance further down the middle of the river. To all the boat was full of holes and quickly filled with water, which we did not have time to cast a flight helmet, and almost sank. Only the third time, when we turned the wire into a skein and took it with us, leaving one end tied on the Romanian coast, we safely reached the Russian coast. Suspicious Russian ran into the bushes and disappeared. We described his signs later in the Tiraspol GPU. ”

I quote these memories on the article "The collapse of aviation emigre", published in the "Air fleet Bulletin" No. 3 for May 1924.

The flight was widely covered by the Soviet press, but Yugoslav newspapers initially claimed that both pilots were killed while performing a special task. Well, when Loiko and Kachan turned up in the Land of Soviets, the newspaper Zastava (Znamya) stated that the agents of the Bolsheviks had offered Loiko and Kachan to work in Moscow at the Academy of the Air Fleet. Zhukovsky.

In 1929, clouds were gathering over Ivan Loiko. His father-fist refused to join the collective farm, brother Nicholas ripped off the red flag from the village council. In addition, the OGPU recalled to his father that during the occupation the Poles appointed him as headman of the village. Brother and father were exiled 5 to Siberia. Regardless of this episode, two cadets of the school pushed the denunciation of Ivan. One way or another, but 14 August 1929, he was arrested and at the first interrogation told about recruiting them with Romanian intelligence. A week later, Kachana was also arrested.

4 November 1929 of the Year The Board of the OGPU drove both "ten years on the horns" under the 58 article n. 6 "Espionage". Loyko spent about a year in Butyrka, and then was sent to EON-45 - an expedition to Vaigach Island. There, the detainee prisoners worked with the civilian at the mine. “Zak” Loyko was repeatedly encouraged by thanks and monetary and clothing awards.

20 September 1934 of the year, that is, not having served half of the term, Loiko was released, but remained to work on the island as a mechanical engineer of the transport department of the Vaigach Mining Trust. Together with the "northern", he received over 500 rubles. per month. For comparison, in Moscow, the average salary of a worker in the middle of 1930-s was equal to 150 – 200 rubles, and the pension — 25 – 50 rubles. According to some data, Loiko died on the island in the 1936 year, according to others he died near Leningrad in the 1942 year.

Even less is known about Pavel Kachane. Apparently, he, too, was released early. It is known for certain that he died in the 1940 year when a new aircraft was tested.

In conclusion, I will give a brief summary of the nephews of Ivan Loiko, the sons of Nikolai’s exiled brother, Anatolia, Evgenia, and Arcadia. One of them became a rear admiral, the other - the director of the plant, the third - the chief engineer of the scientific research institute. A good career for peasant children in Belarus. Could there be such a pan-Polish?

Ctrl Enter
Noticed oshЫbku Highlight text and press. Ctrl + Enter
We are
From the history of the own names of the aircraft of Russia during the warFrom the history of own names of aircraft of Russia, 1885-1917 years
Military Reviewin Yandex News
Military Reviewin Google News
2 comments
Information
Dear reader, to leave comments on the publication, you must to register.