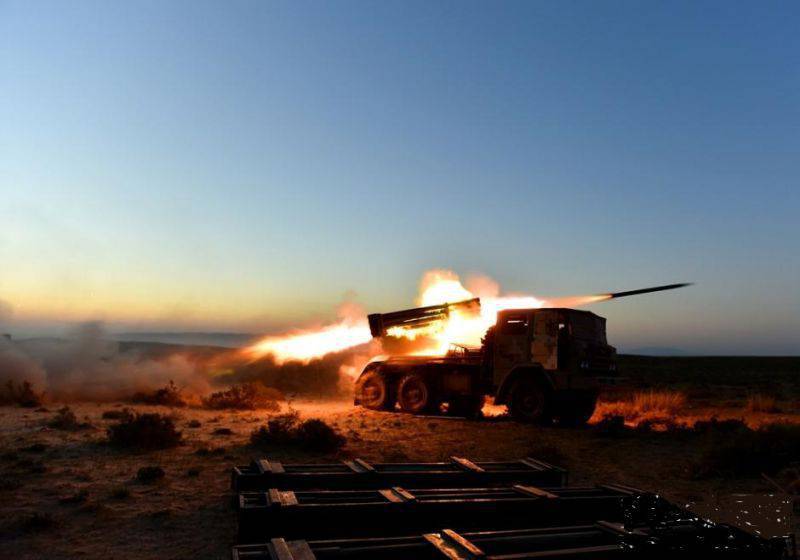 Rocket troops and artillery are the armies of the Land Forces of the People’s Liberation Army of China (PLA). They are intended to fire the enemy in all forms and forms of hostilities. This branch of the Chinese Ground Forces includes formations that are armed with tactical missile systems, multiple launch rocket launchers (MLRS) of various calibers, various artillery guns (cannons, howitzers, mortars), anti-tank guns and anti-tank missile systems, as well as artillery intelligence units.

As of the beginning of 2015, more than 13 178 units of artillery weapons systems of various types and caliber were in the missile forces and artillery of the PLA Ground Forces.

Anti-tank weapons of the missile forces and artillery of the Ground forces of the PLA are represented by the following samples:

In the course of the modernization of the missile forces and artillery of the Ground Forces of the PLA, the command sets the final task of turning them into a reconnaissance-firing system, which has the capability of long-range fire destruction of the enemy.

As a fire component of such a system, it is supposed to use promising tactical missiles of increased range and accuracy; multiple rocket launchers with the ability to automatically target and correct the flight path of missiles, as well as self-propelled howitzers of increased rate of fire and fire performance.

The anti-tank forces are supposed to be equipped with a new generation of anti-tank missile systems (ATGMs) that can reliably hit the armored defense of all modern and promising tanks enemy in conditions of limited visibility.

The reconnaissance component of reconnaissance-strike and reconnaissance-fire systems should be space systems, reconnaissance aviation, unmanned aerial vehicles (UAVs) and other means that allow, in a mode approaching real time, and with high accuracy to open objects of enemy groupings and provide target designation data, as well as carry out fire adjustments. The missile forces and artillery of the ground forces of the PLA have already begun to enter service with UAVs of various types and purposes.

The rocket troops and artillery of the Ground Forces of the PLA are composed of separate artillery, missile anti-tank brigades, as well as brigades of operational tactical missiles. Artillery formations (regiments, divisions) were included in the mechanized and tank brigades.

Here, it seems, it would be advisable to bring the tactical and technical characteristics of the most massive and sufficiently modern systems of artillery and rocket armament of the PLA Ground Forces. These include, in particular, the Type-152 83-mm self-propelled gun-howitzer, mounted on a nationally-developed unified tracked platform. In appearance and layout, it is almost identical to the Soviet self-propelled howitzer gun of the same caliber 2C3 "Acacia". The ammunition includes shots with high-explosive fragmentation, including active-reactive, concrete-breaking, armor-piercing tracer, cumulative, chemical and lighting projectiles. The Type-83 self-propelled gun howitzer has anti-bullet (anti-splinter) booking, the loading system is semi-automatic.

The most modern self-propelled howitzer cannon is 155-mm gun Type-05 (PLZ-05). It is a copy of the well-proven Russian howitzer 2C19 "Msta-S", but differs in a number of Chinese improvements.

New modifications of this type of guns have a higher rate of fire, are equipped with a more efficient automated fire control system (FCS), navigation equipment, and are equipped with means for reducing the visibility in the radar, thermal and optical ranges.

For 152-mm and 155-mm howitzers used projectile - Chinese equivalent developed in the People's Republic of China on the basis of licensed Russian corrected using laser illumination 152-mm projectile "Krasnopol". A projectile of this type can be used to suppress enemy firing points (counter-battery combat), destroy enemy tanks and other armored vehicles, as well as control points and light-weight fortifications, etc.

Chinese specialists pay special attention to the development of multiple launch rocket systems (MLRS). According to the scientific and technical level of development and technology, they have not only caught up with the leading countries - manufacturers of weapons and military equipment, but also ahead of them in many positions.

Among other things, the Chinese MLRS includes the 300-mm 10-barrel heavy reactive volley fire system Type-03 (PHL-03), unique in its combat capabilities, developed on the model of the Soviet (Russian) 12-9 "Smerch". This system includes a launcher and a transport-charging vehicle on the WS-58 heavy-duty chassis with the 2400x8 wheel formula, copied from the Soviet MAZ-8 car, as well as a fire control machine on the three-axle all-terrain car chassis, equipped with a computerized system and space equipment navigation and topography. It is intended for firing rocket-stabilized rocket propellers: anti-tank with cumulative striking elements and high-explosive fragmentation warheads.

Long-range missiles that are corrected in flight are being developed for use by multiple-launch rocket launchers in China. According to the representative of the company "Norinko", which is the developer of this system, the maximum range of destruction of its last modification brought to 150 km. On the basis of PHL-03, three more samples of multiple-launch rocket systems under the designation AR1 and AR1A were created, having respectively eight and ten tubular-type guides for 300 and 330-mm caliber missiles, respectively, which, according to Chinese sources, can hit targets located at a distance of 220 km.

... and the missile strike

The most powerful strike weapons that are in service with the missile forces and artillery of the Ground Forces of the PLA are tactical missiles. They are intended to defeat enemy groups of troops, command posts, including in-depth, ballistic missiles, anti-aircraft and missile defense systems, positions of radar stations, airfields, large warehouses, etc.

One of the most modern in the arsenal of missile troops and artillery of the Ground Forces of the PLA is the Dunfeng-11А solid-propelled mobile ballistic missile (DF-11А) on the four-axle vehicle’s high-terrain chassis. It has the NATO designation CSS-C-7 Mod2. The launch mass of the 6,35 T missile, 500 – 800 kg throw-in weight, the maximum firing range reaches 300 km, and the apparent circular deviation (CVT) is 200 m. At the same time, the combat unit of this missile can be equipped with both nuclear and high-explosive charge, this type of missile also are in service with the so-called Second Artillery - the PLA Strategic Missile Forces.

Ctrl Enter
Noticed oshЫbku Highlight text and press. Ctrl + Enter
We are
Artillery of the Korean People’s Army. Part of 3. Reactive systems85 years of the People’s Liberation Army of China. What came to?
Military Reviewin Yandex News
Military Reviewin Google News
39 comments
Information
Dear reader, to leave comments on the publication, you must to register.