Under the motto "Science and impartiality" 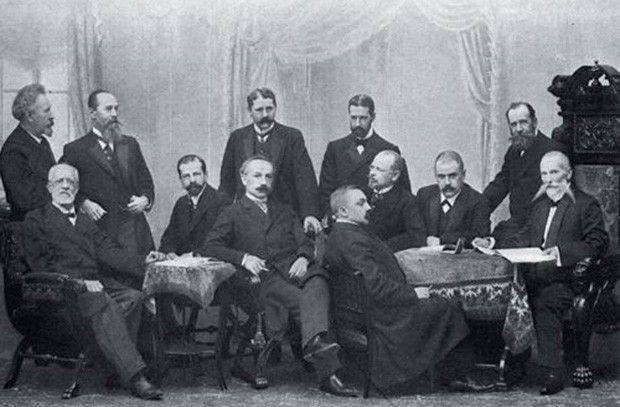 History Imperial Russian Technical Society: a half century of concern for the industrial prosperity of Russia
In the coming year, the one and a half century jubilee will mark one of the most prominent all-Russian scientific societies - the Russian Technical Society. Created in 1866, it became the fifth such society in Russia, following the economic, geographic, entomological, and animal and plant acclimatization society.

It all began with the initiative of 11 specialists in various military and civilian areas of activity, in 1864 in the year they were engaged in developing a charter for the future of the RTO. This incomplete dozen of enthusiasts seemed wrong that in the second half of the XIX century, when the whole world was going through a scientific and technical revolution, there was still no technical society in Russia, through which practical engineers could share their accumulated experience, give opinions on the most important development issues. industry, to some extent to influence government decisions, to meet with major representatives of science and consult with them. This situation they seriously intended to correct - and corrected.

The first meeting of the society, the motto of which was the words “Science and impartiality”, was held on May 24 of the year 1866. More than 160 members attended the meeting. It "publicly notified the technical community about the discovery of the actions of the new society, uniting in its ranks engineers and technicians of different profiles." At that moment, 332 was already listed in the ranks of the newly formed RTO!

The gentlemen Alekseev, Balabin, Bestuzhev-Ryumin, Kaznakov, Kornilov could not be present due to their absence in St. Petersburg.

At the request of the founders, the meeting was led by Major General Pavel Ivanovich Palubin, a railway engineer, because The election of the chairman has not yet been held.

A speech was addressed to those present by E.N. Andreev is one of the main ideologists of the creation of society and the developer of the draft of its charter.

Together with the invitation to the meeting, the participants received copies of the statute of the Russian Technical Society, which until April 22 was “awarded the Highest consideration and approval”. However, the statute came into force only after its publication in the “Assembly of laws and orders of the government” 10 of May 1866. By that time, the number of people who wished to be members of society had already exceeded 200, and then increased to 332 people. "If we take into account that in our invitations we were limited almost exclusively to the residents of St. Petersburg ... then we can not but agree that the above number is a sign of the complete success of the new society in the first step of its activities."
The goal of society: "The combination of science with practice, the promotion of the development of Russian industry and technology, the creation of domestic technical personnel."

Means for achieving it:

- “Readings, meetings and public lectures on technical subjects;
- Dissemination of theoretical and practical information through periodicals and other publications;
- Assistance in the dissemination of technical education;
- Offers to clarify technical issues that are of particular interest to Russian industry, with the appointment of awards and medals for solving them;
-Device exhibitions manufactory and factory products;
-Research of factory and factory materials, products, and especially the methods we use in our work, both according to our own invention, and upon requests from other organizations and private individuals;
- Establishment of a technical library and as required by the chemical laboratory and technical museum;
-Means between technicians and those who need their help;
- Promotion of the sale of little-known native works;
“A petition to the government about the measures taken that could have a beneficial effect on the development of the technical industry in Russia.” 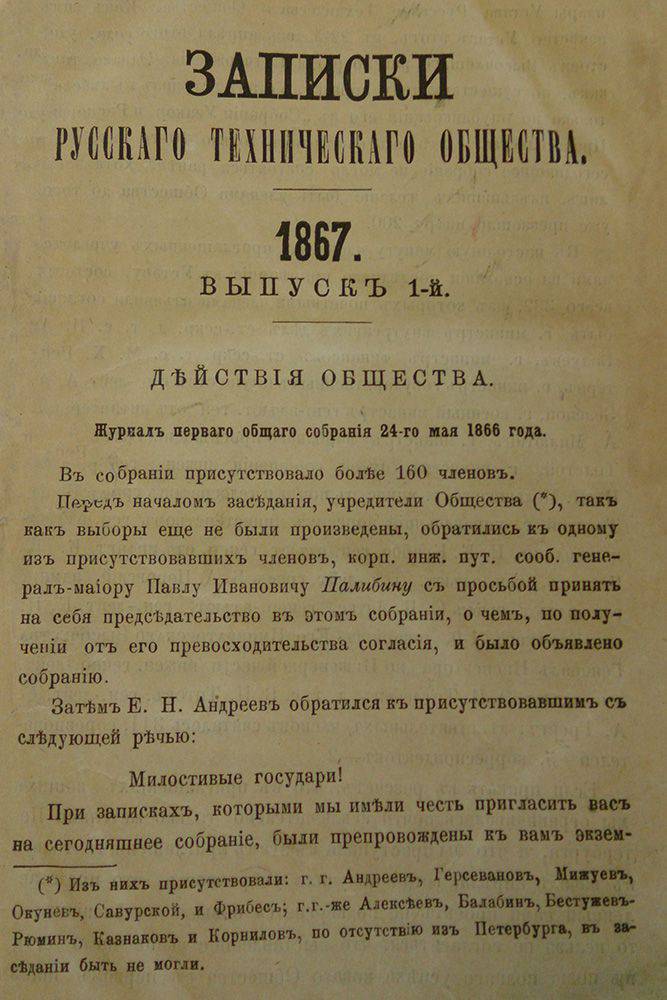 The charter of the society and departments was granted independence. The program of the company was drawn up for a year. The program was approved by the Council and ensured the departments of the RTO “within their borders complete independence”.
Drawing up the company's work program for the year ahead had a second goal: “Societies like Technical, in processing the enormous material that is provided to it, should not wait for the questions to be raised by outsiders, only by random instructions. Should not expect his meetings and his notes to be sufficiently filled if it is endowed with the passive role of the listener and the connoisseur of the works of others that have arisen without his participation. We have a lot of such work, and we can expect requests for technology even more so that the activity of society will be more lively and more practical. ”

Six months later, on November 20 of 1866, the grand opening of the Russian Technical Society took place, in which 525 members were already members.

On the day of the grand opening, his imperial highness, Prince Nikolai Maximilianovich, visited the premises of the society for the first time (Ruadze's house in Trinity Lane). At the end of the prayer, which was made by Archpriest A.M. Sokolov, he addressed the audience with the following words:

“The establishment of the Russian Technical Society fulfills an important gap in Russia's growing industrial activity. Let us recall the good of those from whom we have acquired science and guidance for technical education and technical industry, but not yet being students, not all, acting separately and without trusting ourselves, expect instructions from outside or from the concerns of the government. In the present God-blessed kingdom of Russian thought and Russian business, there is a vast scope, and Russia, rich in its vast resources, is waiting (...) for thoughts and deeds to reveal its riches and become equal with the states that were ahead of it in the field of theoretical, and practical knowledge.

We began by praying to God for the prosperity of society, and now our earnest prayer is to Him that He, the supreme ruler of the universe, bless the beginning of society’s activities and direct it to the truly useful goal, to the service of the moral and material benefits of humanity.

Allow me, gracious sovereigns, on the occasion of today's triumph, to express a feeling of sincere pleasure that our society, so desired and much needed, has finally been established and able to open up its actions. I see and know business people between you - of course, as many as I do, you know the benefits that the Technical Society should bring to our Fatherland. One can affirmatively say that it was hardly possible when a society was affirmed, of which time activity would be so absolutely necessary and would promise more success in the present and the future.

We all gathered voluntarily, guided solely by the desire to be useful, and therefore there is no doubt that each of us will do everything to achieve the goals of society: we need only wish for one, so that at first we would be able to draw the initial circle of our activities so that we can only necessary and rigorously possible, in order to experience the needs and experience our strength ”.

Secretary Andreev Society: “On April 22 of the current 1866, the Emperor was pleased to approve the draft statute of the RTO, and thus the new institution began its existence. You know that our society already had preliminary meetings, that it had already begun its modest activity. Nevertheless, it only today celebrates its discovery, and only today can be considered the real beginning of its life. ”

Thus, in Russia, the first scientific and technical society was born, took shape, and began to operate, bringing together theoretical scientists and practical engineers, which the domestic industry has long needed. It is no coincidence that immediately after the appearance of the RTO, research and development work sharply intensified, and at Russian factories, one after another, they began to embody the invention of Russian nuggets in metal and glass.