How the military prevented the third world war 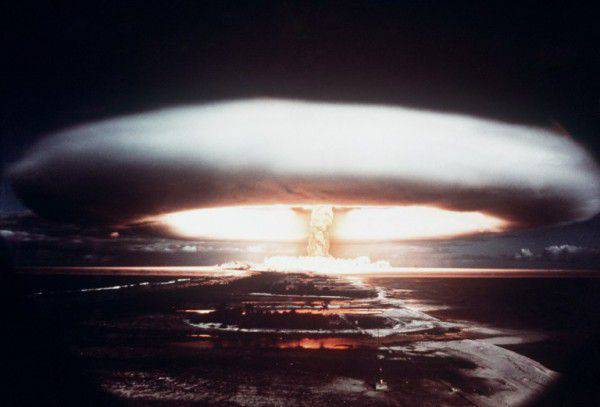 In the United States, the incident 53 a year ago, at the height of the Caribbean Crisis, which almost led to a nuclear war between the USA and the USSR, was made public. The commander of the start-up calculation of a secret missile base in Okinawa received an order to launch four missiles equipped with thermonuclear warheads. The officer did not execute the order immediately and contacted the command, which the order was canceled. The details of the operation are still secret.

October 28 1962, captain William Bassett received an order to launch four MGM-13 Mace cruise missiles with megaton thermonuclear warheads in Vladivostok, Beijing, Pyongyang and Hanoi, writes the Bulletin of the Atomic Scientists. Similar orders were received by the commanders of the calculations of three more secret bases of the United States located in Okinawa - all 32 missiles were supposed to take off. The verification of the decrypted document confirmed its authenticity, the international situation was critical — the very height of the Caribbean Crisis — however, Basset was embarrassed by the fact that the declared level of combat readiness of DEFCON 2 (on the verge of nuclear war) did not comply with the order. The US military was trained to use nuclear weapon with DEFCON 1 (nuclear war is inevitable).

The captain ordered to suspend the preparation of missiles for launch and ordered two soldiers to shoot the lieutenant who was standing at the launch console if he tried to launch before increasing the level of combat readiness or without Basset’s instructions. It seemed strange to the commander of the calculation that among the planned targets there was only one city of the Soviet Union - the main potential opponent of the United States at that time. "I also have only two goals in the Soviets," the duty officer from the neighboring base told William.

- When it all started, the captain warned us: this can be a real attack, and maybe the biggest mistake in our lives. “If this is a failure and we do not start up, do not wait for any reward or recognition,” George Bordn, a member of the start-up team, recounted the words of the commander. - After the incident, he strictly forbade us to tell about what happened.

The senior officer contacted the command and then canceled the order to launch the missiles. William Bassett died in the 2011 year, without telling anyone anything. Four years later, the US Air Force command allowed Bordna to tell about the incident in Okinawa. Journalists and scientists demanded that the Pentagon declassify official information about the incident half a century ago.

Similar история was in the Soviet Union. On the night of September 26, 1983, Lieutenant Colonel Stanislav Petrov took over as operational duty officer in the Serpukhov-15 bunker, a command post of the early warning system of a missile attack launched a year earlier. Unlike the American counterpart, our satellites did not look at the territory of the United States, but at the sky above it, as it were, from the side, from a remote point of orbit. Due to this, the rocket taking off was clearly visible against the background of a dark and cold sky in both the optical and infrared ranges. The task of the operational duty officer was to report the launch of the American ICBM to the country's leadership.

- We gave them extra time to think, 10-12 minutes. The rest of the 15 minutes is too late to think: you need to give the order to the launch calculations to spin the rocket gyros and enter the flight task, ”said Petrov.

The viewpoint “from beyond the horizon” was used by the Soviet military to minimize false alarms due to light reflected from snow and clouds. However, that night, for the first time in a year, the American bases, the sun and cirrus clouds in the troposphere were located in such a way that the light reflected from the latter deceived one of four Soviet satellites who were observing the American sky at that moment, and he transmitted a message about the launch of the rocket. And then about three more - from the same base. Petrov’s choice was small: either press a button and shift the burden of decision making onto Yuri Andropov with his “nuclear briefcase”. Or do not press and take responsibility for themselves. Petrov did not click.

“In those two or three minutes, you really won't analyze anything,” explained Petrov. - It remains intuition. I had two arguments. First, rocket attacks from one base do not begin, they take off from all at once. Secondly, a computer is by definition a fool. You never know what he will take over the launch ...

After the incident, changes were made to the EWS, and Lieutenant Colonel Petrov resigned from the army. The incident became known only after 10 years, and in the XXI century, Stanislav Petrov won several rare awards - for example, the crystal statue “Hand holding the globe” with the engraved “Man who prevented a nuclear war” from the UN and the World Citizens Association . Or the Dresden Prize awarded for the prevention of armed conflict.