November 10 2015
11
Despite all the attempts of engineers, the first jetpacks and other personal aircraft of Bell Aerosystes had one major drawback. The transportable fuel supply (hydrogen peroxide) allowed no more than 20-30 seconds to be in the air. Thus, all the company's developments were of great interest to specialists and the general public, but they had no real prospects. Nevertheless, the Wendell Moore team still managed to create a jetpack with a long duration of flight. The product Bell Jet Belt allowed to fly more than 20 minutes.


Experiments that have been going on for several years have shown that hydrogen peroxide engines cannot be used as part of high-grade jet packs. These engines had a simple design, but did not differ economically. So, the engine of one of the Bell's apparatuses consumed 7 gallons (about 27 l) of fuel in just 30 s. This meant that the only way to increase the duration of the flight was to use a different engine. Development of a new project using a new power plant was launched in 1965 year.

After a couple of failures, U. Moore was able to convince representatives of the military department in the prospects of his new project. This time it was proposed to build a jet pack based on a turbojet engine. Such an engine differed from the existing ones working on hydrogen peroxide, much more fuel efficiency and allowed to count on high performance. 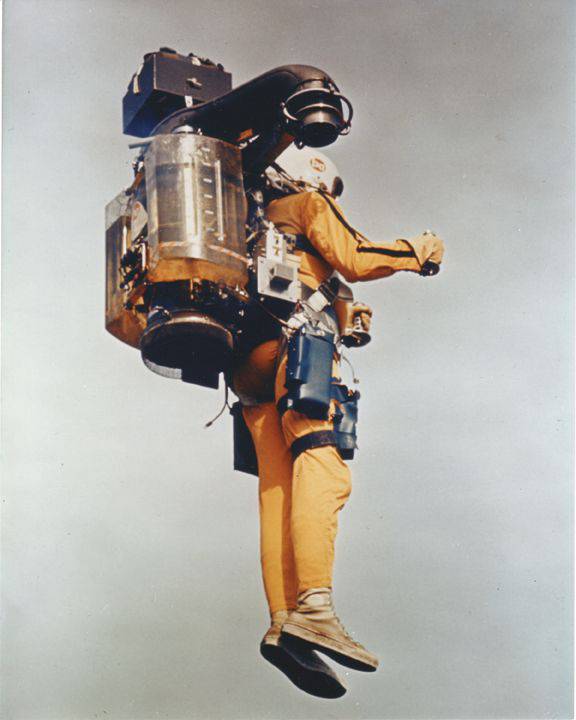 Pentagon experts agreed with the arguments of the representatives of Bell Aerosystems and opened funding for the new project. The promising jetpack with the new engine was named Bell Jet Belt ("Bell Turbine Belt"). Apparently, the name was chosen by analogy with one of the previous projects, Rocket Belt.

The main element of the new aircraft was to be a turbojet engine with a number of specific features. It was necessary to create a motor of small size and weight, which has acceptable indicators of thrust and fuel consumption. For help in creating the engine, the team of W. Moore turned to the Williams Research Corporation. This organization had some experience in creating turbojet engines, which was planned to be used in a new project.

The result of the work of specialists of Williams Research Corp. under the leadership of John C. Halbert was the emergence of a twin-turbojet WR19. The requirements of the project colleagues were quite high; moreover, technological difficulties affected the work progress.

The Halbert team was ordered a minimum-sized twin-turbojet engine. The use of a dual circuit scheme was associated with the intended use of the engine. The fact is that mixing the hot jet gases from the internal circuit with the cold air of the low pressure circuit led to some cooling of the jet stream. This feature of the engine made it less dangerous for the pilot. Given the overall architecture of the Jet Belt satchel, we can assume that it was the only suitable variant of the power plant.

Development of the engine WR19 lasted several years, because of which the assembly of an experienced jet pack was launched only at the end of 1968 year. The new engine weighed just 31 kg and developed thrust to 1900 N (around 195 kgf). Thus, the WR19 product could easily lift itself into the air, other equipment of the knapsack and pilot, including, possibly, with a small additional payload.

Bell Jet Belt jetpack was developed using some of the developments from previous projects, but using a new engine and other units. The basis of the design was a support frame with a corset and a belt system, redistributing the weight of the knapsack to the pilot's body while on the ground and vice versa during the flight. The engine was fastened on the back of the frame, on the sides of which two fuel tanks were located. Above the engine there was a nozzle block, the units of which were proposed to be used for maneuvering.

The twin-turbojet engine was located downstream of the air intake. To protect against various objects that may get into the engine, the air intake was equipped with a mesh filter. The engine nozzle was at the top, at the level of the pilot's head. There was also a special nozzle unit, the design of which was probably created taking into account the developments for the old engines on hydrogen peroxide. 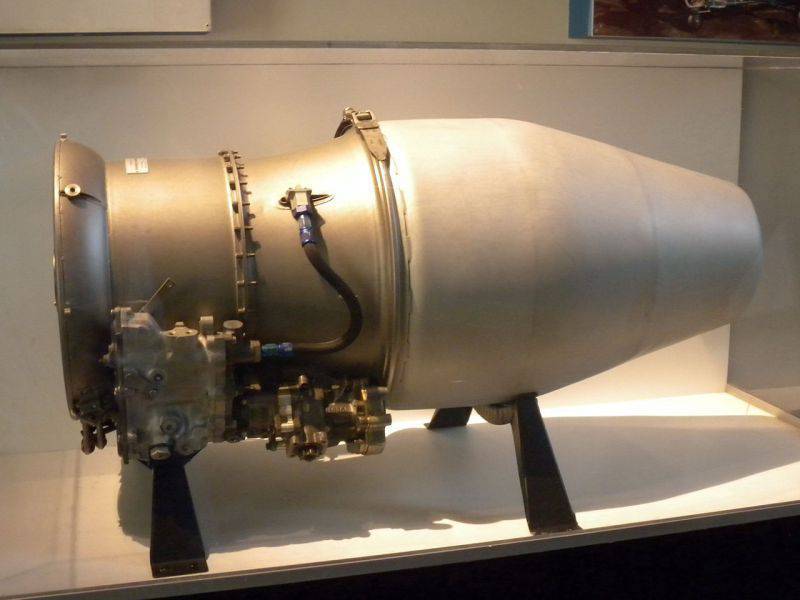 Reactive gases of the engine were divided into two streams and sent to two curved pipes with nozzles at the ends. The nozzle was driving two streams down the sides of the pilot. Thus, in terms of overall layout, the new Jet Belt was almost no different from the old Rocket Belt. To control the thrust vector, the nozzles were mounted on hinges and could swing in two planes.

The control system was borrowed with some changes from the previous experimental apparatus of Bell. With movable nozzles connected two levers, which were brought forward, under the pilot's hands. In addition, for greater rigidity of the structure to the levers added a pair of struts. On the removed parts of the levers were located the control knobs, with which the pilot could regulate the thrust and other parameters of the engine. With the help of the right-hand crank, the engine thrust was changed. The left handle allowed to turn right or left with the help of special devices on the nozzles. The simultaneous tilt of the levers forward or backward allowed to make a forward flight in the desired direction.

According to some information, a timer was kept in the onboard equipment to determine the duration of the flight and to warn the pilot about the development of fuel. In addition, testers on the ground could keep track of fuel consumption. To do this, the tanks are made of transparent plastic. On the walls there were dimensional scales. 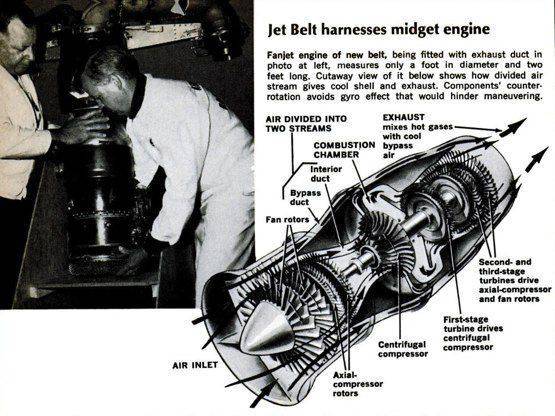 Despite the use of a dual-circuit engine, the temperature of the reactive gases remained too high. Because of this, the pilot had to use protective overalls and appropriate shoes. In addition, the safety of the head, organs of sight and hearing was ensured with a soundproof helmet and goggles. The pilot’s helmet was equipped with a headset associated with a walkie-talkie to communicate with the ground crew. The radio was transferred to the pouch on the belt.

A landing parachute was installed on the upper part of the nozzle block. Due to the risks associated with the use of a turbojet engine, it was decided to equip the device with rescue equipment. If necessary, the pilot could open the parachute and fall on it to the ground. However, effective use of this tool was provided only at altitudes greater than 20-22 m.

The assembly of the first experienced "Jet Belt" was completed only in spring 1969 of the year. Shortly thereafter, test flights began in the hangar on a leash, the results of which the device was released into free flight. 7 April 69-th on the airfield of Niagara Falls test-pilot Robert Kouter for the first time lifted the device into the air without safety equipment. During the first flight, the tester climbed to a height of about 7 meters and flew in a circle about 100 m. The maximum speed during this flight reached 45 km / h. It is noteworthy that during the first flight, the Bell Jet Belt product consumed only a small part of the fuel poured into the tanks. 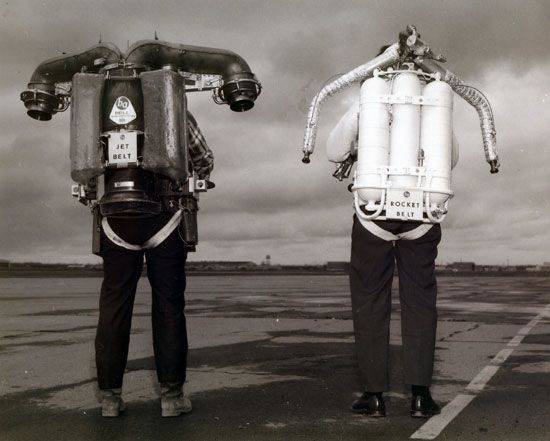 Over the next few weeks, testers performed a series of test flights. During the tests, the speed and duration of the flight increased steadily. Until the end of the test, the flight duration at the level of 5 was reached. Checks and calculations showed that with maximum fueling, the “Jet Belt” could stay in the air for up to 25 minutes, reaching a speed of up to 135 km / h. Thus, the characteristics of the new personal aircraft allowed us to make plans for its use in practice.

At the end of 1968, Wendell Moore suffered a heart attack, the consequences of which later again made themselves felt. 29 May 69-th engineer died, which actually put an end to all projects of promising aircraft. After his death, Moore’s colleagues attempted to complete the Jet Belt project and fulfill the terms of the contract with the military. Soon the device was presented to the customer representatives and received an official review.

Probably, the authors of the project doubted that their development in its current form would be of interest to the military and would go to mass production in the interests of the army. The device turned out too heavy: about 60-70 kg with full refueling. In addition, he was difficult to manage and reacted to the movement of levers with some delay. Also noted was the difficulty of landing with a heavy apparatus on the back. 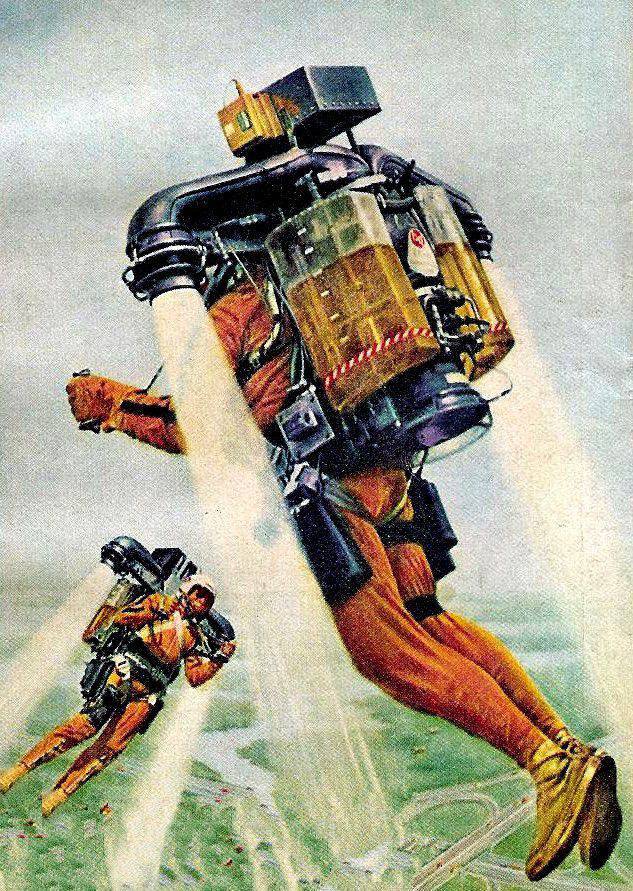 Flying on the "Jet Belt" in the artist's view. Figure Davidszondy.com

Pentagon representatives got acquainted with the Bell Jet Belt product and recognized its superiority over other developments of the contracting company. However, this jet pack did not suit the military. The customer’s decision was affected by the identified design flaws, as well as its low survivability. In combat conditions, such a vehicle, having no protection, could be an easy target for the enemy. For its destruction did not require any special tools. Even small weapon could inflict severe damage to the turbojet engine, after which it could not continue to work. In addition, the engine posed a danger to the pilot and surrounding people during an emergency landing. When the engine is deformed, a blade separation could occur with consequences similar to the result of a mine explosion.

The death of the creator and the refusal of the military led to the halting of the Bell Jet Belt project. After the test was completed, the device was sent to storage because it was no longer of interest to customers and company management. Moreover, the project and the whole direction lost the main ideological inspirer and leader. Without U. Moore, no one wanted to do a promising, but difficult direction. As a result, all work on personal aircraft stopped.

By the spring of the 1969, only one Jet Belt was built, which was later used in short trials. After the closure of the direction, the apparatus and the documentation on it, as well as documents of previous projects, were kept by Bell, but were soon sold. In 1970, all the drawings and papers for all projects in this direction were sold out. In addition, some prototype apparatuses changed their hosts. Thus, an experienced "Jet Belt" and all the relevant documents were sold to Williams Research Corp. Design documentation was later used in some new projects, and the only Jet Belt prototype soon became a museum piece and retains this status to this day.