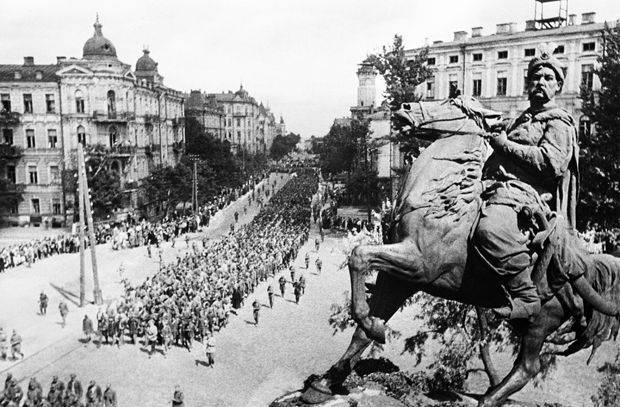 Unlearned lessons from the past can cost the current Ukrainian politicians as much as their predecessors of 71 a year ago.
Today, forever entered the national history as the day of the complete liberation of Ukraine in the 1944 year from the Nazi invaders. It was 28 of October 71 a year ago the last units of the invaders were knocked out of the Ukrainian land.

In Ukraine itself, this day is celebrated as a national holiday. It is celebrated even today, including by officials - no matter how much the other “svidomi” politicians would like to wish otherwise. The merit of the fact that in the modern Ukrainian state this day could not be betrayed to final oblivion, belongs, surprisingly, to President Viktor Yushchenko. It was his decree from October 20 2009 of the year, on the eve of the 65 anniversary of the liberation, that the national holiday was set - “The Day of Ukraine’s Liberation from Fascist Invaders”. Apparently, Yushchenko, far better than the current leaders of Ukraine, understood how dangerous and short-sighted to give up his own history, no matter what short-term political capital promised such a refusal.

The enemies burned their native hut ...

Turned out in the summer of 1941, at the forefront of the German offensive, Ukraine by the end of the autumn of the same year was completely under the rule of the Nazi invaders. But, despite such a speed of capture, one cannot say that it was easy for the Wehrmacht. After all, it is worth remembering that, according to the initial plans of the German command, by the end of July the war should have ended on the banks of the Volga, and even the Urals.

Interrupt the victorious procession of the German army in Europe and turn every day of the offensive into a nightmare to a large extent succeeded precisely in Ukraine. Suffice it to recall at least tank the battle of Dubno - Lutsk - Brody, which became the largest tank battle during the Second World War. Or the defense of Kiev, which lasted from July 7 to September 19, 1941, the defense of Odessa, which lasted 72 days - from August 5 to October 16. And the first counterattacks - though not always successful, often ending with new retreats, but forcing the enemy to stop and defend themselves - were also undertaken mainly on Ukrainian soil.

But already in December 1942, after the completion of the entourage of Field Marshal Paulus’s 6 army at Stalingrad, the advancing Soviet troops liberated the first Ukrainian villages and cities in Eastern Donbass. And in January of the next, 1943, the successive liberation of Ukraine began, which lasted until the autumn of 1944. And it should be noted that during this period up to half of all Soviet troops that took part in the hostilities of the Great Patriotic War were concentrated on Ukrainian soil.

Four hits out of ten

For more than a year and a half, which continued the gradual liberation of Ukraine, the Red Army conducted a total of 15 offensive operations on its territory: strategic 11 and frontal 4. The latter were part of the famous Ten Stalin Strikes, the largest offensive operations of the 1944 of the year carried out by the armed forces of the Soviet Union and its allies. The Dnieper-Carpathian operation (second strike) occurred in February-March, actually merging into one Odessa and Crimean operations (third strike) turned around in March-May, the Lvov-Sandomir operation (sixth strike) - in July-August. The fourth front-line operation carried out on the Ukrainian land, the Eastern Carpathian (ninth strike), was the final one: it began on September 8 and ended on October 28, when the liberation of Transcarpathian Ukraine ended. 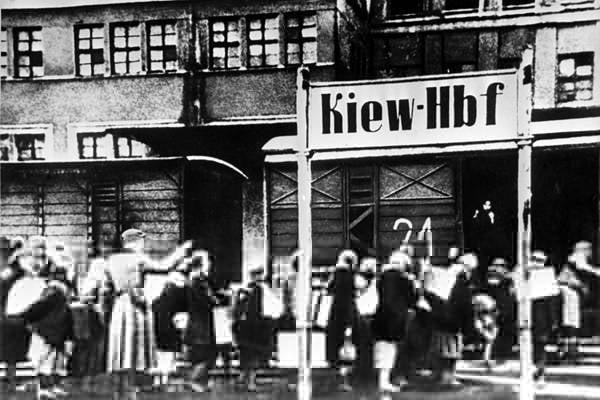 Sending Ukrainians by the fascist invaders to Germany. Photo: TASS
A more detailed chronology of the release is as follows. 23 August 1943 of the year Kharkov was liberated during the Belgorod-Kharkov offensive operation Rumyantsev. September 23 during the Chernigov-Poltava operation was stormed by Poltava, November 6 during the Kiev offensive operation - Kiev. 2 February 1944 of the Year - Exactly which Hitler appointed 20 of August 1941 of August the capital of the new administrative unit of the Third Reich - Reich Commissariat Ukraine (Erich Koch was appointed Reich Commissar). 10 April Odessa was liberated, 27 July, Soviet troops entered Lviv. October 27 The Red Army liberated Uzhgorod - the last major settlement held by the Wehrmacht on the territory of Ukraine. On October 28, the troops of the 1 of the Ukrainian Front, with the participation of the Czechoslovak Army Corps of 1, reached the USSR border, which marked the complete liberation of the Ukrainian land from the Nazi occupiers. Ukraine was completely liberated.

All four Ukrainian fronts brought freedom to the peoples of Ukraine, at different times commanded by such famous Soviet commanders as Georgy Zhukov, Rodion Malinovsky, Fedor Tolbukhin, Nikolai Vatutin, Ivan Konev. It is noteworthy that with the liberation of Ukrainian territory and the mobilization of liberated Ukrainians, their share in the personnel of the Ukrainian fronts increased significantly: by October 1944, every six out of ten soldiers of these fronts were immigrants from Ukraine. They were assisted by the troops of the 1st Belorussian Front and the sailors of the Black Sea fleetas well as hundreds of thousands of Ukrainian partisans, including such large units as the 1st Ukrainian partisan division twice Hero of the Soviet Union, Major General Sidor Kovpak. The victory went to these formations at a high price: between August 1943 and October 1944, on the Ukrainian soil, the Red Army lost a total of 2,6 million soldiers and officers, of which nearly 824 thousand were killed and died from wounds.

Gone with a hurricane named "Ost"

The occupation of Ukraine, which lasted a total of 1224 days, to the civilian population of the republic, was even more expensive. According to Russian official data, which are known today, during the war, the number of inhabitants of Ukraine decreased by 7,5 million people: from 41,5 to 34 million. The republic was able to restore the prewar population only by the middle of 1958 year — that is, in almost a half dozen years! 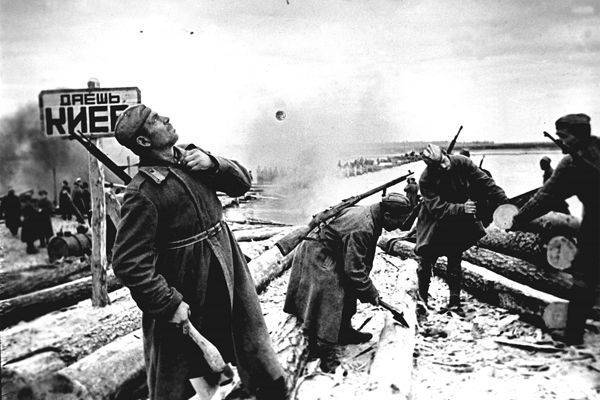 Soviet sappers suggest crossing the Dnieper. Photo: TASS
Ukrainian historians claim that the country's losses were even greater: about 9 million people. According to a recent study of the demographic consequences of the Second World War for Ukraine, conducted by researchers at the Institute of Demography and Social Research. Mv Ptukhs of the National Academy of Sciences of Ukraine, this number included irretrievable losses of both Ukrainians — the Red Army soldiers for the entire war (2,4 million), and the red partisans and militias (200 000 people), and losses due to the migration of Ukraine’s residents outside the USSR (1,7 million) .

Sadly, half of the total number of casualties was civilians - 4,4 million people. People died primarily from the mass terror of the occupiers and the catastrophic deterioration of living conditions. In absolute terms, this ratio looks like this: 1,4 million people - losses as a result of a significant increase in mortality due to a catastrophic decline in living standards, lack of adequate medical care, epidemics and mass starvation, over 3 million people - intentionally destroyed by the occupation authorities and their henchmen. Of these 3 million, sent to death in full accordance with the inhuman plan “Ost”, which provided for clearing the “living space” for the residents of the Third Reich, a million are Jews, which constituted a significant part of the population of Ukraine on the eve of the war.

On the other side of the truth

Among the losses sustained by the Ukrainian people during the Second World War, Ukrainian historians today include “warriors - residents of Ukraine as part of military formations of other states and armed formations of the UPA”. As such, they number about 300 thousands of people.

But to include them in the total number of losses of Ukraine during the war years is the same blasphemy, as well as putting in one row the veterans of the Red Army and the same UPA. Because the essence of collaborators, no matter how sophisticated in choosing the most neutral definitions, remains the same: betrayal. Which naturally led to the fact that these "formations" most actively, and often with sincere zeal, participated in the destruction of the civilian population of their country: their neighbors, former friends, and often distant relatives.

According to the information available to date, during the years of the Great Patriotic War, only through the Wehrmacht, the SS (the troops of this criminal organization included the notorious 14-i Waffen-Grenadier Division “Galicia”, recruited almost entirely from Galicia’s inhabitants) and other pro-German paramilitary and police units during the war years passed 250 thousands of Ukrainians. And the total number of losses of these formations, which today are used by biased Ukrainian historians and which almost coincides with these figures, is easily explained: the number of “losses” includes those collaborators who were destroyed by the Red Army and protection units of the liberated territories.

The liberation of Ukraine, which is widely, often very sincerely and from the heart, no matter how much Kiev’s politicians like it, is celebrated today in this country, including the liberation of it from this scum. Alas, weed these weeds up to the end failed, and over time, the former "rebels" lifted their heads, raised themselves a worthy change and began to rewrite history. It got to the point that today, on a holiday, the Chairman of the Verkhovna Rada, Vladimir Groysman, during the laying of flowers in the Park of Glory in Kiev, stated the need to establish a "holiday of liberation from Russian invaders." Well, you can prescribe invented holidays as much as you like. It is only necessary to remember that later the country itself, with its will, is freed from such “nominators” and already marks this day as a real holiday. So, as it happened 71 a year ago, October 28 1944.

Ctrl Enter
Noticed oshЫbku Highlight text and press. Ctrl + Enter
We are
Diplomats of the People's Commissariat of Defense: on the eve and during the warFather told
Military Reviewin Yandex News
Military Reviewin Google News
12 comments
Information
Dear reader, to leave comments on the publication, you must to register.