Russia and Serbia could sign a unique military contract 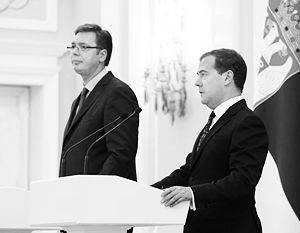 In Russia, the three-day visit is Serbian Prime Minister Aleksandar Vučić. Vzglyad became known to the main purpose of the visit: an unprecedented amount and filling military contract. His signing may be a sensation. In fact, against the background of the scandal with the imminent accession of Montenegro to NATO, Moscow has found a way to avoid joining the alliance still Serbia.


The contract, which brought with him Vucic, involves the almost complete retooling of the Serbian Army under the Russian standards.

Firstly, we are talking about long-term technical support for the Nora howitzers with Russian wheelsets. It is necessary that the machine itself, on which the howitzer gun is installed (this is, in fact, a light BMD used by Russian airborne units), could withstand up to 35 tons of payload. And this requires a contract with KamAZ, which alone is able to retool Serbian systems. “Nora”, as events in Novorossia showed, is extremely useful in everyday life, especially in off-road conditions and uncertain terrain, in particular, in swamps and in mud. It is very important for Serbia with its eternal problems on the Croatian border.

Secondly, the new Serbian platforms “Lazar-2” will be equipped with Russian 30-mm 2А42 guns, better known in the export version as “the 242 product”. The Serbian Light BTR "Lazar-2" is not even a BTR, but rather a kind of lightweight hybrid, similar to what is commonly called the armored reconnaissance and sabotage vehicle (BRDM) in the USSR and modern Russia. It is lighter than the classic platform, but in Serbian conditions, just like Nora, can be used as an offensive assault. weapons. Only for this it must be equipped with serious artillery weapons. Here, under this system, 30-mm guns will be delivered, which have proven themselves well in several local conflicts. They can also be installed in a twin system, which makes the Serbian Lazar-2 almost a light tank. For Balkan conditions, this is a universal weapon that fully meets the needs of the modern Serbian army, which, unlike the old JNA, will not be overloaded with heavy tanks and barrel artillery.

There are a number of questions to the Russian 2А42 system, especially on the accuracy of shooting, but this is already a reflection for professionals. The main thing is that this kind of re-equipment of Serbian ground forces strategically answers precisely Balkan requests. In addition, there is a special export module, which, as a rule, is supplied to third countries, but a new one is likely to be created for Serbia. The 30-mm gun has a different configuration by the number of ammunition (from 250 to 460 shots). At one time, various modifications were attempting to release the old Yugoslavia, but unsuccessfully, and moreover focused on the old wheeled armored personnel carrier Zastava, which had long been discontinued.

Finally, we are talking about possible supplies of missile defense systems to the republic, which is truly unique, both for the very scheme of the Russian-Serbian military-technical cooperation and for the system of organization of the Serbian army itself. Not that in Belgrade they suddenly decided to make war with someone. The organization of the missile defense system, especially for low-flying targets, is a strategic defense system that the old JNA did not have. It is not yet clear what systems the Serbs claim and what amount they are counting on, but it is already clear that organizing a missile defense system on low-flying targets is a unique contract, comparable only to C-300 supplies to Iran. It is possible, by the way, that such systems are being discussed now.

In the Serbian General Staff emphasized that the essence of the issue in countering tactical missiles, do not have a ballistic trajectory. These in the region have only NATO countries, and not the traditional opponents of Belgrade.

Such re-Serb army, if it really will be implemented, will lead to the practical failure of any plans for Serbia's integration into NATO, because in fact displays the republic from a single system modernization, which is prepared in the alliance to new countries, but will also create an independent missile defense system in the region. In addition, most of the new supply of the Serbian Army will be focused on the Russian system of ammunition and spare parts, which does not allow for the transition of Belgrade to NATO standards caliber and unification of supply.
The total amount of the proposed contract is difficult to calculate, but it can tentatively fluctuate around five billion euros - an amount unthinkable for the Balkan countries. Against this background, any energy and innovative projects are dim, even if it is assumed that the contract will be based on a long-term credit system.

In addition to the above, Serbia will receive up to a dozen transport helicopters, two of which have already been paid, and one of them will come to the republic until the end of this year. The Serbian army is now claiming to have and attack helicopters, but it's unclear what specific configuration. It is possible that the total number of helicopter fleet exceeds 16 units.

In any case the contract if it is implemented, is unique not only for Serbia but for the whole Balkan region as a whole.

Ctrl Enter
Noticed oshЫbku Highlight text and press. Ctrl + Enter
We are
Tomislav Nikolic: relations between Serbia and Russia are exceptionalOleg Valetsky about the wars in the Balkans, their causes and Russian volunteers
Military Reviewin Yandex News
Military Reviewin Google News
56 comments
Information
Dear reader, to leave comments on the publication, you must to register.