Landing operations in the war against Japan 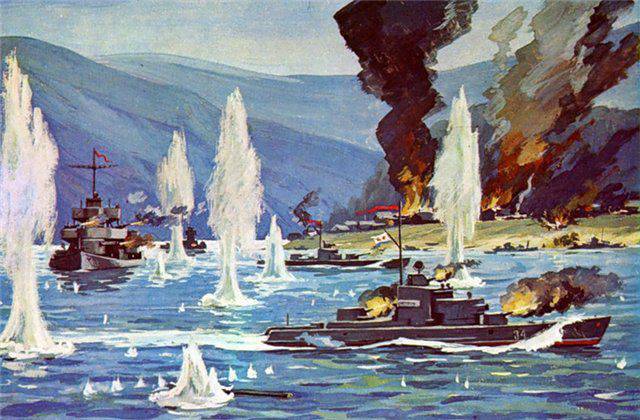 Since the beginning of the war against Japan, the Pacific Fleet has provided active and invaluable assistance to the troops of the two Far Eastern fronts by landing operations. Marines in the ports of Yuki (Ungi) 11 of August and Racine (Nachrzyn) 12 of August did not meet with strong opposition from the enemy. The Seisin landing operation was of a different nature, requiring the sailors to overcome a powerful defense.

The large city and port of Seishin (Chongjin) was surrounded by two lines of barriers reinforced by minefields. Up to 180 bunkers and bunkers defended approaches to it. The garrison numbered nearly 4000 people. To weaken enemy defenses, Pacific Air Force fleet under the command of lieutenant general aviation P. Lemeshko and torpedo boats of captain of the 2nd rank N. Kuhta delivered effective attacks on the port and the defenses on August 9 and 10.

The plan of the operation envisaged: August 13 reconnaissance from the sea to identify groups of Japanese troops, the defense system in Seysin, and then, landing troops, seize the naval base and hold it until the approach of the ground units of the 25 Army, leading the offensive along the coast.

The landing force consisted of an advance detachment as part of the fleet headquarters reconnaissance detachment and a company of machine gunners, the entire 181 man of the first echelon, consisting of the 355 st separate battalion of the marines, the second echelon (13 st and the third echelon (335 rifle division) ). A group of ships, which included the minelayer Argun, the destroyer Voikov, 8 patrol ships, 7 minesweepers, 18 torpedo and patrol boats, 12 amphibious ships and 7 transports, were brought to the landing site. Landing forces operated under the command of Captain 1 of the rank of A. Studenichnikov, and the landing force was led by the commander of the 13th Marine Brigade, Major General V. Trushin. Cover and air support were provided by the fleet air group (261 aircraft).

Due to the very limited time, everything was allotted for two days, the period of preparation for the operation was shortened. However, there was no doubt about its success: the marines and ships were well prepared.

Intelligence combat failed. Having occupied the 13 of August without loss of the mooring lines, the forward detachment of the landing force rushed into the city. But here I met a strong opposition of the superior forces of the enemy. Without air support (due to bad weather), paratroopers fought heavy battles until the end of the day and night. The first echelon, which landed on August 14 in the early morning, managed to seize a bridgehead with a length of about 2 km along the front and more than 1 km in depth, but he, together with the forward detachment, found himself in a critical position pressed to the water. During the night, the Pacific Ocean repulsed 14 attacks, holding a narrow strip of the coast until the main forces approached. 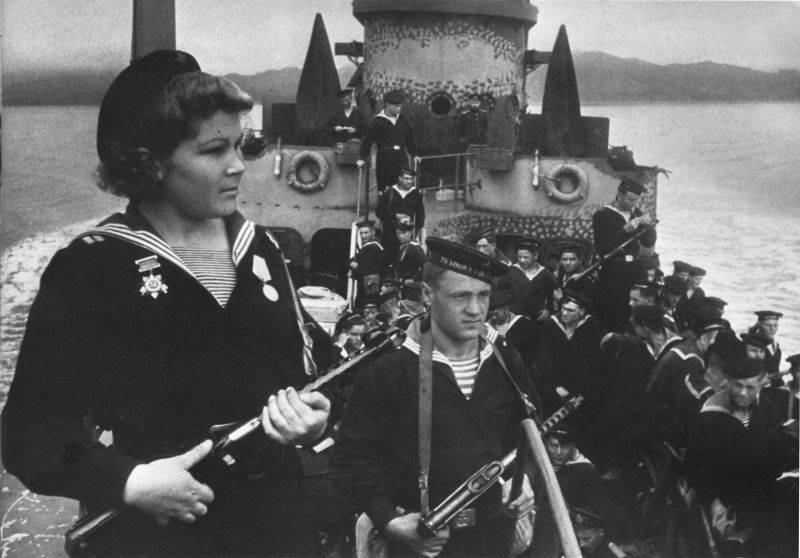 In heavy fighting seamen behaved heroically. A company of machine gunners under the command of Senior Lieutenant I. Yarotsky exterminated more than 150 Japanese soldiers and officers. Thirteen times he went to the reconnaissance platoon headed by Lieutenant P. Puzikov. The scouts managed to destroy the guard of the Seysin prison and free 50 of the Chinese and Koreans in chains. Sergeant K. Biryulya destroyed a Japanese machine gun with 28 fire, and when one of the platoon commanders was badly wounded, he took command. Under the leadership of a sergeant, the sailors disabled Japanese soldiers and officers up to 240.

The second echelon of the assault force landed in Seisin at dawn on August 15. After three hours, the 3 Brigade of the Marine Corps captured most of the city and reached the main fortifications of the enemy. The summer weather, established in the evening, allowed our aviation to inflict a series of strong blows on them. However, even with effective support from the sea and the air, the landing force was not able to take powerful fortifications in stride: the lack of artillery among the paratroopers affected. Transport ships "Nogin" and "Dalstroy", on which she was, when entering the harbor were blown up by American mines. It is worth noting that American aircraft put out the Japanese ports of Genzan, Seisin and Racine more than 780 mines, which was not a necessity. Information about the places of mines Soviet command received only 21 August. By this time, our troops had already occupied the entire coast of North Korea. On the same days, the minesweeper TSCH-279, the transport ships Suchan, Kamchatneft and the tanker No. 1 sank by American mines at Racine. Both retained buoyancy, but the unloading took a long time.

On the morning of August 16, the landing force launched a decisive offensive and fully mastered the Seysin. At the final stage of the operation, complete air and sea supremacy of Soviet aircraft and ships of the Pacific Fleet was achieved.

With the loss of Seisin, the defense of the Japanese troops in the Korean sector was disorganized. The port of Ethetin (Odezhin), which remained in their hands north of the 38 parallel, and the military base of Genzan, were taken by our naval landings 19 and 20 of August. 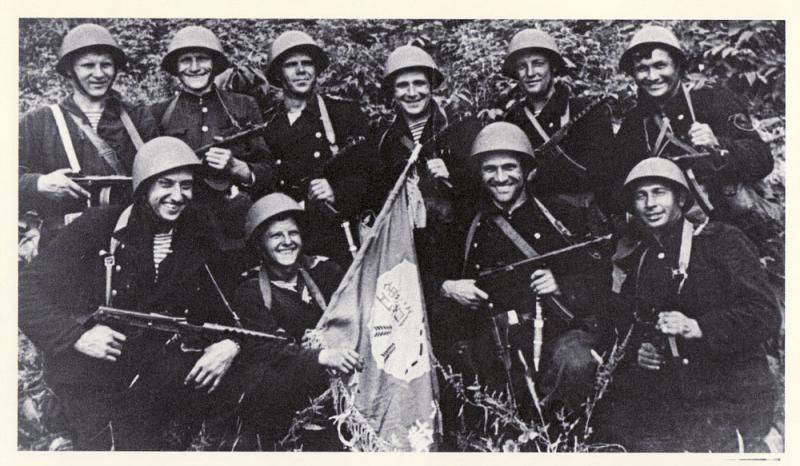 Landings in the Yuzhno-Sakhalin operation, which took place from 11 to 25 in August, played an important role. Landing troops landed in the ports of Toro (Shakhtersk), Maoka (Kholmsk) and the naval base Otomari (Korsakov), contributed to the rapid defeat of the enemy on the island and thwarted the evacuation of his troops. The landing of the main forces of these landings was preceded by covert actions of reconnaissance groups on the coast of the enemy.

In the Kuril amphibious operation, its first stage was especially difficult. It was associated with mastering the island of Shumsh, the nearest to Kamchatka, which had a strong defense (34 pillbox, a large number of pillboxes, underground galleries and communications).

Shumshu Island was a real island-fortress, which was emphasized in the documents of that period. Japanese troops in the north of the Kuril ridge totaled 23 thousand people, 77 tanks and 7 aircraft, and more than 60 thousand people were concentrated in the Kuril Islands. The Soviet group in Kamchatka was small and distributed along the coast. Two reinforced rifle regiments and a marine corps battalion (more than 8800 men, about 200 guns and mortars), 64 ships and ships (among them two patrol ships, one mine-layer and four minesweepers) were assigned to the airborne assault, and 68 aircraft covered the airborne forces. From these forces a forward detachment was formed, as well as first and second echelons.

It is worth noting that the forces intended for this operation were few. The enemy was superior to the Soviet landing force, both in manpower and in tanks, which the landing force did not have at all. We, in turn, had superiority in aviation and artillery systems. Although in fairness it should be noted that the superiority in aviation was relative due to the constant mists hanging over the Kuril Islands and the significant removal of airfields from Shumsh. The Soviet troops had to land on an unequipped coast, and besides, all field artillery systems were still in transport and could only be used after unloading onto the coast. The enemy relied on strong defenses, his artillery was able to operate effectively, having pre-shot areas.

The Soviet command planned to deliver a surprise attack on the Kataoka naval base with the forces of an assault force landed on the northern part of Shumsh. Then it was required to completely seize the island and further use it as a springboard for liberation from Japanese of Paramushir, Onekotan and the rest of the Kuril Islands.

Time to prepare for the operation was given a little more than a day. Despite this, the headquarters were able to ensure the regrouping and concentration of troops, the development and bringing to the performers the necessary documentation.

The fighting for Shumsh was intense. The island’s garrison acted with fanaticism inherent in the Japanese. 18 August, barely landing ships with the main forces approached the coast, they began a hurricane artillery fire from the bunker, equipped in a deep and difficult vulnerable from the sea caponier. Many ships were hit by shells, there were fires, people died. However, the paratroopers threw themselves into the water and traveled by swimming along the boiling water from the explosions to the shore. Sailors on ships and vessels, without weakening the shooting at the enemy, fought the fires, corrected the damage, did everything possible to support the paratroopers.

The landing ship DS-1 caught fire first. Lieutenant I. Permyakov, seeing that the flame was approaching the shells, despite the pain from burns, managed to roll them out of the fire.

Several shells hit the DS-2, and part of the crew died. The fire on the ship could not be extinguished for a long time. A minelayer Okhotsk, commanded by Lieutenant Commander V. Moiseenko, came to the rescue. Together, the two crews fire was eliminated.

Damaged DS-43 caught fire and ran aground. The Japanese intensified the fire on the ship from the bunker. Sailor I. Androschuk immediately responded by shooting with tracer bullets, denoting this as a target for ship artillery. Soon the enemy bunker was destroyed. The fire on the ship raged such that the sailors caught on their clothes, but they extinguished the flames with water, fire extinguishers, knocked them down with asbestos mats and managed to cope with the fire. 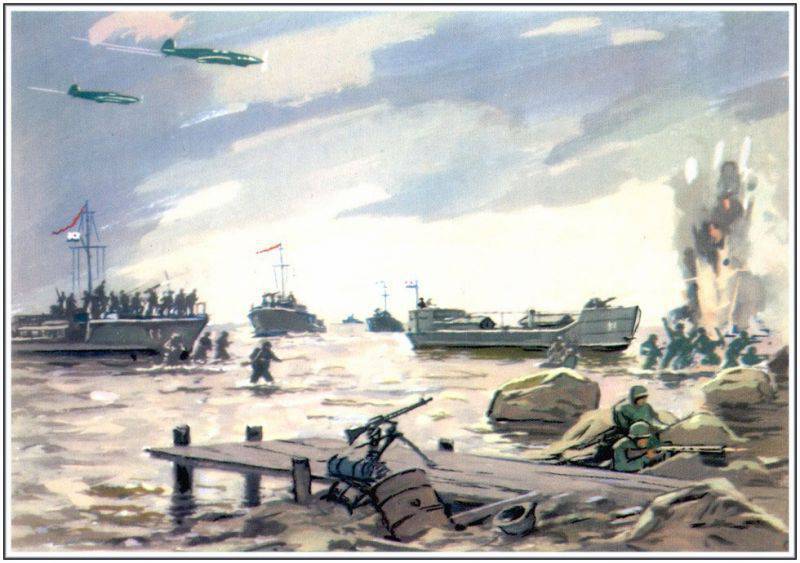 Damage and fire on the DS-47 were so significant that the crew had to flood it in order to avoid an explosion of their own ammunition. The mortally wounded commander gave the last order: survivors to reach the coast and join the landing force.

Difficult tests also fell to the share of DS-46, DS-5 and DS-6. The self-propelled barge (commander of foreman 1 of the article V. Sigov) under the devastating fire of the enemy was able to make several flights from transports to the coast, transferring paratroopers and evacuating the wounded. All three crew members were injured, but did not leave their seats until the end of the landing.

Fighting on the shore was also hard. The Japanese fired gun and machine-gun fire from the fortifications, attacked with tanks. The paratroopers had only wearable rifle weapons (the artillery was unloaded on the second day, and the aircraft was inactive because of the continuous fog). Nevertheless, the sailors captured the 5 bridgehead on the 6 km and held it firmly.

The heights prevailing on the island repeatedly passed from hand to hand.
The commander of the forward detachment, Major P. Shutov, and the commander of the Marine Battalion, Major T. Pocharev, selflessly acted in repelling tank attacks. Both were injured, but did not leave the battlefield. Senior Lieutenant S. Savushkin personally blew up the tank with a grenade, more than once his men fought hand to hand. A group of five sailors, M. Vlasenko, heroically repelled a Japanese tank attack. A. Vodinina, P. Babich, I. Kobzar and S. Rynda. They defended a small stretch of road that was bounded by rock and swamp. The enemy tanks went right through, and it was not easy for the sailors who had only grenades to hold them back. In this situation, A. Vodinin tied grenades and rushed under the head tank, undermining it, he tore off the attack. 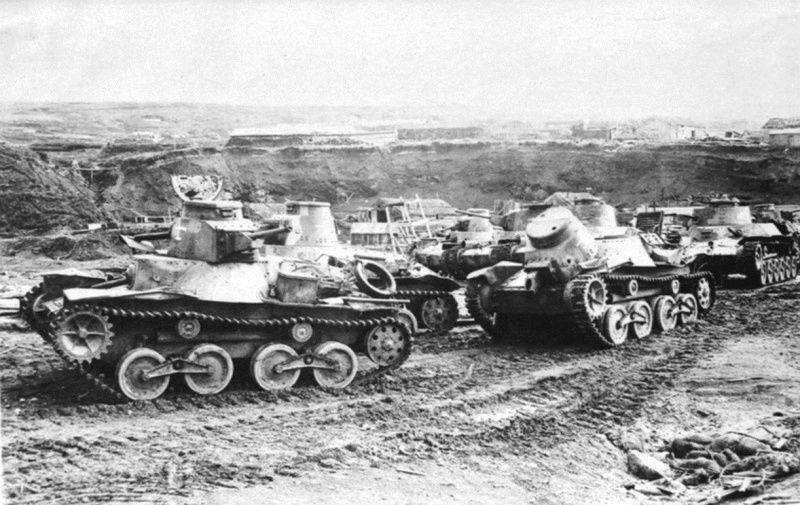 On August 19, after the unconditional surrender of Japan, negotiations began to disarm the Shumshu garrison. By evening, a complete agreement was reached, but the next morning, the Japanese violated it by treacherously bombarding a detachment of Soviet ships that had entered the Second Kuril Strait. Then the landing force landed on the offensive. The Japanese did not save the powerful structures, the enemy was thrown 6 km into the depths of the island. This strike had a sobering effect on the command of the garrison. Tense struggle for Fr. Shumshu ended on August 22 with the capture of more than 12 thousand Japanese soldiers and officers. 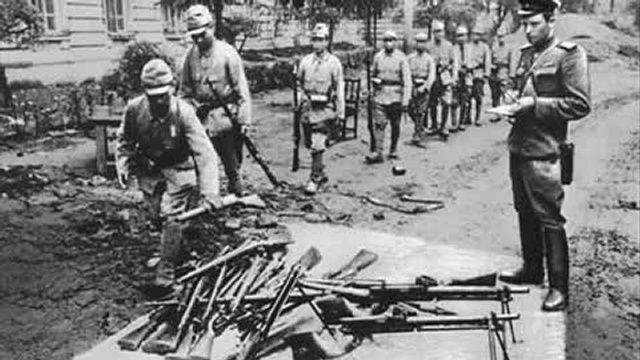 The rest of the Kuril Islands amphibious assault forces released in a short time - until 1 September 1945, without encountering resistance from the Japanese.