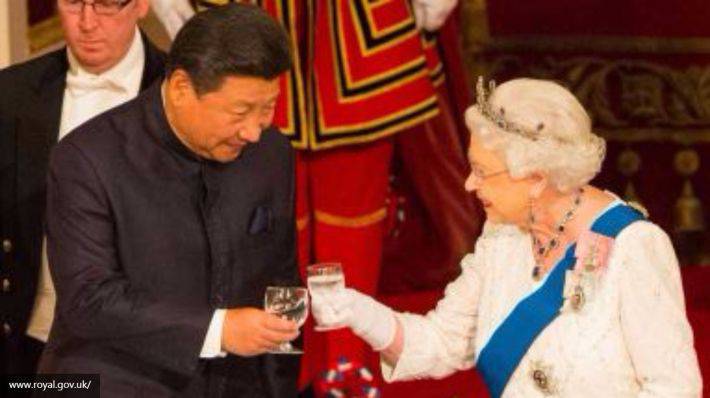 “As long as China remains a nation of drug addicts, we should not be afraid that this country will turn into a serious military power, since the use of opium sucks the life force out of the Chinese.”

Syria, Ukraine ... Ukraine, Syria ... The beam of media attention is customarily focused on these points, although the main events usually take place not at all where it is "lighter". But sometimes the "corner of the eye" manages to notice something obviously unusual and incomprehensible. As in the famous Hollywood film “People in Black”, where the hero of Will Smith during the casting began to shoot not by monsters, but by a little girl, in which - “This is instinct!” - he recognized “danger number one”. Since she “looked suspicious: what should a little white girl do at night in the ghetto among monsters with a textbook of quantum physics in her hands? She is clearly not what she wants to appear. ”

Xi Jinping’s current visit, the first in stories visit of the head of the Chinese state to Albion. For almost a week, from 19 to 23 of October, the chairman of the People's Republic of China is a guest of the British Queen.

Interestingly, he was greeted not just “on the highest level”, not as the head of a foreign state — but as some kind of higher being, almost like the Lord God or his representative on earth. So that Queen Elizabeth II personally selected dishes for the holiday table and supervised the process of serving, the Duchess of Cambridge and Kate Middleton, the “style icon”, flaunted the colors of the PRC flag in a dress, and did all the members of the Windsor family gather at the reception? So in Buckingham Palace - with a horse parade and personal walk in the royal carriage - did not take anyone and never.

What is the matter? Could it be that “Comrade Sy” brought about 150 contracts worth almost 40 billion dollars to London? Yes of course. And the amount as a whole is rather big, and nuclear energy should be developed. But for “Grandma Liza”, in whose personal property there are several world-class offshore companies with an annual turnover of tens of trillions of dollars, this is not the money for which it is worth trying so hard. And the most important thing is to cover the details of this visit in the mass media. Even the BBC, which always distanced itself from protocol events, this time led to almost a direct many hours of broadcasting “from the scene”, while the rest of the mass media of the “homeland of modern democracy” were crucified about the beginning of the “golden age” in relations between London and Beijing.

As for the “golden age,” we will remember and try to decipher further, but in official speeches both the host and guest parties did not say anything special that deserves attention. Well, except that the queen said about the “global partnership for the XXI century”, and the head of the PRC - that three generations of the Windsor family played a prominent role in the development of relations between the two countries. Perhaps the "special" was just the desire of the parties in every way to avoid the sharp corners of the "silence figure."

Of course, 24 Chinese sailor cadets who fought against Hitler in the ranks of the British forces, and Baron Michael Lindsay, who died in 1994, who helped the Chinese people’s national liberation struggle during World War II, died in World War II. But you must admit that “on the scales of history” they hardly mean more than those lost by China in the 19th century “Opium Wars” over 100 million population and 5 trillion dollars (in the equivalent of current prices). Not to mention all the vicissitudes of colonial humiliation, including more than a century and a half of Hong Kong under British sovereignty.

So with the unusually high level of reception of the Chairman of the People's Republic of China in London, everything is clear: he feels a cat ... But, as you know, "England has neither permanent allies, nor permanent enemies - England has only permanent interests." And, it turns out, today these interests are such that without a demonstration of a “global partnership” and almost a union with China, London cannot do?

To find out, you have to look at the background of the Chinese visit.

On October 7, a “Caspian salvo” took place - the launch of 26 Russian sea-launched Kalibr cruise missiles that hit targets over a distance of more than 1500 km.

October 9 in Lima (Peru) was the next summit of the IMF and the World Bank, at which the United States again refused to reform these international financial institutions.

In the first three quarters of 2015, the Chinese yuan came in first place among the currencies used in trading in the ASEAN zone.

In 2015, India and China continue to be the largest consumers of physical gold, cumulatively providing more than 80% of the global demand for yellow metal.

According to unofficial calculations, already in August 2015, the share of the BRICS countries accounted for over half of the world's gold reserves. In addition, they provide over 80% of the production of platinum and rare earth metals.

That is, the global confrontation in the modern world is not only evident, but continues to grow. At the same time, the main “battlefield” today is not Ukraine or Syria, but the European Union, and especially Germany, which, from the US point of view, it’s time to slaughter like a fed up pig. Of course, “slaughter” not literally, but metaphorically, through TTIP mechanisms (the “diesel” scandal with the Volkswagen concern, initiated by American “environmentalists”, is an obvious “attempt at writing” in this direction).

If Brussels and Berlin agree to sign the Transatlantic Partnership, we can congratulate America on a serious geo-strategic victory, since they will be able to take the Russian-Chinese heartland, in military terms, “into ticks” from both the Atlantic and Pacific. But so far this issue has not been resolved, and the “oscilloscope shooter” (in the immortal expression of Yulia Latynina) is still “tossing” one way or the other.

And at this moment, imagine, Great Britain - and in the person of the whole (!) Dynasty of the Windsor - in fact, it goes over to the side of China. In addition, openly stating that British banks will help turn the yuan into a global reserve currency ...

You can not hurt the old women!

In other words, the demonstrative design of the British-Chinese “global partnership for the 21st century” actually programs the transition of the entire continental Europe to the Russian-Chinese bloc (that’s Prime Minister David Cameron threatened Brussels with the UK leaving the EU and “broke” the Scotland independence referendum! ) ...

The “Atlantic” half of the American “geostrategic ticks” turned out to be broken - and if so, then the second, the “Pacific” half becomes useless. And who did it? A state that the United States for more than half a century considered its main ally!

The cry of betrayal, immediately coming from the other side of the Atlantic, could be dozens, hundreds of times stronger, but, firstly, not in American tradition to shout about their defeat, and secondly, what kind of betrayal can be talked about, if "England has no permanent allies and permanent enemies ..." and is this well known to all? The interests of England, where there is gold, and gold today in China ...

However, I personally consider the turning point in London-Washington relations to be March 2013 of the year when agents of the American Tax Service without any demand entered the British Virgin Islands (one of the above-mentioned global financial offshore companies and the personal property of Her Majesty Elizabeth II) in order to impose taxes and fines the assets that had escaped from the USA, dug out doubtful operations for almost $ 6 trillion - and wrap it all up ... It’s impossible to offend old women like that!

The already agreed invasion of Syria did not take place, but the brave Yankees were given good advice to "push" Russia through Ukraine, sanctions and lower world oil prices (which was not only beneficial for China, but also finally inclined Russia to "turn to the East") ... And today, with an unprecedented fanfare, accepting "Comrade C", the British Queen, apparently, is celebrating her "Victory Day".

This time - over America.

Ctrl Enter
Noticed oshЫbku Highlight text and press. Ctrl + Enter
We are
About Stalin and KhrushchevWhat you didn't want to know about England
Military Reviewin Yandex News
Military Reviewin Google News
37 comments
Information
Dear reader, to leave comments on the publication, you must sign in.