Russia as a "new force"

October 30 2015
28
US allies in the Middle East are looking in the direction of Russia. They are ready to establish ties with Moscow: the Russians have become a “new force” in the region. As for Washington, its policy in Syria is recognized as "slurred." Washington’s traditional Middle Eastern partners are increasingly unhappy with Obama and prefer to negotiate with the Kremlin. 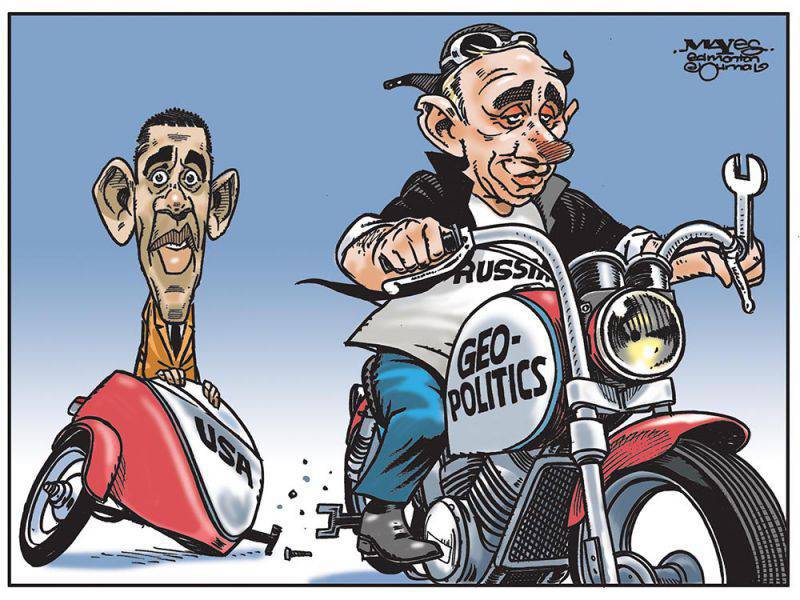 Putin and Obama in the geopolitical race (Edmontonjournal, USA) http://inopro.ru

Josh Rogin & Eli Lake at Bloomberg View write that the United States themselves are pushing their Middle Eastern allies "to Putin."

The traditional American allies in the Middle East, who were tired of the policies of President Barack Obama in Syria, have now turned "towards a resurgent Russia."

Some experts in Washington present these new connections as a threat to the interests of the United States, especially because the United States has been “working” in the region since 1970, trying to nullify Russia's influence there. The Obama administration thinks otherwise. The State Department is now "quietly encouraging" US allies to establish ties with Moscow.

US Secretary of State John Kerry believes that cooperation with Russia could lead to the start of peace talks in Syria, which would finally solve the problem of the Syrian civil war. However, Russia has consistently opposed Kerry's proposals. While Kerry conducts his diplomacy, the Russians send Tanks, bombers and soldiers to Syria. The Russian Air Force is focusing its bombing on US-backed opposition targets instead of Islamic State targets, the newspaper writes. Meanwhile, the “common enemy," according to Kerry, are only the IS terrorists.

Still, Kerry is promoting his plan, trying to convince Russia to become an American partner and “stabilize” the Middle East. It was Kerry who held a meeting at the level of foreign ministers of Russia, Saudi Arabia and Turkey last Friday in Vienna and expressed optimism that the four countries will be able to work together in Syria.

According to Kerry, the parties may disagree with respect to Bashar Assad, but “clearly agree” on the issue of the conflict resolution process. It is very important to have a “starting point,” Mr. Kerry remarked.

After this meeting, Russian Foreign Minister Sergei Lavrov, in his speech to the press, criticized the US policy in the region. He recalled the US intervention in the affairs of Iraq and Libya and said that Russia would never support a plan that includes a regime change in Damascus. All the "rumors" about a possible "deal" on Assad, Minister Lavrov, rejected: "All this is wrong."

Kerry recently said that the United States could agree to keep Assad in power for a transitional period.

Josh Rogin and Eli Lake see the political situation in the region as follows: while John Kerry is trying to convince Russia to join the Western coalition, Putin convinces America’s Middle Eastern allies that Moscow has a new power in the region.

Prince Turki al-Faisal, the former ambassador of Saudi Arabia in Washington and the former chief of intelligence, believes that Russia currently deserves both attention and respect. At the same time, the prince called Putin "a man who did a lot of harm to innocent people throughout Syria." However, al-Faisal added that he (Putin) is the head of a “big state”, understanding that this state “must play a role in making world decisions.” Therefore, the Middle East should "deal with it." One can neither ignore him, nor accuse him of "delusions of grandeur"; he (Putin) has such a “vision and strategy” that translate on the spot into a certain “concept”. Assad’s visit to Moscow is Putin’s specific message to the region: anyone who wants to overthrow Assad will deal with him (with Putin). At the same time, the Russian president is hardly sincere when he speaks of his desire to fight the “Islamic State”, however, after all, the “US coalition did not use the necessary resources for a similar mission.”

Meanwhile, Russia is successfully advancing in the region: on the same day, when the meeting was held in Vienna, Moscow signed an agreement with Jordan on military coordination in the fight against the Islamic State.

There is no need to fly to Saudi Arabia for the agreement; the Saudi defense minister himself visited Moscow earlier this month.

Other Gulf countries have also sent their senior diplomats to Moscow over the past two weeks, precisely to discuss Russia's recent moves in Syria.

One senior Arab diplomat (name not given) told American journalists that these discussions were mainly about assessing Russia's long-term intentions in Syria. Also, the envoys tried to convince Moscow to bomb the "Islamic State", rather than the position of "moderate rebels."

Finally, those American allies who are not active in multilateral diplomacy on Syria also believe that closer ties should be established with Moscow. Here is one of the latest examples: this month, after Prime Minister Benjamin Netanyahu spoke with Putin, Israel established a hotline with the Russian military. The goal of this line is to avoid an accidental clash of two states in the region. Another example is Egypt. After Egyptian President al-Sisi visited Putin in August, he promised that Egypt would work together with Moscow against the Islamic State.

A retired American general, Jack Keane, said that Moscow had staked on the inaction of Washington. “Putin is counting on the United States to fear escalation and confrontation,” Mr. Keen said. “We must continue to insist on Assad’s departure,” the retiree believes, “but we must be realistic. The decisive role is now played by Russia, while it protects Assad. ”

Some people in the Obama administration say that the only way to turn Russia into a "constructive partner" in Syria is coercion: for example, sanctions against Putin personally, along with more effective military aid to insurgents who are "attacked by Putin."

But the White House, the journalists point out, does not want an escalation of pressure on Russia. The administration’s guiding principle is the desire to “avoid a new crisis with Moscow”.

Late in the evening of October 28, we add, it became known about the new statement by John Kerry regarding the positions of Russia and the USA on Syria.

"Russia, the United States and other countries really have a lot in common in approaches to Syria", - quotes Kerry RIA News". According to the Secretary of State, "we all agree to hold close discussions, we agree on the need to find a political solution."

Mr. Kerry also noted that "we agree on the need to achieve victory over the" Islamic State "or any other terrorist group."

Among the points of contact between the United States and the Russian Federation, Kerry called "the need for refugees to return home" and the fact that "the Syrian people have the right to elect their leaders during fair elections."

Mr. Kerry, of course, didn’t say that the Syrian people had chosen Bashar Assad not so long ago during fair elections. And he will be elected in the event that early elections are initiated in Syria. Kerry's statement is an attempt to preserve the political face of the United States in front of the Arabs, who turned to Putin in unison. Russia has become a new force in the region, and we have to reckon with it.

Observed and commented on Oleg Chuvakin
- especially for topwar.ru
Ctrl Enter
Noticed oshЫbku Highlight text and press. Ctrl + Enter
We are
Situational analysis of the death of the MH17 flight (Malaysian Boeing 777), made on the basis of engineering analysis from 15.08.2014Results of the week. “In our cooperative, the board is always agreed”
Military Reviewin Yandex News
Military Reviewin Google News
28 comments
Information
Dear reader, to leave comments on the publication, you must to register.