In the US, thinking about the disappearing drone

October 29 2015
25
The United States Agency for Advanced Defense Research and Development (DARPA) continues to delight all science fiction fans from around the world. In October, 2015 reported that the agency announced a competition to co-finance the development of a completely new type of unmanned aerial vehicles (UAVs), which, after successfully completing the assigned combat mission, should be dissolved in the literal sense of the word. That is, to physically cease to exist, regardless of the conditions and properties of the environment. Moreover, drones should disappear without a trace, which at least in some way could be identified in the future.


In the technical assignment, which was published by the DARPA agency, it is directly indicated that the disappearance of the unmanned vehicle does not at all mean its return to the initial launch point, which could indicate to the enemy the location of the sender of the drone, or the use of various camouflage options. Moreover, according to the conditions for the destruction of a new drone can not use harmful chemicals or potent acids, as they can pose a real danger to the military. The possibility of using various explosives is also completely excluded, since an explosion will almost certainly violate the masked position or lead to the failure of the entire operation. That is, the UAV should disappear without attracting anyone's attention.

The new project received the sonorous name ICARUS (Inbound, Controlled, Air ‐ Releasable, Unrecoverable Systems, stands for “Incoming Controlled Air Unrecoverable Systems”). It is worth noting that in DARPA definitely love ancient Greek heroes. ICARUS is also a tribute to the myth of Icarus, whose wings burned when it flew up to the sun. This program is also based on the developments that were obtained as a result of conducting research within another project - Vanishing Programmable Resources (endangered programmable resources). The goal of this project was to develop electronic circuits that would have the possibility of physical extinction, after receiving the appropriate command, in order not to be in the hands of the enemy. 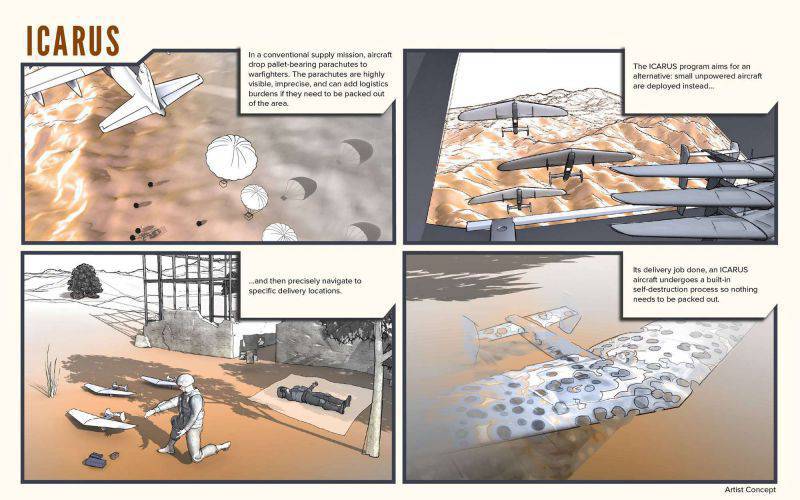 In accordance with the ICARUS program, for 2,5 of the year in the USA it is planned to create a whole line of ghost drone, which are likely to be used by the special forces of the American army. At the same time, there is very little information about drones being developed. So far, only one aircraft has been known, whose carrying capacity will not exceed 1,4 kg. This UAV will have to get the ability to carry over the air and dump loads weighing up to 1,4 kg exactly at the target with a maximum deviation of 9,7 meters. In this case, the drone should be able to fly a distance of 150 kilometers and at an altitude of 10 700 meters. After the cargo is delivered to the site, the unmanned vehicle will have to disappear within 4 hours in the daytime or within 30 minutes after civil twilight - the brightest part of the twilight, which lasts from the moment of the visible sunset beyond the horizon line. until the center of the sun goes below the horizon 6 degrees.

Curiously, one of the most important parts for the new UAV is actually ready. This is a microcircuit, which is able to self-destruct after the appropriate command. Under the DARPA contract, BAE Systems and IBM have been working on it for almost two years. At the same time, the amounts of contracts concluded with these two companies are rather modest. So the American company requested 3,4 a million dollars for work, and the British 4,5 a million dollars requested. At the same time, how exactly the process of self-destruction of chips will be carried out is not known for certain. But this process begins with the destruction of the glass substrate of the chip, with the result that the semiconductor chip turns into silicon dust, noted in the agency DARPA.

However, the main secret at the moment remains the appointment of these ghostless drones. What kind of combat mission they will have to solve, and why it is so important to physically destroy the drone after its implementation, is not yet known. At the same time, such secrecy is understandable. Since practically all large and loud operations of the American special forces - the attempt to capture General Aidid in Somalia or the storming of Bin Laden’s residence in the suburb of Abbottabad was always accompanied by losses of various military equipment, including non-combat ones, which definitely indicated the attacking units. In addition, the need for such unmanned aerial vehicles may be explained by the Pentagon’s reluctance to allow modern electronics, which are literally stuffed with UAVs, into the hands of the enemy. 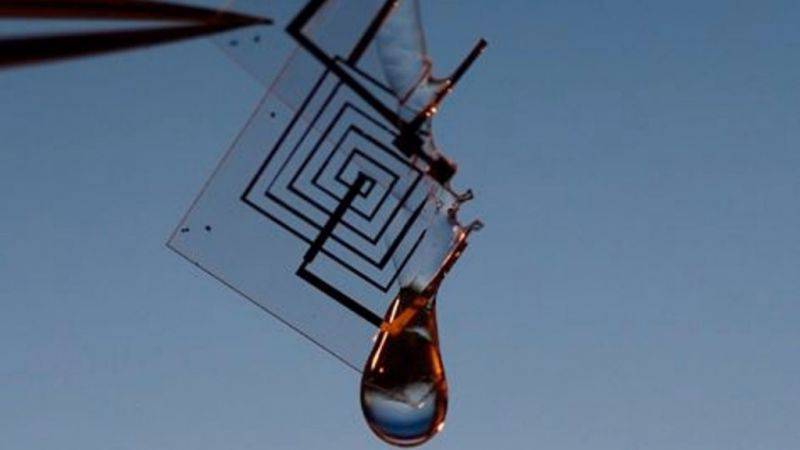 The ICARUS project is scheduled to be completed within 26 months after a contract is signed with an American defense company that can win the Pentagon tender. It is worth noting that earlier there appeared information in the media that the plans of the American military command also included the creation of a system for overcoming enemy air defense systems with the help of UAVs. In addition, in April 2015, the head of the US Navy spoke about the intention to completely abandon the use of manned fighter aircraft in the future, replacing them with drones.