"Messerschmitt" in service with the Israel Defense Forces

November 2 2015
39
On May 29, 1948, Palestinian Jews were able to assemble the first four Czech fighter-bomber Avia S-199. This aircraft was a post-war modification of the German fighter Messerschmitt Bf.109. Surprisingly, to protect the Jewish population from the Arabs, an airplane was purchased, which was the personification of the military power of Nazi Germany. The planes were in the Holy Land as a result of an agreement that was reached between Israel, Czechoslovakia and the USSR. At that time, the young Jewish state felt an urgent need for its own air force, but they had only a few dozen training, communications and transport aircraft at their disposal. The supply of military aircraft from Czechoslovakia was supposed to withdraw Aviation Israel to a new level.


For various political reasons, it was the Czechoslovak government that, with the approval of the Soviet Union, decided to support the formation of the State of Israel and sell weapons to this country in order to reduce Britain’s influence in the Middle East. In April, 1948, Hagana’s arms purchasing agent Otto Felix announced that Skoda was ready to sell Avia S-25 199 fighters. The Haganah is a Zionist Jewish military underground organization that existed in Palestine from 1920 to 1948 during the British Mandate. The organization was banned by the British authorities, which, however, did not prevent the Hagane from organizing a fairly effective defense of Jewish settlements. With the formation of the State of Israel, this organization became the basis of the Israel Defense Forces.

Already on 23 on April 1948, the envoys of the Hagany arrived in Czechoslovakia, where they entered into an agreement with the country's government on the supply of weapons, including Avia S-10 fighter jets with bombs and ammunition. For ten fighters, Israel paid 199 a million dollars, that is, for 1,8 180 dollars for a plane - a huge sum for those times. For example, one of the best American fighter of those years, the P-000 "Mustang" cost 51 a thousand dollars, that is, more than 51 times cheaper. A month later, the 3,5 in May 20, the Israelis additionally acquired another 1948 Czech fighter S-15. 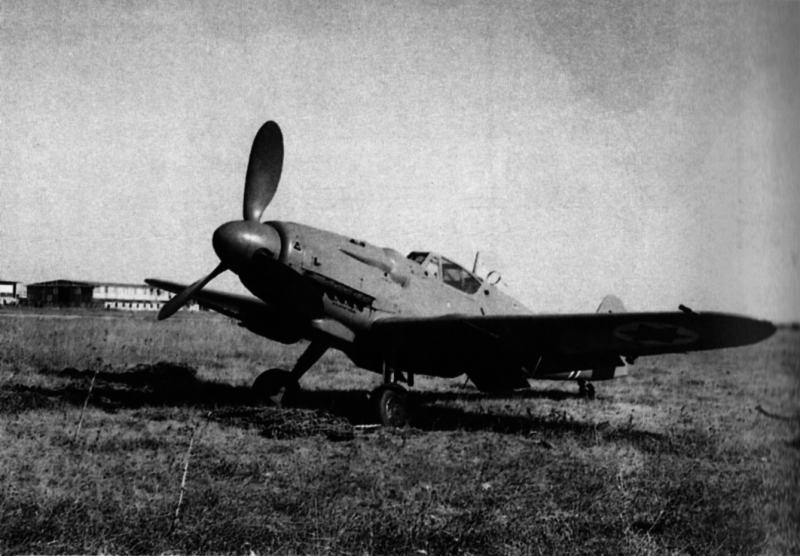 It is worth noting that история The Israeli Air Force began even before 1948. So in the 1930-ies in Palestine, a flight school called Avron was opened. Graduates of this flight school took part in the Second World War on the side of Great Britain. And on November 10, 1947 of the year, in the then-illegal Jewish army, appeared its own air service, Sherut Avir. However, the Israeli Air Force became a real military force only after the acquisition of Messerschmitt fighter planes of the Czech post-war production in the S-25 version.

To deliver these planes to Israel, they were taken apart and loaded into C-46 “Commando” and C-54 “Skymaster” transport aircraft. After a long flight, they landed at the Israeli Ekron airbase. Upon arrival at the scene, the combat aircraft were assembled by Czech mechanics, who were simultaneously engaged in the process of training the Jews, the ground staff of the base. In Israel, the planes delivered from Czechoslovakia received the designation "Sakin" (Hebrew - knife). It is curious that the word messer is also translated from German.

The circumstances were such that, just a day after the first four fighters were assembled in Israel, Egyptian troops came close to Tel Aviv. David Ben-Gurion, who served as Israeli Prime Minister, decided to send in support of the Givati ​​infantry brigade, which was fighting in this direction, literally the newly created Israeli aircraft - all 4 aircraft that became the 101 Fighter Squadron. Each of the S-199 aircraft that went on a mission carried two bombs weighing 70 kilograms each. The bombs were dropped on a cluster of Egyptian vehicles near Ashdod. After the bombing was completed, the fighters carried out an attack on the Egyptian troops, firing at them from cannons and machine guns. 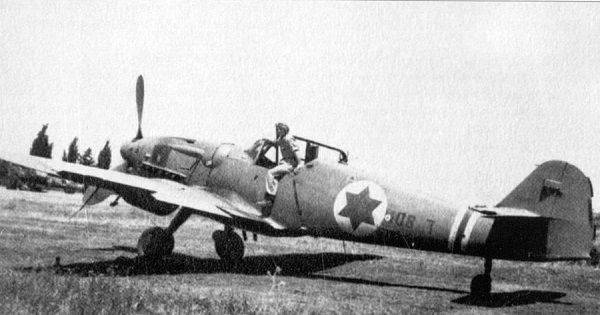 Two planes did not return from the first combat sortie, they were hit by Egyptian air defense ground forces, but the Egyptian units also stopped the offensive when they saw that the Jews had their own combat airplanes. In fact, the defenseless Tel Aviv was not abandoned and captured by Egyptian units only because of the psychological effect of a single air attack. The next day, the two remaining “Sakina” took part in striking the Jordanian army near the city of Tulkarm - on this section of the front, the Jordanians sought to break through to the city of Netanya. 20 armored personnel carriers with infantry support were at the disposal of Jordanian units. These Arab units were confronted by the extremely small Israeli Alexandroni Brigade. Israeli S-199 fighters dropped bombs on the railway station, to which the enemy troops arrived. In this fight, the Jews lost another combat aircraft, which suffered from the fragments of their own bombs, the fighter crashed into the sea. The last of the remaining “Sakins” in the ranks took off again the next morning, on June 1, he bombed the fortress of Latrun, which was occupied by the Arabs.

Israeli pilots won their first air victory on 3 June 1948. On that day, Colonel Mordechai Alon, controlling the last S-199 from among the first fours assembled, shot down two D-COTA C-47 transport aircraft of the Egyptians, which were converted into bombers, over Tel Aviv. The first “Dakota” Mordechai Alon shot down over the city of Rishon-le-Zion near Tel Aviv, and the second when he tried to get out of the battle over the Mediterranean Sea. After this air battle, Egyptian aircraft never dared to make daytime raids on Israel.

Thus, the first four fighters S-199 played a very important role in the war for the independence of Israel. It is unknown in whose direction the balance would have swung if the planes had not arrived in Palestine before the Egyptian units launched an offensive against Tel Aviv. However, the Arabs themselves, who on 19 on April 1948 of the year, bombed the bus station in Tel Aviv, were indirectly responsible for the Israeli haste, and the 42 man died as a result of the raid. Upon learning of this bombardment, the Israelis and foreign volunteers, who were then in Czechoslovakia, did everything possible to send combat vehicles to Palestine as quickly as possible. 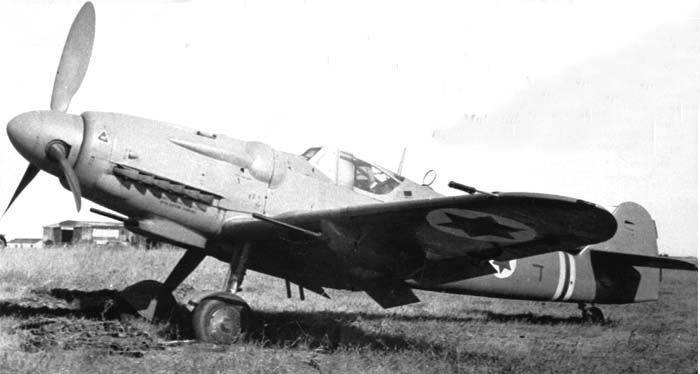 By 9 July 1948, the Israeli Air Force 101 Fighter Squadron again reached the 4's aircraft, after which it was sent to attack the Egyptian positions in the Gaza Strip. Then the 3 aircraft returned from the battlefield. On July 10, two Teksan AT-6 Syrian aircraft bombed Israeli positions north of Tel Aviv. These were training aircraft that the Syrians converted into bombers, similar to the Egyptian Dakota. The return air battle between the two “Sakins” and the two “Texans” ended in a draw 1: 1. With the same result, the 18 air battle of July between the “Sakin” link, just arrived from Czechoslovakia, and Egyptian aviation ended.

And in early August, 1948 between the warring parties, a truce was concluded, which lasted two months. During this time, Israel has managed to complete deliveries of fighters S-199, as well as to replenish their air force with combat aircraft from other countries. This fact, as well as frequent breakdowns of Arab aircraft, led to the fact that at the end of the truce, Israel continued to conduct combat operations, having relative parity with the enemy in the air. A year later, 20 August 1949, the war for the independence of Israel ended in victory for the Jewish side.

From 25, the Messerschmitts, which were to be supplied under an agreement between Czechoslovakia and Israel, managed to ship only 22 machines to Palestine. One of the transport aircraft that was transporting fighters crashed during an attempt to land at the Sde Dov alternate aerodrome during a sandstorm, where it was mistakenly fired from anti-aircraft gunners from the ground. The second transport aircraft during its flight to Israel for technical reasons was forced to land in Athens, where its cargo was arrested by the military. 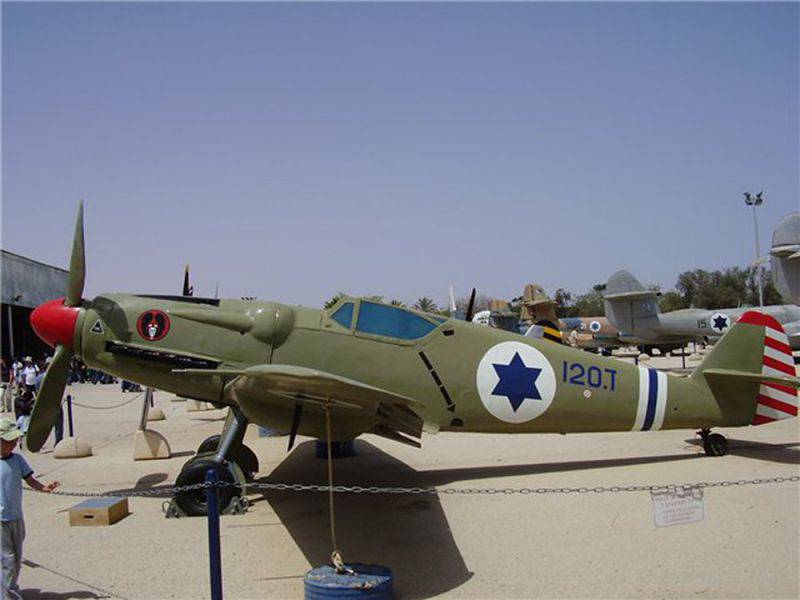 Fighter Bf-109 or as it is also called Me-109 (by the name of the designer) was produced throughout the Second World War. In addition to Germany (from 1936 to 1945 year), it was produced in Hungary, Romania and Spain. In total, more than 33 thousands of aircraft were assembled, including the 30 573 fighter in Germany itself. Thus, Messerschmitt became one of the most massive combat aircraft in the history of aviation, second only to the Il-2 attack aircraft. The most common modification was the fighter Bf-109G (Gustav).

In May, the 1945 of the year, after Germany capitulated, remained in Czechoslovakia details that were enough to create more than 500 Bf-109 aircraft of various modifications. Therefore, the Czechoslovak government decided to establish the production of these aircraft. It was planned to build a single model fighter Bf-109G-14 and double - Bf-109G-12. Their release was to deal with the Czech companies Avia and Letov. In the Czechoslovak Air Force, the planes were originally to receive the designations S-99 and CS-99, respectively. 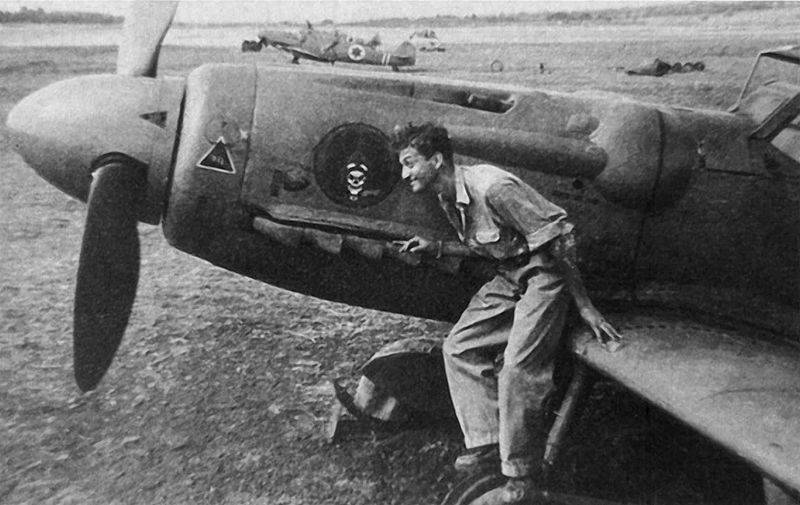 But by the year 1947 managed to build the entire 20 fighter S-99 and 2 CS-99. The reason for such a small release was the terrible force of the explosion that occurred at the sugar refining plants in Krasna Brest in September 1945 (there was a version that the explosion was a diversion of Sudeten Germans from the Werolf organization). This explosion also destroyed ammunition depots located nearby, which among other things contained almost all the Daimler-Benz DB605 aircraft engines for Messerschmitt fighters available at that time in Czechoslovakia. The way out was found by installing on the Bf-109 fighter jets other German engines available in the country - Junkers Jumo-211F with a metal screw VS11. Initially, these engines were intended for He-111H bombers.

In addition to excessively high weight and low power, the aircraft engine Junkers Jumo-211F had another drawback - due to the large-diameter propeller, which was not optimal, uncompensated torque was created during the flight of the aircraft, and the fighter pilot had to constantly make tangible efforts to eliminate it. For this reason, the S-199 fighter was difficult to fly and kept the pilot in constant tension during the flight.

The armament of a Czechoslovak-made fighter consisted of two synchronous (i.e. shooting through the propeller disk) 13,1-mm MG-131 machine guns, which were located under the hood of the car, as well as two MG-20 automatic guns located in the wing gondolas. It is worth noting that on the original Bf-151G-109 fighter jets, in addition to the two MG-14 machine guns, there was also one 131-mm MG-20 or 151-mm 30 gun, which fired two under-wing gondolas on the plane with MG-108 guns was originally planned.

Ctrl Enter
Noticed oshЫbku Highlight text and press. Ctrl + Enter
We are
An-12 in AfghanistanFighter Bf 109 "Messerschmitt" - the most massive fighter in history
Military Reviewin Yandex News
Military Reviewin Google News
39 comments
Information
Dear reader, to leave comments on the publication, you must to register.