Once again on the issue of reconstructing the weapons of the era of the Trojan War. Warriors in armor and helmets (part 12)

November 6 2015
121
Referring to the topic of reconstruction of weapons of warriors of bronze, it is easy to see that ... here historians and reenactors, one might say, were very fortunate that the people of that time were pagans and put everything that surrounded them in this world into their graves. Here are the Christian knights buried dressed in a shroud, and what can we say about what they had weapons in the relatively early Middle Ages? Kolchugs broke, swords re-crafted into new, modern designs, and we have to use only miniatures and effects. From later times, the armor itself, and their images on miniatures and the same effigies and brasses (planar engravings on copper and brass) that confirm each other, but with the early Middle Ages, have reached us.


But the bronze age is much easier to reconstruct. There are a lot of finds, and their degree of preservation is very high. And besides, there are many iconographic monuments. And it helps to reconstruct the appearance of the warriors of that era, first to artists, and then to “applied craftsmen.” 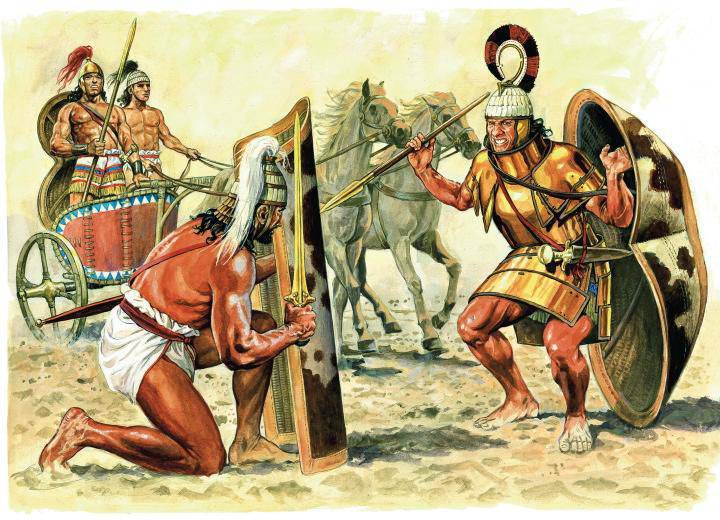 For example, the drawing by artist Giuseppe Rava "Duel of the Achaean and Trojan Warriors". One may argue about the fact that they could not be barefoot (“the sand burns”), although the Maasai warriors, the Bushmen in the Kalahari Desert, and the Dayak “headhunters” in Borneo walk around and barely manage, somehow cost. But everything else is what is, what we see and what you can hold on to. Swords, like what the warrior keeps on the left, are found all over Europe, from Ireland to Bulgaria, and further on in Palestine, Syria and Egypt. Helmets on their heads were found. Their images are found. Images of shields - are available. There is also armor (as many as three!), Like what the warrior wears on the right. 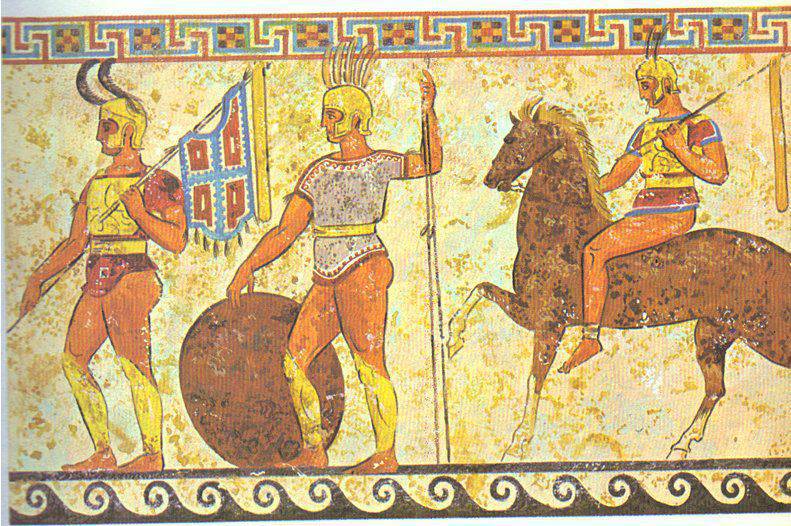 Bronze armor is also clearly visible in the Samnite warriors from Paestum in Lucania. It is believed that this mural can be dated IV. BC. On the warriors muscular cuirass, helmets with shoulder pads and back pads, leggings. The helmets are decorated with feathers, the shield is round, the rider has no saddle, no stirrups, no shoes, but he wears a bracelet on the ankle. The average warrior on the spears of the loop - therefore, they were used for throwing. 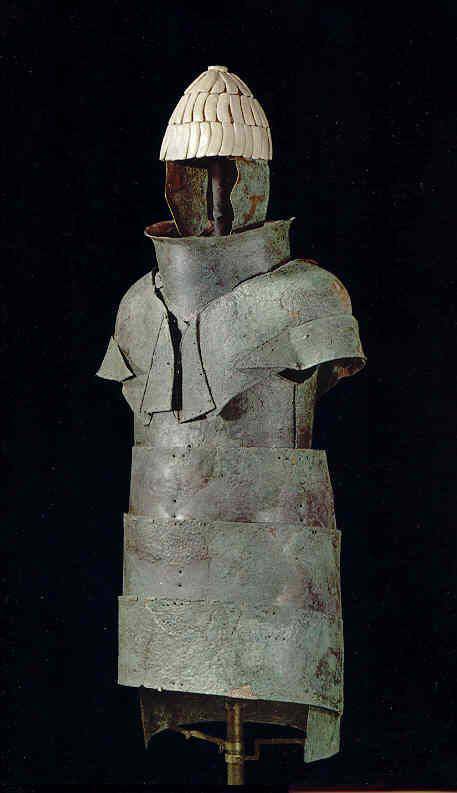 Therefore, when the Greek restorer of armor and armament Katsikis Dimitrios decided to repeat this armor, he had no particular problems. It was enough to go to the Nafplion Museum ...

As a result, he had two impressive Mycenaean "warriors" in ancient armor. Alone in the "armor of Dendra." Another in the typical armament of the "peoples of the sea." And both of these sets are very similar to the later knight armor. However, there is nothing surprising here. Anatomically, people have not changed. Two hands, two legs, neck ... and how to protect all this to the maximum? The only way! 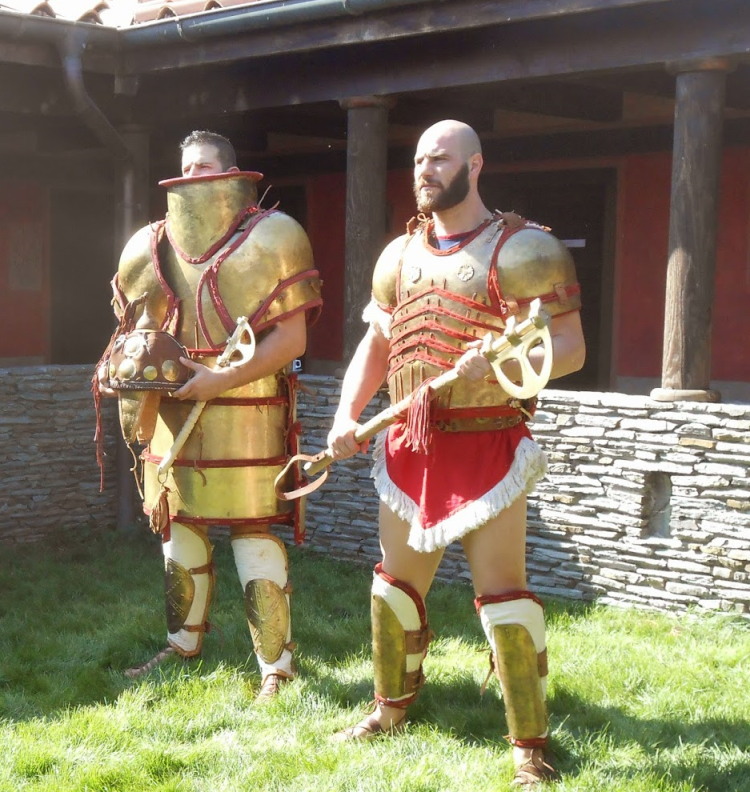 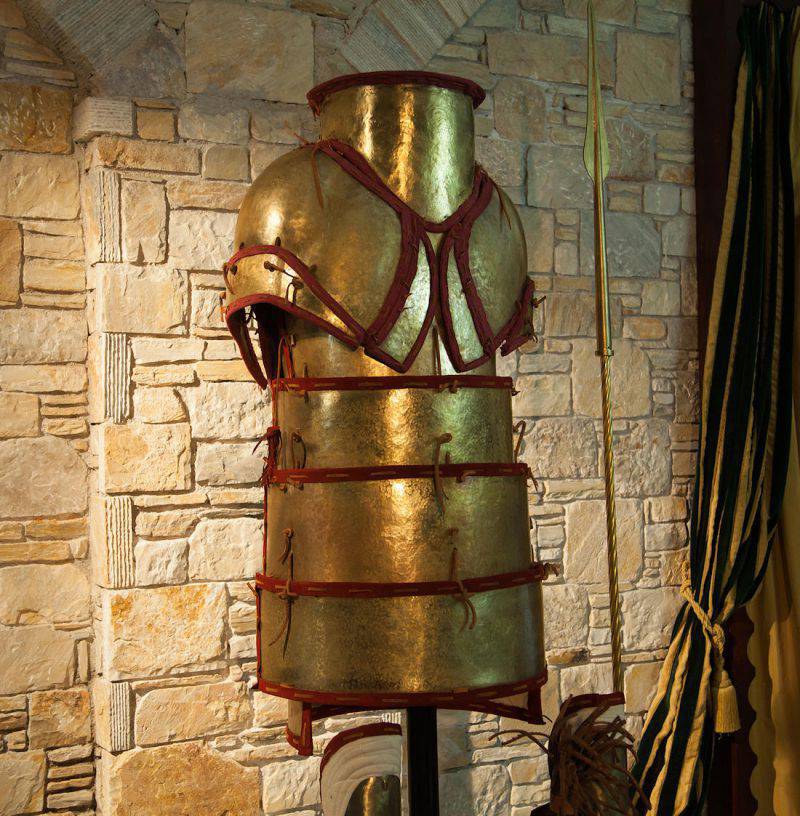 But he didn’t make his helmet for “armor from Dendra” to make their boar tusks, but he made them from leather and covered it with bronze badges. He himself writes about this helmet like this: “This is a complex helmet with a conical cross-section. The helmet consists of a bronze rim in the shape of a dome, on which a shell of organic materials is firmly fixed. The shell is made of linen fabric and covered with leather on top. Above this organic dome, eleven bronze disks of various diameters are symmetrically located. 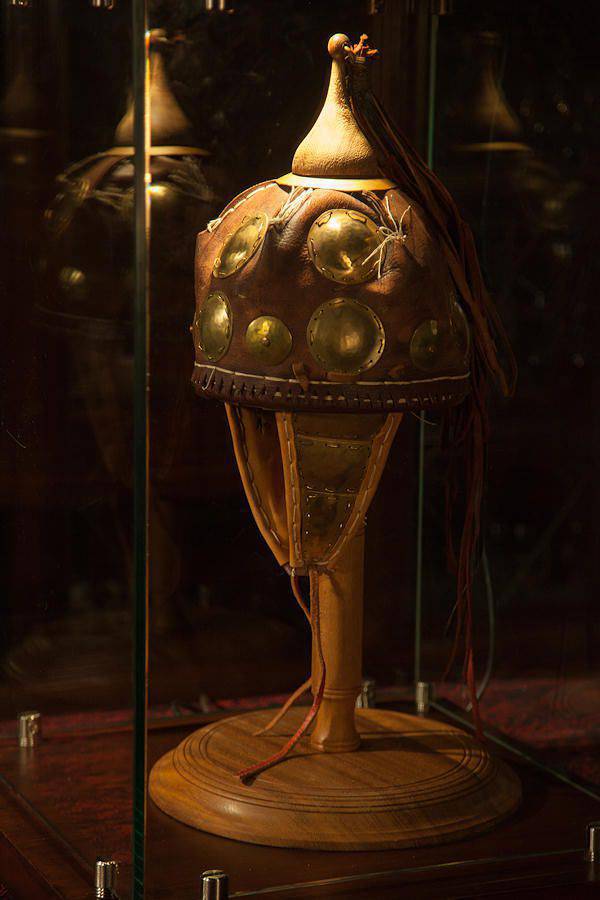 Leather helmet to "Armor of Dendra."

At the top of the helmet is a tapered wooden bush for the horse's tail. Inside the helmet has a thick woolen lining for better fixation on the head, and to effectively dampen the force of the blows. In such helmets, their strength and protective abilities are striking, despite the fact that there is no uniform metal sheath on them. ” 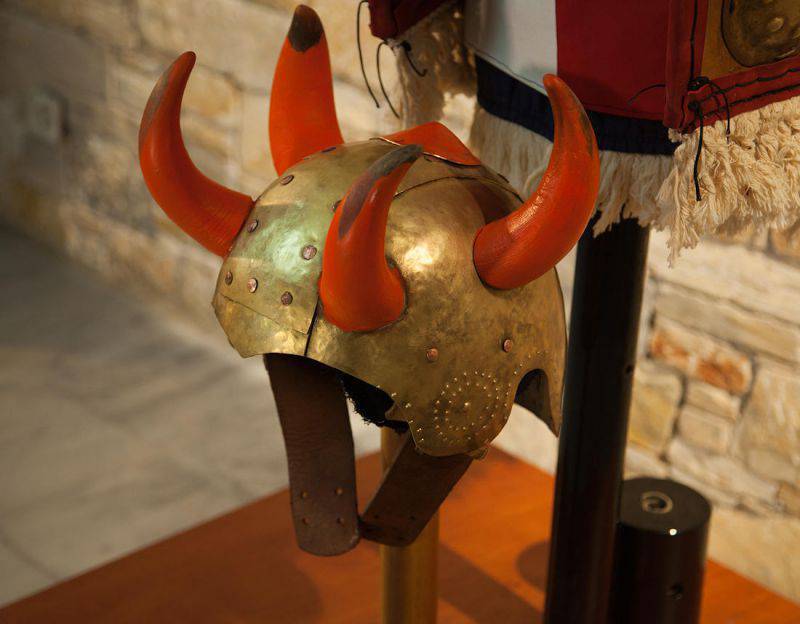 “Helmet Menelaus” is simpler and consists of three bronze plates connected on rivets. Four horns - painted wood. They give it an awesome appearance, but, like knightly “horns,” were fixed insecurely so that the blow struck on them could not be transmitted to the cervical vertebrae.

Interestingly, no less interesting armor and helmets are made on the other side of the planet, namely in the USA. Among the reenactors there should be Matt Poitras, from Austin, Texas. He is engaged in the reconstruction of the armor 16 years. Among his diverse works is the theme of the Trojan War.
Here, for example, as he, in accordance with the description in the Iliad, recreated Odyssey's helmet from boar tusks. The base of the helmet is tied with leather straps at the top. Above it are fangs, drilled and sewn between themselves "shoemaker drag". Bronze nashechniki and nazatylnik with fur lining. 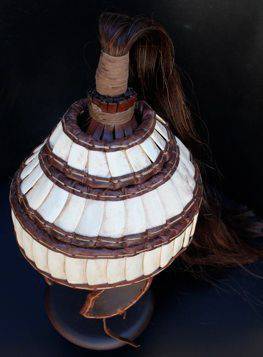 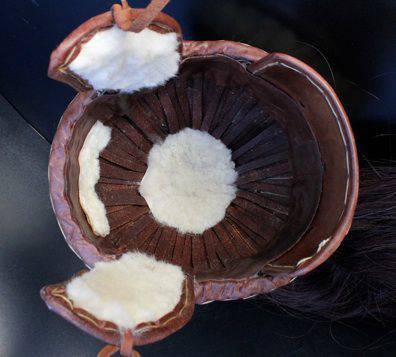 And so from the inside 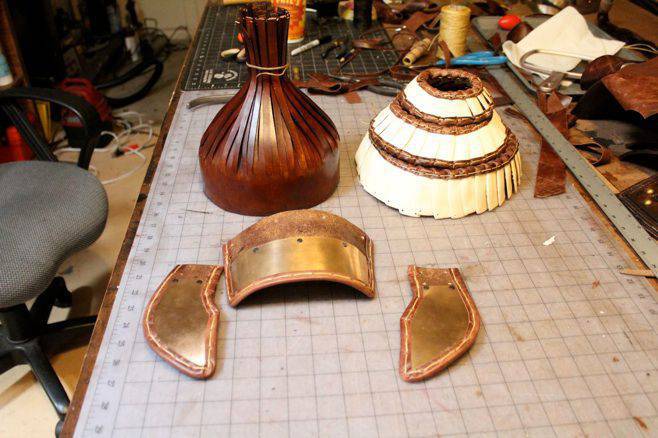 Well, these are all parts of it. 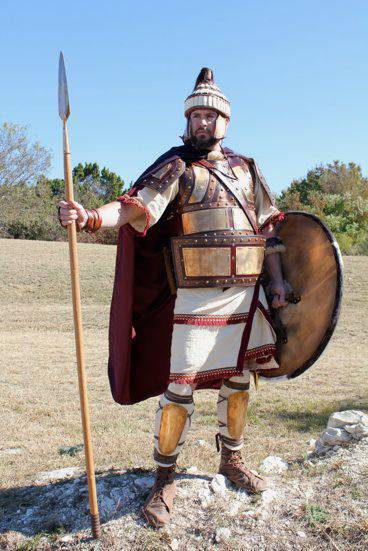 He dressed the most cunning Odyssey in leather armor with metal plates sewn on them and armed him with a spear, a sword, and supplied him with a shield of a characteristic form. 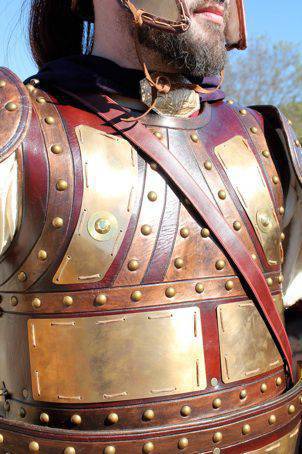 This photo clearly shows the thickness of the skin of this armor, and how the bronze plates are sewn onto the skin.

The sword with the bone handle of Matt is in the sheath, trimmed with fur. 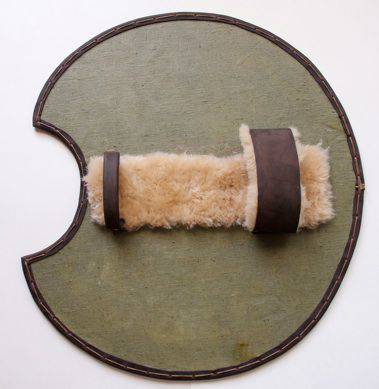 And we see the same fur lining for the hand on his shield. 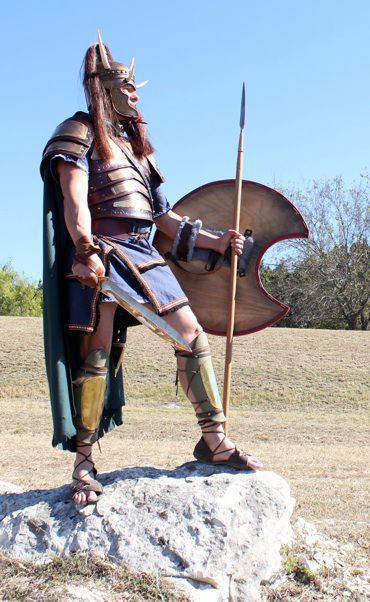 With this shield, Matt supplied his “Achilles”, which he wore in equally solid armor and also in a “grivasty” Achaean helmet with horns. The breastplate of his is made according to the type of the "peoples of the sea". Here he especially did not fantasize, unlike the reconstruction of Odyssey's armor. 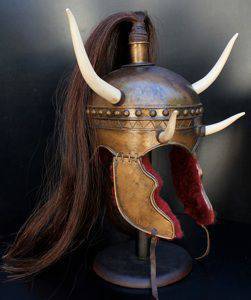 The maned and horned "helmet of Achilles" on the device is very simple. It is a bronze hemisphere elongated in the shape of a skull with a riveted plate of a crown and naschechnikami on the loops. Horns, of course, although "scary", but also "toy", for beauty. 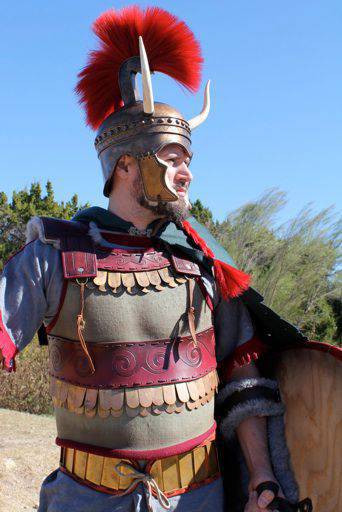 According to Matt, the armor of that era was multi-layered and it is difficult to argue against that, because it’s clear that two or three layers of skin protect better than one, and not so much is added in weight.

As for helmets, they could be made both by casting and forging and also in mixed technology. So, even in Soviet times, a helmet was found in Central Asia, which was cast entirely in bronze and with walls 3 mm thick. It was noted that it is heavy, but its protective properties are exceptionally high. The same could make and Mycenae gunsmiths, and even decorate his head with a horse tail is so obvious that it is clear without Homer, that it could well be so!

It should be noted here that Matt’s armor was shot several times in the cinema, although the accuracy of the reconstruction (and above all the material and weight!) In this case did not play any role. The main thing is the appearance, and what is done of what is the tenth thing!

And here, by the way, it remains only to regret that he did not dress the participants of the most famous film about the Trojan War - “Troy” with Brad Pitt in the title role. I will not talk about the movie itself - the critics have already dealt with it and have expressed their opinions as a work of cinema. But with regard to the armor, it should be noted that they are not at all historical, and why this is so unknown. After all, the creators of "Troy" had two completely win-win options: the first was to make a film with costumes depicted on Greek vases, that is, the 6th - 5th centuries. BC. It would not be historical either, but for many it is recognizable and familiar. The second is to use costumes in the style of the same Matt Poitras, known for vases and frescoes of the Mycenaean era - with characteristic horns, and all the rest, which, by the way, could have been very effective. For example, making a helmet for the same Odyssey.

The third option was chosen, however. A kind of hybrid has been created with an incomprehensible abundance of fine details that are completely uncharacteristic for that era. Somewhere on another planet ... that would be just right, but not on Earth at any time that we know well enough. Moreover, it is unclear from what material they are all made, because on the screen they are almost all black! The only time when the armor at Achilles looks like copper is a short scene on the ship just before disembarking on the land of Troas. True, in separate episodes the shields laid out by the “copper” flash, but there are few of them, even though polished copper would have to shine there completely. 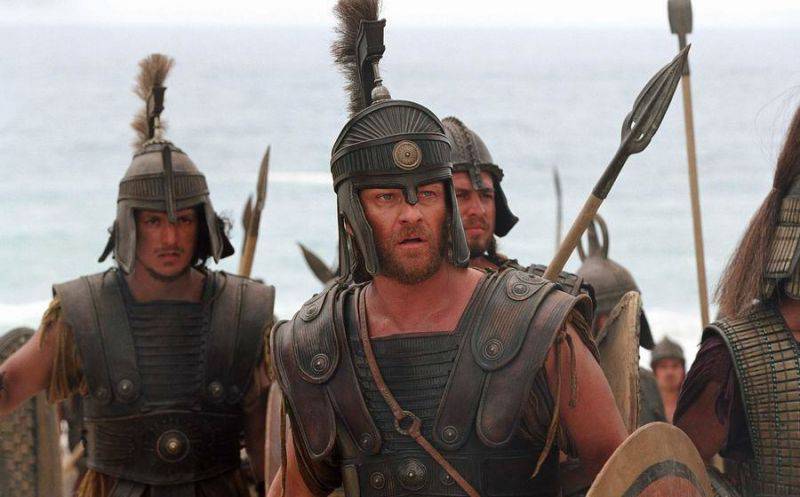 Shot from the movie "Troy". What is it, why, and from what? Why so many small and completely unnecessary parts? Raise the price for the manufacture of armor? It's already clear that the "fairy tale", but still it is necessary and the measure to know.

After all, copper and bronze armor was customarily brushed so that they shine. "Helmet Helicopter" is what Homer is talking about! And here both helmets, and armor, and shields (the latter at least somehow resemble ancient samples, and that is not all!), All are for some reason black. And the Greeks and Trojans! The main color is dark, no gloss. But, for example, armor and shields in the Italian film "The Feats of Hercules" (1958). Let it be a fairy tale, but ... it looks more real than the "fairy tale" about Troy, shot in 2004, with very different possibilities. And ... the most important thing is that the actors still need something to wear, so why not just put them on right away?

Shot from the movie "Troy". The armor of Achilles was clean, but for some reason forgotten to yourself?

The author is grateful to Katsikis Dimitrios (http://www.hellenicarmors.gr) and Matt Poitras for the opportunity to use their photos of armor (http://www.mpfilmcraft.com/mpfilmcraft/Home.html), as well as the Greek association Korivantes »(Koryvantes.org), which provided photographs of their reconstructions.

Ctrl Enter
Noticed oshЫbku Highlight text and press. Ctrl + Enter
We are
Once again to the question of the reconstruction of the armor of the era of the Trojan War. Warriors with Shields (part 11)Weapons and armor of soldiers of the Trojan War. Swords and daggers (part one)
Military Reviewin Yandex News
Military Reviewin Google News
121 comment
Information
Dear reader, to leave comments on the publication, you must to register.