BAM: the cost of building a century

October 31 2015
17
The Baikal-Amur Mainline (BAM) is the second Russian railway exit to the Pacific along with the Trans-Siberian Railway. The most important economic and geopolitical object.


On 4300 kilometers from Taishet to Sovetskaya Gavan, BAM crosses 11 major rivers, 7 mountain ranges, connects more than 60 cities and towns. On BAM 2230 bridges, 8 tunnels, including the largest in Russia - Severomuysky. 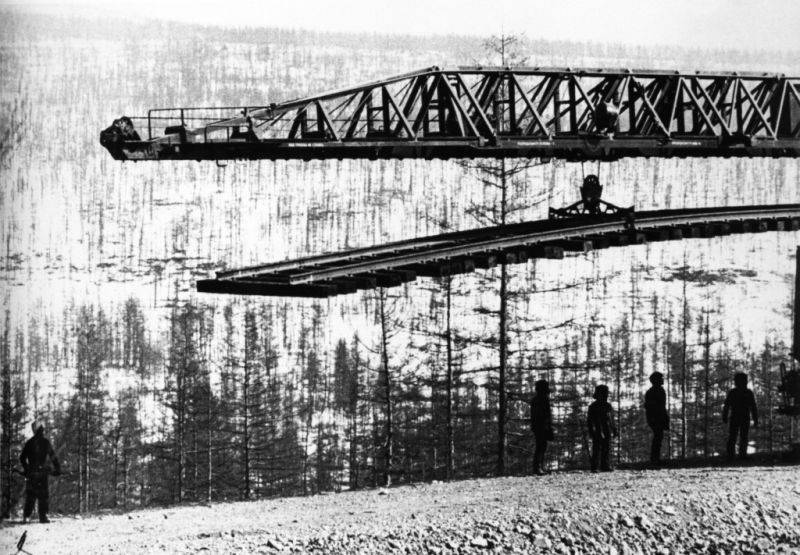 Justice stories: The 40 anniversary of the Baikal-Amur Mainline was celebrated on April 2014. Moreover, the strict chronicle has not been forgotten, and she says that the country has risen to BAM several times.

The first is before Transsib, before the start of the main road of the country. In the 1889 year, choosing the path, Colonel General Staff Nikolai Voloshinov pushed through the taiga where the BAM rails now lie, concluded: “Impossible”. While it is impossible, because Transsib was needed very urgently. Like all of us. “Yesterday!” Is the most popular answer to the question: “When should I do it?”.

The history of the two highways is parallel, as they themselves, and, a little distracted from today's birthday, using the example of Transsib, let's see what it is - urgency in Russia ...

Russian Far East kept on the word of honor. Alexander III writes on the report fields of the Irkutsk Governor-General:

“I must confess with sadness and shame that so far the government has done almost nothing to meet the needs of this rich but neglected land. And it's time, it's time. ” (This is “with shame ... it's time for a while” - rather, it is a fact of conscience of the great king who was underestimated in our country. In fact, Russia just “concentrated”, having consolidated resources, approached the possibility of a great leap into Asia.) 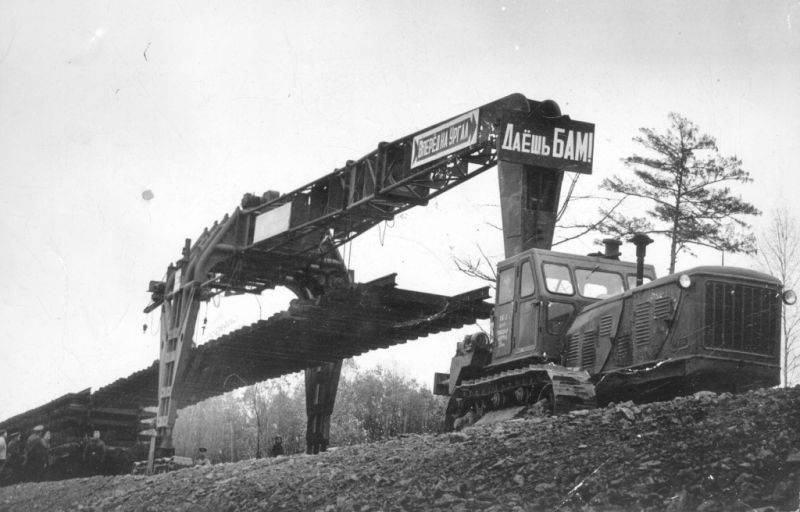 The 17 March 1891 Rescript of the Year: “I now order to begin the construction of a continuous railway across Siberia, which has to connect the abundant gifts of nature of the Siberian regions with a network of internal communications.” Incredible work, sometimes ingenious impromptu, the longest railway in the world built in 23 year.

They straightened up somewhere: when a long arc is cut through the Russian mountains, and the country's largest bridge over the Amur is still being built in Khabarovsk
(finished in 1916!), they allowed the CEL - at 514 it is shorter, through the Manchurian steppes.

Somewhere and completely shook the world. The famous Circum-Baikal Railway, one of the most difficult routes on Earth, only bypasses Baikal from the south through the rocks (that's why Colonel Voloshinov considered the “Bamovsky” option: bypass Baikal from the north), and, while breaking through the tunnel behind the tunnel, they came up with a rail… on the Baikal ice (in the summer - the ferry).

Vladimir Nabokov recalled how “photo postcards” with trains going on ice were perceived in Europe as fantasy paintings.

However, the pass-through path to Vladivostok is open, and on July 1 on 1903, even before all the celebrations, cutting the ribbons, the transfer of troops began under the guise of tests. And the first Japanese shot: January 26 1904, in less than five months. The transfer of one army corps with weapons took a month.

Much bitter was said about that war, but neither the railroad workers nor the Baikal ice did not let down then.

In 1926, they returned to BAM, conducting their first reconnaissance. The route is still with another abbreviation, the decree 1932 of the year: “On the construction of the Baikal-Amur railway”. The final destination is the Perm harbor on the Amur (the future Komsomolsk-on-Amur). No less remarkable is the end point in the chronological sense: November 1 1945 of the year! The scheduled launch date for BAM launched in 1938 ...

And with the same eternal urgency in 1942, the rails and bridge trusses were torn off from the finished section of Bam-Tynda. They became the Volga Road: the railway line Ulyanovsk - Saratov - Stalingrad was the main transport for the victory, which turned the history of the world.

It is true that in the 1930 – 1950-s, BAM was built by Bamlag, then divided into 6 organizations of the same affiliation - the Main Directorate of Railway Construction Camps (GULZhDS) of the USSR Ministry of Internal Affairs. In 1935 there were 162 390 prisoners at the construction site, 2405 civilians and 6534 paramilitary security officer (of which 3874 are also prisoners). 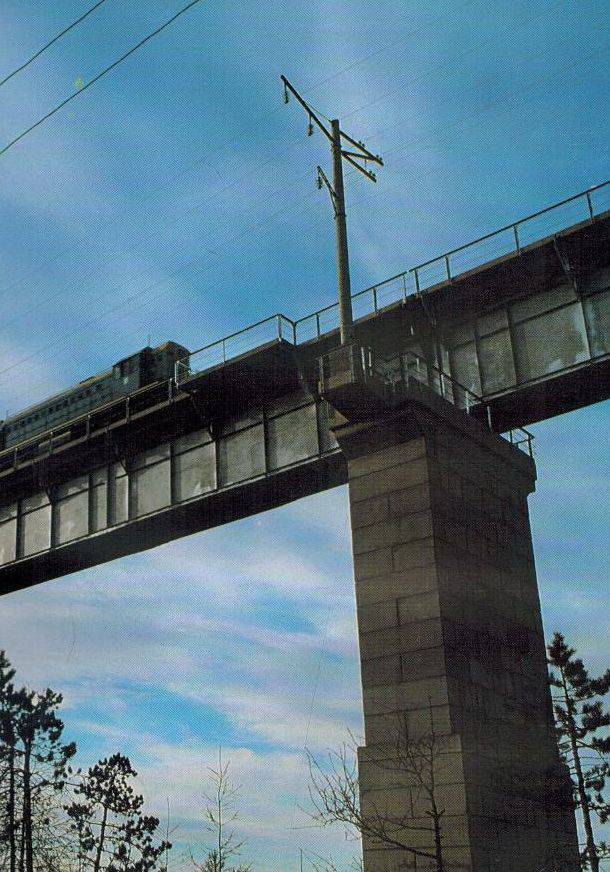 It was delivered, mainly in temporary operation, a third of the highway - 1132 km. Partially developed adjacent territory. In 1953, these construction projects were closed. The life of BAM stopped for a decade.
Well, then it's time for a new start. New economic, military-political conditions in 1960-s made BAM the most important goal of the USSR. Half of the increase in freight turnover is in the Far East of the country.
World economic leadership passes to the countries of the Pacific coast, access to which (our main historical achievement) kept on one line of Transsib, sometimes passing a kilometer from the border. Geological intelligence reports about the riches of the region that are unique even for Siberia. BAM is declared building of the century.
Extreme conditions of the route dictated revolutionary scientific and technical solutions in tunneling, technologies for filling the roadbed and drilling and blasting operations in permafrost. A fundamentally new design of the bridge support foundations has been developed. In September, the Scientific Council of the USSR Academy of Sciences on BAM problems was established on 1974. By highway treated as a construction site of the century. But that's another story. 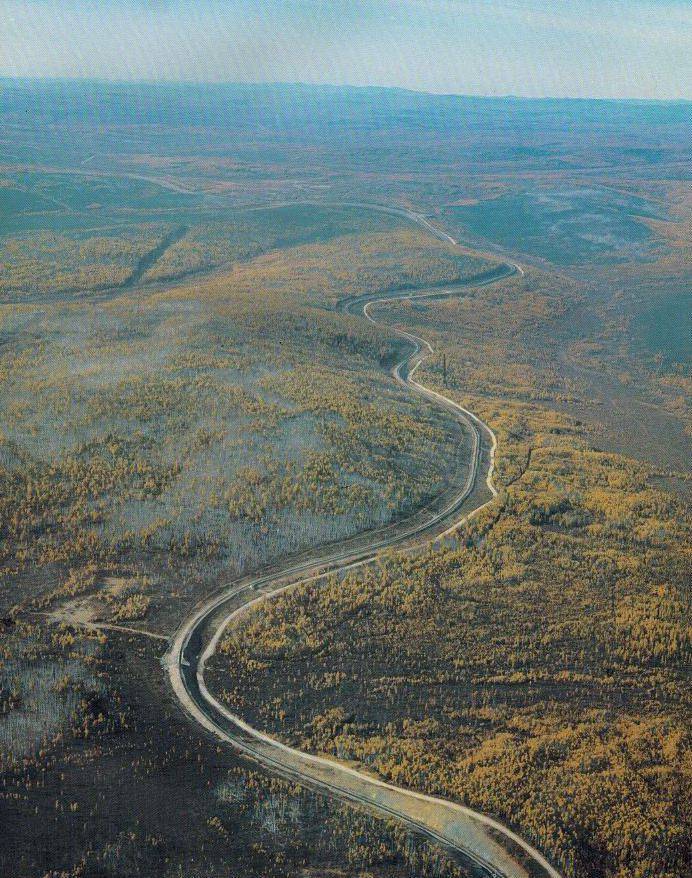 “All the powers look at our Vladivostok with envy!” - Colonel General Staff Nikolai Voloshinov proudly wrote, the one with which Transsib began (and this article), the first to pass along the route of the future BAM. He did not confine himself to pride; he devoted most of his life to the cause of preserving the Far East.

So, BAM allegedly cost 12,27 billion rubles in 1969 prices of the year. The publicist must faithfully reproduce this figure from the certificate. And just as conscientiously to admit: neither he nor the reader, nor even the economists, know what it really meant. It is useless, throwing his head back, trying to imagine, hastily calculate.

There is no such “exchanger” in Moscow and in nature, which can translate it “at the current rate”. Defense spending seemed to be then the famous 5 billion rubles. And what does this figure mean? Nothing, except that the defense was exactly.

So “economically absolutely meaningless” BAM. It is only known for certain that it exists and that the Far East is still Russian ...

Ctrl Enter
Noticed oshЫbku Highlight text and press. Ctrl + Enter
We are
“I now order the construction of a continuous railway across Siberia ...”BAM - the last building of socialism
17 comments
Information
Dear reader, to leave comments on the publication, you must to register.