What can we expect from Germany?

October 29 2015
41
The German integration project, called the European Union, is involved in a series of serious crisis situations, and the political situation in the country is extremely unstable. What we will see Germany in the coming years? What trends will dominate German society? Finally, how will the “Hans” inclinations affect Russia? 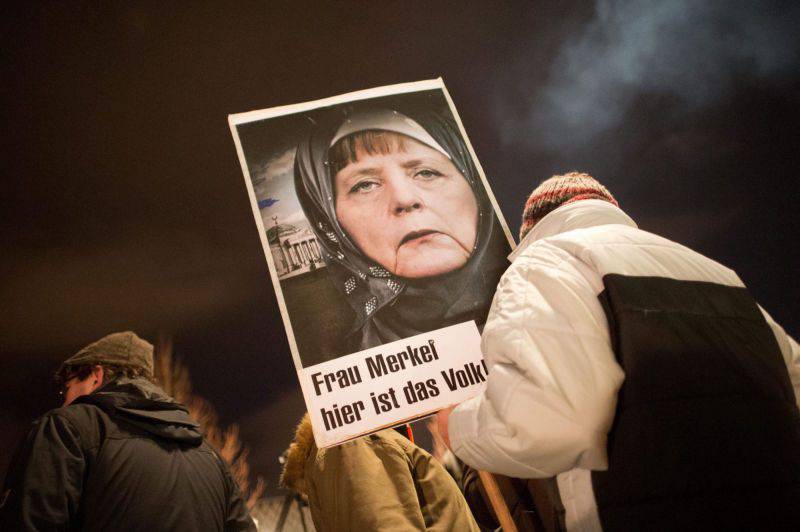 Problems in a cloudless sky

The 21 century was supposed to be the benefit of a united Germany. A country that has unfolded in full power, the head of the whole of Europe, having reached its position by non-violent means, an economic and technological leader all over the world ... And this was initially the case, but today the FRG has shown its inability to solve problems in an emergency way.

The consequences of the Arab spring, provoked by German politicians, as we see, have affected Europe only now, but, nevertheless, have overwhelmed her. Hundreds of thousands of immigrants (mostly adult men) rushed to the continent for a well-fed and happy life. So far, however, even their small part has not achieved this - the main subsidy places are already taken. But that's not the point.

Germany in its best condition is a terrible thing. German society, consolidating, rallies around one or another leader or ideology, and then releases the full energy, arranging wars on a global scale. It would seem that the Second World War taught a good lesson to the “Deutsches”, and the failed plan Morgenthau nevertheless formed the basis of the post-war policy of the Anglo-Saxons: a strong German state is not something that should not exist - such thoughts should not even appear. But everything worked out, as it happened, the FRG united with the GDR and things went so fast that hardly anyone expected it.

The phenomenon of the current political situation in the country is that, despite the high standard of living and high level of political and economic development, the Germans are divided on the main issues - how to live further and what state to build. Of course, the middle class, which has suffered enough in the 20 century, is setting the tone now: Bavarian and Stuttgart burghers want to live at least 100 years without social upheavals and global conflicts. Yes, but this is unlikely to work if the country is a puppet of the United States.

The completely unreasonable and suicidal policy of the European Union in the Middle East solves several problems, the most important of which is to deprive America of another geopolitical rival. It should be noted that the country from which the pan-European association was conceived loses most of all.

At the same time, the Germans are still in the thrall of anti-Russian illusions that depict our country as the culprit of all evils.
Of course, the work of independent media, such as Russia Today, has a positive effect on the speculations of ordinary people; there are our people there, like the notorious Sarah Wagenknecht, but the ideal is still very far away. Ordinary Germans are ready to sell and buy from us, but in the context of long-term political and economic cooperation they are rather fearful. At the same time, after the introduction of anti-Russian sanctions, pragmatic Germans continue to work with Russia on a number of important positions, export their goods and do not intend to refuse it even under US pressure — this can and should be used.

I must say that the people of Germany still have some sprouts of sanity, and NATO’s adherence to the foreign policy doctrine gives rise to certain doubts. Whatever one may say, Europe is in the aftermath of the consequences of the Arab revolutions, not of America, and of Europe accepting millions and millions of refugees. Moreover, their number will grow in direct proportion to how many regimes unsuitable for the American establishment will be overthrown.

In principle, the country now has quite possible conditions for the gradual "rule" of the political spectrum. The economic growth of the Federal Republic of Germany no longer shakes the mind; feeding half of the continent with euro-rotations negatively affects the German budget. And the immigration issue, which had previously stood very sharply, now sticks out in everyone’s head, and
current measures do not get rid of it.

The rise of the right-wing parties in Germany would not mean isolationism, but an obvious removal from political games in the Middle East, at least for 5-10 years. Germany, most likely, and so will toughen the measures of receiving refugees, the flow of which is increasing exponentially. Moreover, these parties, quite possibly, will be able to oppose American domination, which is more evident than ever in the light of the geopolitical situation.

The fact that a change in the foreign policy of the Federal Republic of Germany will happen sooner or later is already obvious. And, I think, we must prepare for this seriously. Of course, all these plans for the creation of a Eurasian Union from Lisbon to Vladivostok and the Berlin-Moscow-Beijing axis are more than tempting. But one does not need to be held captive by illusions - whatever the German government would be, it will always be at enmity with the Slavs and Russia as its main representative.

The slogan "Drang nach Osten" in recent years, 20 acquired more economic capital: in Eastern Europe, there are many German companies that successfully squeeze out local competitors. However, in the hands of skilled political consultants, he can be born in a new form in order to set up a society against our country. A strong and nationalistic Germany, tired of tolerance and other attributes of European democracy, will be ready to take a decisive step forward. And first of all it will be directed at us as an eternal stimulus. In such a country, there will be no place for peace-loving and pro-Russian politicians like Mrs. Wagenknecht: aggressive nationalists under the slogans of the Second and Third Reich will rush into territories that they consider their own. And we must be ready for this.

Ctrl Enter
Noticed oshЫbku Highlight text and press. Ctrl + Enter
We are
Results of the week. "Go on a horse, a century of will not be seen!"Raped Europe. What awaits Germany and other countries after the "fun night in Cologne"
Military Reviewin Yandex News
Military Reviewin Google News
41 comment
Information
Dear reader, to leave comments on the publication, you must sign in.