October 29 2015
336
The total volume of the Reserve Fund of the Russian Federation on October 1 of the current year (data from the Ministry of Finance of Russia) amounted to 70,51 billion dollars (approximately 4,67 trillion rubles) - 6,4% of GDP. It would seem that the airbag of financial security is quite solid (even by Kudrinsky standards), but it turns out that those who have it tear their hair at the Russian Finance Ministry, claiming that the pillow will soon cease to save Russia.


What remains of the hair on his head, is trying to tear the main government financial specialist Anton Siluanov, who said that 2016 could be the last year of the Russian Reserve Fund.

Finance Minister quoted by the news agency TASS:
At about 2,6 trillion rubles, we will reduce (this year) the amount of our reserves - more than half. All this means that 2016 year is the year when we can spend our reserves, our reserves, for the last year. And then we will not have such resources. If today's oil prices and the exchange rate remain, and today oil prices are about $ 44 barrels for Urals, and the ruble exchange rate is about 62 rubles. per dollar, then we can receive less 900 billion rubles. We really have such risks.

The hair and first deputy head of Mr. Silaunov Tatiana Nesterenko is tearing at his head, stating that if not in 2016, then in 2017-2018, the Reserve Fund will definitely cease to exist, forcing him to completely forget about the "fat years".

Ms. Nesterenko:
With such a budget deficit, with limited resources to replenish it, when we do not have foreign markets, domestic markets are limited, and if our deficit is vacuumed with recent financial resources, then it will be impossible to talk about development and investment in the private sector. Reserve funds are being depleted. We believe that at such a rate of spending of reserve funds, they can be completed. By the year 2017-2018 we will exhaust those resources that we received at the high price of oil.

Anton Germanovich Siluanov - hereditary employee of the Ministry of Finance (in Soviet times, his father German Siluanov worked in the Ministry of Finance of the USSR). A graduate of the Moscow Financial Institute (now the Financial University under the Government of the Russian Federation) 1985. Doctor of Economic Sciences. Winner of the Order "For Services to the Fatherland" III and IV degrees, medals of the Order "For Services to the Fatherland I degree". Awarded the Certificate of Honor of the President of the Russian Federation. All these awards are for a great contribution to the financial and economic policy of Russia, for success in financial activities.

Tatyana Gennadyevna Nesterenko - A graduate of the Khabarovsk Institute of National Economy with a degree in Finance and Credit (1981 year). Candidate of Economic Sciences. She was awarded medals of the Order for Services to the Fatherland, I and II degrees, the Order of Honor. He is the owner of the Certificate of Honor of the Government of the Russian Federation, Honored Economist of the Russian Federation. 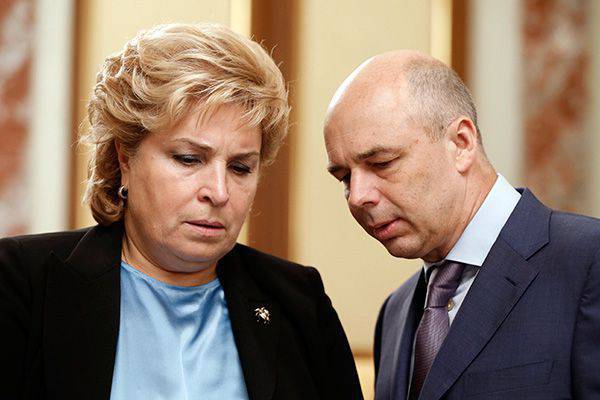 The award list, as can be seen, is among our leading government economists the richest, education is more than worthy, scientific degrees are present. And it is precisely this that makes one wonder: what, in fact, are the duties of the top ministry of finance? If it is in the course of its activities to rely on funds accumulated from super-profits during the sale of hydrocarbons, then it is not clear why the minister and his deputy need the degrees of doctor and candidate of economic sciences respectively. After all, if the main task of the ministry is to “promptly” announce to the public that the “egg-bowl” has been completely exhausted, then one of these chairs can sit down just as well with any average head count ...

But nevertheless it is worth turning to officially announced public goals. main financial department country. Perhaps there is really only one goal: to observe, melt or not melt the money of the Reserve Fund, which is not always accumulated even with the direct official participation of senior officials of the Ministry of Finance, and report on the melting to the population through the media, without worrying about how to execute the budget without the hope of reserves. But, it seems, no ... The goals are very versatile:

implementation of a responsible fiscal policy aimed at long-term sustainability;
sustainable functioning of the financial and banking system, the development of the domestic investor;
de-offshorization and the fight against the shadow economy, the return of capital and assets to Russian jurisdiction;
updating forms and mechanisms to ensure the balance and sustainability of regional and municipal finances;
increased debt policy flexibility.

So why, in this case, does it turn out that the minister and his first deputy are paying the first attention to the Reserve Fund, which is being depleted for a number of reasons? Where, in fact, is the implementation of the very "responsible budget policy aimed at long-term sustainability?" Why doctoral and candidate degrees do not allow the Ministry of Finance of the Russian Federation to effectively “fight against the shadow economy” and follow the path of de-offshore? Why, amid reports of the melting of the Reserve Fund, does the information that Switzerland have Ms. Skrynnik (ex-head of the Ministry of Agriculture) arrest 60 million Swiss francs suddenly come up? Ms. Skrynnik, of course, denies such information, but there is no smoke without fire (especially bearing in mind the recent scandal in the case of theft at Rosagroleasing). Are there any guarantees that other “ex” and not only “ex” do not have funds withdrawn abroad in their astronomical volumes?

It seems that the Ministry of Finance is trying to justify its, to put it mildly, far from the "five" work by the fact that, in order to perform financial and economic tasks, it is necessary, as Tatiana Nesterenko put it, to "vacuum" the reserve funds with a financial deficit. They say that the dollar is “tall”, oil is “rather low” - obligations cannot be fulfilled, and therefore - to walk, so to walk - we will finish off the Reserve Fund for a year or two, and then - ... And then, they say, let someone else think.

It turns out that in the financial department they openly beg for resignation, actually making it clear that they are not in a position to fulfill the tasks facing the department. Spending money at a price of 100-120 dollars per barrel of oil, you know, in a state, and as soon as you need to switch to a productive mode of operation and make real efforts to implement the budget, then immediately into the bushes? .. And, judging by the statements, “in bushes ”is not here and now, but only after the burning of trillions of rubles of the Reserve Fund.

Interesting position. But with the price of oil in 120 "candy wrappers" (and even with a multi-billion dollar cushion of financial security), the above-mentioned average statistical accountant is also able to execute the budget, but you must try to execute it at a price of 45-50 dollars. Or are our economic geeks not trained in this? ..

Ctrl Enter
Noticed oshЫbku Highlight text and press. Ctrl + Enter
We are
Results of the week. “Do you have brains or kyu in your head ?!”Situational analysis of the death of the MH17 flight (Malaysian Boeing 777), made on the basis of engineering analysis from 15.08.2014
Military Reviewin Yandex News
Military Reviewin Google News
336 comments
Information
Dear reader, to leave comments on the publication, you must to register.