Igor Pankratenko: Syria and Assad personally for the USA is not an end in itself, otherwise everything would have been resolved quickly enough 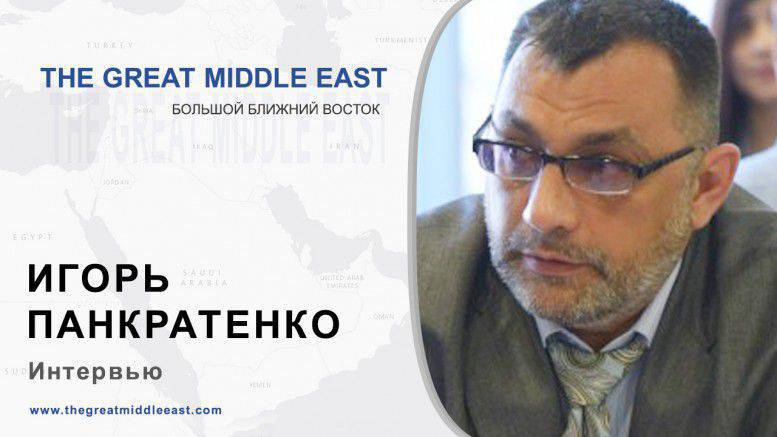 The situation around Syria and the processes taking place in the Middle East still occupy a significant niche in the global media space. The fate of Syria is of great interest in the world and in the expert community. In this regard, we have prepared an interview with a Russian specialist, candidate historical Sci., a member of the expert community "Russian Network Intelligence" - Igor Pankratenko.

Russian support for Bashar Assad gave him confidence, and increased the role of Assad in the eyes of the West - exactly like his legitimacy. Do you think this will encourage the US and Europe to engage in dialogue with him? Or will they continue, as before, to insist on their own and ignore the Syrian President?

The ultimate goal of the United States and its allies in Europe and the region is the removal of Bashar al-Assad from power. It will remain unchanged and in this respect there should be no illusions. This is the first. The second - the former Syria, Syria Assad, no longer exists and a return to the status quo, the state before the beginning of the civil war and external intervention, is impossible. These two theses are strategic axioms for Washington and its allies in the anti-Syrian coalition. But then political tactics begin, in which the most diverse combinations are possible.

In my opinion, Syria and Assad personally for the USA is not an end in itself, otherwise everything would have been resolved quickly enough. Damascus is one of the points at which the redistribution of spheres of influence in the Middle East takes place, involving international and regional actors, as well as local elites. Their main goal in Syria, let's speak frankly, is in principle achieved. The powerful state, which was a serious obstacle to the plans of the United States, Israel, Turkey, Saudi Arabia, is no more. From Tehran’s strategic ally, Damascus has become a strategic burden, which cannot be left behind, and it’s not enough to restore it as before - neither military nor economic resources are enough.

But in parallel with the redistribution of spheres of influence in the region, there is a complex process of forming a new system of checks and balances, during which a lot of difficult questions arise that the American ruling elites simply do not have a ready answer now. What is more profitable - to complete the "Syrian campaign" with one powerful cast of the coalition, or to preserve the current chaos for a while, during which competent authorities of the "secular opposition" will be prepared? Does Syria need to be preserved as a single state within the previous borders? Who will take responsibility for the "production of security" among the local tribes, the Syrian Kurds, and so on? How far can you "put" Turkey and the Saudis in Syria? And so on, there are a lot of questions for the USA.

There is a view in the Washington corridors of power that Assad may well be temporarily left as the leader of one of the fragments of the once united state. Until such time as there are people in his environment who are capable of carrying out a coup and starting the “transformation of the regime” in the direction set by the USA. That is, the question of the fate of Assad - he must leave - in general, resolved. Methods to eliminate it are still being discussed.

If the Assad army, with the help of Iran and Russia, still succeeds in clearing its territory from ISIL and other Islamist groups, what will be the fate of the Kurdish territories, where they have de facto created American quasi-state with American support? Does their fate await Iraqi Kurdistan? Or Assad will not tolerate the state within the state?

I repeat once again - my attitude toward the ultimate success of Assad, even with the help of Iran and Russia, is very skeptical. Simply put - I do not believe in it. The changes in the country have become irreversible. And the maximum possible that Damascus can do is to regain control over a number of territories.

Regarding specifically the areas where Syrian Kurds live, in particular, the information about the announcement of the Kurdish Syrian city of Gyra Spi (Tel Abyad) by the new part of the autonomous self-government system of the “Syrian Kurdistan” (there are three of them in northern Syria), view, not the government of Damascus, but in the framework of negotiations between the US and Turkey. And the main question here is who will lead: PYD (the Democratic Union party, supporting Assad and associated with Ankara's opponent - the Kurdish Workers Party recognized in Turkey, the US and the EU as a terrorist organization) or more moderate elements associated with Iraqi Kurdistan.

As you remember, in March 2015, the Minister of Information of Syria, Omran Zoghbi, said that Damascus "considers it possible to recognize Kurdish autonomy within the framework of the law and the Constitution." However, in my opinion, part of the Syrian Kurds are far from being able to believe Damascus recklessly.

Throughout the twentieth century, to one extent or another, there were hotbeds of tension in the Gulf region, and they did not disappear anywhere in the twenty-first century. Some experts believe that the greatest danger for the region is the tension between Iran and Saudi Arabia. Do you think this tension could result in a full-scale war?

I think the direct military clash between Tehran and Riyadh is from the realm of fantasy. But the fact that these two countries lead a full-scale “cold war”, which periodically in the territory of “third countries” develops into a “hot” - a reality that in the medium term will determine the development of events in the Middle East.

In Saudi Arabia, serious reforms are underway now, the transfer of power to a new generation of politicians is being prepared, which, no doubt, will act against Tehran no less harshly than their predecessors. At the same time, they are not betting on full-scale conflict, but on proxy wars and special operations throughout the Middle East.

Ctrl Enter
Noticed oshЫbku Highlight text and press. Ctrl + Enter
We are
About Stalin and KhrushchevInterview by President Bashar Al-Assad to the Sunday Times
Military Reviewin Yandex News
Military Reviewin Google News
26 comments
Information
Dear reader, to leave comments on the publication, you must sign in.