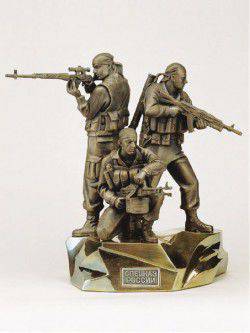 Last Saturday, October 24, without much external noise, celebrated the Day of Special Purpose Units. It was established relatively recently - 31 May 2006, by presidential decree.


It was assumed that this day would be a holiday for all special units - the Ministry of Internal Affairs, the Federal Security Service, the Federal Penitentiary Service, the tax police, and possibly the bailiffs. Today, almost every “pumping station” has its own special forces, as the colonel of the General Staff reserve put it. And once the special forces were one, and it belonged to the GRU GSh.

So, despite the general name of the holiday date and the abundance of special forces of various security agencies, October 24 is truly marked only by special forces of the Main Intelligence Directorate - regardless of their formal subordination in the slightly confusing hierarchy of the modern Ministry of Defense.

It is worth recalling, whence came the specific date: October 24 of 1950, the secret directive of the USSR War Minister, Marshal of the Soviet Union A.V. appeared. Vasilevsky number ORG / 2 / 395 / 832. In the structure of the Armed Forces of the Soviet Union, 46 separate special-purpose companies appeared, each consisting of 120 people. The position of the company commander was determined major.

These units immediately coded more than strategic missile units. Those - even participated in the parades. And very few people knew about the existence of special forces even in the Ministry of Defense and in the General Staff itself.
Afghanistan was the high point of special intelligence. Veterans remember him today with some kind of indescribable warmth. History back does not return. But, according to very worthy military analysts, the GRU special forces, if he were immediately given complete freedom of action in this country, would reduce the bloodshed to a minimum. Many are sure: special forces were able to take control of virtually the entire territory of the country and make most of their gangs as their allies: they themselves would have finished off those who wanted to remain under the Americans. This did not happen. The Soviet limited contingent was ordered to fight, and the pilots bombed, bombed and bombed.

Our army lost thousands and thousands of young lives in the war “behind the river”. And one special forces 15 brigade lost there soldiers and officers killed by 140 killed - too many. But at the same time, more than nine thousand dushmans, as well as foreign mercenaries and advisers, were destroyed and captured. Dozens of tons of weapons and ammunition were seized.

What is most surprising: the wonders of heroism, and most importantly, the highest level of military professionalism, were shown by very young senior lieutenants, recent graduates of the intelligence department of the Kiev All-Arms Military School and the 9 of the Ryazan Airborne Company.

On the combat past, special forces can talk endlessly. However, when the war was going on in Afghanistan, the Soviet people did not know anything about their true heroes. And then there was “perestroika”, a bloody parade of sovereignties, and other rubbish. It was then that the special forces and opened. Who and for what purpose - now it is impossible to say for sure. But the first and very bright injection into the public consciousness was the image of a merciless special forces soldier with a bloody sapper blade in his hands, which he supposedly chopped off with pleasure to “foremen of perestroika” and “heralds of publicity”.

But it was precisely the GRU special forces who stopped the civil war in Tajikistan. The very same 15-I brigade, which was then commanded by Colonel Vladimir Kvachkov. It was this autumn 1992 of the year. When the Soviet Army was divided, the brigade went to Uzbekistan. But since “separatism” has not yet been settled, a kind of dual power has taken shape. That allowed the special forces to work as soon as they knew how, without regard for the high command authorities in Moscow and Tashkent.

Tajikistan really became the bloodiest ulcer on the territory of the newly emerged CIS. And the common border with Afghanistan only aggravated the situation, making it simply catastrophic and hopeless. There was a real massacre in the country. Tajiks brutally murdered the Tajiks, entire villages of Uzbeks were massacred, Russians were killed with terrible executions.

So, one 15-Special Forces brigade, without losing a single person, very quickly stopped the killing of Russians and other "non-Tajik", provided the evacuation from the country to everyone who wanted.
And then, by the forces of healthy forces in Tajik society, which the Russian intelligence officers quickly found and organized, stopped the internecine fratricidal war. Since 1994, Tajikistan lives in the world.

Do you think the GRU special forces and specifically 15-th brigade someone thanked? In general, she was disbanded; some of the officers were even criminally prosecuted in Tajikistan and Uzbekistan. And her former commander is now a simple Russian convict.

The GRU commandos have never been untouchable, on the contrary, very vulnerable. They were always hunted by the enemies of Russia, and the special services of the state to which they served and serve faithfully never let them go. Maybe because those special services came to people who have developed an association from their youth: a special forces officer is a monster with the very bloodied deminer in his hands ...

Chechnya is another bright page in the history of special forces. There, on their territory, they had to be thousands of times more complicated than abroad, in Afghanistan and Tajikistan. Why? We will not go into the details and stir up the recent past ...

By the beginning of the second stage of the so-called antiterrorist operation in the North Caucasus, it became clear that the GRU special forces were playing the key role. And only after 2000, freedom of action appeared. The result is known to all. Active hostilities in the North Caucasus very quickly ceased.

To somehow celebrate the role of special-purpose intelligence officers, their holiday was introduced for the first time in 2000. True, at the departmental level. Secretary of Defense Marshal Igor Sergeyev 26 July 2000 of the year issued an order according to which October 24 should be marked as “The Day of the Special Forces of the Armed Forces”. In 2006, a presidential decree appeared, which was mentioned above.

So, October 24 2000 celebrated the Special Forces 50 anniversary. The festive meeting and concert were held in the Cultural Center of the Russian Army on Suvorov Square. Veterans of special forces came from almost all of the former USSR. They were congratulated by Defense Minister Igor Sergeyev, Chief of the General Staff Anatoly Kvashnin, Head of the GRU Valentin Korabelnikov. And the congratulations were not of a protocol nature, they were humanly warm and sincere. Moreover, after the end of the official part, both the Minister of Defense, and the National Security Service, and even the head of the GRU were very accessible and quite friendly in communication. This has never happened and, alas, most likely, there will be no more. It is even more improbable that at the entrance to the building where the special forces ’jubilee was celebrated, there were no metal detectors or X-ray machines, no one was searched. But there were no strangers there either.

In 2005, the Special Forces 55 anniversary was celebrated at the Central Theater of the Russian Army. The concert was so-so, but external pathos - over the edge. In 2010, the special forces veterans were probably very rich and made a jubilee celebration at expensive Crocus City. Paphos in general poured over the edge, the concert was vulgar, none of the military leaders Grushnikov congratulated.

In 2015, there was no protocol solemn meeting. The event was held again in the theater of the Russian army. Gathered color special forces. Veterans came from all over the former Soviet Union - except for Ukraine. Gennady Vladimirovich Yushkevich arrived from Belarus. This is a legend of military intelligence, the last of the group "Jack". The one who worked in East Prussia since the end of 1944, almost until Victory, was not disclosed.

Spetsnaz GRU personally congratulated the Minister of Defense Sergei Shoigu. Both the Chief of the General Staff and the Chief of the GRU sat in the hall, although they did not come on the scene.
The concert was wonderful. This was the first performance that was entirely devoted to the GRU special forces. Thanks to his nameless organizers. By the way, only the Red Star told in detail about the holiday itself.

When the songs were performed, photos of those who fought in Afghanistan appeared on the screen. Someone died, someone died in recent times, and someone was sitting in the hall.

Oleg Gazmanov finished the concert with his hit “Gentlemen Officers”. He sucked in that the gentlemen's heart was under the gun, and the hall, where only “comrade officers” were, rose somehow meekly.

Paradoxical situation! Experts of the highest level, who in the battle of flying determine who is their own, who is a stranger, can’t understand for twenty-four years before pressing the trigger, that the song is not about them. A GRU colonel nearly nailed me once, when I did not defiantly get up while performing this hit. It is ridiculous, he was an obstinate communist, although he made a good career after the collapse of the Union — he served honestly, did not take bribes, did not trade in his Homeland.

I asked him: did you even try to understand the lyrics? "Gentlemen officers," whose "heart under the gun" is the anthem of the defenders of the White House in August 1991. There, they say, was a battalion of "freedom-loving" deserting officers from the Soviet Army under the modest name of "Russia". Again, they say, they loved to sing to the guitar about how the “quilted jacket Bolsheviks” kept them at gunpoint and led them to be shot. He played along with Rostropovich.

“Russian officers”, whose hearts “beat in harmony” and “shone for freedom” in “this is not from Russian officer life. Verse is not Russian, and the pathos "for our and your freedom" is not ours. We have always been spiritually free. And the freedom of the spirit - it determines everything.

But after all they jump! “Russian officers”, which are essentially Russian officers. When will it end?! And when is a quite good singer Gazmanov throwing this chanson from his repertoire?

In the concert, where everything revolved around the actions of special forces in Afghanistan and in the hot spots of Russia, the subject of Africa suddenly appeared.
The bright scene was built on a verse recitative, where the words “We go across Africa, dust from under our boots” were repeated. The actors, dressed in the form of special forces, showed how difficult it was for them to go, but they achieved their victorious goal.

In the foyer of the Central Academic Theater of the Russian Army, where the solemn event was held, an exposition of paintings by Lieutenant-General of the Reserve Alexander Karpychev was launched. He is probably a veteran of the GRU, and served in Syria. The most vivid of his paintings are devoted to this country. Man, if talented - talented in many ways. The pictures are great. Karpychev is one of the best, without "probably", specialists in the Middle East.

Why would he 24 October 2015, arrange a Syrian opening day, and the artists to sing "about Africa"? I am sure: only the special forces of our country, Russia, could put a final and completely peaceful point in the protracted civil war in Syria.

Ctrl Enter
Noticed oshЫbku Highlight text and press. Ctrl + Enter
We are
Western look at Russian special forces in the Crimea and the Donbas
Military Reviewin Yandex News
Military Reviewin Google News
72 comments
Information
Dear reader, to leave comments on the publication, you must to register.