The problem of pollution of outer space worries the entire aerospace community. Such a hypothetical development of events in near-earth orbit, like Kessler's syndrome, predicting the formation of space debris out of control, stirred up even popular media. It is clear that there is a need to conduct basic research in order to understand the danger that even a small fragment carries in it, and calculate how much we are willing to pay for the cleaning of outer space.

Currently, politicians, scientists, technicians and the general public are deeply aware of the problem of space debris. Thanks to the fundamental work of JK. Liouville and Nicholas Johnson, published in 2006 year, we understand that the level of contamination is likely to continue its growth in the future, even if you stop all launches. The reason for such steady growth are collisions, which, according to the expected forecasts, will take place between satellites and rocket stages that are already in orbit. This greatly worries many satellite operators, who are forced to take appropriate measures to protect their assets.

Some experts believe that these incidents will only be the beginning of a series of collisions that will make access to low Earth orbit almost impossible. Usually, this phenomenon, which was first described in detail by NASA consultant Donald Kessler, is called Kessler syndrome. But the reality is likely to be very different from similar predictions or events shown in the feature film Gravity. Indeed, the results presented to the Interdepartmental Space Debris Coordination Committee (IADC) at the 6th European Conference on this topic showed an expected increase in the amount of debris by only 30 percent during 200 years with continuous launches.

Collisions will still occur, but the reality will be far from the catastrophic scenario that some fear so much. The increase in the amount of space debris can be reduced to quite a modest level. IADC’s ​​proposal is to widely disseminate and strictly adhere to the guidelines for the prevention of space debris, especially regarding the neutralization of energy sources that should be fully produced by the end of the flight, and disposal after the end of the flight. Nevertheless, from the point of view of the IADC, the expected increase in the amount of garbage, despite the efforts being made, still requires the introduction of additional measures to combat the existing risk factors.

Significant interest in the reclamation of the space environment was noted nine years after the publication of the work of Liouville and Johnson. In particular, certain steps have been taken around the world to develop methods for removing objects from a low earth orbit. The European Space Agency, for example, recently announced its intention to win support from the government in order to de-orbit the European spacecraft in the next decade. The agency has conducted numerous studies to determine rational and reliable ways to achieve the goal. A key element of the planning was computer models of clogged space, which showed that the growth of the debris population could be prevented by removing a certain spacecraft or rocket stages. In computer simulations, these objects are identified as the most susceptible to collision, therefore, after their removal from orbit, the number of collisions should sharply decrease, which would prevent the emergence of new debris as a result of debris scattering. 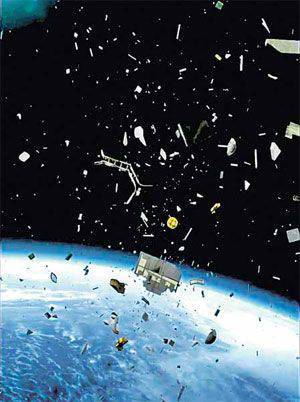 Almost ten years have passed since the publication of the work of Liouville and Johnson, and it is surprising that no methodological principles have been presented at the international or national level that clearly define measures to eliminate the consequences of pollution of near-Earth space. There seems to be some apathy towards the development of a garbage disposal procedure methodology, despite calls for action. But is it really?

But in fact, the situation is not as simple as it seems. With regard to the space debris removal procedure, there are some fundamental questions that have yet to be answered. Of particular concern are issues related to property, responsibility and transparency. For example, many technologies proposed for removing debris can also be used to remove or disable an active spacecraft. Therefore, one can wait for the charges that these technologies are weapons. There are also questions regarding the cost of a consistent garbage disposal program. Some technical experts estimated it at tens of trillions of dollars.

However, perhaps the most important reason for the lack of adequate methodological principles lies in the fact that we do not yet know how to carry out the reclamation, which, in practice, means the cleaning of outer space. But this does not mean that we do not know what technologies we need.

Algorithms for single use have already been developed. The real problem arises from a seemingly simple task: to identify the “right” garbage for removal from orbit. And until we can solve this problem, it seems that we will not be able to recultivate the cosmos.

We play in the wreckage

In order to understand the problematic nature of solving such a seemingly simple task as identifying garbage to be removed, we use the analogy of playing a deck of 52 ordinary playing cards. In this analogy, each map is an object located in outer space that we may want to remove to prevent a collision. After the cards are dealt, we place each card face down on the table. Our goal now is to try to identify the aces and remove them from the table, since these very cards are satellites or other large objects of space debris that may become participants in a collision at some point in the future. We can remove as many cards from the table as we want, but whenever we remove one card, we have to pay 10 dollars. In addition, as we move away, we have no right to look at the map (if the satellite is removed from orbit, we cannot say with certainty that it was he who could become a participant in the collision). Finally, we have to pay 100 dollars for each ace that remains on the table, which represents potential losses resulting from collisions involving our satellites (in reality, the cost of replacing a satellite can range from 100 thousand dollars to two billion).

Well, how do we solve this problem? On the reverse side, all the cards are the same, so there is no way to establish where the aces are, and the only way to make sure that we removed all the aces is to remove all the cards from the table. In our example, this will cost a maximum of 520 dollars. In outer space, we face the same problem: we don’t know exactly which objects may be involved in collisions, but it’s too expensive to remove them all, so we have to choose. Let's assume that we have decided to choose: in order to remove one card for the sum of 10 dollars, what is the probability that we removed an ace? Well, the likelihood that a card is an ace is four divided by 52, in other words, approximately 0,08 or 8 percent. Thus, the probability that the card is not an ace is 92 percent. That is the probability that we have wasted our 10 dollars in vain.

We can use this method to determine the probability that we have removed both aces - simply multiply the probabilities to find the answer: 4 / 52 multiplied by 3 / 51, which gives us the probability of 0,0045 or 0,45 percent of the cost of 20 dollars for two remote cards. Not very encouraging.

It turns out that in order to increase the chances of removing at least one of the aces, we need to remove more than nine cards (worth 90 dollars) or more than 22 cards (worth 220 dollars) if we want to be sure of 90 percent that we removed one of the aces. Even if we succeed, the three aces still remain on the table, so in total we still have to pay 520 dollars, which coincidentally make up the same amount that we had to pay if we had chosen the option of deleting all cards.

The games are over.

Upon returning from our analogy back to the real space environment, the situation seems more alarming. Currently, using the United States network of space stations for observing outer space, approximately 20 000 objects are tracked, about six percent of which are objects with a mass of more than one tonne that can hypothetically participate in the collision and which we might want to remove . In the card analogy, our problem is that the “shirt” of all the cards is the same and the probability that one is the ace of spades is the same as the probability that the other is also ace. There is no way to identify the cards you need and remove them from the table. In fact, our chances of preventing collisions are much higher than in a card game, because there is a chance that some objects are involved in collisions in orbit and we can focus our attention on them. For example, objects that are in densely populated orbits, such as heliosynchronous, at altitudes between 600 and 900 kilometers are most likely to be involved in collisions due to congestion in this zone. If we focus our attention on similar objects (and others on similarly overloaded orbits) and take into account the predictions of the possibility of their collision, it turns out that we have to remove objects near 50 in order to reduce the expected number of catastrophic collisions by only one unit, which follows from the research results undertaken by members of the IADC space agency.

And it turns out that even if several objects may be subject to removal by a single spacecraft “cleaner” (and five targets appear to be a universal alternative), many flights — often complex and pretentious — will have to be undertaken only to prevent one collision.

Why are we unable to more accurately predict the probability of collisions and delete only those objects that, as we know for sure, will be dangerous? There are many parameters that can affect the satellite trajectory, including the orientation of the satellite, whether it is random motion or space weather (which can affect the aerodynamic drag experienced by the satellites). Even small errors in the initial values ​​can lead to large discrepancies in the results of calculating the satellite position compared to reality, and after a relatively short period. In fact, we use the same methodology as forecasters: we will use models to generate probabilities of specific results, but not the fact that these results will ever be obtained.

Thus, we have technologies that can be used occasionally to remove space debris. Such is the position taken by the European Space Agency with their planned e.Deorbit mission, but there are still problems that need to be solved to identify the objects most suitable for removal. These problems must be solved before the necessary directives and methodological principles can be provided to those who are interested in preparing a long-term space debris removal program, which is necessary for the effective restoration of the environment.

Methodological principles in terms of specific facilities, their quantities, requirements and limitations are important to increase the likelihood that efforts made to restore the environment will be effective and expedient. To develop such methodological principles, we must reconsider our unreasonable expectations of a favorable outcome.

Ctrl Enter
Noticed oshЫbku Highlight text and press. Ctrl + Enter
We are
The world's first experiment on trapping space debris with a net is being prepared.Space debris
Military Reviewin Yandex News
Military Reviewin Google News
39 comments
Information
Dear reader, to leave comments on the publication, you must sign in.