October 28 2015
17
The most terrible criminal - armed with ideology


What is the difference between ISIS and Wahhabis who are more familiar to us from the events in the North Caucasus, Islamic scholar Rais Suleymanov, expert of the National Strategy Institute, editor-in-chief of the Muslim World magazine, told the Military Industrial Courier.

- The main difference between ISIS and all other Islamist organizations and movements is that they went further than others in the realization of their main goal - they declared a caliphate. This cherished dream of an ideal state, which Islamic fundamentalists cherished, was put into practice. And if in the North Caucasus or in Afghanistan they fought for the creation of Islamic states that were seen in some specific boundaries (the same “Emirate of the Caucasus”, proclaimed in 2007 year), the ISIL leaders proclaimed it to be extraterritorial in nature. They even call him simply the “Islamic State” (ad-Dawlah al-Islamiyah). If Al-Qaida functioned as an organization with a network of branches in different countries, the Emirate Caucasus was more virtual, then ISIL is a territory where its state institutions have been operating for more than a year, and in different countries from Nigeria to Afghanistan - he is sworn in by groups with similar views. The main danger lies in the fact that the ideology of ISIS is expansionary in nature, threatening the territorial integrity of the countries close to which it is located, and the national security of many others that are far away. Pulling as a magnet from the countries of Europe and from the post-Soviet space into the ranks of the Islamists, ISIL in the future will begin to transfer them back - to launch terrorist activities on the ground.

Traditional Islam for Russian Muslims is a form that has historically been adopted by one or another indigenous people of the country, has become part of its national culture, traditions, self-awareness and worldview, preaching peaceful coexistence with people of other religions, loyal to the Fatherland and political device. In theological, theological terms, in relation to the indigenous Muslim peoples of Russia, it is usually still specified which religious-legal school (mazhab) they belong to. In Russia, there are two madhhabs - the Hanafi (the peoples of the Ural-Volga region, the Crimea and partly of the North Caucasus - the Adygs, the Nogai, etc.) and the Shafiites (the other peoples of the North Caucasus).

The ideology of ISIS is Wahhabism, and its most extreme form is takfirism, when all the other Islamic directions that disagree with it can be taken out takfir (accusation of disbelief), which means full approval of the murder.

- What is understood as Islamic extremism or radicalism?

- Islamic extremism - a set of manifestations of extreme views and illegal actions with the use, cover and justification of their dogma. When they come out for changing the existing state system, they begin to manipulate the religious feelings of ordinary Muslims, rigidly opposing themselves to the “infidel,” this is Islamic radicalism.

- The facts are known when Russians became Wahhabis. What caused this?

- I single out several groups of Russian Muslims, all of them, according to my estimates, from three to five thousand, classifying by motivation for Islam: 1) who converted to Islam for ideological reasons, as a result of spiritual quest; 2) having changed faith due to family and marriage circumstances, for example, a Russian girl marries a Tatar, and before the wedding there are nicknames (Muslim marriage), during which the bride adopts Islam; 3) have adopted Islam out of opportunistic considerations, when it is profitable to be a Muslim, this can be observed among some officials in Tatarstan who converted to Islam to become their own among the national bureaucracy; 4) captured in Afghanistan or Chechnya and remaining in the bosom of Islam. 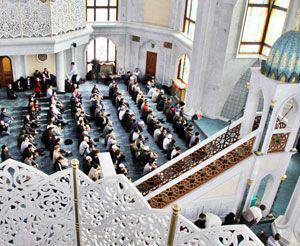 The greatest number of radicals comes from the first group. After the adoption of Islam, these people are experiencing neophyte syndrome - the desire to demonstrate religious zeal, to correct a certain guilt for having not been a Muslim before, and to prove to co-religionists that it is not worse. Often, it is in this environment that those who are ready to prove their new religious identity with the help of weapons. The most famous Islamic terrorists in Russia are representatives of Russian Muslims: Alexander Tikhomirov (Said Buryatsky), Victor Dvorakovsky, Vitaly Razdobudko, Alla Saprykina, Pavel Pechenkin. So it turns out that three to five thousand Russian neophytes yielded as a percentage much more terrorists than the five million Tatars who traditionally practice Islam.

Among the reasons for which Russians choose Islam, I would call either the lack of religious experience of being in the bosom of Orthodoxy, or the perception of Christianity as a religion of wimps, advocating non-violence, and also fully part of the state system of Russia. They explain their opposition to the ROC and, accordingly, their choice in favor of Islam by the fact that the Church is the “servant” of the state, which is identified with corruption, lawlessness, lawlessness. In the same way, by the way, they also belong to the traditional Muslim clergy, considering it to be the service personnel of the bureaucracy. Islam is seen by them as a religion opposed to the political system. Since the Russian boy or girl is not able to thoroughly understand the different currents of Islam, the radicals present Wahhabism as the only true creed.

- There are cases when Wahhabi ideology penetrates the environment of law enforcement officers and military personnel?

- The well-known example is Colonel of the Ministry of Internal Affairs of Tajikistan, commander of the riot police, holder of several orders and medals Gulmurod Halimov. This is the most egregious case when a law enforcement officer, and a senior official, became a Wahhabi and even went to fight on the side of the Islamists. But there are sad examples in Russia. Thus, the deputy prosecutor of Almetyevsk (Tatarstan), Askhat Davletshin, in 2009, left to fight for the Taliban in Afghanistan, and from there he moved to Pakistan. Subsequently, he managed to smuggle his like-minded Pavel Dorokhov (Abdul Mujib) back to Russia, where in Salavat (Bashkortostan) he, together with the local Wahhabis, tried to blow up the pumping station of the water utility. The attack failed.

No known cases of the spread of Wahhabism in the Armed Forces of Russia have yet been noted. Although the biographies of some Wahhabis can be judged that a person, having gone into the army, was returning home with radical convictions.

- Russia openly sided with the legitimate government of Syria against ISIS. In connection with this, do you expect a surge of extremism in our country?

- As we remember, from 1999 to 2004, the Wahhabis in response to our actions in Chechnya blew up houses in Moscow, Buynaksk, Volgodonsk, Kaspiysk, and took hostages. There were acts of terrorism in scope and smaller consequences. And now you need to be prepared for the fact that there will be similar attempts by supporters of ISIS. The number of compatriots who went to Jihad is constantly growing: if 2013 Russians left for Syria in 400, then 2014 is already at the beginning of 1700, and in September, according to the FSB, 2400. There is a tendency to increase. 200 people left the territory of the Volga Federal District. After some time, the Wahhabis returned, the former igilovtsevs were arrested from the end of 2014 onwards, and some trials had already taken place (there were three such cases in Tatarstan).

ISIS from the very beginning did not hide its plans for Russia, especially the North Caucasus. Now, when we are already participating in the war with ISIS, we must be prepared that jihad will be announced not only to the Assad government, but also to us. And the Wahhabis can repeat all the actions that they took during the second Chechen war: terrorist attacks, hostage taking, etc.

- What recommendations can be given to military and police officers, who, as a matter of duty, have to resist radicals and extremists?

- First, be prepared for charges of Islamophobia. This is a favorite technique of the radicals. It is not easy for security officials in the Caucasus and the Volga region, who are ethnic Muslims. They are accused of betraying their religion. Wahhabis love to organize such a public campaign on the Internet. Secondly, to understand that the fight against religious extremists should be based on traditional Islam. Well, when power methods are combined with preventive. The traditional Muslim clergy should be an ally of the police, the army and the FSB. And it must be sure that law enforcement agencies will protect it. Often, Wahhabis threaten even imams if they begin to cooperate with the police. And thirdly, we must remember that the most terrible criminal is armed with ideology. It is important to counter it with a more attractive for young people view of the world, built on a positive and encouraging creative work.