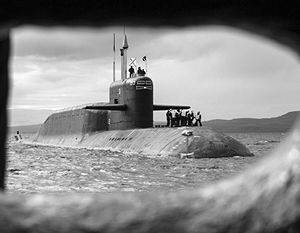 Moscow considered the manifestation of an “autumn aggravation” to appear in the Western press publications about the “aggressive activity” of Russian submarines near important communication cables providing the US with communications and the Internet. Concerns on this topic have already been expressed by the US military. Experts told where and why Russian submarines are sailing and whether they are capable of cutting the trans-ocean cable, which in fact may not be at all for communication and telephony.

The Pentagon is worried that Russian submarines are “aggressively operating” near important submarine communications cables that “provide almost the entire Internet in the world,” and the United States with telephone communications. It is reported that the Russian side is able to intercept data that is transmitted via cable, writes the New York Times.
The command of the US Navy notes "a significant intensification" of Russia's actions in the areas of communication cables between the North Sea and northeast Asia, as well as in waters off the coast of the United States.

The concern of the US military is that, in the event of “tension or conflict” with Moscow, Russia could attack these cables, “damaging them to break communications, on which governments, economies and citizens of Western countries so strongly depend.”

The publication notes that although now there is no evidence of cable damage, the alertness of the leadership of the US armed forces on this issue is constantly growing. At the same time, internal discussions in Washington suggest that the US authorities look at Russia through the prism of mistrust, as during the Cold War.

In general, the Pentagon carefully conceals most of the data related to the naval activity of Russia, as well as the measures that the US intends to take in the event of a possible attack on underwater infrastructure. But the commander of the underwater fleet USA Frederick Regge admitted to the publication: “Every day I’m worried about what the Russians can do.”

The representative of the US Navy, William Marks, said that potential actions on the part of any state that are aimed at damaging communication cables would be of concern in Washington. Nevertheless, Marx stressed that they did not discuss specific details "because of the secrecy of underwater operations."

The New York Times recalls that in September, according to the American side, the Russian ship Yantar was heading towards Cuba. There, near the American naval station in Guantanamo Bay, just one of the cables in question is laid. Deep-sea vehicles "Yantar" just able to cut it.

The publication adds that several military sources in the United States at once confirmed the existence of a corresponding danger.

In Russia, estimates of American publications range from "again something to think about" to "this is none of your business where our submarines sail."
The official representative of the Ministry of Foreign Affairs, Maria Zakharova, linked the information received with the “autumn aggravation”: “The best answer to the question“ What worries you most at this time of year? ”Is presented in the New York Times article,” she wrote on Facebook.

Military expert, chief editor of the Arsenal of the Fatherland magazine, Viktor Murakhovsky told the VIEW newspaper that fiber optic cables that provide Internet traffic from Europe to the USA do indeed go across the Atlantic. The same, only Pacific, cable leads from the USA to Japan and China.

It’s possible to argue only hypothetically about whether Russian submarines are acting in the way the New York Times wrote. In any case, this is classified information. But Russia does have deep-water nuclear submarines (atomic deep-water stations), for example AC-12, also known as “Losharik”, which is capable of performing a significant range of tasks at a great depth, up to several kilometers.

“Why Americans are worried about the Internet, I just do not understand. These boats are not intended for the Internet, they perform military tasks, ”the expert noted.

Murakhovsky clarified that fiber optic cables are not US state property: as a rule, private communications companies own the cable. “They usually create a pool, a holding, to build and operate this cable, which includes Americans, Europeans, Japanese, and Chinese. How can they protect him? Yes, nothing. How can this be done if it is laid along the bottom of the ocean at a depth of several kilometers? ”He added.

In his opinion, the publication in the NYT may be an element of the information war against Russia.

Finally, the expert added that the Americans themselves do not have comparable devices to the AU-12.

Igor Kurdin, chairman of the St. Petersburg submariners' club, captain of the 1 rank of the reserve, commented to the VIEW newspaper in his comments that “Americans have recently started to worry a lot”. They are worried and offended by the restoration of the presence of the Russian Navy in different parts of the oceans, although the US Navy "never left its patrol areas even after the end of the Cold War."
Kurdin made it clear that both the Americans are watching the Russian coast and the Russian sailors are doing their job.

As for the article in the New York Times, he found several inaccuracies in it. First, “Americans are cunning, saying that we are talking about cables for the Internet,” it is “written for readers of the NYT and other newspapers.” Second, Americans cannot track the movement of Russian submarines from satellites.

Most likely, it is a question of a normal military competition between Russia and the USA. “Warfare is a simple thing. If there is any new weaponthe other side creates anti-weapons, etc., ”explained Kurdin.

Back in 1960, the Americans began to create the SOSUS long-range acoustic monitoring system, the principle of which was to lay hundreds of kilometers of cables along the ocean floor, which fixed the movement of submarines. To combat SOSUS in the USSR, deep-sea apparatuses appeared capable of cutting the cable. “Of course, they still exist,” the expert added.

You can only reason hypothetically

The editor-in-chief of the magazine “Arms Export”, Andrei Frolov, told the VIEW newspaper that the deep-sea AC-12 is not even under the jurisdiction of the fleet, but under the jurisdiction of the elite main deep-sea research department of the Ministry of Defense. As a rule, the submarine delivers it to the place of service easier - the carrier boat.

“I argue hypothetically. And, in principle, the interest of our submarines can be simple. They are able - just as the Americans did in their time - to put special buoys on communication cables in order to intercept messages, or in case of an X-hour, you can install certain “destroyers” who simply break the connection and the Internet. But I still have not heard of such a danger, and I do not really believe that this is how it happens. Media reports are more like an element of the information war due to the activity of Russia in Syria, etc., ”he concluded.

Russian submarines are required to maintain combat duty in the Atlantic Ocean, where submarine communication cables are laid to track the movement of American submarines with nuclear ammunition, and no one can interfere with this, said RIA "News»Admiral Vladimir Komoyedov, Chairman of the State Duma Defense Committee, former Commander of the Black Sea Fleet.

“The United States is beginning to resemble Sweden, where everyone feels that our submarines are constantly present in their territorial waters - fear has big eyes. Although these communications do exist, we certainly will not cause any harm to them, either technically or financially, ”he noted.
Nobody has yet canceled operations to obtain secret information from submarine cables since the cold war between the USSR and the USA, Admiral Viktor Kravchenko, chief of the Russian Navy’s headquarters (in 1998 – 2005), told RIA Novosti.

“Soviet, then Russian submarines repeatedly carried out operations to install sensors on American cables in the Atlantic area to obtain information, the same operations were carried out by Americans off our shores. Since then, hardly anything has changed, ”he believes.

Recall of suspicions by the US Navy in relation to the actions of Russian submariners were first reported in early September. At the same time, American analysts noted that this case could be part of a larger strategic intelligence operation of Russia in relation to American missile carriers and other targets. Fox News, citing a senior official, added that "the United States also keeps its spy ships off the coast of Russia."

Prior to this, the Swedish military searched, but did not find an “unidentified underwater object” in their waters, which they took to be a submarine from Russia.

In addition, the search for "Russian submarine" revealed a gap in the defense of Britain.

Ctrl Enter
Noticed oshЫbku Highlight text and press. Ctrl + Enter
We are
What you didn't want to know about EnglandInterview by President Bashar Al-Assad to the Sunday Times
Military Reviewin Yandex News
Military Reviewin Google News
46 comments
Information
Dear reader, to leave comments on the publication, you must to register.