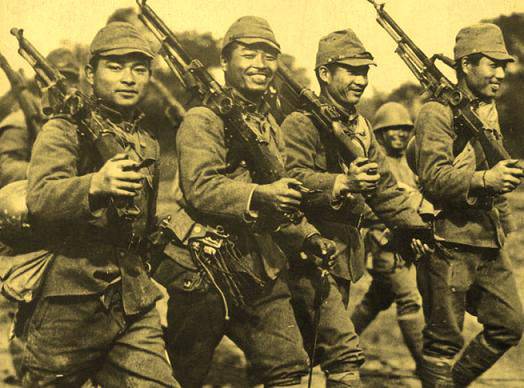 After embarking on the path of foreign expansion at the turn of the 19th and 20th centuries, the Japanese government began to harbor ideas of rejection of our eastern regions from our country. This policy, especially vividly carried out during the civil war and intervention in the Far East, ended with the defeat of the Japanese troops, who in 1922 were forced to leave Primorye, and in 1925 to evacuate their military units from the territory of Northern Sakhalin and to normalize the Soviet Japanese relations.

Securing the border of the USSR with Japan without losing new territories was a great victory for our country, which managed to exploit the contradictions between the interests of Japan and the USA in this region.

However, the establishment of diplomatic relations between the Soviet Union and the Land of the Rising Sun did not mean that Japan had abandoned plans to revise its borders with the USSR. So, back in 1924-1926, one of the leading ideologists of Japanese expansionism, the chairman of the board of the South Manchurian Railway, Syun'ei Okawa, who was actively supported by the leadership of the General Staff of the Japanese army, suggested the need to seize Siberia.

Under the influence of these views, Japanese Prime Minister Giichi Tanaka, at an 1927 conference on the problems of the East (Tokho Kaygi), formed the principles of "active politics" primarily in relation to Asian countries, the ultimate goal of which was to conquer world domination. The essence of this policy was set forth in the so-called “Tanaka memorandum”, which provided for an armed clash with the USSR.

After a provocative blast by the Japanese in the Mukden area of ​​the South Manchurian Railway, leased from China, troops of the Land of the Rising Sun in 1931-1932 years under the pretext of self-defense seized Manchuria. Where, with the tacit consent of the countries of the West, they created a springboard to prepare for an attack on the USSR, China and the Mongolian People's Republic. Shortly after the invasion of Manchuria began, the Japanese attempted to inject capital into the economy of North Sakhalin, where Japan retained the right to oil and coal concessions based on the decisions of the Portsmouth Peace Treaty of 1905. In 1935, the country's prime minister, Koki Hirota, directly raised the question to the USSR about selling Japan the northern part of Fr. Sakhalin.

In the 1933 year, at a meeting of prefectural governors, the Minister of War, General Sadao Araki, said that a clash between Japan and the USSR was unavoidable, while for Japan it was vital to capture the territories of Primorye, Transbaikalia and Siberia. Thus, a policy was formulated regarding our country, which was an integral part of the definition of “national defense” adopted by the cabinet of Makoto Saito. In the same year, violating the Washington International Treaty on the Limitation of the Sea Weapons 1922 of the year, according to which the Kuriles were incorporated into the demilitarized zone of the Pacific Ocean, Japan, secretly from other countries, began the construction of military facilities on these islands. In 1934, the country officially abandoned its international commitments at the Washington Conference in 1922. And in 1936, the Japanese press acknowledged the fact of militarization of the Kuril Islands. 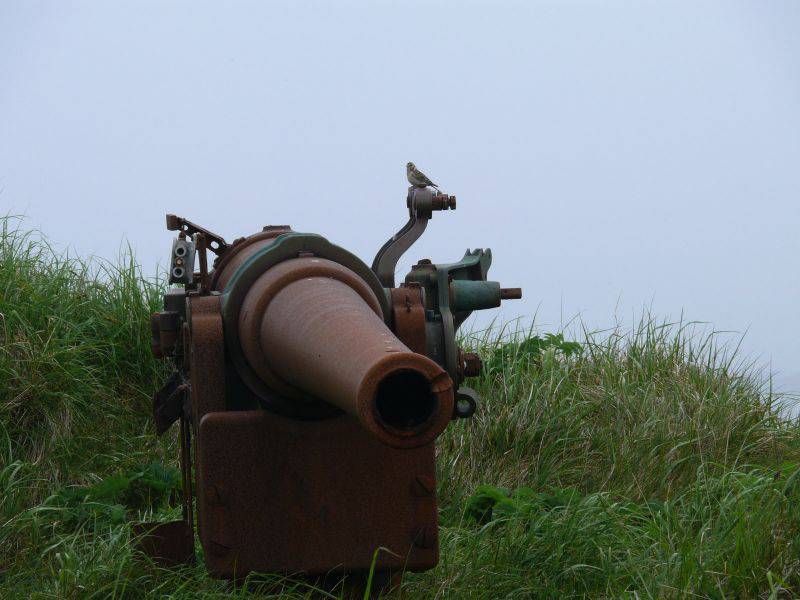 24 July 1939, admiral Mitsumasa Yonaia, the future head of government, announced his readiness to send a military squadron to the shores of North Sakhalin. In 1936, Japan concluded the “Anti-Comintern Pact” with fascist Germany, and in 1940 of the year with Germany and Italy the pact of the three powers with the aim of joint military actions against the Soviet Union and other states. The Soviet government at that time did everything possible to prevent a war with Japan. Since 1931, our country has repeatedly proposed to conclude a non-aggression pact, but under various pretexts Tokyo has declined to do so. Only after the conclusion of such a pact with Germany in the summer of 1939 and the defeat on the Khalkhin-Gol River did Japan sign the Soviet-Japanese neutrality pact on the initiative of the USSR.

In making this proposal, the Soviet Union hoped that such a document could play a role in international affairs. Article No. 2 of the treaty stated: “In the event that one of the contracting parties becomes the object of military actions by one or several third powers, the other party will maintain neutrality during the whole conflict”. Such a formulation imposed international legal restrictions on a potential aggressor. 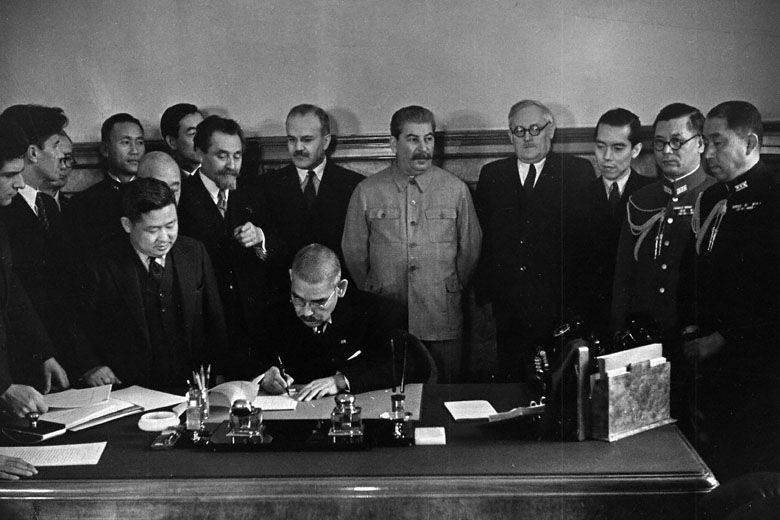 During the negotiations on the conclusion of this document, V. M. Molotov raised before the Japanese side the question of revising, based on the interests of the good neighborliness, of some unfair articles of the Portsmouth Peace Treaty of 1905. So, on November 18 1940, the Ambassador of Japan to the USSR Yoshitsugu Tatekawa, was made an official offer to return all the Kuril Islands to Russia. Somewhat later, in particular, during meetings with the Foreign Minister of Japan Yosuke Matsuoka, which took place in Moscow on 7, 9 and 11 on April 1941, about restoring our country's rights to southern Sakhalin. In return, the Japanese minister, for his part, offered to sell North Sakhalin to Japan, but this demarche was set aside by the Soviet side as frivolous.

During the preparation and conduct of direct aggression against the USSR in 1938-1940 and later, after the signing of the neutrality pact, the Japanese began to pay more attention to South Sakhalin and the Kuril Islands as a springboard for attacking the USSR and military bases at sea against the US .

In 1939-1941 in Forndzava, bordering the USSR region of South Sakhalin, fortification works were carried out and shock units were placed along the border. In October 1940, new military engineering works were started in the ports and airfields of the Kuril Islands. Then, a detachment of 87 men from the 70 division, stationed in Asahigawa (Hokkaido Island), and 1,5 thousand workers for the construction of military facilities was sent to Paramushir (the largest island of the northern part of the Kuriles). In September, the 1941 of the year more than the 20 infantry battalions arrived at the Shum-Shu island closest to Kamchatka, as well as the islands of Onekotan, Matua, Urup and Iturup. By May 1944, the total number of Japanese troops in the northern part of the Kuriles was 43 thousand people, and by the end of 1944 th on Southern Sakhalin - 20 thousand people. These troops were subordinated to the headquarters of the newly created army of the northern military district, located in Sapporo (Hokkaido Island). 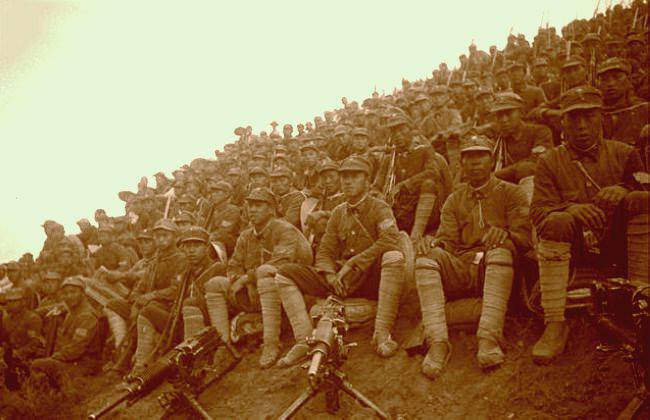 After the start of World War II, they were brought to full alert for the capture of Primorye, Amur, Northern Sakhalin and Kamchatka. The General Staff of the Japanese Army planned to launch an offensive in the near future. Naval bases were established on the islands of Shumshu, Paramushir and Iturup. But the military defeats of the Germans near Moscow, Stalingrad and Kursk forced Japan to abandon the attack on the USSR.

These islands, especially the Kuril Islands, played an extremely important role in military operations conducted against the United States. So, the main forces of the Japanese were concentrated on Iturup fleetwhich made a well-known attack on Pearl Harbor in December 1941, and the troops stationed in the northern part of the Kuril Islands were used to occupy the islands of Attu and Kyska (Western Aleuts) in June 1942. After the destruction of these parts by the Americans in June 1943, their previous positions in the Northern Kuril Islands were taken by Japanese troops, which had previously been deployed along the Soviet border on southern Sakhalin.

Along with the preparations for the forcible revision of the Soviet-Japanese border in the early forties, the Japanese side led, in essence, an undeclared war with our country. In 1941-1945, Soviet territorial waters were blocked, 18 was sunk and 178 civilian ships were detained, 779 provocations were committed on the USSR land borders and 433 was violated by the USSR airspace.

The agreement signed by the leaders of the USSR, Britain and the United States indicated that two or three months after the end of the war in Europe, our country pledged to go to war with Japan on the side of the allies, provided that the southern part of the territories was Fr. Sakhalin and all the islands adjacent to it are returned to the USSR. The Kuril Islands surrender to the Soviet Union. Recall that the wording “to return” the South Sakhalin to the USSR and “give back” the Kuril Islands was explained by the difference in the conditions of exclusion of these territories from Russia.

It is worth noting that the agreements concluded between the allies in the anti-fascist coalition were not isolated decisions, but were a development of a coordinated line of conduct with respect to the Axis powers. Therefore, the declaration was based on previously signed documents, primarily from the Cairo Declaration and the Yalta Agreement. But, since in the most general and principled form the position of the allies on the territorial issue with Japan was formulated in the Cairo Declaration, the Potsdam Declaration of July 26 1945 indicated that the provisions of the Cairo Declaration are subject to implementation and Japanese sovereignty is subject to limitation by the Honshu, Hokkaido, Kyushu Islands, Shikoku and the smaller islands that were listed there.

Referring to the Yalta Agreement, the Soviet side achieved that the smaller islands of South Sakhalin and the Kurile Islands were not included. Sakhalin also fell under Japan’s sovereignty, as it exceeded the size of some of the main Japanese islands.

By signing the act of unconditional surrender, which stated that “the Japanese government and its successors will honestly fulfill the conditions of the Potsdam Declaration”, Japan thus agreed with the decision of the Allies to return the South Sakhalin and the Kuril Islands to the USSR. 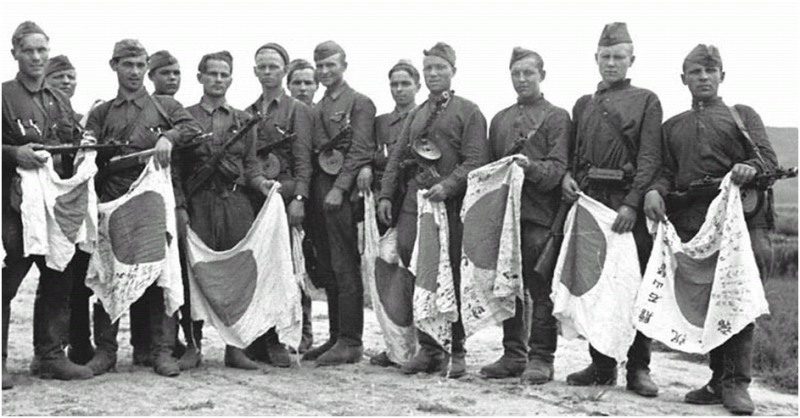 Complying with the decisions of the treaty with the allies, 9 August 1945, our country declared war on Japan. Soviet troops and navy defeated the Kwantung Army. After persistent battles, South Sakhalin and the Kurile Islands were liberated, thereby eliminating a dangerous foothold on the far eastern borders of our homeland. Considering the further development of the US-Japanese relations, it is possible to assert with confidence that these territories, if they remained under the sovereignty of Japan, in the post-war years the USA would be used for similar aggressive purposes.

Ctrl Enter
Noticed oshЫbku Highlight text and press. Ctrl + Enter
We are
Diplomats of the People's Commissariat of Defense: on the eve and during the warWhy there is no peace treaty with Japan
Military Reviewin Yandex News
Military Reviewin Google News
19 comments
Information
Dear reader, to leave comments on the publication, you must to register.